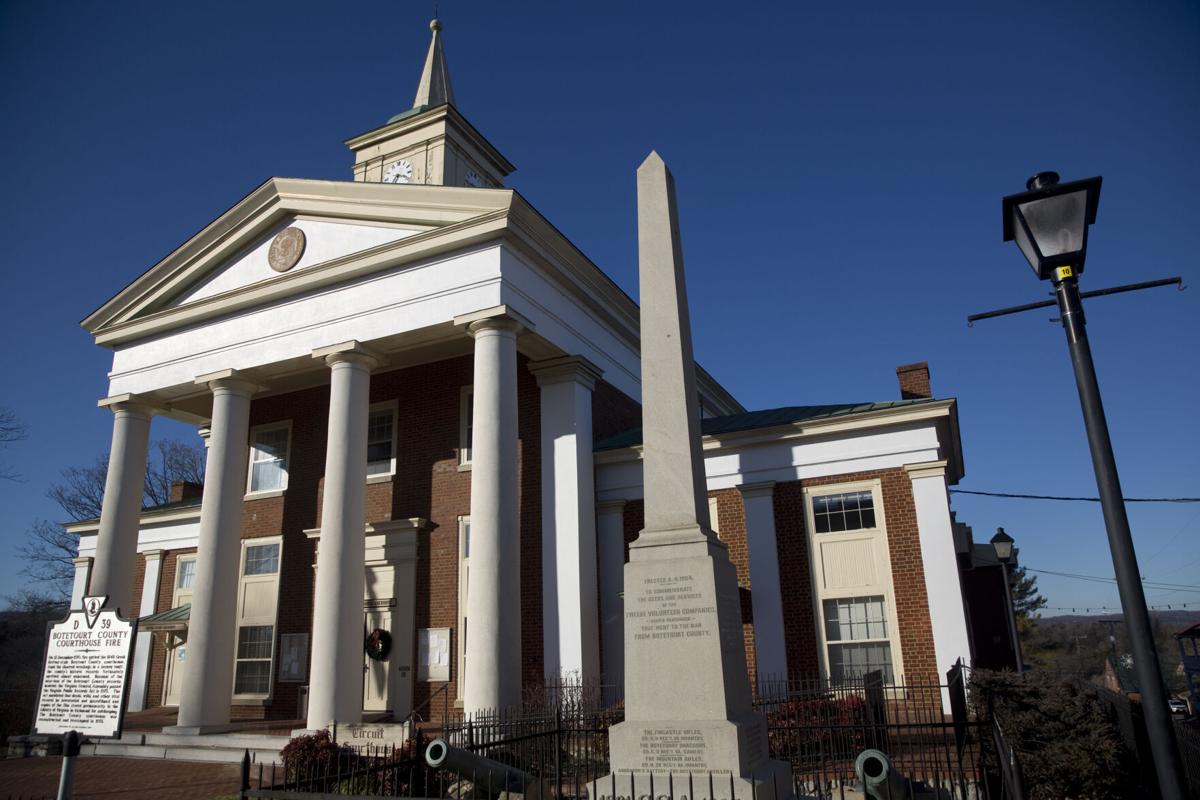 The Confederate monument in front of Botetourt County Courthouse. A county committee will recommend that it be moved so that it is not directly in front of the courthouse. 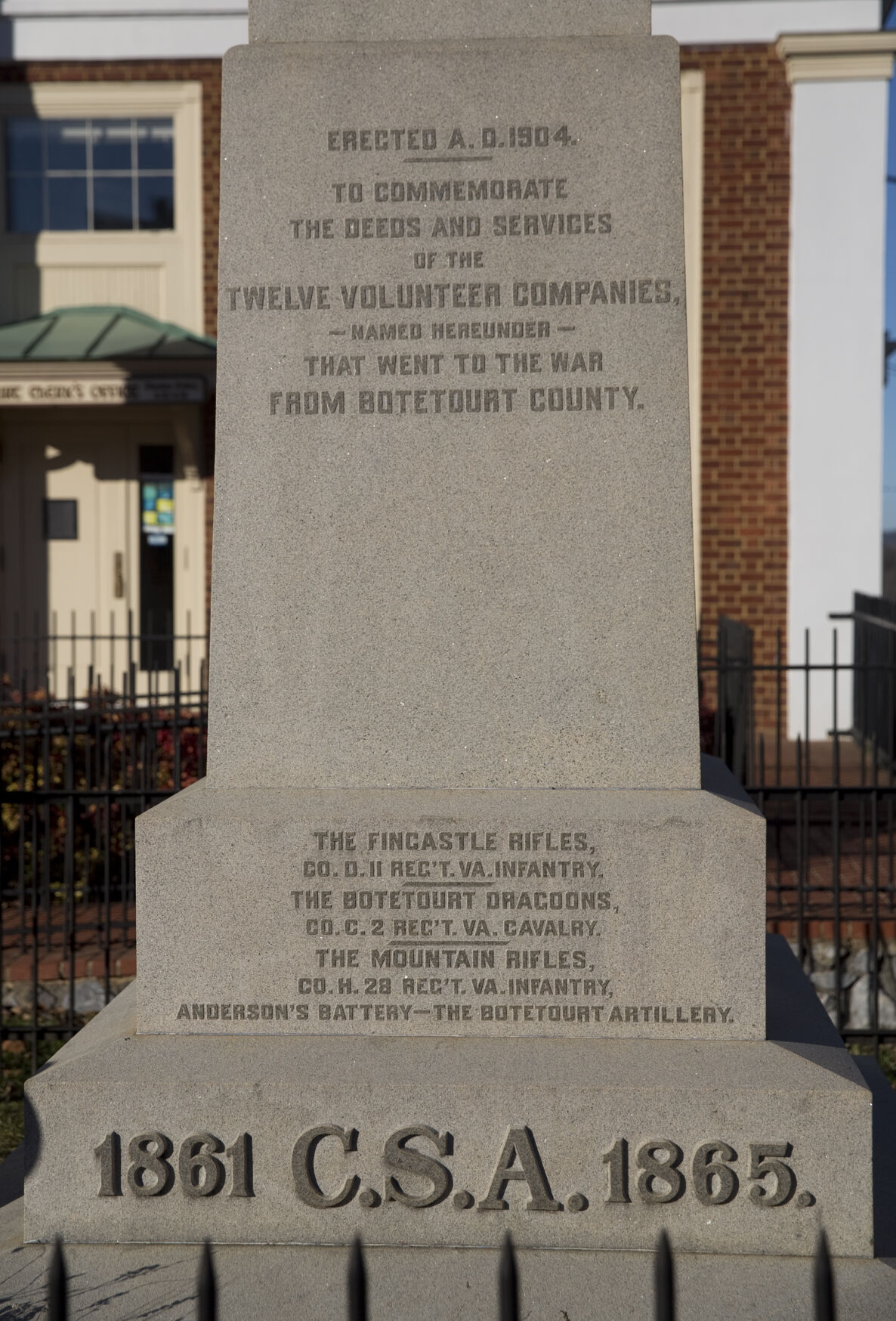 The Confederate monument in front of Botetourt County Courthouse was erected to honor the county’s 12 volunteer companies and the women who supported them.

In 1903, the Botetourt County Board of Supervisors responded to a Southern movement to honor the Civil War’s Confederate veterans. It approved a monument to the county’s 12 volunteer companies and the women who supported them.

The obelisk went up the next year, in front of the county courthouse.

In 2020, the Botetourt County Board of Supervisors responded to a nationwide movement to remove such monuments. It created a committee of 16 county residents to ponder the landmark’s future.

On Thursday, the Monuments and Memorials Committee approved a report to the supervisors that will recommend moving the obelisk. It would still wind up near the courthouse in Fincastle, though no longer out front. The board of supervisors will hear from the committee on Jan. 26 before making a final decision.

Where the obelisk would go, exactly, is an open question for now, as the courthouse and possibly its surrounding buildings are due for major renovations. The county has hired an architectural company, and the committee will work with that firm to propose its ultimate location.

Amsterdam District Supervisor Steve Clinton, whom the board selected to assemble the Monuments and Memorials Committee, said that wherever it goes, he hopes that it will include a kiosk or other marker to provide historical information.

“Our intention is, it isn’t going to be in a place that is immediately visible but is certainly publicly accessible and inviting, and does create a place for contemplation and understanding,” Clinton, who is a non-voting member of the committee, said in an interview earlier this week.

The committee, which in the COVID-19 era has often met via video conferencing, has listened in several meetings to public comments for and against the move. Thursday’s remote meeting, which lasted about a half-hour, had only one agenda item: approval of the executive summary and recommendations, which committee members Ed McCoy and Beth Leffel wrote. Only one county resident, Ronald Shaver, spoke to the group on Thursday. He said that he believed the majority of county residents want it to stay, and the matter should be held to a referendum.

“It is very near and close to heart to a lot of people,” Shaver said. “I hope you think it through before you destroy a part of American history, in Botetourt County.”

The committee was not recommending its destruction, Clinton replied, adding that he thinks that people will ultimately be pleased.

The 14 voting members came to the committee from multiple sides of the issue, but the majority coalesced around respect for those for whom the monument evokes negative feelings, he said in the Monday interview. Even in a referendum, if county voters had elected to move it, the question of “where” would remain, he said. Yet the group felt that a referendum’s outcome would favor leaving the monument in place.

“That circuit court building is supposed to represent equality and fairness, and to have a monument that glorifies a regime that didn’t practice equality and fairness for all people is just incongruous,” Clinton said of the committee’s deliberations. “It didn’t make sense to do that.”

The committee determined, too, that the spire wasn’t so militaristic as to feel oppressive in this era.

Clinton said that “visually, it isn’t about conquest … like Robert E. Lee on his horse. So that makes it probably less offensive to people who do take offense to the Civil War monuments. It’s a little bit quieter in some respects than a lot of them. That plus the mention of the families, in the committee’s opinion, made it less onerous.”

The monument’s inscription notes county women’s support during the “dark reconstruction years.” A history-gathering subcommittee, which retired Fincastle newspaperman McCoy led, did not find much information on that postbellum era, committee minutes showed. Clinton said he hopes the group learns more and is able to present it for context with the monument.

The group began meeting in September. It included representatives from county organizations including the town of Fincastle, the county’s historical society and museum (located behind the courthouse), the Black history-centric County-Wide League, the Sons of Confederate Veterans Botetourt Artillery and the Daughters of the Confederacy. They brought a wide variety of opinions but debated respectfully, Clinton said. Two committee members even polled classes at the county’s two high schools, to gauge their opinions.

Multiple sites throughout the county came up for discussion, including Fincastle’s Big Spring Park. But the Fincastle Town Council was formulating plans that didn’t include the monument, and thought it best that it remain a part of the courthouse area, nearer the museum, committee minutes showed. Other sites proved unsuitable as well, the committee decided.

The term “Courthouse Square” emerged in the meetings. Back Street, Roanoke Street, Main Street and U.S. 220 are its borders. The committee decided that was the best quadrant for the monument. The cannons positioned next to the pillar would come with it.

Eight voting members were present and opted unanimously in favor of the summary and recommendations. Clinton encouraged members to be at the supervisors’ meeting on the 26th. They may attend in person, or via video conference, he said. Leffel, the committee’s secretary, will present the report to the supervisors.

“I’m hoping to be there in person,” Botetourt Artillery representative Lewis Sifford said, thanking McCoy and Leffel for their extra work. “I think we’ve done a good job.”

The committee organized by Botetourt Supervisor Steve Clinton intends to make recommendations in January as to where the obelisk could be moved, where the funds for a move would come from and what other historical displays might accompany it.

Botetourt County Supervisor Steve Clinton will from a committee to seek input on the county's Confederate markers.

Movies in a Minute: "The Little Things"

The Confederate monument in front of Botetourt County Courthouse. A county committee will recommend that it be moved so that it is not directly in front of the courthouse.

The Confederate monument in front of Botetourt County Courthouse was erected to honor the county’s 12 volunteer companies and the women who supported them.