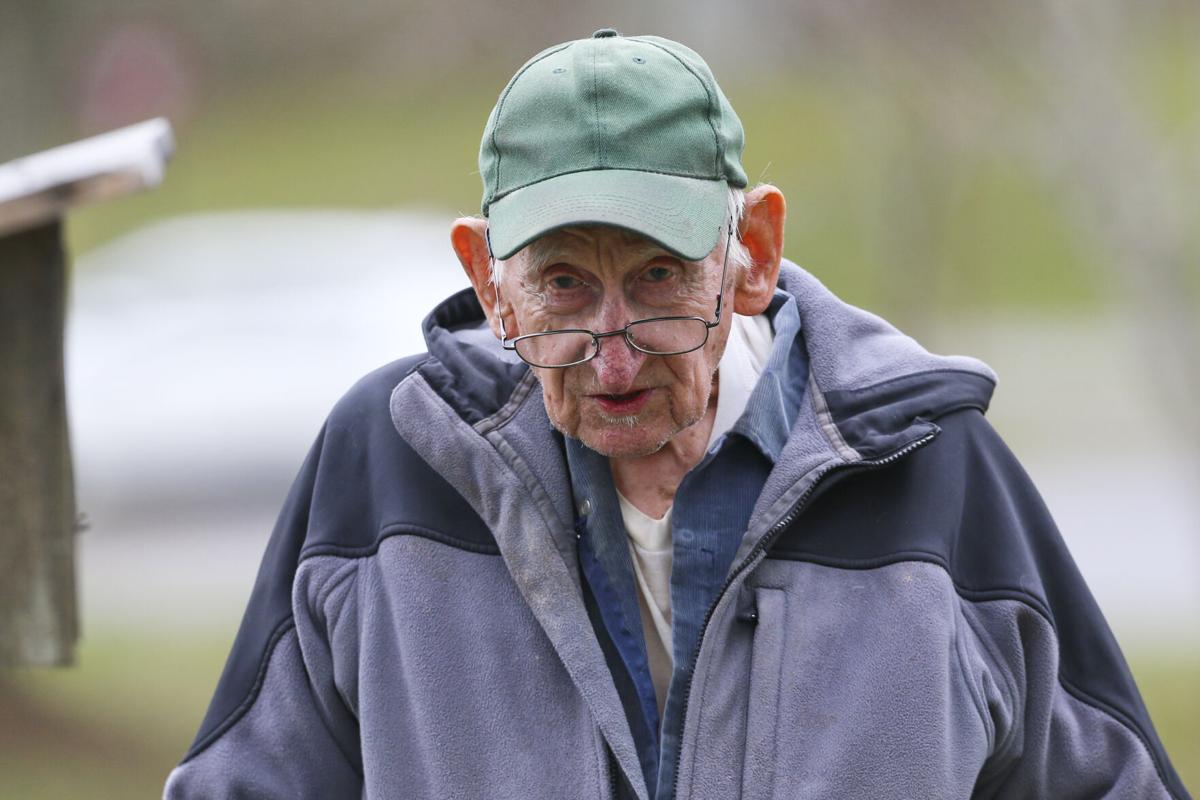 Carl Hansen, 91, starts walking his bluebird trails around mid-March, meticulously recording information on nests, eggs, nestlings, weather and anything else of interest he observes.

A male, left, and female bluebird perch on a soccer goal while foraging for insects in Bisset Park. Bluebirds, who overwinter locally, are the first to build nests in late March or early April. 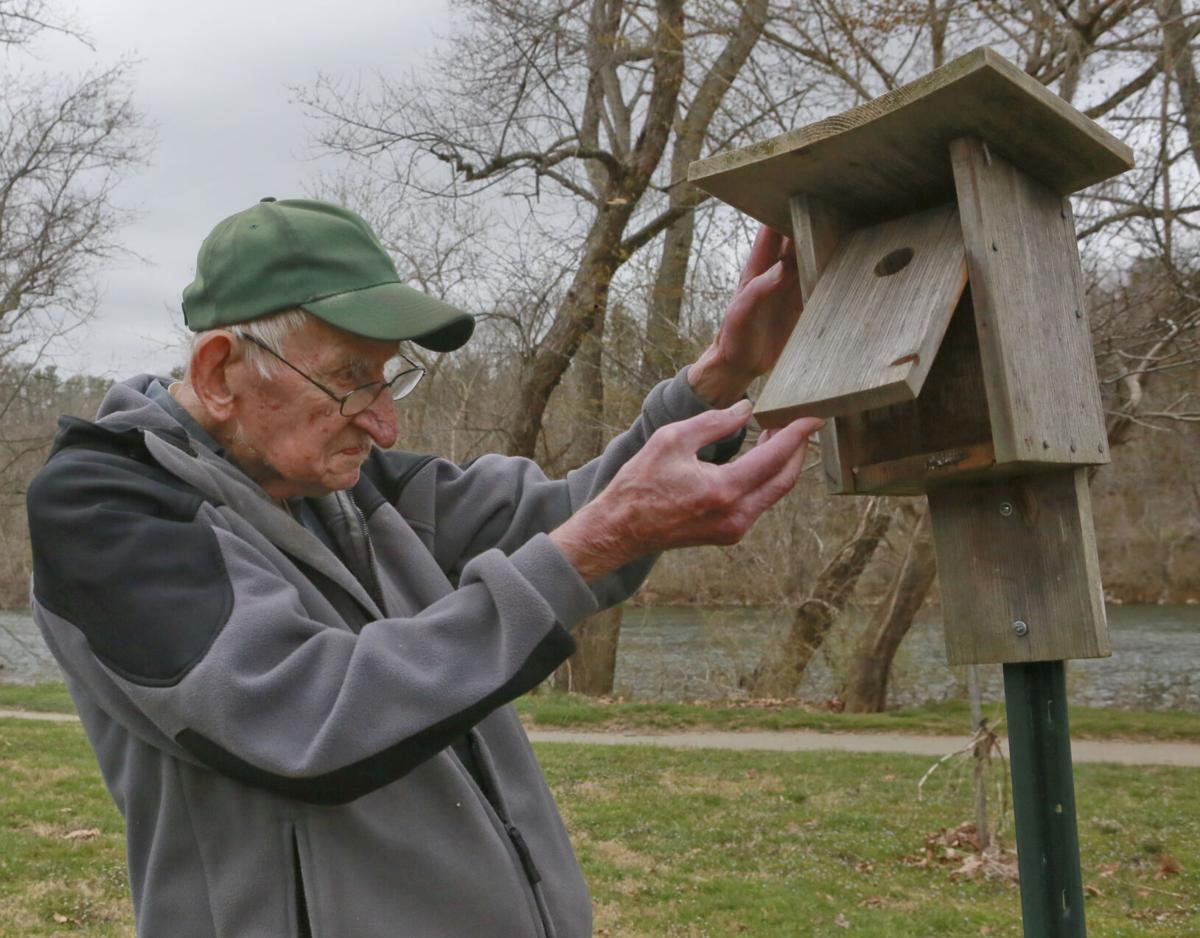 Carl Hansen checks a Bisset Park birdhouse for nesting activity. It’s one of some 500 bluebird houses he has built. 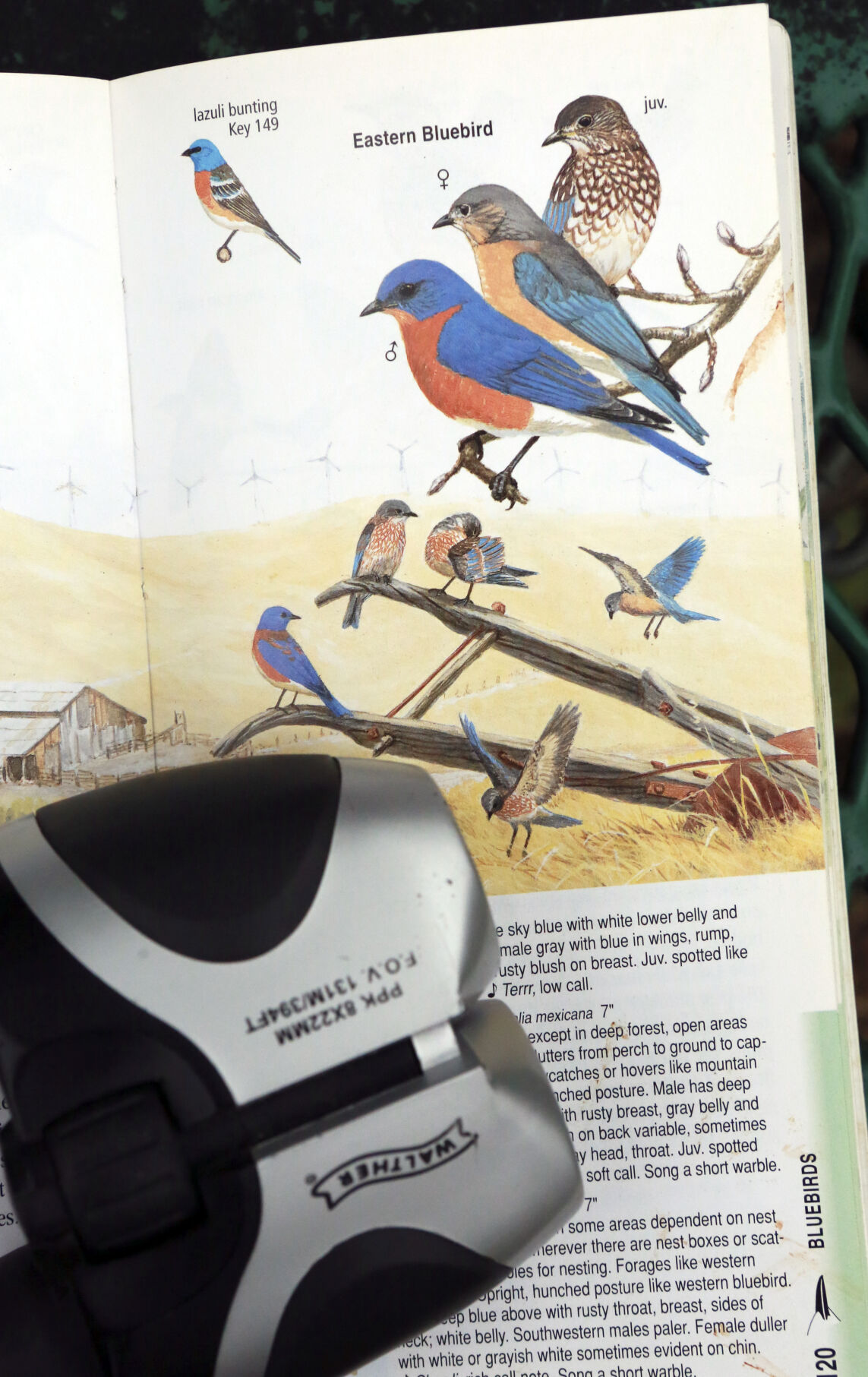 Carl Hansen keeps his eyes and ears open for the low-pitched chur-wee of the bluebird’s call in early spring and through the summer.

RADFORD — Every spring for the past 15 years, Carl Hansen starts walking his bluebird trails around March 14. These are four-hour hikes – no leisurely strolls for this 91-year-old.

As he goes out into the greening landscape, Hansen is focused on one thing: the contents of some 500 bluebird houses he’s built. Sunday through Thursday mornings he hikes the nearly a dozen trails he’s populated with nesting boxes, visiting each box once a week until mid-September. He meticulously records information on nests, eggs, nestlings, weather and anything else of interest.

Hansen dresses in “bluebird” blue for monitoring walks, part of his process of attuning himself to the birds, he says. He keeps his eyes open for subtle changes in the setting and his ears open for the low-pitched chur-wee of the bluebird’s call.

He’s not sure how many miles he walks – quite a few since nests for the territorial birds must be a good distance apart – but he wears out a pair of muck boots every year.

“Thus far I have recorded 3,000-plus bluebirds and more than 4,000 tree swallows, as well as some house wrens,” Hansen said. “I keep individual records on each box as an Excel file and then prepare PowerPoint presentations based on the analyzed data. It keeps me off the streets.”

While Hansen likes being engaged with nature, he says he may be “operating under false cover” for folks who think he’s motivated solely by a devotion to bluebirds.

“I realized early on this could be a big interesting project,” Hansen said. “It’s not just checking boxes, not just counting birds. I saw I could study the effect of long-term environmental change and habitat on species distribution. If you don’t understand environmental change, you can’t plan for it.”

In other words, he’s looking at how the bluebird and swallow populations are changing and trying to figure out why; it seems related to weather events.

When Hansen retired after four decades as a geneticist with the National Institutes of Health in Bethesda, Maryland, he moved to Radford near family. He had no idea what he’d do. But goal-oriented Hansen soon developed plans.

“I attended a Pathways for Radford meeting in 2006, and when Wilson Rankin asked for a volunteer to monitor bluebird houses in Bisset Park, my hand went up,” Hansen said. “I saw the research potential in this project.”

Hansen has since created many more bluebird box trails, most in rural areas of Pulaski and Montgomery counties. He invested more than $1,000 building nesting boxes and repairing damaged ones. His zeal for the project surprised even Rankin, a bird lover.

“In 2006 I needed help monitoring a bluebird trail I built, maybe 12 boxes. Carl took to it like a duck to water and soon did all the work,” Rankin said. “Now he’s also monitoring bluebird trails he’s started at Selu Conservancy and all over. He stays as fit as a fiddle.”

“I like building trails on private property,” Hansen said. “People don’t bother the boxes. At Bisset Park I clean out Saltines, wood shavings, and other trash people have stuffed in the nesting boxes.”

Hansen says the bluebirds, who overwinter here, are the first to build nests in his birdhouses – in late March or early April. Tree swallows, who migrate to the Gulf Coast for winter, start nesting in early May, about the time bluebird fledglings leave the boxes.

“I clean out the nesting box as soon as one species is done in preparation for others,” Hansen said. “Bluebirds often have a second brood in June.”

Occasionally house wrens claim some boxes. He doesn’t evict them. Hansen just records the data and looks at the broader picture, wondering why bluebirds stopped nesting in an area or why some abandoned their nests.

“That’s what drives me – interesting problems,” Hansen said. “My 15 years of data is becoming useful at this point. Long-range comparisons can be made.”

In 2016, something happened to the bluebirds, Hansen says. Their reproduction fell way off and has remained lower ever since. Hansen thinks lengthy cold rains in May and June of 2016 caused a majority of the hatchlings to die of hypothermia.

The tree swallows took a hit last year. Again Hansen looks to unseasonable precipitation as a culprit. Now he’s concerned a winter cold snap along the Gulf of Mexico further diminished their numbers.

“Weather has a big impact,” he said. “But there’s a huge number of unknowns affecting the birds – the insect population, changes in habitat, etc. It makes you humble. If you think you understand what’s going on, something changes and you find yourself back at square one.”

Hansen holds a Ph.D. in genetics. After studying animal husbandry at Colorado State he started a farm, but went broke. So he pivoted into genetics and medical research.

Hansen has collaborated with Radford University faculty and set up a cooperative relationship with a Virginia Tech researcher, but the pandemic stymied that project. For a year he regularly shipped boxes of abandoned bird nests to a University of Rochester parasitologist to be analyzed for a bot fly parasite.

But most of the time Hansen works alone, walking up and down the fence lines inspecting nesting boxes, checking the weather here and along the Gulf Coast where the swallows are starting their migration.

Carl Hansen, 91, starts walking his bluebird trails around mid-March, meticulously recording information on nests, eggs, nestlings, weather and anything else of interest he observes.

A male, left, and female bluebird perch on a soccer goal while foraging for insects in Bisset Park. Bluebirds, who overwinter locally, are the first to build nests in late March or early April.

Carl Hansen checks a Bisset Park birdhouse for nesting activity. It’s one of some 500 bluebird houses he has built.

Carl Hansen keeps his eyes and ears open for the low-pitched chur-wee of the bluebird’s call in early spring and through the summer.