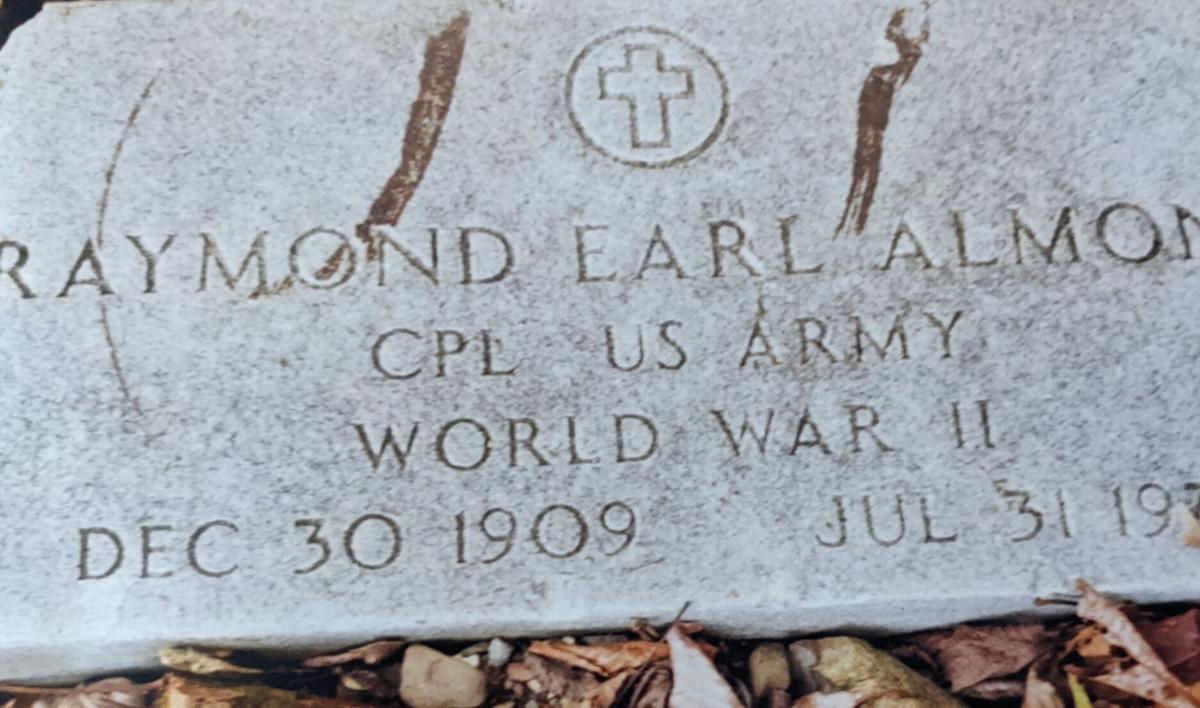 A grave marker for Raymond Earl Almond of Roanoke, who died in 1979. Barbara Hightower, who lives in Lancaster, Ohio, found it buried in a creek bank in Union, West Virginia, last October. She later learned a nearly identical marker is on Almond’s grave at Fair View Cemetery on Melrose Avenue. | 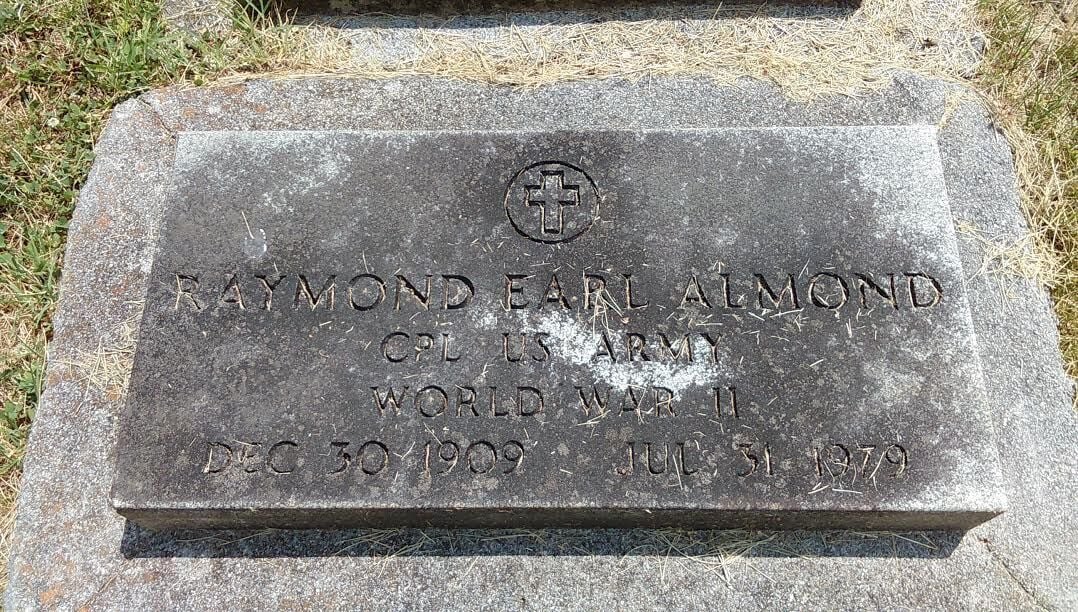 Today we have a mystery, discovered last fall in southeastern West Virginia by a woman from Ohio. It involves a grave marker for a World War II veteran, Raymond Earl Almond. He was 70 when he died in 1979.

Almond was from Roanoke. He served in the U.S. Army and rose to the rank of corporal. Based on his birth year — 1909 — he would have been in his 30s by the time the U.S. entered World War II. His remains are buried at Fair View Cemetery on Melrose Avenue. His grave marker is there, too.

Why then is another one bearing his name and other information stuck in a creek bank, near a bed and breakfast in Union, West Virginia? And how the heck did it get there?

Barbara Hall Hightower, who lives in the small city of Lancaster (southeast of Columbus) would like some answers. So far, I’ve been able to gather few.

Hightower, a retired art teacher, wrote me about Almond’s grave marker in May. Her letter was distinctive for a number of reasons, including penmanship so perfect the thing could have been typed. (Turns out, one of the arts she taught was calligraphy.)

Anyway, in October, she and her sisters visited Union, West Virginia, which according to the 2010 census has a population of 565. It’s the seat of Monroe County, and (as the crow flies) is roughly 15 miles due west of Paint Bank, in Craig County.

“We went there because that’s where my dad grew up,” Hightower told me in a later phone call.

They stayed at the Willow Bend Bed and Breakfast, a large, 1800s-era structure that stands on 160 acres. And while they were there, Hightower checked out a small creek less than 100 yards from the former farmhouse.

“A creek runs past the Willow Bend and in times of more or less rainfall the water level, of course, varies. In mid Oct. the creek was not at capacity,” she wrote.

“On the creek bank there was a headstone. It was in the creek but not submerged. There is no grave there. Apparently, it has been there for quite some time.

“I felt that any family members still around would want to know what happened to the gravestone,” Hightower wrote.

In our phone call, she described the marker as roughly 2-1/2 to 3 feet wide, about 18 inches tall and a foot thick. She had included a photo with her letter.

Before she wrote, Hightower did a bit of research on Almond. She learned he was buried at Fair View, so she called the cemetery. Its director of family services, Nihkolas Tipton, assured her Almond’s marker was still in Fair View cemetery.

A cemetery official told me that same thing when I called in July.

“The grave is currently marked with a marker, as it should be,” cemetery President Myrteen Heslep told me. Moreover, “we do our own [grave marker] ordering, and we have records,” Heslep added.

Almond’s marker, she added, was paid for by the U.S. Veterans Administration. Fair View has no records indicating it ordered two markers, she said.

“I don’t think the VA would have paid for two,” Heslep added. She declined to tell me when the marker was ordered, or from whom, saying that was information the cemetery would divulge only to members of Almond’s family.

In her letter, Hightower raised the possibility that the Flood of ‘85 could have moved Almond’s gravestone. But that seems highly unlikely for reasons of both geography and a branch of physics known as fluid dynamics.

The Flood of ‘85 drained to the south and east of Roanoke, while Union (as the crow flies) is about 40 miles northwest. In between are some tall mountains. And besides that, Union’s elevation is 2,073 feet, which is more than 1,200 feet higher than Roanoke’s.

Major floods can do many strange things — but they cannot transport granite tombstones that weigh hundreds of pounds to elevations 1,200 feet higher in the opposite direction as floodwaters flow.

Moreover, there’s a photo of Almond’s grave marker in Fair View online, at a website called Findagrave.com. It was snapped in 2015 — 30 years after the flood — by a local woman named Amanda Bishop Burns. She gave written permission to republish it in this newspaper.

So it seems we have two separate tombstones. And that raises the question, why?

The next person I talked to was Sammie Oakey, president of Oakey’s Funeral Service and Crematory. I called him after I dug up Almond’s 1979 death notice in The Roanoke Times. It indicated that Oakey’s Vinton Chapel had handled Raymond Almond’s funeral.

Raymond Almond had a wife, Irene Almond Mills, who preceded him in death. They had a son, Earl Wayne Almond — who died in 2017. It just so happens that Oakey’s handled Earl’s funeral, too. Oakey said he would contact Earl’s family members on my behalf and try to get them to call me.

Oakey said he left two messages, but they never reached out to me.

Oakey told me it’s not unheard of for engravers to make a mistake while preparing a grave marker, and discard the erroneous one. But there are no differences in spelling, symbols or dates between the two markers. So it’s doubtful that explains how there could be two for Raymond Almond.

The last person I contacted trying to solve this riddle was Vips Alpizar, the owner of Willow Bend Bed and Breakfast. She told me she bought the rundown farmhouse 20 years ago and has been restoring it for most of the time since.

Almond’s marker has been on her property since she bought the place, Alpizar said.

“It was in a pile of rocks,” Alpizar said. “I didn’t even know it was there until we moved the rocks years later.”

Alpizar added an interesting footnote: Almond’s grave marker wasn’t the only discarded cemetery item she found on the farmhouse property. There were a bunch of other stone and concrete items, she added, but those appeared to be cemetery decorations.

None of them was engraved with names or dates, as with Almond’s grave marker.

Alpizar told me she bought Willow Bend from a woman named Georgia Brown. And Georgia Brown, Alpizar added, lives in Salem. The farmhouse had been owned by Georgia’s deceased husband, Joe Brown, and previously his father, Buster Brown. (Willow Bend’s address is on Buster Brown Road in Union.)

So I called Georgia Brown, who recalled selling Willow Bend to Alpizar. But “I know absolutely nothing about a headstone,” she told me.

And that’s where — at least so far — our mystery ends.

Who made the marker on Almond’s grave? Who made the one in that West Virginia creek bank, which has identical letters, numbers and symbols?

And why are there two? And how did the latter marker end up in Union?

“It just doesn’t make any sense to me,” Alpizar said.

If you have a clue, please drop me an email or give me a call. Perhaps we can solve the mystery.

In a written objection, the defense said it was told by federal Judge Elizabeth Dillon to make its arguments while she was out of the courtroom -- denying it the right to be heard.

A grave marker for Raymond Earl Almond of Roanoke, who died in 1979. Barbara Hightower, who lives in Lancaster, Ohio, found it buried in a creek bank in Union, West Virginia, last October. She later learned a nearly identical marker is on Almond’s grave at Fair View Cemetery on Melrose Avenue. |