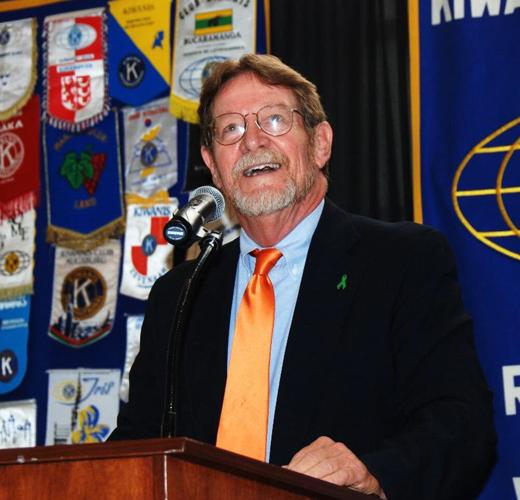 Dan Smith, 75, speaks to the Roanoke Kiwanis Club. The Roanoke City Council will honor him Monday for his 50 years worth of contributions to Roanoke Valley journalism. 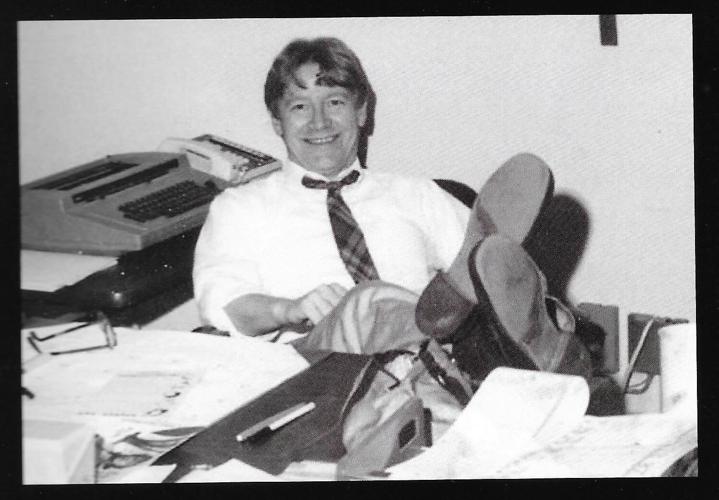 Dan Smith in the 1980s, when he was editor of the Salem Times-Register. 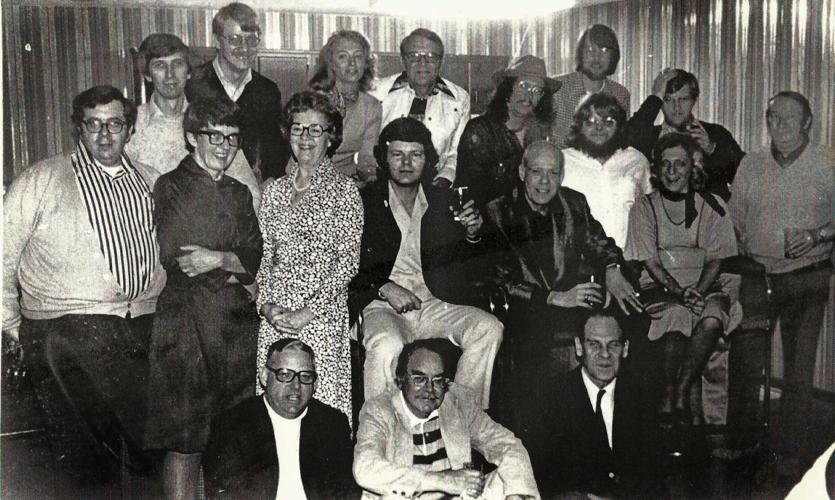 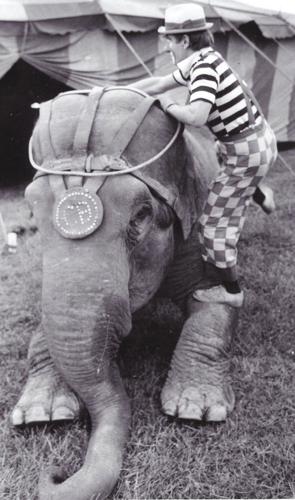 Dan Smith, features writer for The Roanoke Times & World- News, dons face paint and a clown costume for an elephant ride to promote the circus coming to town in 1979.

Fresh out of high school in western North Carolina, 17-year-old Dan Smith needed a job. That May, he landed one at King Arthur’s Roundtable, a burger-and-barbecue joint in Asheville.

“They had really, really good barbecue. I know because I made it,” the now 75-year-old recalled with characteristic modesty.

The year was 1964 and to the newly minted grad, the future looked wide open. But his mom, widowed four years earlier and left with eight offspring to raise, was less than enamored by his choice of employment. Restaurants were the same path Smith’s dad had embarked on — and he’d died at 50.

Smith had been working a couple of months at King Arthur’s when one day that August, his mom asked, “You’re not going to make that a career, are you?”

“I said, ‘I hadn’t thought about a career,’” Smith recalled. “She said, ‘Why don’t you go down to the newspaper and see if you can get a job?’”

That afternoon, he visited The Asheville Citizen, the city’s morning paper. Smith didn’t know its sports department copy boy had moved over to news the day before, or that then-Sports Editor Bob Terrell was looking to fill the position.

“And Terrell said, ‘You’ve got that. Go over there and sit at that desk. We’ll find something for you to do.’”

At the time, Smith had no idea how to use a typewriter. He knew nothing about newspapers or journalism. He’d never passed a college course (something that remains true today, although he’s lectured for dozens).

“I knew nothing about anything,” Smith said.

Nevertheless, by 4 p.m., his days cooking barbecue were over. He was sitting at that newspaper desk, practice-plunking on a 1917 Royal typewriter. The pay was $5 per shift.

“I was starting at ground zero,” Smith told me. “A lot of people say I’m still there.”

Don’t tell that to the Roanoke City Council, however. At Monday’s meeting, the council’s scheduled to honor Smith by declaring Aug. 16 “Dan Smith Day in Roanoke.” The formal resolution marks the 50th anniversary of Smith writing or editing for publications in the Roanoke Valley.

Smith’s being honored here — in part — because he didn’t stay in Asheville too long. Within two years of taking that peon copy boy gig, he was sports editor of The Citizen’s sister newspaper, The Asheville Times.

Five years later, on Aug. 22, 1971, Smith landed in Roanoke. That happened after a cold call from Bill Brill, then sports editor of The Roanoke Times.

The two had never met or spoken. But Brill had heard good things about Smith from Bill Cate, a Roanoke Times sports columnist who’d worked with Smith in North Carolina.

“Brill called and asked if I’d accept a position as preps editor,” which oversaw high school sports coverage, Smith recalled. Brill’s offer was $110 per week, a 22% pay bump from the $90 salary Smith was earning.

After seven years in sports, Smith moved over to the features department at the recently combined Roanoke Times & World-News, a job he said was the most fun he’s ever had in journalism. There, he worked for Sandra Kelly, then features editor.

“It was loosey-goosey,” he recalled, an odd menagerie of pros and misfits who made the work fun and gave the newspaper a personality. “There were no tight butts there,” he said. And the pay and benefits made for a decent standard of living, too.

“None of us were bailing for Virginia Tech or Carilion, because we made enough money back then,” Smith. “We had so many honest-to-God characters hanging around the newsroom, it was amazing.”

Another difference between now and then: “People didn’t resist us doing our jobs. Nobody called us ‘enemies of the people.’ I admire the hell out of good reporters right now.”

“He was always enthusiastic,” Kelly said, recalling Smith as “a good-hearted person and a self-promoter to the nth degree.”

Among other qualities, Smith was game for stories that involved stunts, like dressing up in face paint and clown garb and riding an elephant when the circus came to town.

“He’s one of the fastest writers I’ve ever encountered,” Kelly added. “You’d give him a story idea and it seemed like he’d have it done in half an hour.”

“He hits his deadline before you give [the assignment] to him,” said Kurt Rheinheimer, longtime editor of The Roanoker magazine, for which Smith has been freelancing for about 15 years. Rheinheimer also called Smith “a generalist superb.”

“You can [assign] him a story in any realm. Whatever you need, he’ll go do it,” Rheinheimer said. “He’s kind of like the [baseball] utility infielder who’s underrated. He’s not your star first baseman, he’s not your star third baseman, but he can play all those positions well.”

Smith’s most memorable assignment in features was a phone interview with singer Dolly Parton, in advance of a concert she was doing in Roanoke.

He called Parton, “the sweetest and smartest woman I’ve ever interviewed. I fell in love with her talking on the phone.”

But it was a prank one of colleagues hatched during that interview that made it so unforgettable. The colleague was the late Chris Gladden, a reviewer with whom Smith was close.

While Smith was on the phone chatting with Parton, Gladden slipped a photograph of a well-endowed nude woman onto Smith’s desk, just under his nose.

After Kelly fired Smith in 1981 — “It wasn’t personal, I think Dan really wanted to be fired,” she said — Smith moved on to edit the weekly Vinton Messenger, and then other publications in the same chain, such as the Fincastle Herald, New Castle Record and Salem Times-Register.

The day he quit the Times-Register — “I think it was 1988,” Smith said — he got a call about editing the Blue Ridge Business Journal, then a fledging twice-monthly publication that had launched only a month earlier.

He remained in that position for 20 years, although precise dates are a bit hazy. Times-World Corp., the parent company of The Roanoke Times, bought the publication in 1997.

In 2008, Smith’s run at the Business Journal came to an end. Smith chalked that up to differences in direction he and then-General Manager Tom Field had with The Roanoke Times’ leadership. They quit and walked out the door. Times-World Corp. shut down the Business Journal in 2010.

He and Field formed their own magazine, Valley Business Front. It’s still being published, although Smith later sold his share to Field so he could so he could finish his first novel, “CLOG!”

Another proud moment came in 2010, when Smith was an inductee to the Virginia Communications Hall of Fame at Virginia Commonwealth University. More than 20 people wrote letters nominating him for that honor, he told me.

“How many of those did you write?” I asked him.

In between freelance gigs, these days Smith is writing books. He’s recently put the finishing touches on his second novel, “NEWS!”. It’s been picked up by Propertius Press, which Smith called “a small Southern publisher.” Smith expects the release to happen in the summer of 2022.

Like much fiction, it’s rooted in some actual events. The book is set in 1969, and as it begins, an airliner crashes at Asheville’s airport. A newspaper editor sends the entire staff out, thundering “I want copy! I want photographs! I want them as fast as possible!”

A young, wet-behind-the-ears sportswriter, Eb McCourry, returns with a hell of a story. His career and the novel’s plot takes off from there.

It sounds kind of familiar, eh?

Brian Vick was arrested this week on two dozen charges related to acts said to have occurred two decades ago.

In April 2021, Roanoke County Schools announced the formation of a new director of equity and engagement position. The position is now vacant …

Multiple vehicle crash reported on I-581

The Virginia Department of Transportation's traffic information website, 511virginia.org, reported the crash at the 0.8 mile marker, between O…

Shirley Klinger of Roanoke thought her November 2021 tendon surgery at Carilion Roanoke Memorial Hospital would be covered by Medicare. But af…

The reason China used a spy balloon to collect intelligence

Dan Smith, 75, speaks to the Roanoke Kiwanis Club. The Roanoke City Council will honor him Monday for his 50 years worth of contributions to Roanoke Valley journalism.

Dan Smith in the 1980s, when he was editor of the Salem Times-Register.

Dan Smith, features writer for The Roanoke Times & World- News, dons face paint and a clown costume for an elephant ride to promote the circus coming to town in 1979.