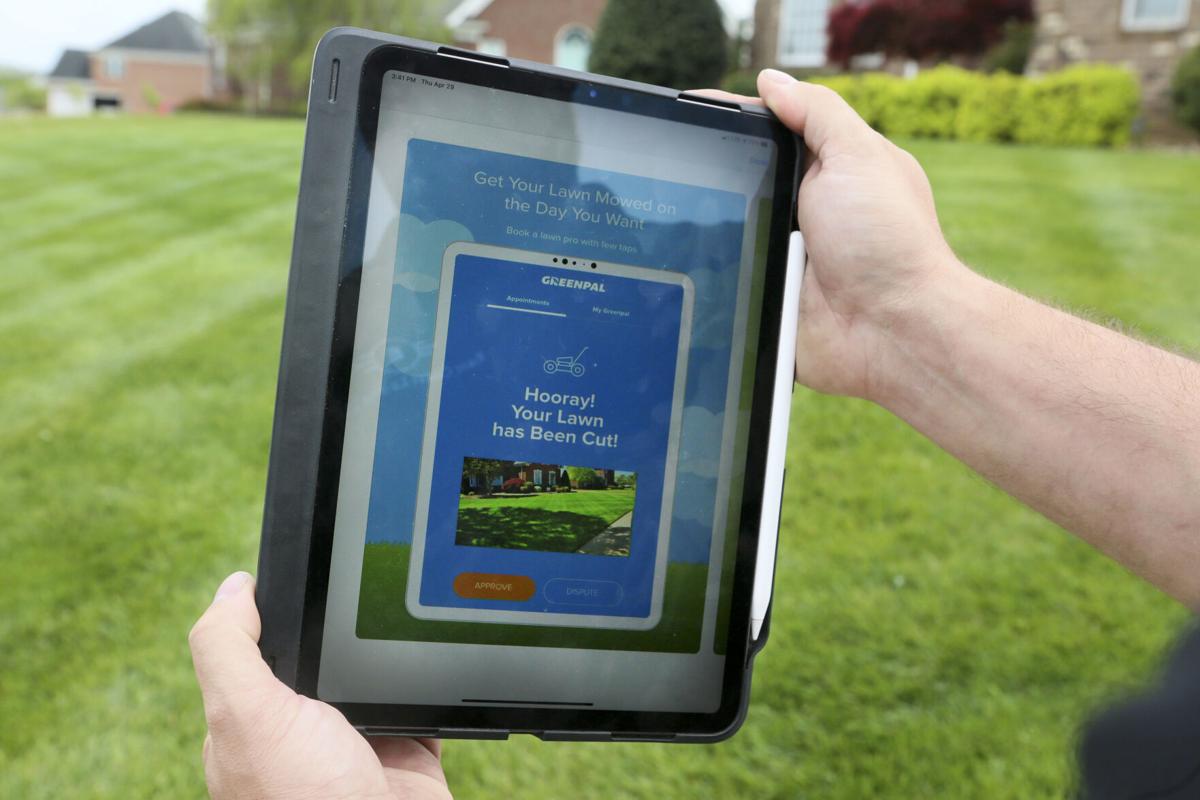 GreenPal is a lawn service comparison and booking app that has begun service in the Roanoke and New River Valleys. 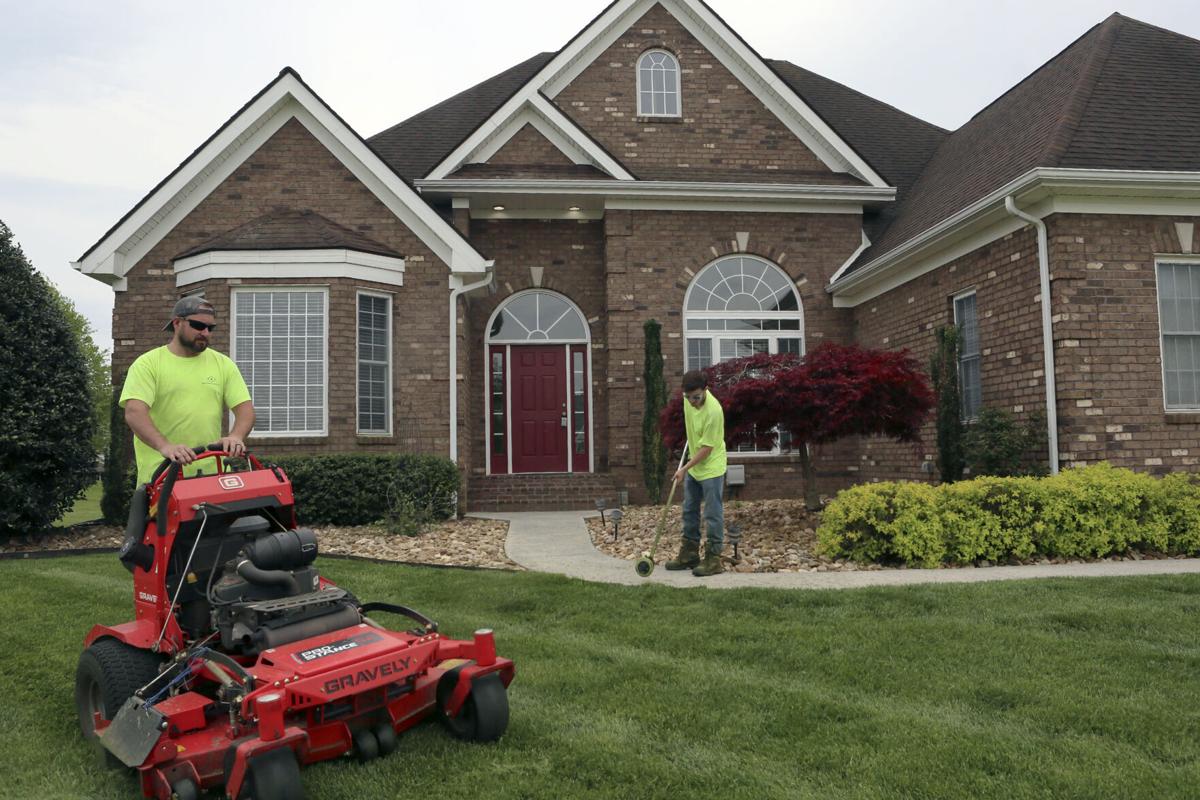 Greg Loar, left, and Cayden Trobaugh of East Coast Lawns LLC complete a mowing job in Fairlawn. The family owned and operated business has signed up to do business through GreenPal, a lawn service comparison and booking app that has begun service in the Roanoke and New River Valleys. 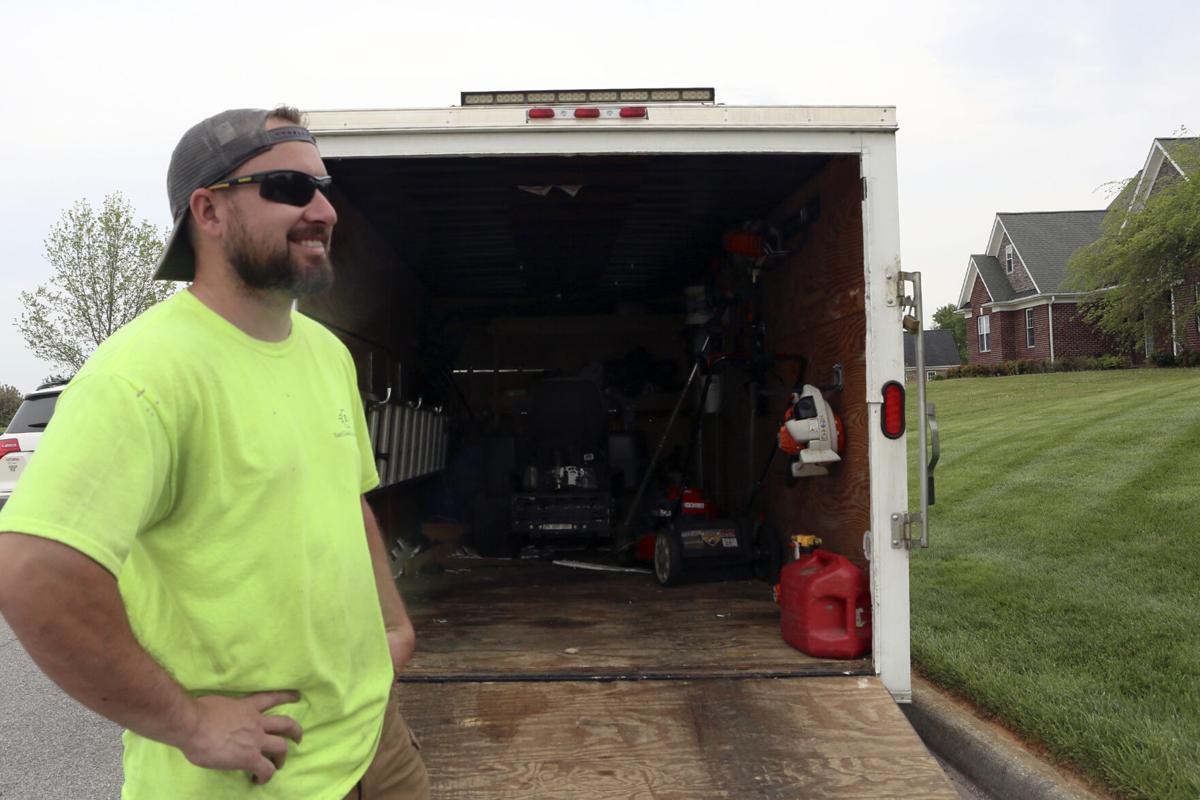 Greg Loar of East Coast Lawns LLC. looks over a completed mowing job in Fairlawn Thursday. Loar has signed up to do business through GreenPal, a lawn service comparison and booking app that has begun service in the Roanoke and New River Valleys.

If you need any more evidence our world is changing at light speed, grab your smartphone. As of Friday, folks in Western Virginia could use it to book a flight, make a loan to a friend, order a delivered dinner, hail a ride or arrange a date.

That’s hardly an all-encompassing portrait of the gig economy, of course. But beginning this morning, there’s something new. Now your phone can mow your grass, or at least something close. Come November, you can use it to rake leaves — or in January, shovel your driveway.

That’s because of a Tennessee-based company known as GreenPal, which connects yard owners with local lawn-care professionals, such as Greg Loar, who owns Christiansburg-based East Coast Lawns LLC.

Beginning today, GreenPal’s offering service in the Roanoke and New River valleys, on top of 250 other U.S. markets in which its already up and running.

GreenPal solicits bids for homeowners from participating (and pre-screened) lawn-care companies. After they choose one, it takes a 5% cut of the fee a homeowner pays. That varies depending on the size of the yard, the height of the grass and other factors. The company guarantees satisfaction — the lawn-cutters don’t get paid until a homeowner approves of their work. And customers can change yard-care providers if they wish.

It doesn’t hurt that GreenPal, started by three best friends from Nashville, has a scrappy, Horatio Alger-type back story. It could tickle the free-market fuzzies of anyone who values hard work, ingenuity and a determination to succeed.

Founders Gene Caballero, Zach Hendrix and Brian Clayton have been chums since middle school. They grew up in the same neighborhood, cut grass for pocket change as teens and attended the same university — Middle Tennessee State — where none of them majored in computer technology.

Caballero’s first degree was in radio and TV production. Hendrix majored in advertising (of which GreenPal does very little) and Clayton’s field was business management.

By 2012, they were in their early 30s. They all had decent jobs, growing retirement accounts and some money in the bank. But they wanted more. The trio decided to go back to their yardwork roots, but on a bigger scale. That’s when they cashed in some 401(k)s and pooled their savings to form GreenPal.

Each chipped in $50,000. They spent almost all that initial stake on hiring software developers to produce an app that would be the core of the business they had conceived. Each kept their paycheck jobs as the hired developers wrote the code, which took 18 months.

“We encountered every major roadblock you could imagine,” Caballero told me Thursday. A big one was, when the app was finally “ready.” That was in early 2014 — and it didn’t work. The thing was worse than useless, he said.

“All of a sudden, you’re a year and a half in, and you have little to show for it,” Caballero added.

At that point, they could have called it quits, chalked it up as an expensive lesson, and continued working for their employers. But that’s not how it went. None of them wished to throw in the towel on the American Dream.

Instead, one of them raised a question. It was, “Which one of us is going to quit his job and learn [software development] and move forward?” Caballero told me.

That was Hendrix, who enrolled in the Nashville Software School with the unspent $20,000 of their initial stake. Six months later, Hendrix started developing another app.

By 2015, GreenPal was rolling again. Initially the company focused on the South, because that’s where the growing season is longest. (Now they’re operating on the West Coast, the East Coast, the Midwest and in New England.)

In 2016, Caballero and Clayton quit their paycheck jobs to focus full time on GreenPal. By 2018, the company posted its first profit. Last year, its lawn care partners performed 600,000 mowing jobs.

Nationally, the average lawn-cutting job costs $35, Caballero said, and that includes things like sidewalk edge-trimming and blowing grass off hard surfaces. Of that, GreenPal’s take is $1.75. Customers can order weeding, mulching and other services at an additional charge.

Friday, I solicited bids through GreenPal for my place in Grandin Court, which has a total lot size of one-fifth of an acre. Saturday, I received two bids, for $72 and $77. Both lawn-care companies that responded noted they were accepting only weekly recurring appointments.

Caballero agreed with me that those prices seem high. But vendors, not GreenPal, set the pricing, he noted.

“I can assure you that when more vendors join the platform, more quotes will be available and the pricing will normalize,” he said.

One of the partners in this region is East Coast Lawns. Loar, its owner, is a former sheriff’s deputy and EMT. He currently has a pair of two-man crews that handle 60 regular lawn customers. Additionally, East Coast Lawns also has 600 customers for whom it provides non-yard maintenance and repairs.

Loar, 32, launched his business in 2017, because he was tired of being a wage slave. That had been the fate of his mom, a longtime registered nurse who had always worked for others. As she got older and her health declined, it forced her to give up her income. That future looked bleak, he said.

“I saw myself as going down the same rabbit hole my mom did,” he said. “I wanted to do something I could call my own.”

Photographer Matt Gentry caught up with Loar on Thursday afternoon at a lawn-mowing gig in Fairlawn. I spoke with Loar Friday morning. He told me he’s been interested in working with GreenPal since East Coast Lawns’ beginning.

GreenPal wasn’t yet operating in this area. Still, “I went ahead and signed up and played the waiting game,” Loar said.

The app will make East Coast Lawns work easier because customers can schedule regular yard maintenance without calling Loar personally and trading a lot voicemail messages him before both parties can finally connect.

They pay over the app, which means the customers don’t have to be home when East Coast Lawns shows up to work. Paying via credit card on the app means customers no longer have to hide a check or cash under their doormats.

“I could see this was going to be a good way for my clients to choose providers,” Loar said. Now with the help of GreenPal, “we’re looking to expand to Salem and Roanoke this year.”

In that respect, the American Dream chased by three lawn-cutting kids from Nashville is helping people all over the country — like Loar — chase their own business dreams.

That takes hustle and grit and it’s rarely easy. But the payoffs can be big. Caballero cited one example as evidence. It goes back to the days of GreenPal’s early struggles.

Back then, few angel investors or venture capitalists were interested in funding their company, he said.

“Now,” Cabellero added, “we’re getting those calls every week.”

Kiersten Atkinson, 19, has undergone multiple surgeries since being rushed to the hospital and is listed in critical condition. The driver of the car, Christopher “Kip” Nininger, also 19, died.

The pandemic, a national organization bankruptcy tied to sexual abuse lawsuits and other factors have local chapters of the well-known American institution looking to a new future.

Donna Nelson told investigators that she did not know that the man she picked up on a trip to Texas was going to rob a Christiansburg storeowner.

GreenPal is a lawn service comparison and booking app that has begun service in the Roanoke and New River Valleys.

Greg Loar, left, and Cayden Trobaugh of East Coast Lawns LLC complete a mowing job in Fairlawn. The family owned and operated business has signed up to do business through GreenPal, a lawn service comparison and booking app that has begun service in the Roanoke and New River Valleys.

Greg Loar of East Coast Lawns LLC. looks over a completed mowing job in Fairlawn Thursday. Loar has signed up to do business through GreenPal, a lawn service comparison and booking app that has begun service in the Roanoke and New River Valleys. 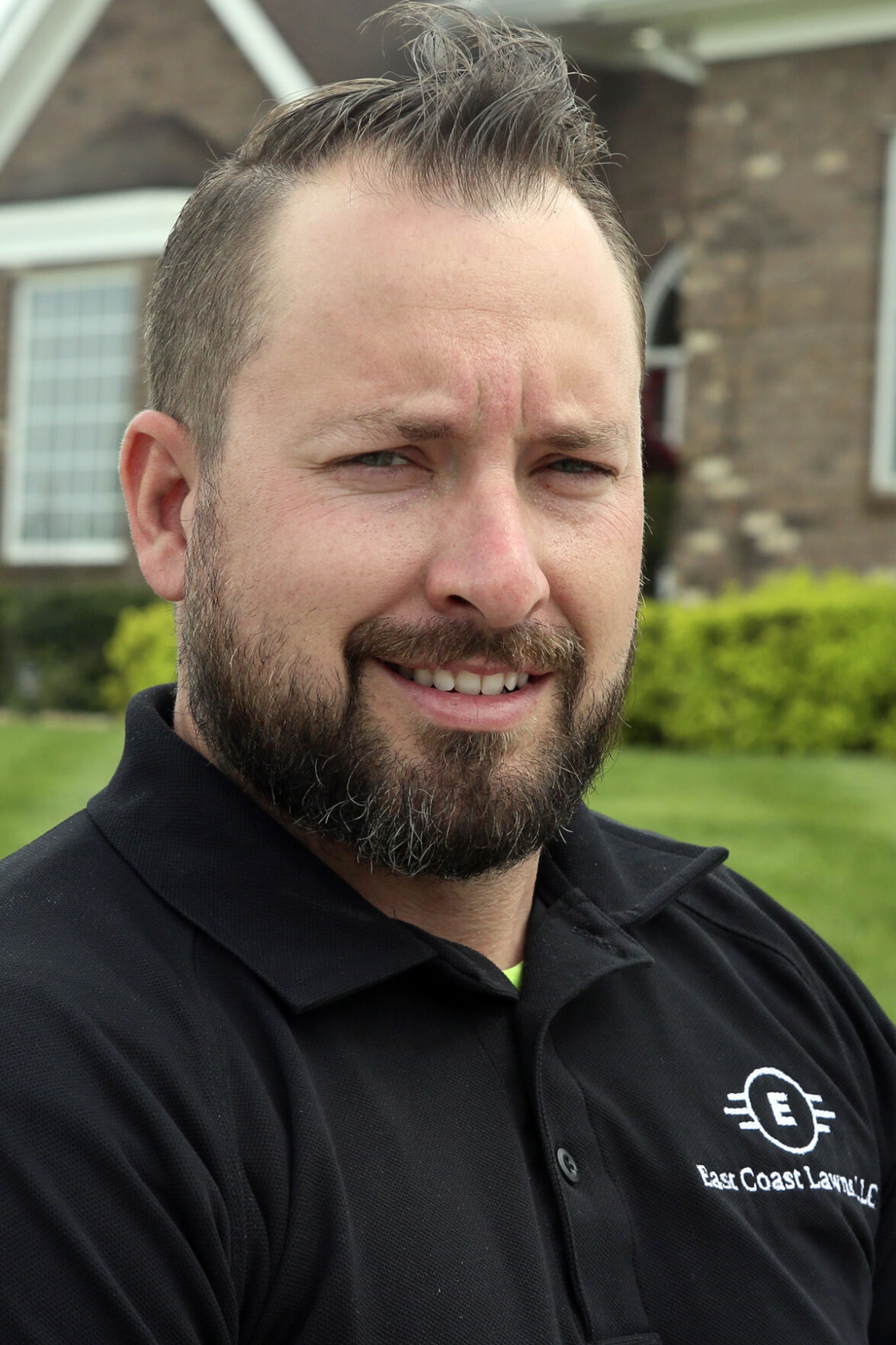