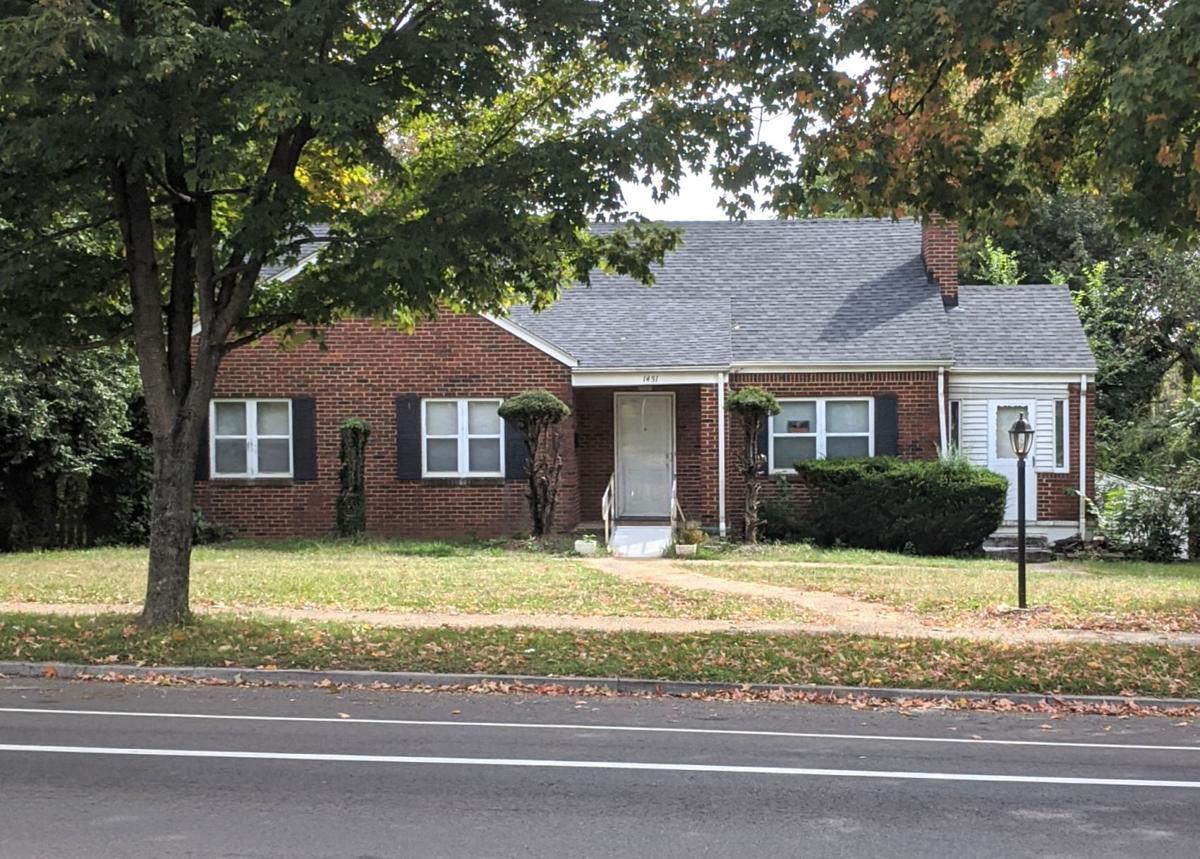 The Lafayette Boulevard home owned by the late Rudolph King Sr., who worked as a Roanoke barber for more than 60 years. Shortly before he died in 2018, it was transferred by King’s caretaker — who had power of attorney — to a friend of hers, spawning nearly two years of litigation. 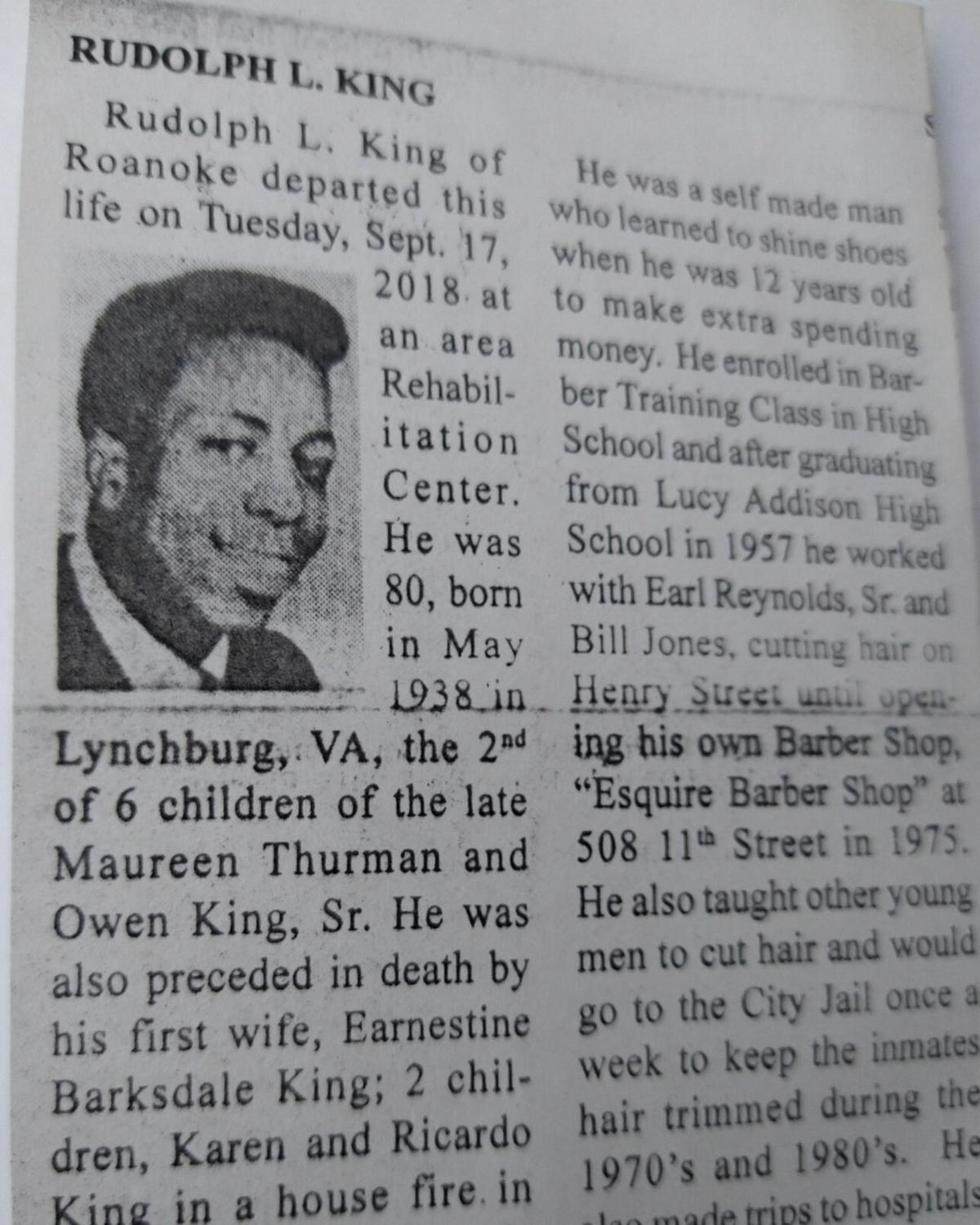 A snapshot of Rudolph King Sr.'s obit in The Roanoke Tribune, published shortly after his death on Sept. 17, 2018. Six weeks after he died, King's family launched a lawsuit over ownership of his paid-for home, which had been unlawfully deeded to a friend of King's caretaker.

By at least one yardstick, you could say Rudolph King Sr. lived the American dream. Raised in Roanoke, he attended the former Lucy Addison High School. There, he studied the barber’s trade. His first job out of Addison was working at a barbershop on Henry Street.

“He was a barber his whole adult life,” said his younger sister, Ann King. “When he was a child, he shined shoes.”

At some point, King developed a hankering to be his own boss. And in the mid-1970s, he struck out on his own. He opened Esquire Barber Shop on 11th Street Northwest. His earnings there allowed him to buy a modest brick house on Lafayette Boulevard.

The Lynchburg native married, then divorced. He fathered at least four children, two of whom perished in a fire many years ago. His hobbies included gardening, cooking, helping friends and family, Ann King said.

“He would do anything for anybody,” said Ann King, who’s now 73. “He was a soft-spoken, proud man. Too proud for his own good.” On some occasions, she said, her brother would take a briefcase full of barber’s tools to the Roanoke City Jail and give trims to inmates.

In 2014, King moved his small business from its rented storefront into his basement, Ann King said. “He said, ‘I should have done this years ago,’ ” she added.

And then on Sept. 17, 2018, King died at age 80 in a rehabilitation center in Salem. He had been ill for almost a year. And although his house was paid for, it didn’t wind up among King’s estate.

That’s because six months earlier, his live-in caretaker, Tracie Hernandez, had improperly deeded the house as a gift to a friend of hers, according to court papers. Hernandez did that using a power of attorney King Sr. had granted Hernandez in December 2017, to manage King’s financial affairs.

According to Roanoke’s real estate records, the home in question is brick, single-level, with 1,700 finished square feet not counting a 1,400-square-foot basement. Built in 1948, it has three bedrooms and two baths.

It stands on slightly less than an acre and has a detached garage. For tax purposes, the land and improvements are assessed at $101,000.

Ann King questioned how the title had ended up in the name of Hernandez’s friend, Lawanda Charles. That didn’t seem right to Ann King or to King’s son, Rudolph King Jr.

By then, Ann King said she’d had already spoken about the matter to Roanoke Commonwealth’s Attorney Don Caldwell. He advised her to call the police, and she did, she said.

The Roanoke Department of Social Services performed an investigation while Rudolph King Sr. was still alive and living in a rehab center. That resulted in a judge on June 4, 2018, voiding the power of attorney to Hernandez, and appointing Ann and Rudolph King Jr. guardians of the elderly barber.

But by that date, King no longer owned his home. In terms of the house, the city investigation “didn’t get us anywhere,” Ann King told me. “We worked with detectives for right many months. They only said, ‘this is a civil matter.’ ”

She and King Jr. also consulted some attorneys. One lawyer asked for a $10,000 retainer and estimated the case could ultimately cost $30,000, she said.

Then she called me at the recommendation of a friend. But the problem was beyond my power to rectify.

“Ms. King, you don’t need a journalist,” I told her. “You need a lawyer.” I said I would try to find one who might help.

I called Matt Broughton, a senior partner at Gentry Locke. I had previously written about other regular folks he helped out of some sticky legal jams. Soon, Ann King was in his office. Broughton included one of his partners, Travis Graham, whose specialty is estate litigation.

On Nov. 1, 2018, Graham filed a lawsuit on behalf of Rudolph King Jr. that sought to invalidate the home’s transfer to Hernandez’s friend, Lawanda Charles. The complaint charged Hernandez’s gift of the home to Charles was “a fraudulent conveyance.”

Hernandez did not return a phone call regarding this story — nor did Rudolph King Jr.

But in court papers Hernandez filed, acting as her own attorney, she claimed she and King had been in a relationship for 25 years, on and off, that they had been lovers, and that she moved into King’s house to take care of him because his other family members would not.

King wanted her to have the house and three cars he owned, Hernandez wrote. Then why did she transfer his home to Charles?

“Because I was advise[d] it would be unethical to [put it] in my name and it would be better to get King to sign it,” Hernandez wrote in court papers. “King was not well enough or in any shape to sign anything so I put it in [Lawanda’s] name because King knew her and love [sic] like family so I knew it would be OK [with] King.”

Hernandez obtained the senior King’s power of attorney on Dec. 7, 2017, shortly after he’d returned home from a five-day hospitalization.

On March 1, 2018, Hernandez transferred ownership of King’s house to Charles with a “deed of gift,” signing both King’s name and her own, as his “attorney in fact.”

That deed gave King the right to live in the house until his death. And after he died, on Sept. 17, 2018, Hernandez continued living there.

The original lawsuit also named Charles as a defendant, but she never responded to any of the court filings, Graham said.

After a one-day trial this past August, Circuit Court Judge William Broadhurst found “the execution of the Deed by Ms. Hernandez was not a valid exercise of any implied authority granted by the power of attorney under which Ms. Hernandez purported to act.”

Broadhurst awarded the house to Rudolph King Jr., who’s in charge of his father’s estate. The judge also awarded King Jr. $2,612 in expenses and ordered Hernandez to vacate the dwelling by Sept. 15. But she did not.

Instead, Roanoke police ordered Hernandez out of the house Oct. 2, pursuant to another order signed by Circuit Court Judge David Carson.

Graham told me this case is one example, among a multitude, of the way the legal instrument known as power of attorney can be misused.

“The person who invented the power of attorney should be taken out and shot,” Graham told me. “They’re often used by dishonest people to steal things. But when you have an honest person using a power of attorney to try to help, he or she is left open to accusations of theft. Either way, you can have a disaster.”

He called the King case, “a depressingly familiar set of facts. We get calls almost daily from people who feel their elderly or disabled relatives or friends have been victimized in one way or another. Almost without exception those cases involve a caretaker who has taken charge of an elderly person’s money, property and health care, and there is always a power of attorney involved.”

Today, a dumpster stands adjacent to Rudolph King Sr.’s former home. More than two years after the proud barber’s death, the place looks like it could use a bit of tender loving care.

Rudolph King Jr. “intends to live there,” Graham told me.

Gov. Ralph Northam on Tuesday said none of the 65 people he and his wife were near before testing positive for the coronavirus became infected. He credits masks for keeping them safe.

Shortly before a Mountain Valley Pipeline opponent was charged in 2018 with trespassing in a construction zone, a member of the project’s security force falsely targeted her as “affiliated with Antifa,” a lawsuit claims.

The Lafayette Boulevard home owned by the late Rudolph King Sr., who worked as a Roanoke barber for more than 60 years. Shortly before he died in 2018, it was transferred by King’s caretaker — who had power of attorney — to a friend of hers, spawning nearly two years of litigation.

A snapshot of Rudolph King Sr.'s obit in The Roanoke Tribune, published shortly after his death on Sept. 17, 2018. Six weeks after he died, King's family launched a lawsuit over ownership of his paid-for home, which had been unlawfully deeded to a friend of King's caretaker. 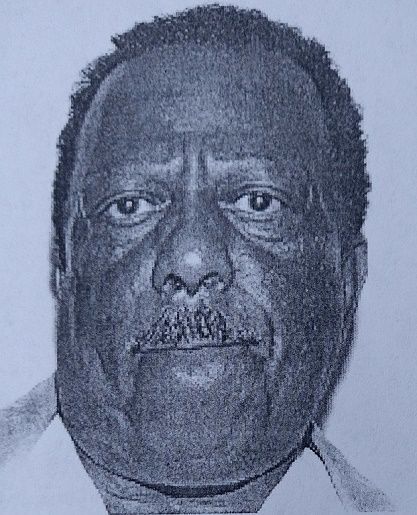