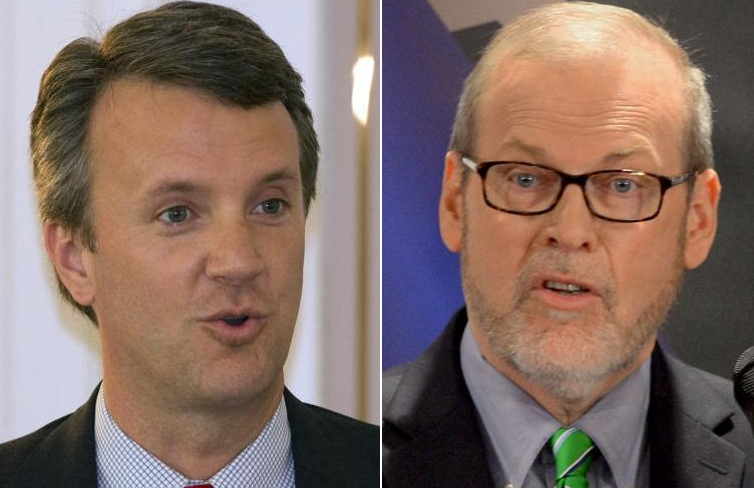 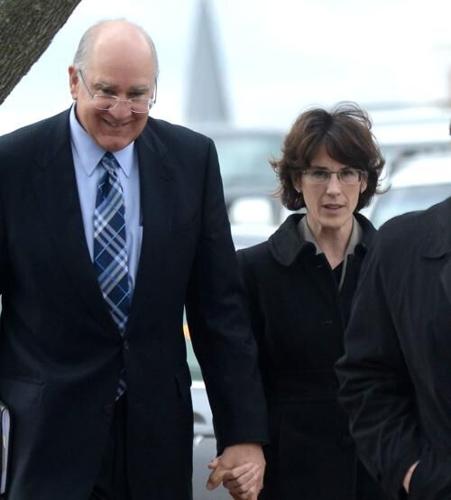 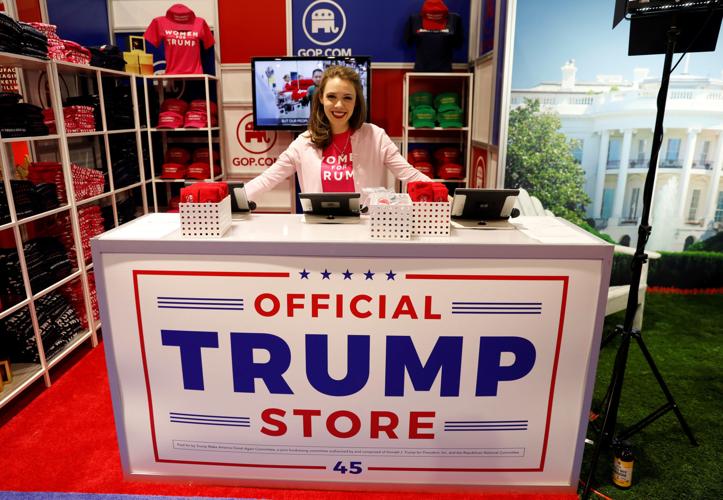 Merritt Corrigan, who graduated from Roanoke’s Patrick Henry High School in 2012, working the Trump booth at the Conservative Political Action Committee conference in Oxon Hill, Maryland in 2018. From 2016 to 2018, Corrigan worked for Republican National Committee in Washington, D.C. More recently, she worked at the Hungarian Embassy in the nation’s capital. This past spring, President Donald Trump appointed her as the U.S. Agency for International Development’s deputy liaison to the White House. 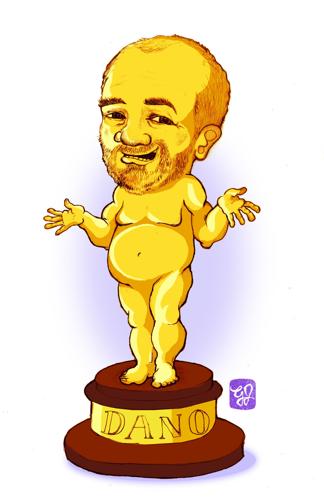 A “Dano Award” in all its glory. Former Roanoke Times graphic artist Grant Jedlinsky drew the Dano statuette, which has been awarded since 2009.

Although we’ve already made it to 2021, we still have a few loose ends to tie up from last year. A big one is the 2020 Dano Awards for Glaring Public Stupidity. It’s named after yours truly because I manage to meet the seminal qualifications on a weekly (if not daily) basis.

But I’m hardly unique in that regard. There’s a lot of stupidity going around, and the Dano Awards honor it. We had umpteen nominees this year. They were almost everywhere you looked. Often you could find them bare-faced in the grocery store.

Here are this year’s winners, in no particular order:

For the first time we are bestowing a Dano Award for Cockeyed Constitutional Scholarship. Our two recipients are attorney-congressmen from western Virginia, Reps. Ben Cline, R-Botetourt, and Morgan Griffith, R-Salem.

This dangerous duo was among more than 125 House Republicans who filed a friend-of-the-court brief in support of the state of Texas’ attempts to overturn the 2020 presidential election. President Donald Trump himself called the doomed U.S. Supreme Court case “the big one.” It wasn’t — it failed like all the others.

In it, Texas Attorney General Ken Paxton made the fatuous claim that Georgia, Pennsylvania, Michigan and Wisconsin (all won by Joe Biden) had each improperly administered their elections, and that Texas had been harmed as a result.

Many people recognized the case as akin to suing your neighbor because you don’t like the way she bakes macaroni and cheese. And it seemed obvious that Paxton, currently the subject of a federal corruption investigation, filed the case to curry favor — and perhaps angle for a pardon — from Trump.

Nevertheless, our congressmen jumped to support overturning the election like lemmings running over an undemocratic cliff. Yikes, their guy lost by more than 7 million votes. Perhaps Morgan and Ben are a couple of amendments short a of a constitution. Can’t we do better?

This is the first year we have married couples jointly earning awards for their foibles and faux pas. And the first up are former Liberty University President Jerry Falwell Jr. and his adventurous wife, Becki.

The ex-university president and first lady forfeited their plum positions after Becki acknowledged having a long-running affair with a 20-something pool boy she and Jerry met in Miami. They also kindly set up the young man in business, at a gay-friendly hostel in South Beach.

The pool boy claimed Jerry liked to watch, but he vehemently denied that and claimed the paramour was trying to blackmail them. The important thing, though is that Jerry forgave Becki — and for that he gets the Dano Award for Husband of the Year. Becki, meanwhile earned her own honor, the Dano Award for Selfless Mentorship in Business and Other Activities.

Congrats to the Falwells!

Our next couple is not as well known, unless you live in Bristol. Kurt and Stacey Pomrenke used to be leading citizens of the fair city on the Tennessee border. He was a Virginia Juvenile and Domestic Relations Court judge. She used to be chief financial officer of Bristol Virginia Utilities.

After a jury trial in 2016, Stacey was convicted of 14 counts of fraud, bribery and extortion in a wide-ranging scandal at the public service corporation. It involved her colleagues, BVU board members and contractors. She got 34 months in prison.

Kurt, meanwhile, was booted off the bench for contacting witnesses — pre-trial — who testified against Stacey. That’s a big judicial no-no. But it wasn’t the Pomrenkes’ talented maneuvers in 2016 that’s earning them plaudits now.

Earlier this year, the they each pleaded guilty to federal fraud charges in a scheme to persuade the U.S. Bureau of Prisons that Stacey needed treatment for alcoholism in the pokey. The program she completed allowed her to leave prison seven months early.

But Stacey wasn’t a drunk, according to acting U.S. Attorney Daniel Bubar. She just pretended to be. She lied to her physician about alcohol consumption, and schemed to fake withdrawal symptoms after she entered prison. According a news release from Bubar, the Pomrenkes also paid a “consultant” $7,500 to advise them how to pull off the scheme. And that was their downfall.

The “consultant” dropped a dime on the couple after he got caught in an unrelated crime. Oops! For that, the Pomrenkes earn the Dano Award for Most Sober and Unlucky Married Couple. (They both face prison soon.)

Jerry and Becki must be breathing huge sighs of relief, eh?

We don’t often hand out awards to members of the media, but 2020 was an exceptional year, right? So we have an exception! His name is Leo Hohmann, and he’s a freelance writer for some dubious “news” websites. He spent most of his earlier career at small newspapers in Georgia.

Late in August, Leo published an alarming yarn about violence that purportedly occurred in downtown Roanoke’s Market Square on Aug. 28. According to his account, some racial-justice protestors attacked an outdoor diner outside 202 Social House. Leo even dressed up article up with photos he filched from this newspaper, of a Black Lives Matter protest in the Star City months earlier.

Titled “Chaos is Coming to Mayberry,” the tale was a big hit. Mark Levin, a nationally syndicated talk radio host, promoted it on his show, and appeared to buy it hook, line and sinker.

The only problems were the “facts.” According to a manager at 202 Social House, the restaurant offered no outdoor dining that night — and its security video showed no images of a protest or melee. The story’s sole source/protagonist (who fought back like a comic-book superhero) had a fake name, which Leo acknowledged.

And Roanoke police had no record of an attack or calls for service about it. Nor could the cops find broken bodies of the attackers that the fake-named protagonist had supposedly left bloody in the street. It was easy to check out Leo’s key claims — and literally none of them checked out.

For all of the above, he earns the Dano Award for the Most Inept Attempt at Fake News about the Star City.

Our final honoree is a local — she graduated of Patrick Henry High School in 2012. She left an indelible impression on many I spoke to when I wrote about her last summer.

Merritt Corrigan, who was then 26, worked her way up from counter girl for the Trump Store at a Conservative Political Action Conference all the way to deputy White House liaison to the U.S. Agency for International Development.

Along the way she made some pit stops at the Republican National Committee and the Hungarian Embassy in Washington, D.C. It was truly meteoric.

And then last June, some reporters uncovered scores of chauvinistic, nationalistic and anti-gay tweets she’d sent on Twitter. They assailed “liberal democracy,” and vilified birth control, premarital sex, feminism and marriage equality. They also raised many eyebrows, because those notions conflicted with USAID’s published values.

A couple of them indicated Corrigan favored a society organized as what she termed “Christian patriarchy.” Another tweet read: “ “Feminism sold the ridiculous lie that being ‘just someone’s wife’ wasn’t as valuable as having a career. But what’s actually more valuable — being someone’s wife or someone’s HR assistant?”

For that, she gets the Dano Award for Quickest Rise and Fastest Fall of a Patrick Henry High School Alum.

Happy New Year and congrats to all the winners of these enviable awards. We’ll be handing out more at the end of 2021 — which will be here sooner than you might think.

A man who was found severely burned at the duck pond in Salem is being treated for his injuries, according to city officials.

CASEY: Is 8 years in prison enough for this Jan. 6 insurrectionist?

Former police officer Thomas Robertson knew the law, and violated it repeatedly, both at the Jan. 6 insurrection and following his arrest on federal charges. That's why prosecutors are asking for a stiff term of incarceration.

Man acquitted in deaths of 7 motorcyclists

Man acquitted in deaths of 7 motorcyclists

Merritt Corrigan, who graduated from Roanoke’s Patrick Henry High School in 2012, working the Trump booth at the Conservative Political Action Committee conference in Oxon Hill, Maryland in 2018. From 2016 to 2018, Corrigan worked for Republican National Committee in Washington, D.C. More recently, she worked at the Hungarian Embassy in the nation’s capital. This past spring, President Donald Trump appointed her as the U.S. Agency for International Development’s deputy liaison to the White House.

A “Dano Award” in all its glory. Former Roanoke Times graphic artist Grant Jedlinsky drew the Dano statuette, which has been awarded since 2009.