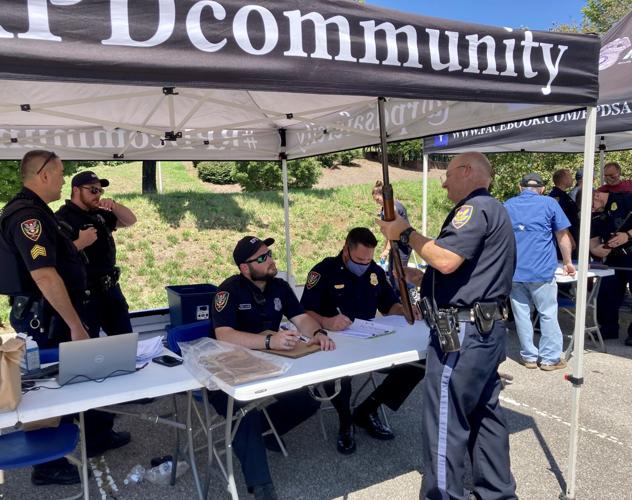 The Roanoke Police Department was a co-sponsor of the first Groceries Not Guns buyback last August. In all, it took in 91 unwanted firearms that were later destroyed, and buyback organizers distributed $14,000 in grocery gift cards. This year, organizers have raised more than $30,000 worth of gift cards to exchange for guns. 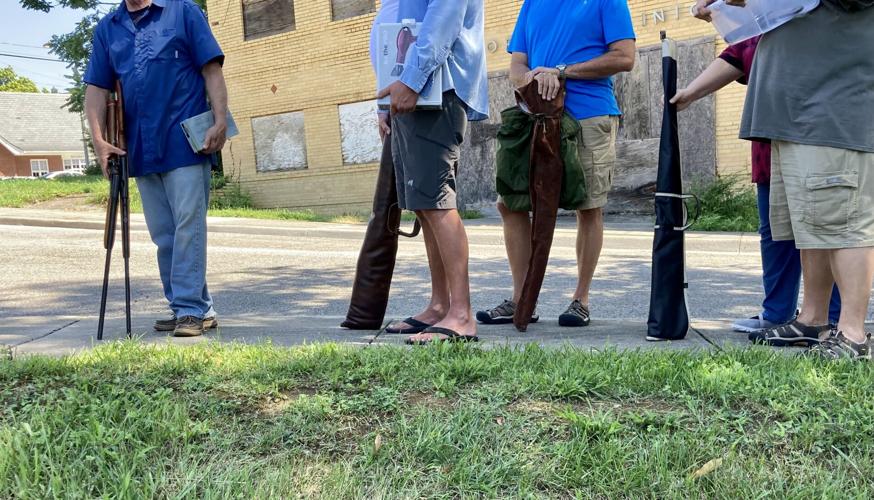 The line for Roanoke’s first gun buyback event “Groceries Not Guns,” started forming early last Aug. 21 and after an hour organizers had given out their entire stock of $14,000 in grocery gift card incentives. Another buyback happens Saturday, and this time organizers have more than $30,000 in gift cards to exchange for guns.

An interesting thing happened in the Historic Gainsboro neighborhood one Saturday morning in August.

Some anti-violence activists raised money, used it to buy Kroger and Food Lion gift cards, then offered to trade those to the public for guns, few questions asked.

At Roanoke’s first-ever gun-buyback event, a working semi-automatic handgun was worth a $250 grocery card. Any other working firearm was worth a $150 card. Inoperable guns brought a $50 card.

The result vastly exceeded the expectations of the organizers, the Roanoke Branch of the NAACP, the Virginia Harm Reduction Coalition and Roanoke police.

By the time last year’s buyback began, on Aug. 21, the line of people with guns to trade “stretched twice around the building,” said Brenda Hale, president of the Roanoke branch.

In all, people exchanged 72 firearms for $14,000 worth of grocery gift cards, some of which were donated by the two supermarket chains. Another sponsor, Carilion Clinic, donated trigger locks.

Groceries Not Guns 2021 was out of gift cards in about an hour, and people surrendered another 19 firearms without getting any compensation. All the guns were melted down, said Catherine Koebel Stromberg, one of the organizers.

A leading Virginia gun-rights activist, Philip Van Cleave, criticized the 2021 buyback as “political theater” and compared it to “a car buyback to get drunken drivers off the road.” (He heads the Virginia Citizens Defense League.)

But we now know last year’s buyback was no flash in the pan.

Groceries Not Guns 2022 returns at 11 a.m. Saturday, at the Melrose Community Center, 1427 Melrose Ave Northwest. This time, the organizers have armed themselves with more than double the value of the gift cards compared to last year.

Currently their grocery-card kitty stands at more than $30,000. And they’re still raising money to buy more guns off the street, through the Roanoke Quaker Meeting. The long-established religious congregation has joined Groceries Not Guns as a sponsor/organizer this year.

Last month, working with the buyback organizers, the Quakers received a two-year, $40,000 grant from Roanoke’s Gun Violence Prevention Commission. It plans to use $20,000 for Saturday’s buyback and the other $20,000 next year.

Kroger, Food Lion and Carilion Clinic have each contributed $2,500 to Saturday’s effort. And aside from those donations and the commission grant, contributions from the community are still coming in, said Mike Heller, clerk (or chief administrator) of the Roanoke Quaker Meeting. He’s a West Point graduate who taught English at Roanoke College for 31 years.

Anyone who wants to contribute to Groceries Not Guns can mail a tax-deductible contribution to the Roanoke Quaker Meeting, P.O. Box 4584, Roanoke, VA 24015. Stromberg said donors should list “Groceries Not Guns” on the check’s memo line.

The Quakers got involved partly because Groceries Not Guns needed a 501c3 nonprofit to apply for and receive the commission grant. (The NAACP is a 501c4 nonprofit.) Hale knew Heller because he serves on the Roanoke NAACP branch’s executive board.

Reducing violence is central to Quaker values, and it has been since the religious movement launched more than four centuries ago, Heller told me.

“With Groceries Not Guns we are helping to reduce the number of guns available to children and young people,” Heller said. “ Every home we reach will make a difference.”

It’s fair to say that last year’s gun buyback has not reduced firearm violence in the city. Rather, that seems to be heading in the other direction.

Between Jan. 1 and June 3, Roanoke had eight homicides, all but one by firearm, and 27 people shot, according to a tally kept by The Roanoke Times. During the same period in 2021, the numbers were six homicides, two by gun and 23 woundings.

Stromberg said the buyback works more like vaccinations. On a societal scale, COVID-19 is still spreading despite available vaccines. However, on an individual level, the vaccines are preventative.

“Gun violence has become a health crisis,” Hale said. “Buybacks prevent deaths. If guns are not in the homes, people will use other kinds of resolutions to disputes, and means other than guns to expend their anger. That decreases the chance of deaths.”

The organizers are targeting low-income areas of the city because that’s where most of the gun violence occurs. Those same neighborhoods also have the greatest challenges with food security. And those pressures are only growing greater with inflation, as food prices rise quickly.

Half of the people who turned in guns last year self-reported annual incomes under $30,000,” Stromberg said.

“We got a gun from one person who said their motivation was sheer hunger,” she added. “They needed the money more than the gun.”

Organizers are betting even more Roanokers will find themselves in that position this time around.

• What: Roanoke's second gun buyback will distribute more than $30,000 worth of grocery gift cards to people who turn in unwanted guns.

• Details: Kroger and Food Lion gift cards will be given to people who turn in firearms for destruction. Semi-automatic handguns are worth a $250 card. Rifles, revolvers and shotguns are worth a $150 card. All guns must be in a closed box or suitable container. Limit 2 guns per household. Virginia residents 18 and older are eligible. Identification required.

• How to contribute: Mail a check to Roanoke Quaker Meeting, PO Box 4584, Roanoke, VA 24015. Donors should list “Groceries Not Guns” on the check’s memo line.

A starting player for the women's soccer team claims she was benched for refusing to kneel during a pregame unity ceremony.

More than half of the school's faculty responded to a survey in March and April.

Richard Macher is now involved with the futures of two large downtown buildings.

CASEY: R.I.P to ‘the only man in Virginia who’s seen Elizabeth Taylor in a slip’

Ronkeith Adkins, 84, lived a life full of adventures, from rubbing shoulders with mobsters in Detroit as a boy to skydiving with D-Day veterans as a young adult. And at one time or another, he helped elect just about every Republican officer-holder in the Roanoke Valley.

Del. Marie March, R-Floyd, had alleged she was being harmed by actions related to a zoning disagreement.

Markus Maly, who was charged with pepper-spraying police officers, was taken in custody following the verdict

Haley Toyota built Roanoke’s largest sign in 2015, about a month after the dealership moved to its present location near the Berglund Center. Now the car dealer’s alight in red, green and white to create what’s probably the biggest single holiday decoration in the Roanoke Valley.

Did you know your face is covered in tiny mites?

Apollo lifted out of Versailles' gardens for restoration

Apollo lifted out of Versailles' gardens for restoration

Tom Brady and Stephen Curry under investigation after FTX collapse

Tom Brady and Stephen Curry under investigation after FTX collapse

The Roanoke Police Department was a co-sponsor of the first Groceries Not Guns buyback last August. In all, it took in 91 unwanted firearms that were later destroyed, and buyback organizers distributed $14,000 in grocery gift cards. This year, organizers have raised more than $30,000 worth of gift cards to exchange for guns.

The line for Roanoke’s first gun buyback event “Groceries Not Guns,” started forming early last Aug. 21 and after an hour organizers had given out their entire stock of $14,000 in grocery gift card incentives. Another buyback happens Saturday, and this time organizers have more than $30,000 in gift cards to exchange for guns.