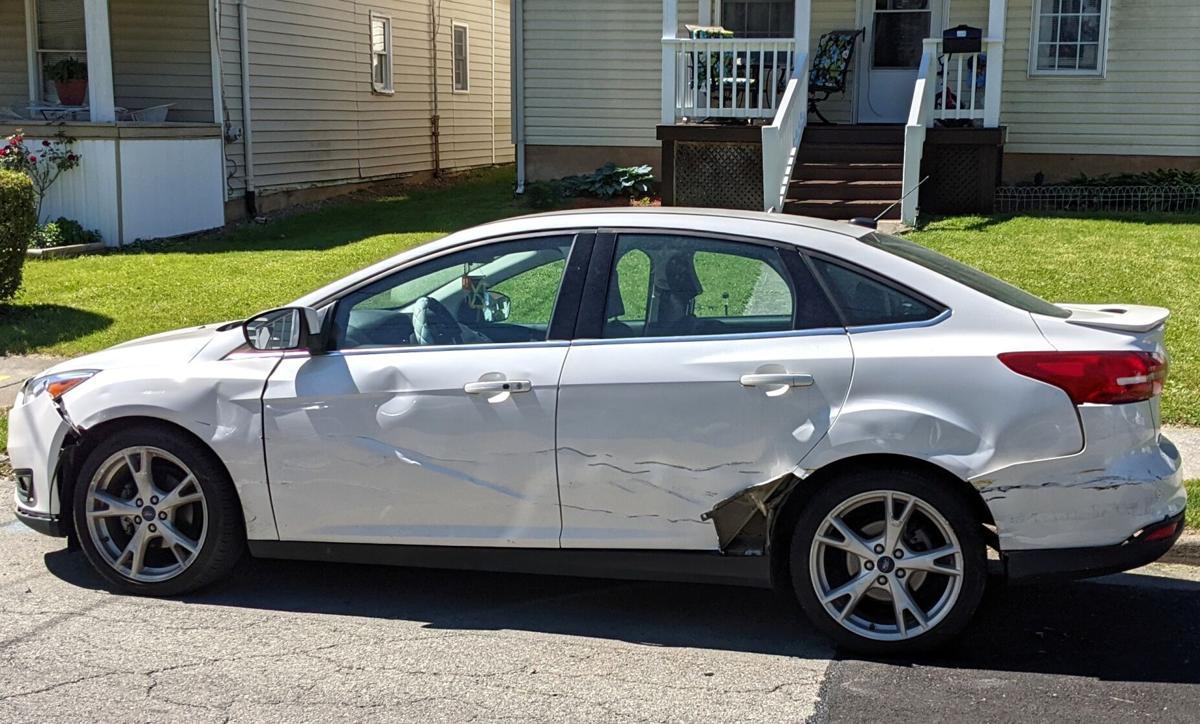 Linda Jones 2016 Ford Focus, which was damaged by a Roanoke garbage truck Monday morning as it was parked outside her home in northwest Roanoke. 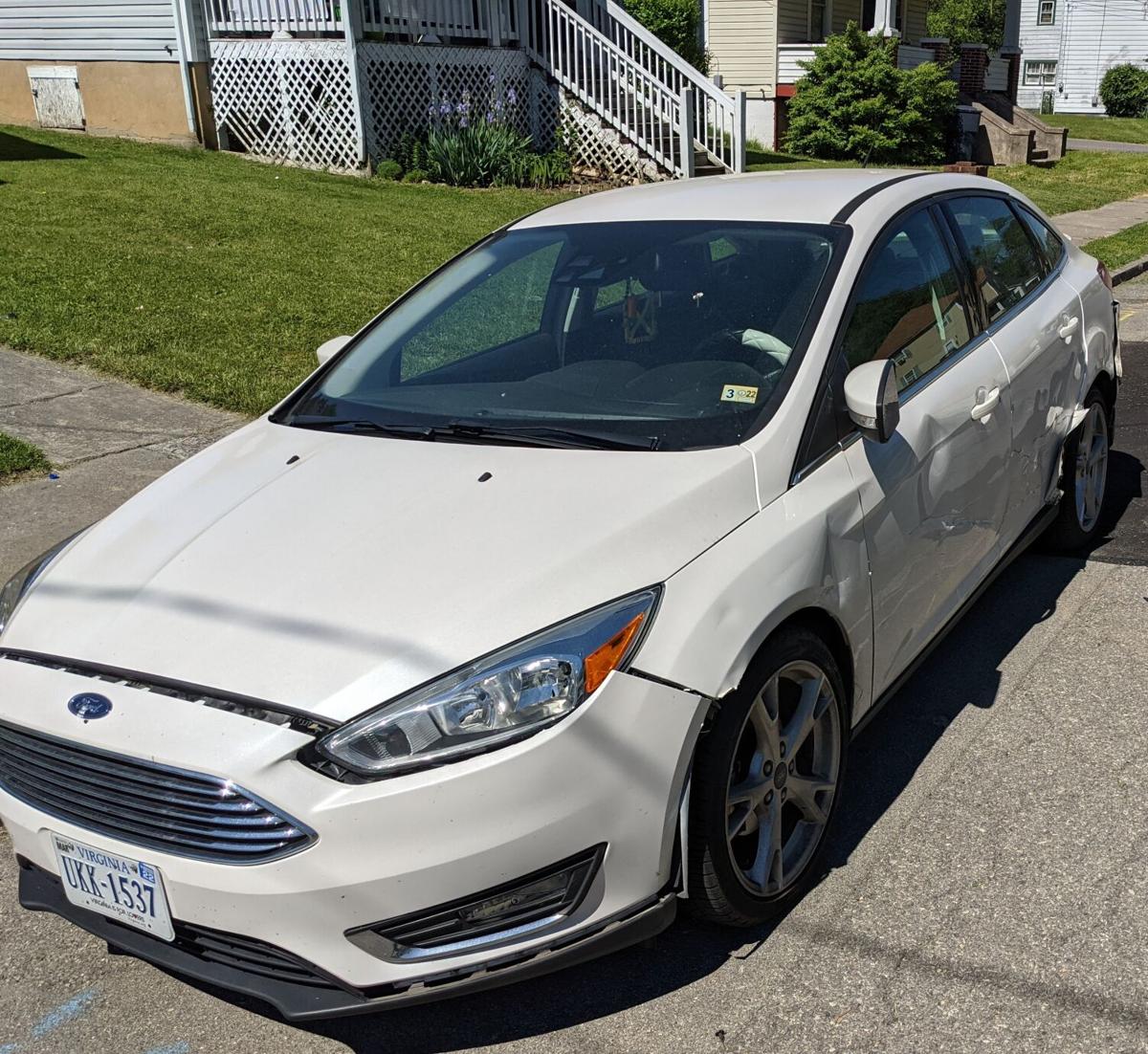 Among other damages, the Monday-morning accident separated the top of Jones’s front bumper from the remainder of her 2016 Ford Focus. 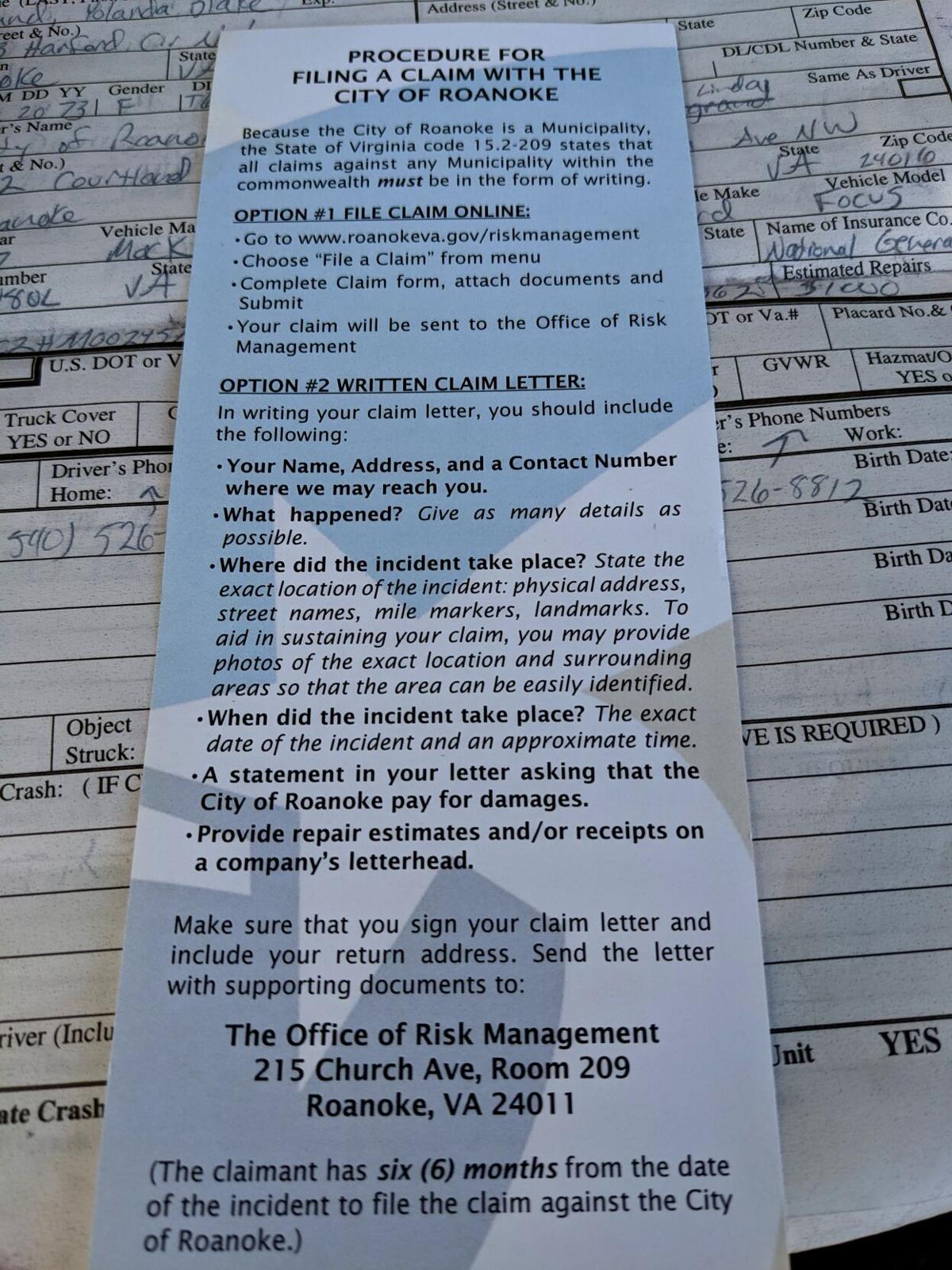 A printed card on how to make a claim against the city of Roanoke, which was given to Linda Jones by a supervisor in the Roanoke's Solid Waste Management Department.

When the hydraulic grabber arm on a city garbage truck fails to return to its normal resting position after setting down an empty trash barrel, it protrudes from the truck’s passenger side.

And when a trash truck in that state navigates a street with cars parked on both sides, guess what can happen? There’s a good chance it’ll dent, graze and gouge a parked car. And golly, those grabber arms can cause some damage.

Linda Jones of Roanoke learned that lesson — and few others — last week when a city garbage truck did that to her 2016 white Ford Focus.

When it happened — about 10 a.m. Monday — Jones was watching TV and had little inkling of the mini-drama unfolding outside.

“I heard a loud noise — I just thought they were getting the trash cans,” said Jones, who lives in the 500 block of Madison Avenue Northwest. “I didn’t pay it no mind.”

Minutes later came a knock on Jones’s front door. She opened it and found a Roanoke police officer and another man. He identified himself as a supervisor in the city’s Solid Waste Management Department.

A trash truck had hit Jones’s parked 2016 Ford Focus, the supervisor told her. The truck’s driver stood on Jones’s front lawn, she said.

“The driver informed me ‘don’t worry, the city will take care of it,’” Jones recalled. The driver added, “‘they need to get you a rental car.’”

Initially, Jones wondered why. From her front porch, little appeared amiss with the white, four-door sedan. But she was looking at the car’s unblemished passenger’s side.

When Jones walked into the street for a glimpse of the driver’s side, “I was like, ‘Oh my God, they have torn my car up!’” Jones said. That’s hardly an exaggeration.

Beginning from the car’s rear bumper, the garbage truck gouged creases and scrapes along the driver’s side all the way to the front, where it nearly ripped off Jones’s molded-plastic bumper. The damage left a hole in Jones’s rear driver’s side door, and damaged the back bumper, too.

The front bumper appeared separated all the way across the car’s hood. The front and rear quarter panels on the driver’s side were mangled, too. Jones told me she’s afraid to drive it to a body shop, because she fears the front bumper will fall off if the car moves.

The police officer filled out an “accident exchange of information” form. He estimated damages at $1,000. That seems low, because it appears Jones’s car needs two new quarter panels, new front and rear bumpers, at least one new door and possibly two.

The entire car may also need a paint job. At the very least, the whole driver’s side will. And quality auto body work isn’t cheap.

The officer asked Jones if she has insurance, which she does.

“I said to the supervisor, ‘What do I do now?’” Jones told me. He gave her a printed card, titled “procedure for filing a claim with the city of Roanoke.” It offered instructions.

Jones filed her claim with the city online that same day. Late that afternoon, Jackie Clewis, the city’s risk manager, acknowledged it with this email: “We have forwarded your claim to our claims adjuster. We do not fix your vehicle, you will have to contact your insurance company for that. Thanks.”

An attached letter identified the adjuster as the Virginia Association of Counties Risk Pool, also known as VACORP. It said VACORP would investigate and “render a decision as to liability.” The letter added: “Once a decision has been made regarding your claim, the claims adjuster will contact you with respect to the City’s position in this matter.”

Jones subsequently informed her insurance company. Its representative told Jones she needed to send the insurer an actual police report, rather than a mere “accident exchange of information” form.

As of Friday, Jones said the police told her the report is not ready. Meanwhile, the car’s parked in front of her house. Since the accident, she said she’s been paying for rides for herself and her 4-year-old son.

Unfortunately I couldn’t offer much good news to Jones. At least twice previously, I’ve covered near-identical accidents caused by city vehicles. In both cases VACORP denied the claims under a legal doctrine known as “sovereign immunity.” That makes it difficult to sue a government and win anything, even when the government is at fault.

In one of those cases, from 2016, a Roanoke trash truck backed into a legally parked Subaru Forester outside an apartment in the Old Southwest neighborhood. More than a month after that accident, owner Ian Williams received a letter from VACORP denying his claim.

“After a review of the facts of the accident, we have determined that the Solid Waste employee was performing his governmental function at the time of the accident,” the VACORP letter to Williams said. “Since the employee’s actions arose out of his governmental function, we must respectfully deny any liability for any claim arising from this incident. No payment will be issued to repair your damaged vehicle.”

Roanoke City Attorney Tim Spencer said it would be improper for him to comment, because he’s unfamiliar with the circumstances of the damage to Jones’s car.

“There are times when claims are approved, and we’re recommended to pay a claim,” Spencer said.

I also called Clewis, the risk manager, and wound up speaking with Finance Director Amelia Merchant. She was unfamiliar with Jones’s case. Merchant told me that as of June 2020, the city had a little more than $12 million in its risk management fund.

Virginia law also says that when a driver who causes an accident is uninsured or immune, a car owner can collect from their own insurer through uninsured motorist coverage. But if the insurer balks at coverage, that puts a car owner in the odd position of having to sue his own insurance company to collect. And in such as case, Jones’s insurer would represent the trash truck driver rather than Jones.

It may also cost Jones $500, which is her amount of her insurance policy’s deductible, plus whatever she pays to rent a car until her Ford Focus is fixed. The rental cost is unclear. That’ll depend on how long it takes a body shop to fix her car.

I mentioned this case to a friend of mine, attorney Jeff Krasnow. He told me he’s willing to help Jones and he encouraged me to pass along his contact info to her. She called him Friday.

Until last week, Jones was totally unfamiliar with the a process akin to suing yourself to get compensated for damages to a car caused by a Virginia local government that’s immune.

Linda Jones 2016 Ford Focus, which was damaged by a Roanoke garbage truck Monday morning as it was parked outside her home in northwest Roanoke.

Among other damages, the Monday-morning accident separated the top of Jones’s front bumper from the remainder of her 2016 Ford Focus.

A printed card on how to make a claim against the city of Roanoke, which was given to Linda Jones by a supervisor in the Roanoke's Solid Waste Management Department.