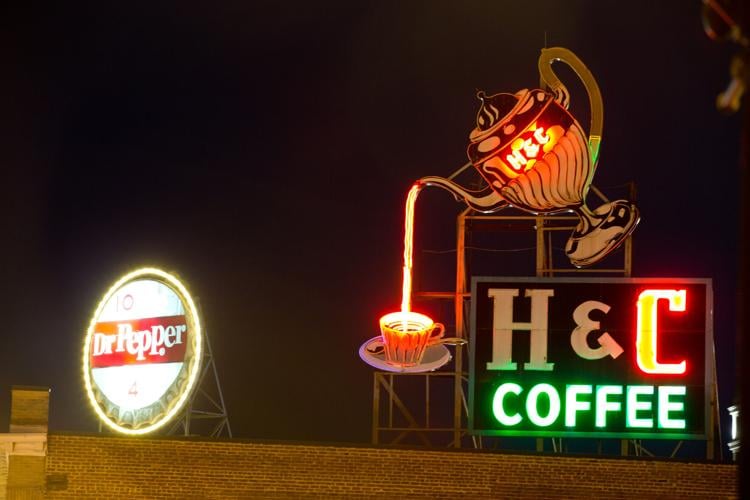 The H&C Coffee and the Dr Pepper signs at Williamson Road. 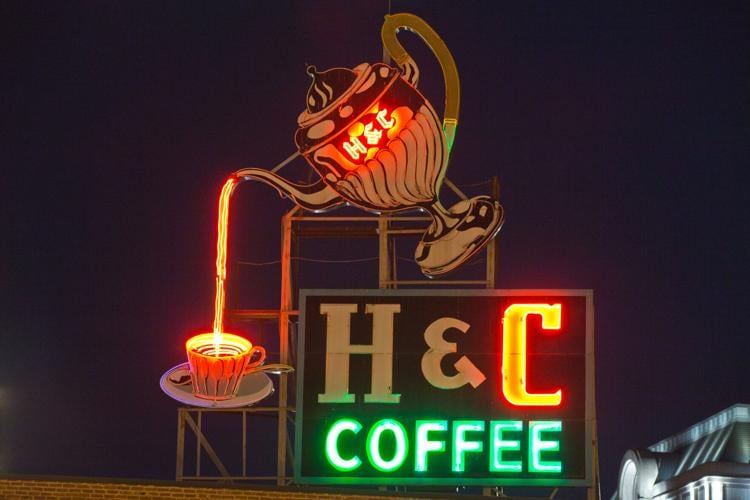 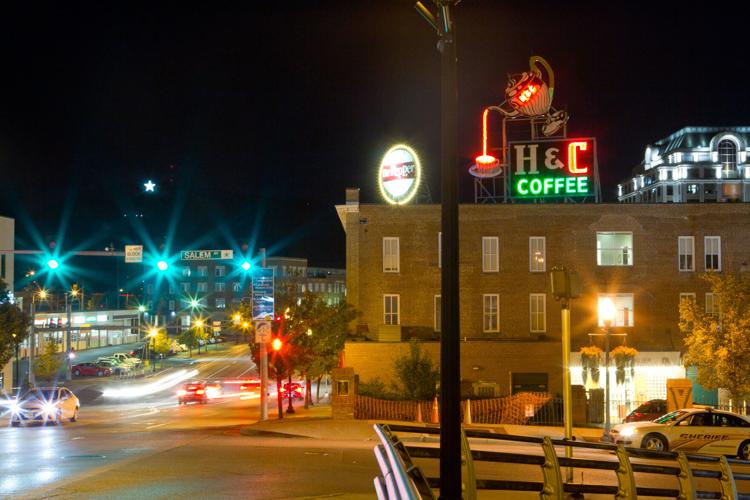 The H&C Coffee and the Dr Pepper signs, with the Mill Mountain Star shining in the left background. 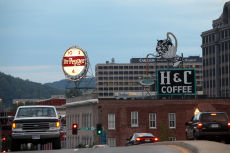 The Dr Pepper sign sits atop the Legg Mason Building at the corner of Campbell Avenue and Williamson Road in a 2010 file photo. 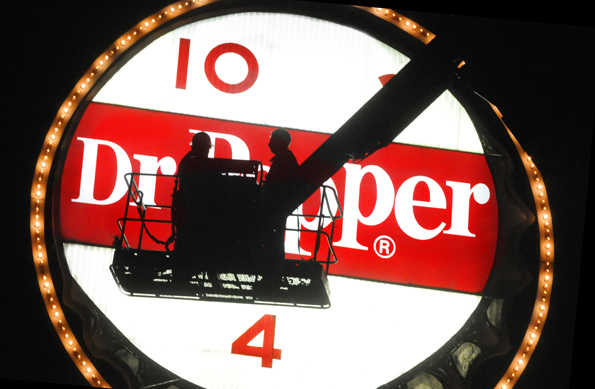 Budget Sign workers elevated with a lift are silhouetted in the foreground of the Dr Pepper sign in downtown Roanoke during 2013 repairs.

A file photo by Don Petersen of of the H & C sign in its neon coffee pouring glory days.

One of the ways Roanokers know they’re home after a spell out of town is the sight of three beloved neon beacons gleaming on the downtown’s skyline, and viewable from southbound Interstate 81 when approaching downtown.

The biggest, of course, is the Mill Mountain Star, which is working just fine. The problem is the other two, which aren’t.

One is the the formerly animated H & C Coffee sign. It no longer moves, while the H, ampersand and parts of the saucer remain dim. The 2 appears missing from the famous Dr Pepper bottle-cap clock sign, featuring a 10, 2 and 4. And the sign’s 3 o’clock position is dimmer than the rest.

Those neon odes to American mercantilism date back at least 60 years, perhaps longer, and each needs some tender loving care that they haven’t been getting. But it’s in the works, people in the know assure me.

This was brought to our attention by Bonnie Darlene Clark, a reader who turns 82 this week. Clark called into our reader hotline recently.

“I’m a citizen of Roanoke. I’ve lived here all my life,” she began.

“And we’re supposed to be the Dr Pepper capital of the world and yet these are just terrible looking. it would be smart for ya’ll to print something about.”

“I just think it looks bad,” Clark said. “If we want tourists, we should fix those signs.” Otherwise it could leave an impression of downtown neglect.

She was unaware who owns the signs and so was I. So I started making some phone calls.

The first was to a different Clark — Jaime Clark, a vice president at Downtown Roanoke Inc. She said her organization’s been hearing complaints, too.

“Neither one apparently lights all the way up,” Jaime Clark said. “I know people feel very strongly about those signs,” she added. DRI has been getting a couple calls a month about them since they’ve been out.

Some years ago, during an earlier period when when the H & C sign was taking a neon coffee break, DRI’s related Foundation for Downtown Roanoke Inc. raised money to fix and restore it, as well as an additional sum for upkeep.

After it was rehabbed, ownership of the sign and the excess maintenance funds were turned over to Center in The Square, Jaime Clark said.

“The Dr Pepper sign is owned by Pepsi,” she added. (She meant Pepsi Cola Bottling Co. of Roanoke, which distributes both Pepsi and Dr Pepper in the Roanoke Valley.)

Next I called Pepsi’s bottling operation in Hollins and spoke to plant manager Mark Sakash.

It’s probably a stretch to say the Pepsi bottler owns the sign. Sakash told me Pepsi distributes Dr Pepper here in the Roanoke Valley. He said an associate named Troy who works for Keurig Dr Pepper (or KPD) “has been trying to find somebody to fix those lights for three years.”

Unfortunately, Troy was on vacation when Sakash and I talked Friday morning.

Sakash called me back Friday afternoon and said the lights on the Dr Pepper sign have been fixed but not all the necessary work has been completed.

“What they’re working on now is a facelift. They’re trying to find a company in Bristol or Richmond, not only to do the Dr Pepper sign but also the H & C sign,” Sakash said. He knew no other details, such as when both signs might be shining once again.

Hunting through some news clips, it appears the signs going dim or partially dim have been a regular topic of news articles, as well as in the local history column “Looking Back.” (Sadly, the newspaper pulled the plug on that weekly feature in April 2021.)

For example, on Nov. 13, 2014, my colleague, Mike Allen, wrote a short story noting the H & C Coffee sign had been lighted but static for a number of days, rather than moving and pouring java into a cup like it’s supposed to.

At the time, the gizmo that animated the sign had broken. Allen’s story also ran down a bit of the H & C sign’s history:

“Built in 1948, the sign began its neon life atop the old Woods Brothers Coffee Co. building on Campbell Avenue Southeast. In 1964 it moved to the old Billy’s Ritz building on the Roanoke City Market, where it stood for decades.

“After a fundraising campaign in 2004 and 2005 that raised more than $150,000 for repairs and maintenance, the sign migrated to the Mill Mountain Theatre Atelier, the former Shenandoah Hotel building owned by Center in the Square. The sign was moved so that it could still be seen from Interstate 581 once the Taubman Museum of Art was constructed.”

The Dr Pepper sign was last rehabbed in 2013. We know this from a February 2013 photo, by Don Petersen, of workers using a cherry picker to give the sign a face-lift.

The accompanying photo caption noted the Dr Pepper sign was first installed downtown in the 1950s.

“The parent company, Dr. Pepper Snapple Group, sells more Dr. Pepper in the Roanoke Valley area of Virginia than any other metropolitan area east of the Mississippi River,” the caption notes. “In the past, the city has been named the ‘Dr. Pepper Capital of the World,’ and broke world records for its mass consumption of the beverage in the late 1950’s.”

The soft drink’s origins have been debated for decades. According to a 2010 article by my ex-colleague, Duncan Adams, in the 1960s the soda was known as “America’s most misunderstood soft drink.”

Some of the available information suggests it might have been named for a Dr. Pepper here in Southwest Virginia. But there were two different physicians with that surname, which is where things, like the drink when spilled, get a little sticky. And aside from that, neither doctor invented the elixir.

The creator was Charles Alderton, a New York-born pharmacist who worked at a drug store in Waco, Texas.

Dr Pepper debuted in 1885, about a year before the invention and first sale of Coca-Cola by another pharmacist in Atlanta.

Alderton worked for Morrison’s Old Corner Drug Store in Waco, which was owned by Wade Morrison. He named the drink and was reputed to be the first person other than Alderton to taste it.

Morrison had earlier lived in Christiansburg and worked as a pharmacy clerk there. That was documented in some U.S. Census papers from the 19th Century later examined by the Dr Pepper Museum in Dublin, Texas. (Yes, Dr Pepper has its own museum!)

Those records suggest Morrison and Dr. William Alexander Reed Pepper lived close to each other in Christiansburg at one time. Census takers went door-to-door back then, and Dr. Pepper the physician was recorded on the page immediately following the page upon which Morrison’s name was found.

Other parts of the legend say Morrison married Pepper’s daughter, and named the drink in honor of her dad. Her name was Mary Ann Pepper, and she went by “Minnie.” She was 16 at the time Morrison lived in Christiansburg, which was before he moved to north Texas.

Others have Long believed the drink was named after a different Dr. Pepper — a Dr. Charles T. Pepper of Rural Retreat. But the museum noted that, at best, Morrison and Charles Pepper lived at least 40 miles apart in the 1800s, a not inconsiderable distance at the time. No record of them ever crossing paths has been found.

And Charles T. Pepper’s only daughter was barely 8 years old at the time Morrison lived in Christiansburg, which makes any marriage between them unlikely.

Hopefully, that article will be updated to reflect the refurbished Roanoke icon, once it’s lighted again.

CHRISTIANSBURG — A New River Valley business owner is looking to sink the eight ball on a new project in the town.

CASEY: Roanoke (and plenty of other local governments) are hiring!

The pay's not necessarily great, but it's better than what some private employers are offering. And the benefits — at least for Roanoke municipal employees — can be hard to beat.

The city of Roanoke is scheduled to begin to replace the Depression-era Wasena Bridge this fall.

The H&C Coffee and the Dr Pepper signs at Williamson Road.

The H&C Coffee and the Dr Pepper signs, with the Mill Mountain Star shining in the left background.

The Dr Pepper sign sits atop the Legg Mason Building at the corner of Campbell Avenue and Williamson Road in a 2010 file photo.

Budget Sign workers elevated with a lift are silhouetted in the foreground of the Dr Pepper sign in downtown Roanoke during 2013 repairs.

A file photo by Don Petersen of of the H & C sign in its neon coffee pouring glory days.