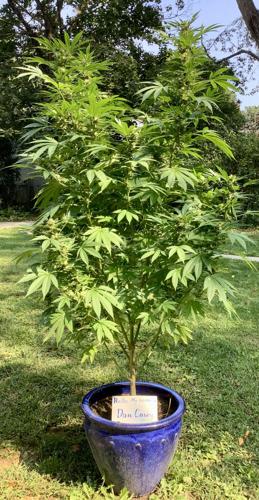 Behold ‘Dan Casey,” an 8-foot marijuana plant growing in the New River Valley. Its grower is a reader who asked to remain nameless. 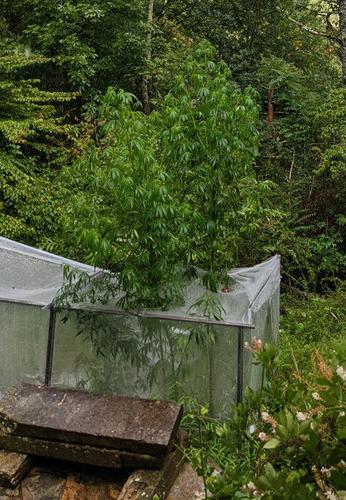 This plant – the strain is Kaliram Hash – was 16 feet tall in August, cultivated by a lawyer in Floyd County. It far outgrew its temporary greenhouse. God only knows how tall it is now. 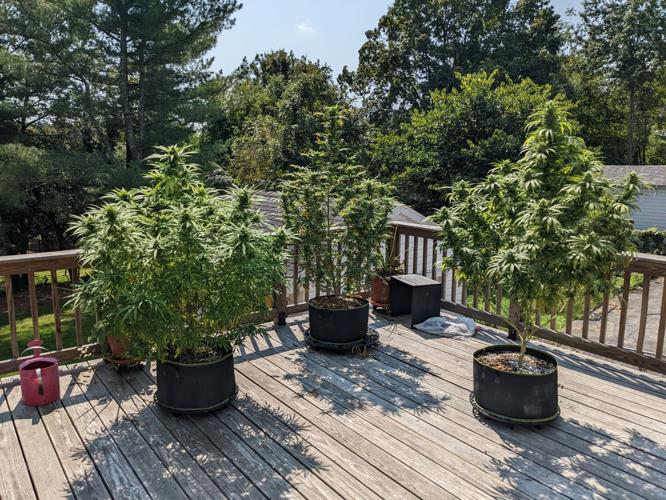 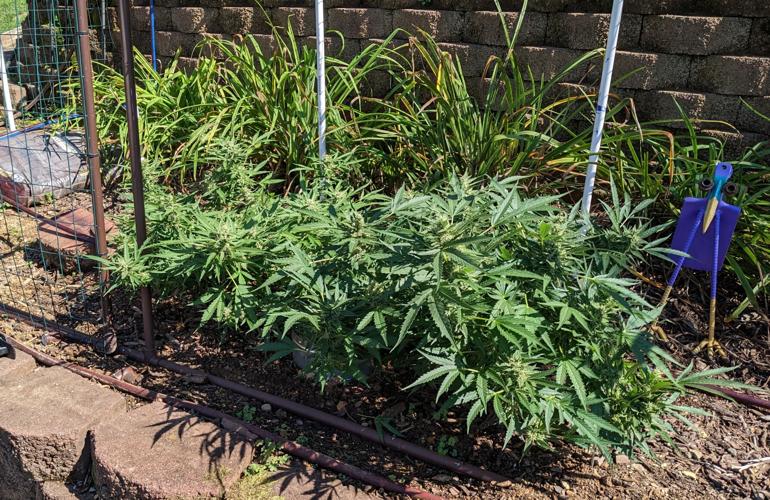 This plant, garden-grown by a reader in Grandin Court, is miniature marijuana. You could call it “Bonsai pot” except Bonsai plants by definition are in containers. Its Vietnam-veteran owner trained the branches to grow close to the ground. 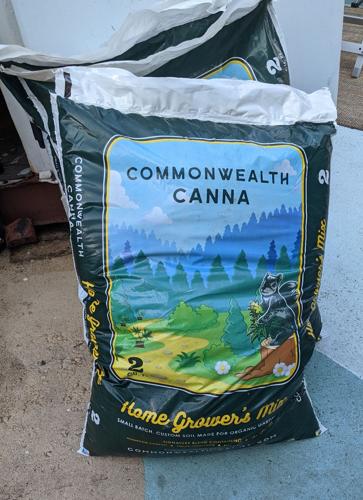 Commonwealth Canna, a company based outside Richmond, manufactures and markets a “living soil” especially designed for marjuana-growing. A 2-cubic-foot bag (which will fill a 15-gallon pot) goes for $25.

It’s unclear how many legal cannabis plants were raised in Western Virginia this summer, the first full season that outdoor pot-growing was legal since the law changed in 2021.

But judging by the many weedy images readers have shared with me, the number must be considerable.

I’ve seen everything from a Vietnam veteran’s miniature marijuana growing in a Grandin Court back garden, almost Bonsai-style, to a 16-foot behemoth raised by a lawyer in Floyd.

A woman from Covington emailed an image of a bug that killed one of her plants — it proved to be the dreaded Eurasian hemp borer. A Roanoke physician proudly showed me a photo of his lush indoor bush, on his phone.

Another reader in the New River Valley named her plant ‘Dan Casey.’ She asked me not to publish her name because of her occupation, which I won’t publish either. (Unlike yours truly, many people are still shy about their pot gardens.)

We’re probably still months away from consumption, because all that weed needs to be dried and cured first. And that suggests Western Virginia will have a very chill winter holiday season in more ways than weather.

I started this fun project in May. For giggles, and to inject a hint of scandal, I named eight plants after area politicians. Three grew up to be boys — Rep. Morgan Griffith, Rep. Ben Cline and Del. Sam Rasoul.

Those were killed as soon as they began exhibiting male sex characteristics. That’s because at its core, marijuana farming is a truly sexist endeavor. The goal is to raise female plants that are pristine and unsullied by any male pollen. That’s how you get big, sticky, potent buds.

As with human civilization, males tend to screw everything up. In fact, male cannabis plants are even worse than useless, because if their pollen connects with a female plant, she’ll begin making seeds rather than the seedless psychoactive flowers many people love.

The last two I gave to friends, because Virginia’s home-grow law limits the number of plants per household to four. Naturally, I wanted to stay legal.

In August, I got some volunteer help from a Virginia company named Commonwealth Canna. It’s headquartered outside Richmond but has some Roanoke associates who market its products here.

One of their guys — he asked to remain nameless, too — stopped by my house and “lollipopped” the Chris Head plant, which means he chopped off the lowest branches and took off a lot of the interior leaves. He promised the result would be bigger and thicker buds on what remained.

And mercy — he wasn’t kidding. Chris Head has the biggest and stickiest buds of my plants. It looks like he’s holding about a pound of pot. Also, the whole deck stinks of weed.

Commonwealth Canna manufactures and sells Virginia-produced “living” soil that’s tailored for growing marijuana.A 2-cubic-foot bag (roughly, 15 gallons of dirt) sells for $25. The company also markets soil and nutrients as a package for $119, and they offer cannabis grow classes. In August, they held a meet-and-greet event at Golden Cactus Brewing downtown.

The Marie March plant is the lushest and bushiest on my deck. The Sherman Lea plant is the tallest but has been the most problematic. Lots of its leaves started turning yellow then brown in August. And they still are.

The expert from Commonwealth Canna advised me its buds were developing well, and I should simply pull off the discolored leaves. (Depending on the strain, this is the time in the growing season when marijuana leaves often begin exhibiting color changes, he said.)

The David Bowers plant is growing on a porch in southwest Roanoke. Its owner “lollipopped” Bowers, similar to the Chris Head plant. It’s got substantial buds, and a lot of yellowish leaves.

The Bob Good plant is growing in a field in Floyd County, and crazily. In size and appearance, it looks like the champion of the seven plants that I nurtured from seeds. (Marie March was a 6-inch cutting I picked up at a cannabis festival.)

Some of Bob Good’s branches are so weighted down with buds that they’re now bending downward. The plant’s at least 5 feet wide, and it’s substantially taller than that.

Now let’s get back to the Dan Casey plant.

Its owner, a woman, is exceedingly shy about people knowing she’s an aficionado of wacky tobacky. Only a few friends in her walking group know her secret, she confided. And they’re having a lot of fun with it now that it bears my name.

She estimated it stands about 8 feet tall. And she even made a beautiful hand-lettered sign bearing my moniker.

I feel honored. It’s even better than having a beer named after me, like Big Lick Brewing Co. did a few years ago. (By the way, they’re still making and selling delicious and thirst-quenching Casey’s Kolsch seasonally.)

Sometime late this fall, I’ll get together with the humor-minded grower of Dan Casey. Maybe I’ll trade her some Marie March weed for my namesake bud.

Rumors are, Dan Casey weed has magic powers that actually bend reality. Apparently, it’s more potent than LSD and PCP combined. As few as two tokes will make you believe Donald Trump wants to make America great again, rather than fill his pockets with donations from ignorant suckers.

For that reason, my advice to you is to stay as far away from Dan Casey weed as possible.

That way there’ll be more for me.

Radford University enrollment is down more than 6% this fall, officials said.

U.S. Attorney Christopher R. Kavanaugh said Thursday that the owner of The Knights Inn was aware of criminal activity that took place at the hotel, encouraged it and profited from it.

Nancy and Bill Landes spent six months asking their new wireless carrier, T-Mobile for help with poor reception on their new phones. The chief result was a nearly $450 T-Mobile bill the Landeses felt they didn’t owe. Your humble metro columnist got it straightened out in 3 hours.

Teirra Shanae Poindexter is to be sentenced in January.

Fire Station No. 1 is now back in service to the public as an eclectic redevelopment that showcases the work of Roanoke-based furniture craftsmen and will soon host an upscale restaurant and boutique hotel.

The two members of the House of Delegates were at a Republican Party dinner in Wytheville.

Joshua R. Donahue, 47, of Roanoke died after suffering from what officers say looked like a self-inflicted gunshot wound. The Virginia State Police are investigating the incident.

A development and its status involves numerous candidates.

The part officials are primarily seeking input on is the so-called eastern terminus of the connector between the bypass and Merrimac Road.

A hotel and townhome project planned for site near the Interstate 81 park-and-ride has received a planning commission recommendation.

Behold ‘Dan Casey,” an 8-foot marijuana plant growing in the New River Valley. Its grower is a reader who asked to remain nameless.

This plant – the strain is Kaliram Hash – was 16 feet tall in August, cultivated by a lawyer in Floyd County. It far outgrew its temporary greenhouse. God only knows how tall it is now.

This plant, garden-grown by a reader in Grandin Court, is miniature marijuana. You could call it “Bonsai pot” except Bonsai plants by definition are in containers. Its Vietnam-veteran owner trained the branches to grow close to the ground.

Commonwealth Canna, a company based outside Richmond, manufactures and markets a “living soil” especially designed for marjuana-growing. A 2-cubic-foot bag (which will fill a 15-gallon pot) goes for $25.