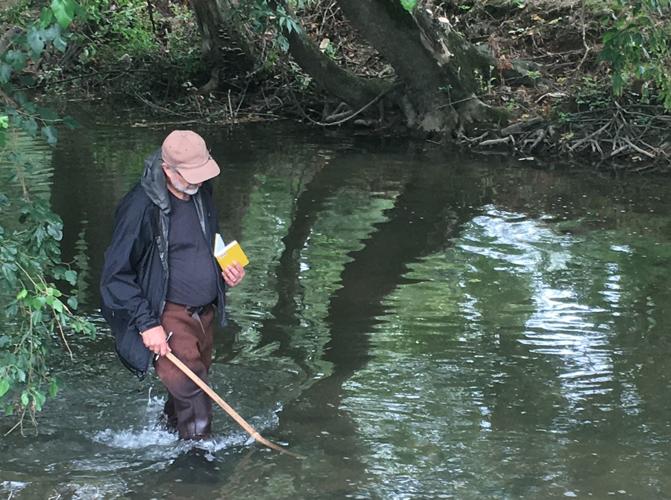 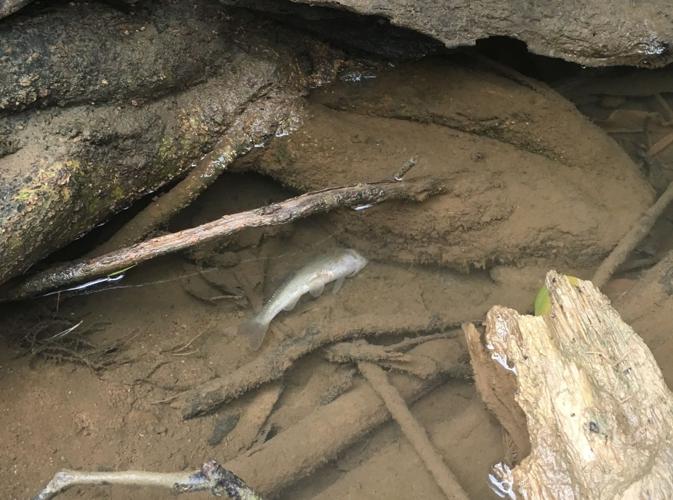 Dead fish float Saturday beside the bank of Tinker Creek, downstream of what officials said was an chemical spill that had been washed into the creek by rainfall.

A small puncture in a plastic tank holding an agricultural-use chemical caused a spill that killed thousands of fish in Tinker Creek, environmental officials said Monday.

The release has been contained and there are no reports of public exposure, according Bill Hayden, a spokesman for the Virginia Department of Environmental Quality.

Officials are investigating what caused a tank holding Termix 5301 to spring a leak over the weekend at Crop Production Services on Simmons Drive in Cloverdale.

Termix 5301 is a substance that is added to herbicide and pesticide products before they are applied to crops.

At the time of the leak, the chemical was being held in a 250-gallon plastic tank, with steel reinforcements around the outside, in a fenced-off storage area. The tank was less than 30 months old, leading officials at Crop Production Services to wonder if the puncture was caused by an accident or an act of vandalism.

“Something struck the tank from the outside,” said Tim Smith, a manager at the business. “It was not a failure of the tank itself.”

Once the chemical began to leak, rain washed an estimated 165 gallons into a tributary of Tinker Creek.

By early Saturday, dead fish could be seen along the tributary in Botetourt County and downstream as Tinker Creek flows south through Roanoke County. DEQ officials said the death count could reach the tens of thousands on a stretch from Clearwater Avenue to Hollins Road, a distance of about 4.5 miles.

All sizes and types of fish were affected. The most visible kills were of sunfish, rock bass, smallmouth bass and large suckers. Smaller species such as minnows and darters also perished, as did crayfish.

Residents of the area should avoid using the creek until further notice, DEQ officials said. That means no swimming, fishing, or using the water for crops or animals.

Crop Production Services has accepted responsibility for the spill and has hired a hazardous materials removal company for the cleanup.

“We do apologize for the impact this had on our neighbors and the fish in nearby Tinker Creek,” Smith said.

Although the chemical and the soil it saturated in the immediate area of the spill have been removed, the contamination downstream could not be eradicated because it has already dissolved into the water. By Sunday afternoon, foam and cloudy water caused by the chemical had largely dissipated, Hayden said.

The Termix 5301 that leaked was being stored in higher concentrations than what is applied to crops. But Smith said the level was within the manufacturer’s guidelines. Crop Production Services ships the chemical to farming customers along the East Coast.

Drinking water in the area was not affected.

Tinker Creek does not drain into any of the four reservoirs that supply public water to customers of the Western Virginia Water Authority. The risk to private wells along the creek is “extremely low,” DEQ said, because their water supply does not come from the surface runoff or groundwater seepage that flows into the creek.

DEQ will continue to monitor the creek and oversee its cleanup.

More than a dozen locations have been checked, from where the creek enters the Roanoke River to the spot just upstream of the spill. In nearly all of the locations, the appearance of the stream has returned to normal.

“Once the material is diluted and flushed downstream, no long-term impacts to the stream are anticipated,” Hayden wrote in a statement Monday.

As the fish decompose and float downstream, there will be “several days of unpleasantness along Tinker Creek,” Hayden wrote. “However, the stream will recover from the kill and life will return.”

The statement from DEQ addressed the following questions:

How will you know when the creek is safe for residents to use?

The creek is being monitored for the presence or absence of chemicals. Information will be communicated to residents once the creek is safe for recreation.

Is there an elevated health risk to the public following this leak?

At this time the chemical release has been contained, and there are no reports of public exposure. Only those individuals who came into direct contact with the chemical or were in the immediate area of the creek would have a potentially elevated risk of exposure. State and local agencies continue to monitor the situation.

What should I do if I'm concerned about potential exposure?

The chemical may pose a health risk only at high concentrations. It may be harmful if swallowed or touches the skin; it may cause skin burns and eye damage. If you are concerned about potential exposure, contact your physician, the Poison Control Center (800-222-1222) or the Roanoke City Health Department (540-283-5050).

What caused the container to leak?

The container had a small puncture, about one-third of the way from the bottom of the 265-gallon tank. The cause of the damage to the container is under investigation.

Why were residents told to avoid Tinker Creek?

Early in the incident, the cause of the fish kill was not known. Residents were advised to avoid Tinker Creek out of an abundance of caution and to allow the response and investigation to proceed.

I have a well located close to Tinker Creek. Is my well at risk due to this spill?

Risk to wells along Tinker Creek is extremely low. This is because water in Tinker Creek originates from surface runoff (rain) and from groundwater that discharges from the banks of the creek (seeps). This is how creeks and rivers continue to flow between rain events. Wells are, in general, at greater risk from oil and chemical spills occurring on the land in proximity to the well.

Will I know if my well is impacted? What will happen if my well becomes contaminated?

Unless a well is located close to Tinker Creek and is already impacted by surface water, it should not be affected by this release. Wells that may be affected would be addressed on a case-by-case basis.

How many fish were killed?

Surveys conducted by biologists have not determined yet how many fish were killed. Initial estimates are that the number may be in the tens of thousands. This includes all sizes and types of fish, including sunfish, rock bass and smallmouth bass, large suckers, and many smaller species such as minnows and darters.

What will happen to all the dead fish?

Fish kills, even large ones, occur due to natural causes as well. The fish will begin to decompose and also will float downstream, which likely will lead to several days of unpleasantness along Tinker Creek. However, the stream will recover from the kill and life will return.

Were other animals killed?

Yes, there were dead crayfish. The investigation team will note if any other animals were affected.

How will this chemical be cleaned up?

In the area where the spill occurred, remaining product is being removed and soils contaminated by the product are being excavated and disposed of. The product that entered Tinker Creek is unrecoverable because it mixes with the water. DEQ returned to check the stream on Sunday, July 30, and the foaminess and cloudy appearance caused by the product had almost completely disappeared. Some residual foam may be noticeable in areas where the stream goes over riffles, rapids and dams, as the material mixes with the air and water.

My pet drank or swam in Tinker Creek when there were dead fish present. What should I do?

Where the material was present in the water, the stream exhibited a cloudy appearance and heavy white foam. Bathing with soap and clean water should remove the material from the skin. Pet owners should contact their veterinarians if they have reason to believe the pet was exposed and shows signs of illness. Pets and livestock should never be allowed to drink directly from a stream, as they run a similar risk of contracting illness from untreated surface water as humans do.

Who is responsible for cleanup?

The company accepted responsibility for the release and hired a hazardous materials cleanup contractor. All of the recoverable material and contaminated water and soil that were identified was removed by the contractor before the end of the day on Saturday. Other areas have been sampled, and additional cleanup will be done if the material is found elsewhere.

What is DEQ doing now and in the future?

DEQ will continue to focus on water quality monitoring and overseeing the cleanup. DEQ may determine that enforcement action is appropriate as the investigation proceeds.

What other agencies are involved with the situation and what are their roles?

The U.S. Fish and Wildlife Service is responsible for assessment of damages to natural resources and the presence of federally listed threatened and endangered species.

What are the long-term impacts?

Where the material was present in the water, the stream exhibited a cloudy appearance and moderate to heavy white foam. DEQ checked the stream at more than a dozen locations, from near the mouth at the Roanoke River, to above the confluence with the impacted tributary at Route 11 in Cloverdale. At almost all locations, the appearance of the stream had returned to normal for this time of year. Once the material is diluted and flushed downstream, no long-term impacts to the stream are anticipated. It ultimately may take several years to return to normal, but the stream will recover and aquatic life will repopulate the affected areas.

The recreation advisory placed on Tinker Creek following a chemical spill at a Botetourt County business two weeks ago has been lifted.

What is the Florida Python Challenge?

Dead fish float Saturday beside the bank of Tinker Creek, downstream of what officials said was an chemical spill that had been washed into the creek by rainfall.