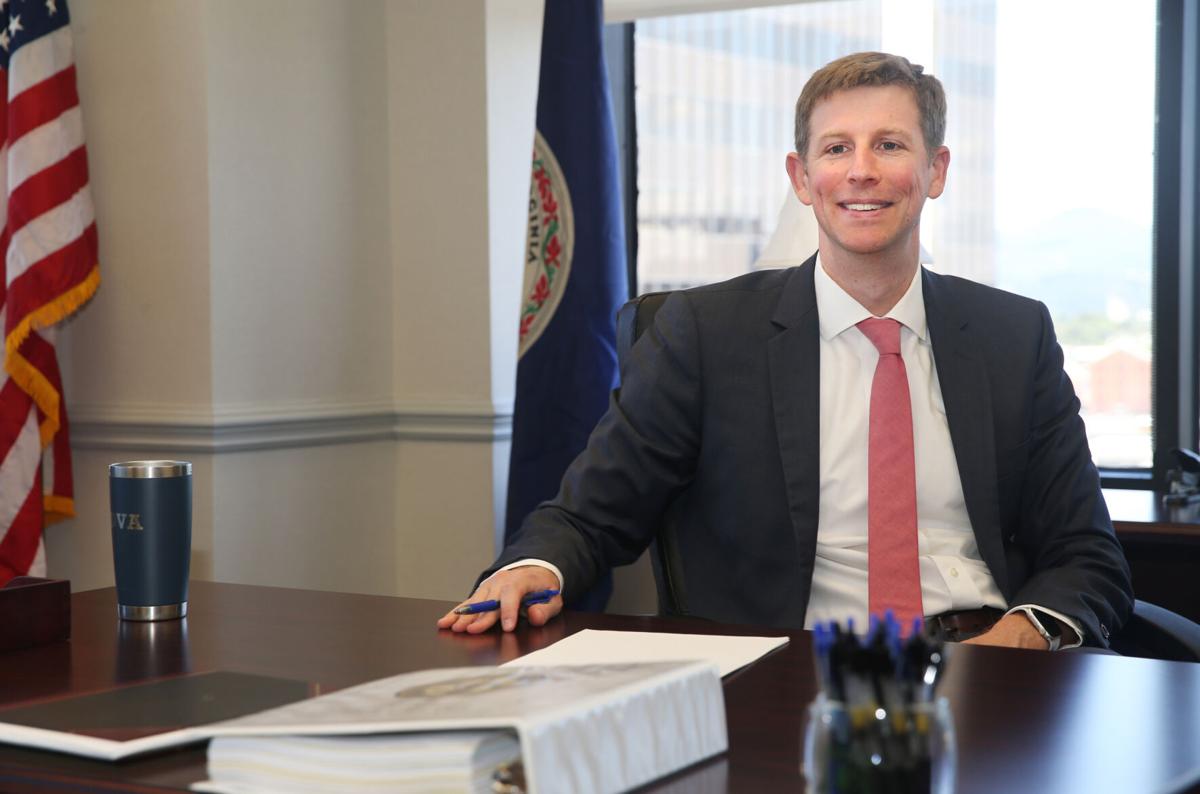 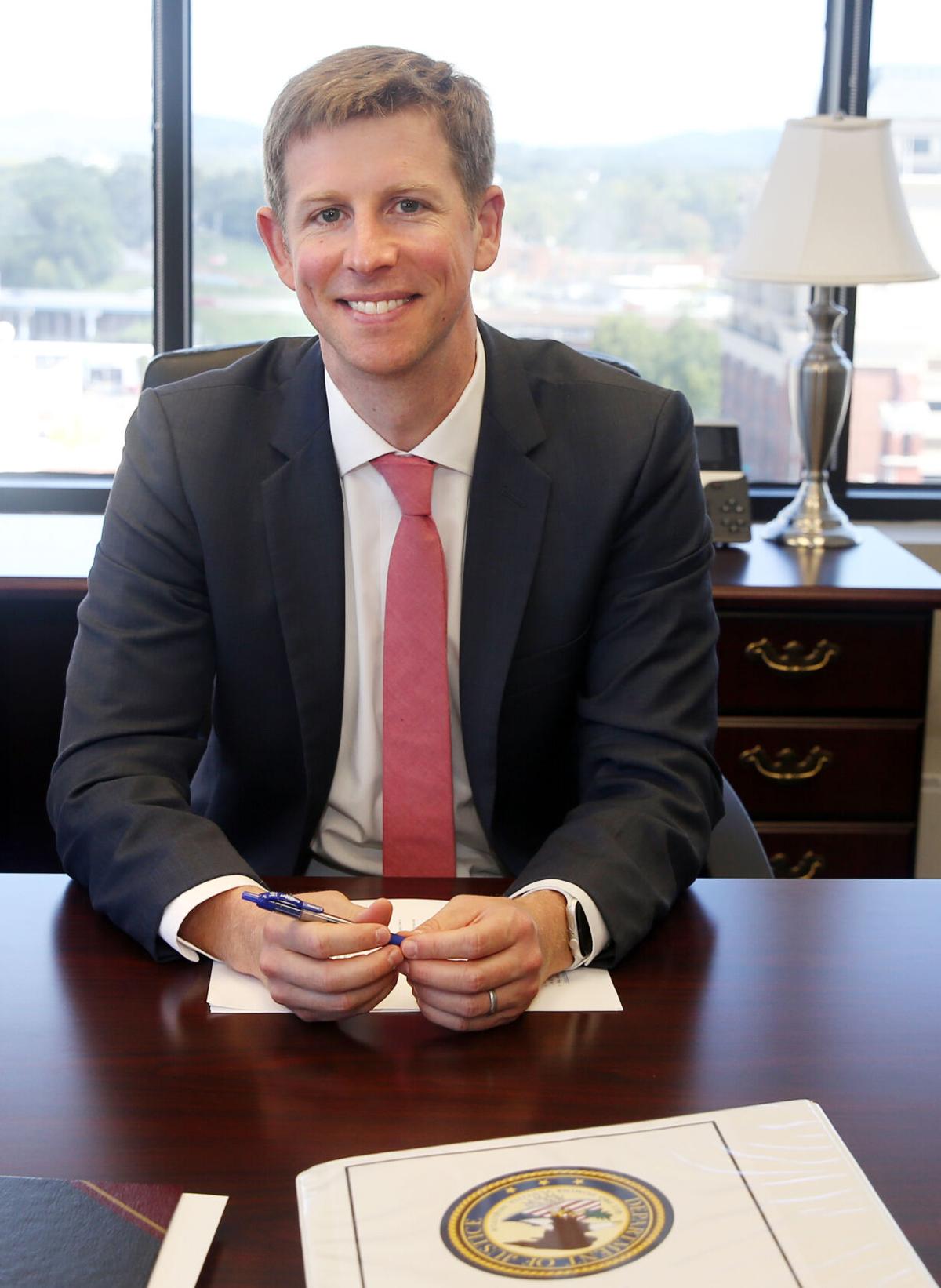 Chris Kavanaugh, the new U.S. attorney for the Western District of Virginia, is pictured on his first day on the job in the U.S. Attorney's Office in downtown Roanoke on Tuesday. 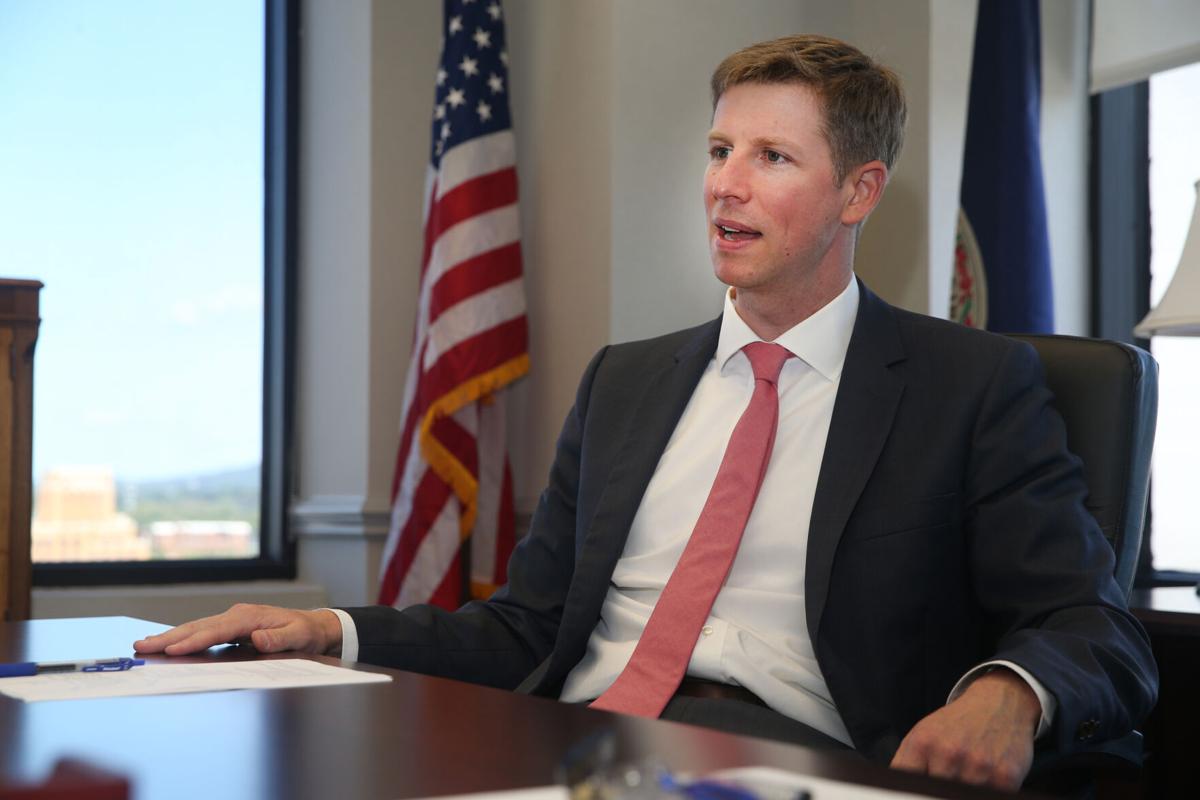 Tuesday was Chris Kavanaugh’s first day in a new job, but as U.S. attorney for Western Virginia he found himself on familiar ground.

After working as an assistant U.S. attorney in Charlottesville for seven years, and holding the same position in Washington, D.C., for seven years before that, Kavanaugh was appointed last week to a job he calls “the honor of my life.”

As he sat behind a clean desk in his office in downtown Roanoke, Kavanaugh outlined some of his priorities in heading the prosecution of federal crimes in the Western District of Virginia.

It is a broad swath of the state that consists of 46 counties and 17 cities stretching from the Lynchburg region all the way west to Lee County and as far north as Winchester.

A growing concern is domestic terrorism, which the 41-year-old career prosecutor dealt with in Charlottesville during the trials of James Fields and other white supremacists who gathered for the Unite the Right rally in 2017.

Fields was sentenced to life in prison with no parole for driving his Dodge Challenger into a crowd of counterprotesters, killing Heather Heyer and injuring 35 other people.

“The defendant’s crimes were so horrendous, and the maiming of innocents so severe, that they outweigh any factors” that Fields might cite in seeking leniency, Kavanaugh wrote at the time in a sentencing memorandum.

“This is particularly true in light of the fact that he has demonstrated that he feels no remorse for his actions and continues to espouse his hateful ideology.”

As the district’s chief national security prosecutor, Kavanaugh was involved in other cases and helped train fellow prosecutors. More recently, he was assigned to the deputy attorney general’s office in Washington, D.C., where he helped with the cases of Donald Trump supporters who stormed the U.S. Capitol on Jan. 6.

Kavanaugh declined to discuss details of his involvement in that case Tuesday.

In the Western District, he plans to focus on domestic terrorism, hate crimes, civil rights violations, violence in the inner cities and prescription drug abuse — among the many other cases that will cross his desk.

Although he will continue to live in Charlottesville and work out of the U.S. attorney’s office there, Kavanaugh plans to have a regular presence at the two other district offices in Roanoke and Abingdon.

Roanoke is the largest branch of an office and includes 28 prosecutors.

In the beginning, Kavanaugh will spend a lot of time behind a steering wheel as he meets with the local police departments, sheriff’s offices and commonwealth’s attorneys spread throughout the district.

“One of the first responsibilities of a U.S. attorney is to be able to form relationships with a wide variety of stakeholders,” he said.

At the same time, he said, “I absolutely need to reconnect with the folks here” in the Roanoke office, many of whom he has worked with in the past. “They don’t have to win me over,” he said, “because I know the work they are doing every day.”

Kavanaugh has practiced before all of the judges in the Western District, which has seven courthouses. In his new job, the bulk of his work will be administrative.

Some of the office’s policies will be guided by the administration of President Joe Biden, who nominated Kavanaugh for an appointment that was confirmed last week by the Senate.

In June, Attorney General Merrick Garland announced that he was imposing a moratorium on federal executions while the Justice Department conducts a review of its policies and procedures. He gave no timetable.

Under the administration of former President Donald Trump, the Justice Department authorized federal prosecutors to seek the death sentence for Samuel Silva, who is charged with killing a fellow inmate in the U.S. Penitentiary in Lee County.

It was not clear how the moratorium will affect Silva’s case, which is not scheduled to go to trial until next May.

Following his Senate confirmation, Kavanaugh was sworn in Thursday evening by Deputy Attorney General Lisa Monaco at a ceremony in Washington, D.C.

He then returned to Charlottesville, and was in Roanoke on Tuesday for his first day on the job.

In a written statement, Kavanaugh said he was “looking forward to working closely with our law enforcement partners, defense counsel, and the court in serving the District.”

Chris Kavanaugh, the new U.S. attorney for the Western District of Virginia, is pictured on his first day on the job in the U.S. Attorney's Office in downtown Roanoke on Tuesday.