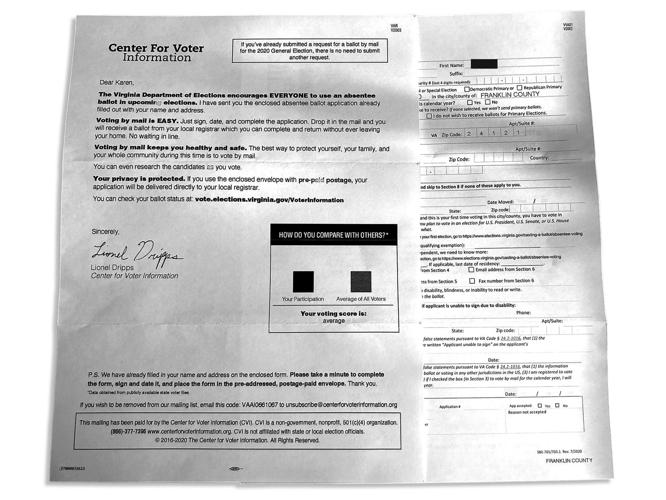 Thousands of voters across Virginia received pre-printed absentee ballot applications in the mail this week from the Center for Voter Information. While the applications are valid, some of the return envelopes were incorrectly addressed.

This week, thousands of residents in Roanoke, Roanoke County and Franklin County have received applications for absentee ballots from the Center for Voter Information, a Washington, D.C.-based group that provides information about candidates and elections. The pre-filled applications for ballots are legitimate, but the addresses on return envelopes are wrong.

The mistake confused voters and caused a massive headache for the city and county registrars, who spent much of Wednesday and Thursday answering calls from voters demanding to know if the mailers were part of an election fraud.

The misaddressed mailers further complicated an election season when many voters are considering absentee and vote-by-mail options for the Nov. 3 races that are happening in the midst of the COVID-19 pandemic.

More than 47,000 residents in Roanoke and Roanoke County received the incorrect mailers, according to information that the Center for Voter Information sent to registrars. According to a CVI email that was forwarded to The Roanoke Times, applications with the wrong return envelopes were sent to 29,922 Roanoke voters and 17,225 Roanoke County residents.

CVI informed registrars that the group’s mail campaigns generate an average return rate of “about 8%,” according to the email, which would mean Roanoke and Roanoke County registrars could see about 3,800 absentee applications mailed to the wrong offices.

The CVI email also said that the group will offer to send prepaid FedEx or UPS slips to registrars so they can mail applications to the correct offices.

CVI’s website states that the group, as well as its partner organization the Voter Participation Center, is “a non-partisan and non-profit organization that works to provide even-handed and unbiased information about candidates and their positions on issues.”

The group focuses on what it calls the “Rising American Electorate” that consists of women, minority and young voters. The group says that it has registered more than 5 million voters since it was founded in 2003.

Roanoke County Registrar Anna Cloeter, however, said CVI sows confusion among the local electorate. In the past, CVI has sent registration forms to voters who no longer live at an address, or to deceased people or even to their pets, she said.

Voters who have already returned absentee applications sometimes receive additional applications from CVI, said Cloeter, whose office staff then must deal with often angry reactions from voters confused by the mailings.

“We get calls from angry people saying that we’re trying to trick them even though we have no control over it,” Cloeter said. “We have nothing to do with it. Honestly, they seem to confuse more people than anything else.”

Friday morning, Jonathan Shapiro, the chief executive officer of the company that printed the envelopes, took responsibility for the error. He said that a spreadsheet misaligned voters with their election offices in jurisdictions where a city and a county share the same name. Nobody caught the mistakes before the applications were mailed.

"We did not send the spreadsheet to CVI for review, and our own internal proofing procedures failed to catch the mistake," Shapiro said in a statement released Friday. "The error was entirely ours.

"We are keenly aware of the seriousness of this mistake. We added to the burden already felt by local election boards and made their jobs significantly harder. Worse, this error created confusion for voters who are trying to exercise their right to vote from home, safely and conveniently. And we violated the trust that CVI places in us as their print vendors."

Tom Lopach, Center for Voter Information’s chief executive officer, said that CVI will work with local officials to get applications to the right registrars' offices at its own expense.

He said that his group will continue its efforts to register more voters and raise awareness of absentee and vote-by-mail options, especially during a pandemic that has made registering to vote more difficult for some.

“During a pandemic, when departments of motor vehicles and person-to-person voter engagement has largely been sidelined, our work to register voters and help voters vote by mail is more important than ever,” Lopach said in an interview Thursday.

The Virginia Department of Elections released a statement that the department “has no affiliation with this group nor coordinates with any third party groups on campaign efforts.” The department encouraged Virginia voters to apply for absentee ballots on its website, www.elections.virginia.gov/voterinformation.

Virginians can vote in any one of three ways this November: in person on Election Day at the proper precinct, early at the registrar’s office from Sept. 18 to Oct. 31, or absentee by mail.

Virginia does not require a reason to vote absentee. Voters do not need to make appointments with registrars to vote early, but social distancing and facial coverings are required.

Other Virginia localities also received wrong return envelopes. Some Franklin County voters received envelopes addressed to the city of Franklin, located in the eastern part of the state.

Franklin County Registrar Kay Chitwood said her office has been fielding calls from registered voters about the mailings.

She said she’s been in contact with the Franklin registrar and has agreed to forward any applications her office receives in error to the registrar there. That registrar has pledged to do the same for Franklin County voters.

As many as a half-million Virginia residents received applications from CVI that are addressed to the wrong registrar, the group said in a statement emailed to The Roanoke Times.

“Mistakes in our programming are very rare, but we take them seriously, and our methods overall are extraordinarily effective,” the statement said. “We know voters are on high alert as the November election approaches, and we regret adding to any confusion. Please rest assured that we are working with local election officials in Virginia to re-direct the vote by mail applications to the proper locations, and will rectify any errors at our own expense.”

The error has compounded what has already been a difficult election year for local registrars, who are seeing more applications for absentee ballots during the pandemic and are in need of more volunteers because many poll workers are older and might not be available while the virus still spreads.

Roanoke’s registrar’s office has received more than 4,000 absentee applications, Cochran said, a 10-fold increase from the same point in 2016.

Roanoke will also have a long ballot this year that will include presidential, House of Representatives, U.S. Senate, mayoral and city council candidates, as well as two Virginia constitutional amendments. An expected high turnout and social distancing while standing in line could also make in-person voting more time-consuming.

“Conducting an election during global pandemic has its challenges,” Cochran said.

CHRISTIANSBURG — A New River Valley business owner is looking to sink the eight ball on a new project in the town.

CASEY: Roanoke (and plenty of other local governments) are hiring!

The pay's not necessarily great, but it's better than what some private employers are offering. And the benefits — at least for Roanoke municipal employees — can be hard to beat.

The city of Roanoke is scheduled to begin to replace the Depression-era Wasena Bridge this fall.

People are noticing that the famous Dr Pepper 10 2 & 4 sign and the once-animated H & C Coffee sign have been only partially lighted for a while. And they want to know when those beacons will be fully shining again.

Thousands of voters across Virginia received pre-printed absentee ballot applications in the mail this week from the Center for Voter Information. While the applications are valid, some of the return envelopes were incorrectly addressed.