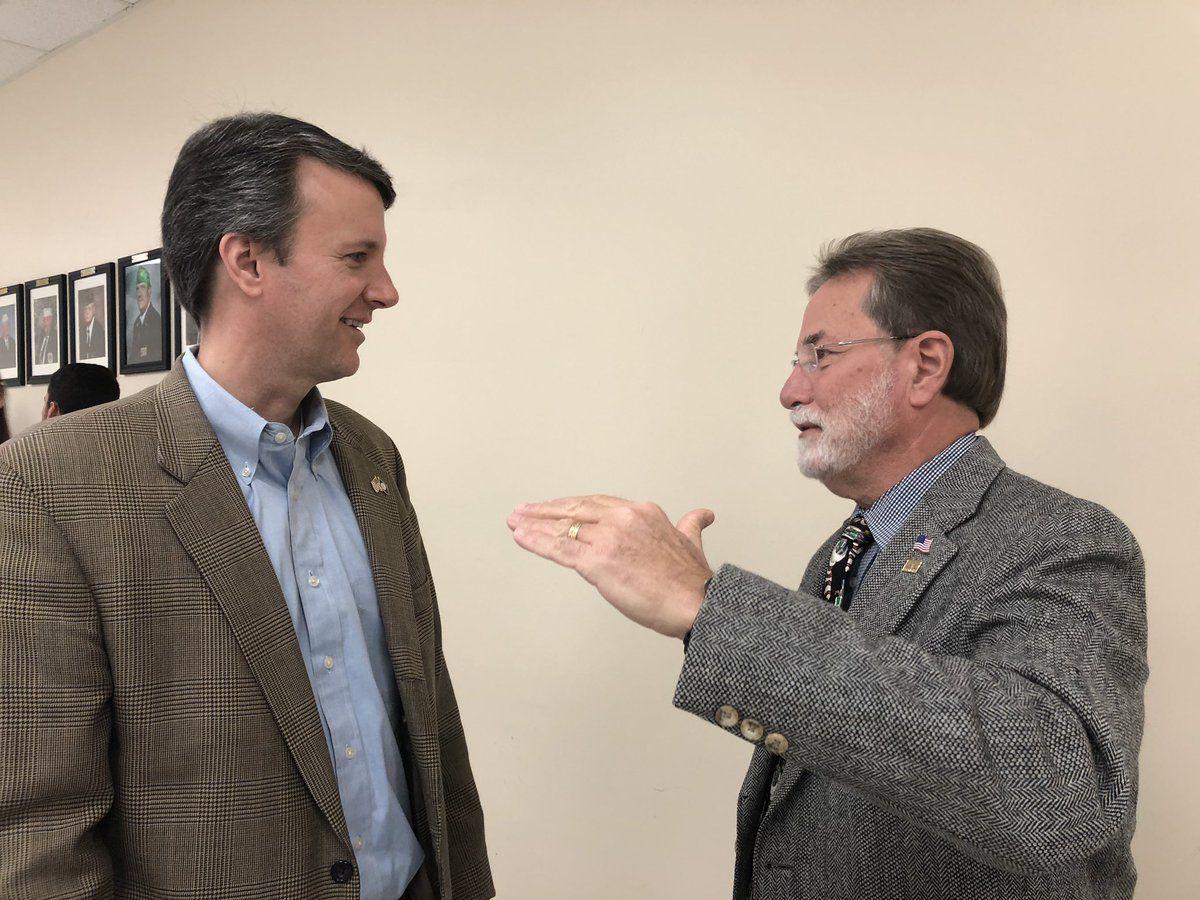 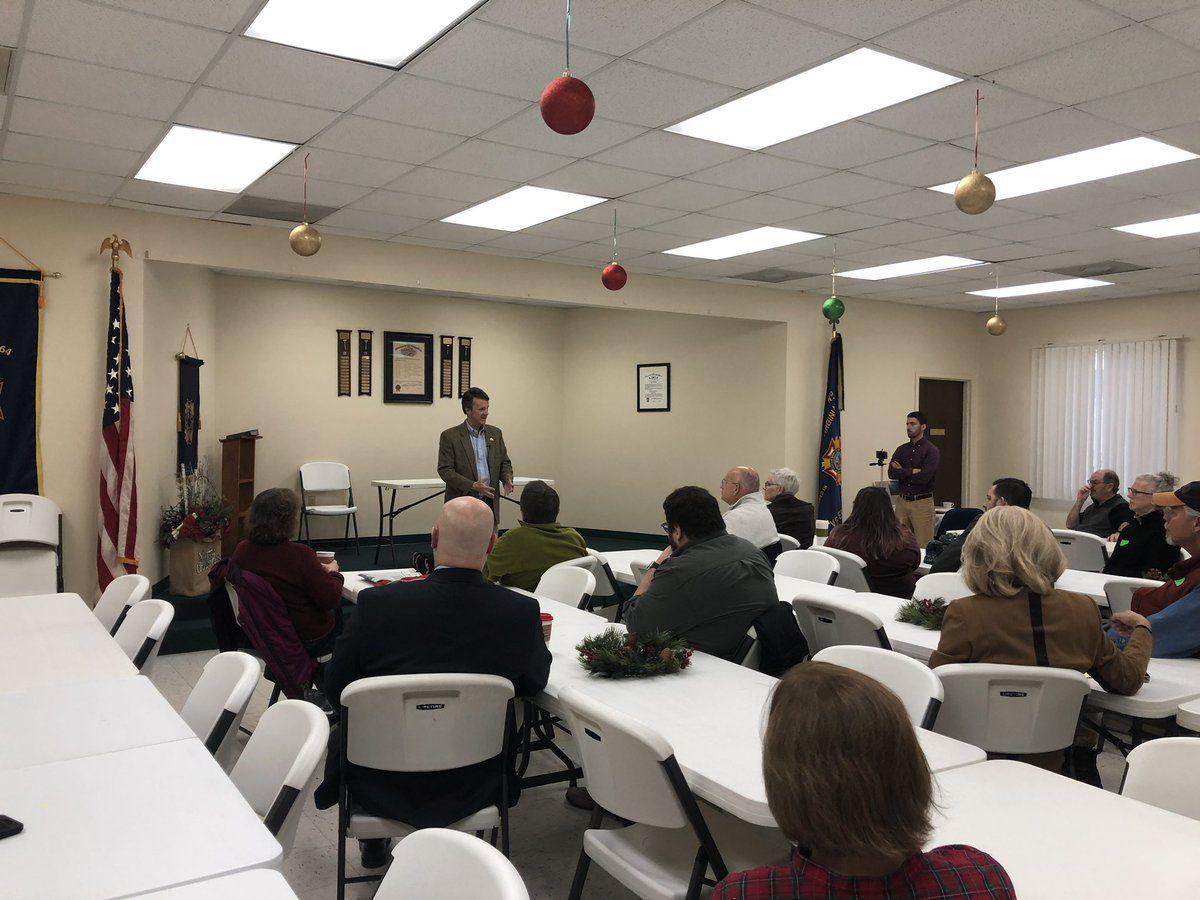 About 40 people attended a town hall in Roanoke with Congressman-elect Ben Cline on Wednesday morning.

Congressman-elect Ben Cline held his first town hall meeting on Wednesday since being elected to the House of Representatives last month, a move that dozens of attendees — many of whom didn’t vote for him — praised as an encouraging sign he is willing to listen.

“You all have great ideas,” Cline said. “The solutions to our problems in this country are going to come from the grassroots, from the ground up, from the people, not from politicians, not from Washington, D.C., not from the bureaucracy.”

The gathering at the Veterans of Foreign Wars Post in Roanoke kicked off a series of town halls across the 6th District that Cline, a Republican from Rockbridge County, will hold this week. He updated the audience on preparations ahead of his Jan. 3 swearing-in, such as establishing locations for his district offices, hiring staff members and considering which committees he’s interested in sitting on.

Most importantly, Cline said he wanted to hear from the roughly 40 people sitting in front of him. While there were some Republicans in the audience, it was mostly Democrats who peppered Cline with questions.

That’s what Cline intended. Roanoke is one of only four out of 19 localities that he lost in the election. The four — Roanoke plus Staunton, Lexington and Harrisonburg, the other sites of Cline’s town halls — are blue dots in the red district that stretches from Roanoke County to Front Royal.

“Those are the ones I want to hear from,” Cline said. “There was a disconnect during the campaign.”

Some Republicans in Congress have held town halls in recent years — particularly in the early months of President Donald Trump’s administration — that have been contentious. The one in Roanoke remained mostly cordial.

After he spoke in Roanoke, Cline went to the town hall in Staunton, where Jennifer Lewis, the Democrat he defeated last month, pressed Cline on how he’d protect immigrants brought to the country illegally as children. She also voiced her support for stamping out the influence of money in politics and cited her concern about Cline’s history of taking donations from the National Rifle Association and Dominion Energy.

Cline said he’d be glad to sit down later and speak with her further about her list of concerns.

Numerous questions at both town halls dealt with health care. Participants in Roanoke wanted to know how Cline, who is opposed to the Affordable Care Act, will ensure that people , especially those with pre-existing conditions, still have access to affordable health insurance.

“Throwing it out the door is not the answer,” Kevin Russell said.

Cline said he would strive to work across the aisle to address health insurance concerns. He said free-market solutions are needed to lower costs.

Cecil McWilliams, a member of the Veterans of Foreign Wars Post, said the partisan bickering in Washington, including Trump’s threat to shut down the government, is an “embarrassment.” He said he voted for Cline, but he issued a warning in case he didn’t see attempts at bipartisanship from Cline.

“I will vote against you next time,” McWilliams said. “I will be your worst enemy.”

Cline and town hall attendees were able to find points of agreement, such as interest in finding ways to lower the cost of higher education and helping people struggling with student debt. In response to concerns about voting rights and voter restrictions, Cline said it’s important that as many people as possible have access to voting booths, and he said he is interested in removing unreasonable voting restrictions.

Before asking their questions, a few people thanked him for hosting the town halls. They said it was a welcome change from how his predecessor, Rep. Bob Goodlatte, R-Roanoke County, has eschewed in-person town halls in recent years.

Cline said he planned to continue to hold town halls across the district throughout his term.

Ivonne Wallace Fuentes had a back-and-forth with Cline over Trump’s $1.5 trillion tax cut. She said that she hasn’t reaped the benefits in her paycheck that Trump suggested she would and that it appears to be benefiting the rich more than middle-class Americans. Cline said he supported the tax cut and would work toward figuring out how to cut federal government spending to combat the rising deficit.

“Thank you for your response, and I suspect we’ll be having this conversation for two years,” Fuentes said.

New Republican Reps. Ben Cline and Denver Riggleman entered a House of Representatives that Democrats took control of Thursday amid a partial …

Rep. Ben Cline is continuing his effort to hold town halls across the 6th Congressional District, with upcoming events in Botetourt County and…

About 40 people attended a town hall in Roanoke with Congressman-elect Ben Cline on Wednesday morning.