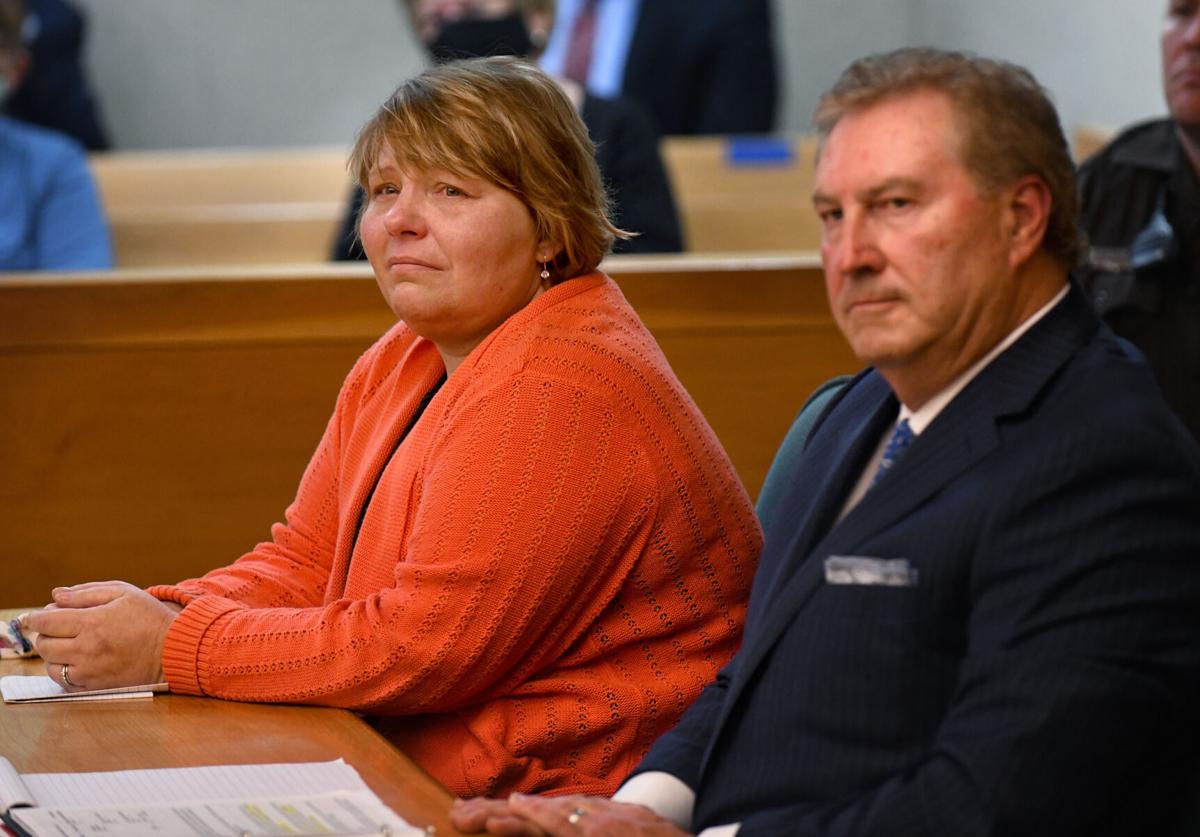 Amy Mauck Krohmer was sentenced to serve four years in prison and pay almost $200,000 in restitution in Roanoke Circuit Court on Wednesday. Krohmer had previously pleaded no contest to embezzlement of her former employer, West End United Methodist Church in Roanoke. She is with her defense attorney Tony Anderson. 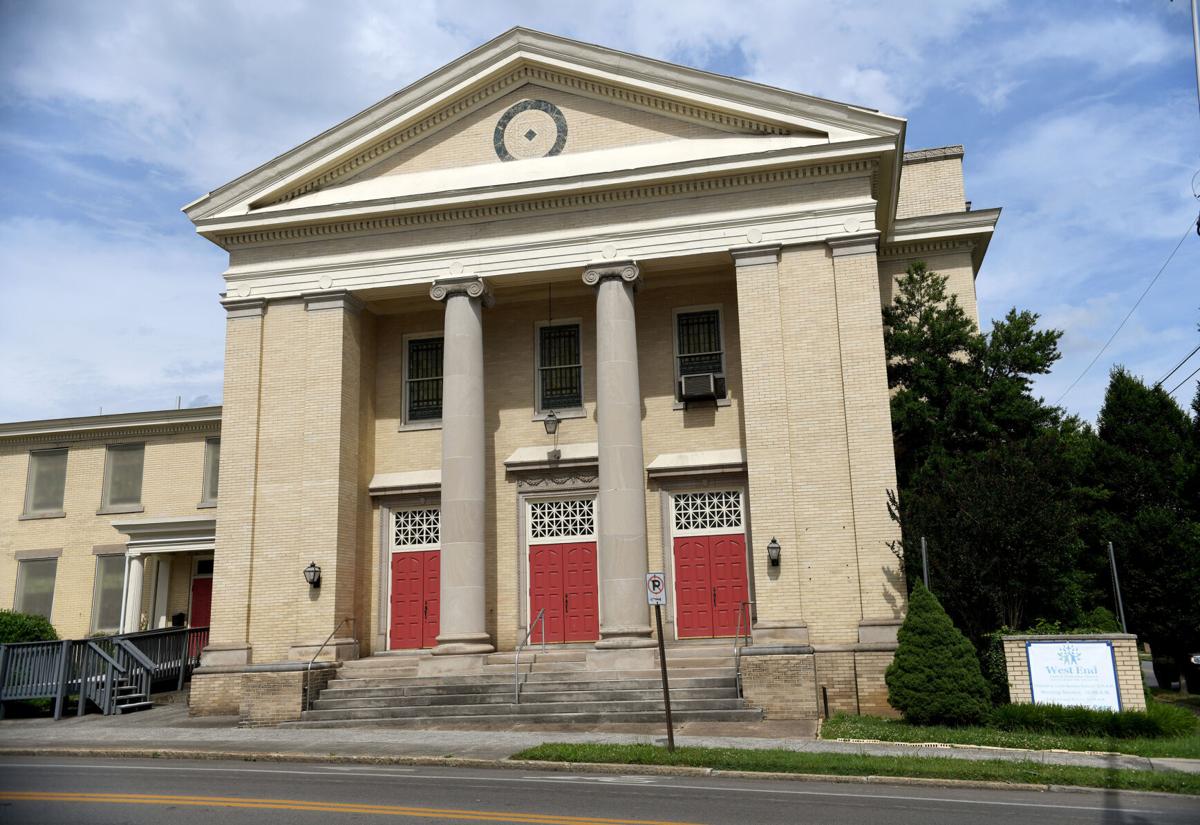 Citing what he called “likely the worst larceny embezzlement” he had seen in his 13 years on the bench, a Roanoke Circuit Court judge sentenced a former church secretary to serve four years in prison.

That ruling came Wednesday, some 21 months after the defendant, Amy Mauck Krohmer, pleaded no contest to a single count of embezzling from Roanoke’s West End United Methodist Church.

Krohmer, 45, also will have to pay $195,186.43 in restitution, the sum she was convicted of taking. She must make monthly payments in increments of at least $500, and will carry 16 years in suspended time. After her release, she will be on probation for five years and is not allowed to have contact with anyone from the church.

In leveling that sentence — with an active prison term that falls two months shy of the high end of state guidelines — Judge Chris Clemens also pointed to Krohmer’s prior conviction, in 2009, for obtaining and misusing a credit card on behalf of the Williamson Road Business Association, her employer at the time.

In that earlier case, prosecutors said, she had been charged with three felonies for taking between $4,000 and $5,000 from the organization, but she pleaded down to a single misdemeanor charge of filing a fraudulent credit application, and she ultimately served six days in jail.

“That previous larceny, in the same style, has to be factored in,” Clemens told Krohmer.

Clemens did offer her a window of hope framed by incentive, telling her that if she is able to pay off at least $100,000 of the restitution while still in custody, he will consider reducing her sentence by one year.

In the time since Krohmer entered her plea in September 2019, and while free on bond, she has paid $11,170 toward the restitution, money she said she earned by doing cleaning work.

At Wednesday’s hearing, Roanoke Deputy Commonwealth Attorney Donald Wolthuis said that in her capacity as church secretary, Krohmer had employed at least three methods of theft: using the church credit card to make personal purchases; writing unauthorized checks disguised as legitimate church expenses; and altering payroll checks, often by leaving space on her own $823 biweekly paycheck so that she could later increase their amounts by $1,000, or sometimes $2,000.

Much of the money taken appears to have gone toward paying Krohmer’s monthly utilities and bills, subscription services, and general purchases, Wolthuis said: “Hundreds and hundreds of transactions ... hundreds of conscious acts.”

He called as a witness James Sholes, a member of the 100-year-old church and the chairman of its administrative board, who began looking into the financial issues in 2018 after falsified payroll checks were discovered.

Although Krohmer started work at the church years prior to Sholes’ arrival, he acknowledged that no background check had been conducted and her past criminal history had gone unnoticed.

As the internal investigation continued into 2018, more problems eventually came to light, including credit card expenses and unpaid bills that had drawn fees and interest.

“The church took a hit of well over $200,000” across a four-year period, Sholes testified.

“The impact on West End United Methodist Church has been devastating emotionally as well as financially,” Sholes said. “It caused some splits within the church, without any question.”

Krohmer’s defense attorney, Tony Anderson, offered in court that after she was accused of the offenses, she entered into psychiatric care and was diagnosed with bipolar disorder, anxiety disorder and sleep deprivation.

“She began on a course of treatment,” Anderson said, citing her attendance of more than 90 counseling sessions. “She has acted ... with a strong measure of responsibility.”

He also pointed to efforts she has made toward restitution, which he said amounted to 51 separate payments since August 2019.

“I would suggest to the court that given the totality of what she has done in terms of trying to make herself better ... trying to make a consistent payment toward restitution by admitting an acceptance in a very strong way that is genuine, she is entitled to a departure to the low end of the guidelines,” Anderson argued.

Krohmer did not take the stand in her defense, or call character witnesses on her behalf, but prior to her sentencing she read a prepared statement, often through tears.

“I am deeply sorry for the pain and suffering I’ve caused. The consequences of my acts hurt the church,” she said.

“I must first ask for forgiveness for my wrongs, which I’ve done, and apologize to those I’ve hurt, which I’ve done. And will continue to do, not only with my words but with my actions going forward,” she said.

“I promise I will work as much as I can, as hard as I can, to repay the money I took from the church until it’s paid in full,” Krohmer declared.

Photos: From the sentencing of Amy Mauck Krohmer for embezzling nearly $200,000 from a Roanoke churck

A secretary accused of embezzling nearly $200,000 from a southwest Roanoke church used the stolen money, prosecutors say, to cover her monthly…

More details emerged this week about accusations of financial thefts from a Roanoke church.

Churches should 'trust, but verify' to avoid falling victim to scammers

Saved by Grace is just one of a number of churches around the Roanoke Valley that have recently fallen victim to thefts and schemes.

Amy Mauck Krohmer was sentenced to serve four years in prison and pay almost $200,000 in restitution in Roanoke Circuit Court on Wednesday. Krohmer had previously pleaded no contest to embezzlement of her former employer, West End United Methodist Church in Roanoke. She is with her defense attorney Tony Anderson. 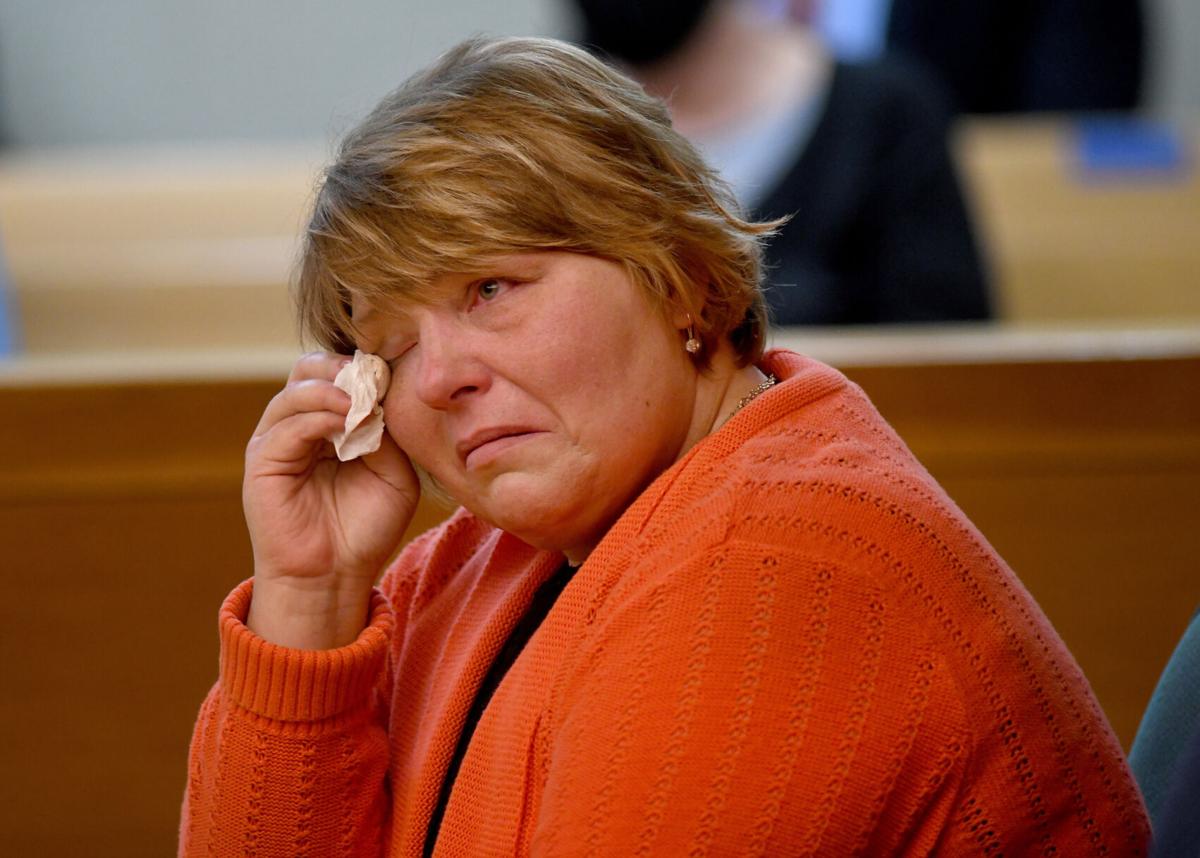 Amy Mauck Krohmer was sentenced to serve four years in prison and pay almost $200,000 in restitution in Roanoke Circuit Court on Wednesday. Krohmer had previously pleaded no contest to embezzlement of her former employer, West End United Methodist Church in Roanoke.