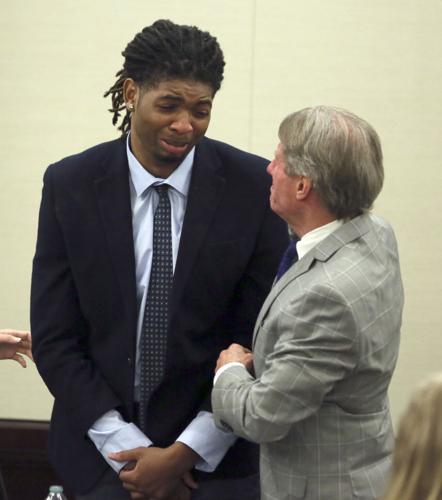 Isimemen David Etute and defense attorney Jimmy Turk hug at the conclusion of the trial in Montgomery County Circuit Court in Christiansburg earlier this year. 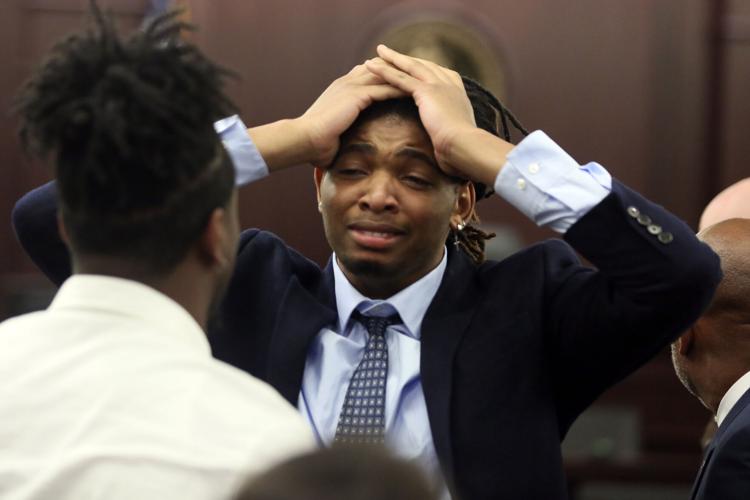 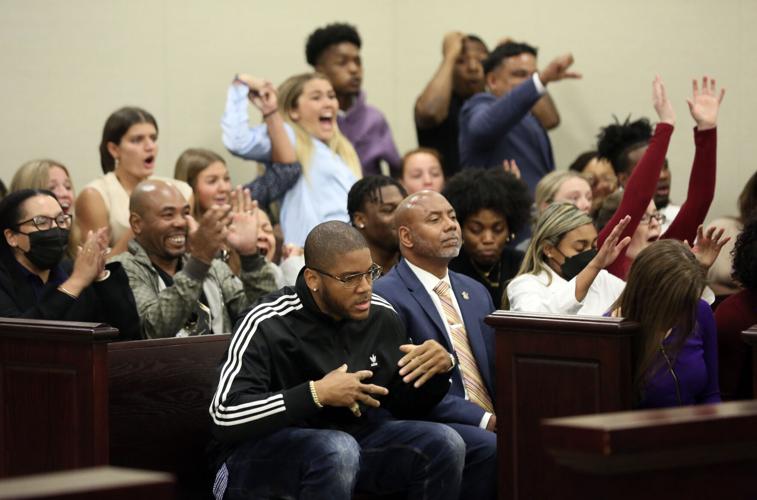 The gallery reacts at the conclusion of Isimemen David Etute trial in Montgomery County Circuit Court in Christiansburg on Friday. 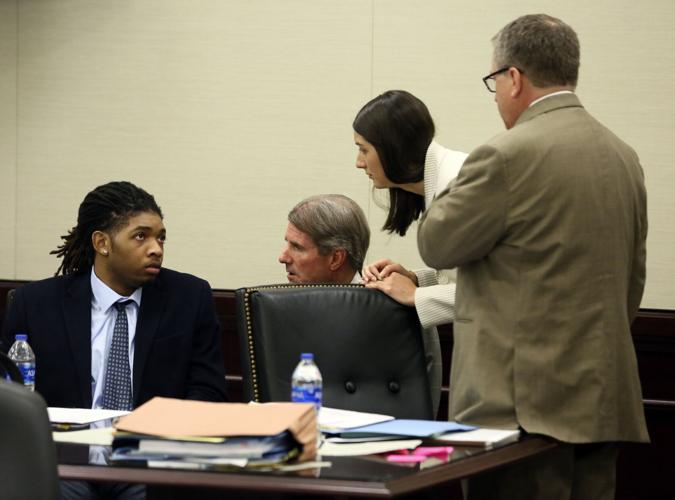 The second-degree murder case drew widespread attention last year because of the unusual circumstances: a college athlete who admitted fatally beating an openly gay man who had posed as a woman on Tinder to initiate a sexual encounter. Etute’s attorneys argued the beating was self-defense in a confrontation between the two in which the man’s true identity was revealed.

When the verdict was read to the courtroom, Etute’s father, David, collapsed in his seat while his wife Nichelle sobbed. Etute lifted his defense attorney Jimmy Turk off the ground in a bear hug with both of them crying. Smith’s family quickly left the room.

Turk spoke to reporters outside the courthouse after watching bailiffs remove the ankle bracelet Etute had been required to wear since being bonded out of jail on June 9.

“This is one of the proudest moments I’ve ever had as a lawyer,” Turk said.

Turk, who has been practicing law for 36 years and tried more than 70 murder cases, nervously paced the hallways while the jury deliberated for more than three hours.

“I’m not in shock because it’s the right verdict, but always wondering and worrying about whether you convinced 12 people,” Turk said. “That’s always nerve-wracking. I’m just thankful for this jury. It is the right decision and right now I’m still just overwhelmed.”

Etute and his parents — who left the courtroom through a back exit — didn’t have a statement to make at this time, according to Turk.

Etute, then an 18-year-old early enrollee at Virginia Tech, fatally beat Smith on May 31 at the Blacksburg restaurant worker’s apartment, according to court testimony.

They connected on Tinder, a dating app, weeks earlier after Smith, who identified as an openly gay man, presenting himself online as a 21-year-old emergency room physician named Angie Renee.

Smith performed oral sex on Etute on April 10, and Etute returned to the apartment with two of his former teammates in May seeking to determine if Smith was a man or woman.

Turk contrasted his client with the victim in stark terms on Friday. He referred to Smith as a “deceitful and dishonest man” who “defrauded young men for his own sexual gratification.”

“Who is the real victim here?” Turk said through tears. “This was a wicked sexual ruse.”

Turk made an impactful 45-minute closing statement and implored the jury to put themselves in Etute’s shoes on the night of May 31.

“Who would be more likely to resort to violence? Who was more likely to be the aggressor? The man who hid the knife or this goofy, gullible kid,” Turk said.

Turk’s family was in attendance for much of the trial, having developed deep ties to the Etute family and Turk's daughter Katie was part of the defense team. Isimemen Etute, a Virginia Beach native, often stayed at Turk’s house when he was in town for court appearances.

Turk’s eldest daughter Lindsey, who had never seen her father argue a case, said the closing argument was the best speech she had ever heard.

“And he spoke at my wedding,” Lindsey Turk said.

Turk spent much of his closing statement arguing Etute, who testified on his own behalf, acted in self-defense after Smith swung at him and reached under his mattress. The police searching Smith’s apartment found a knife hidden between the mattress and box spring in the spot where Etute alleged the attack took place.

“I felt violated,” Etute said, of discovering Smith’s identity. “I was just in shock, in disbelief that someone tricked me and lied to me.”

The jury got to hear Etute’s description of the events twice during the trial with the prosecution also entering into evidence a 45-minute video of Blacksburg police detectives questioning him June 2.

Etute testified in court that Smith reached for what he thought was a gun under the mattress, but didn’t mention that fact when originally questioned in 2021.

Jensen didn’t defend Smith’s conduct in his closing statement, but said the “brutal beating” showed the malice required for a second-degree murder conviction and the defendant’s contradictory statements were enough to cast doubt on the self-defense claim.

“He has a motive for changing what he said,” Jensen said. “Etute has a tremendous amount riding on this trial.”

Jensen did cede a bit of ground in his rebuttal remarks after Turk’s emotional final words.

“If you find this was in the heat of passion, you shouldn’t find him guilty of second degree murder, the crime would be voluntary manslaughter, but what I’m telling you is this was not self-defense,” Jensen said.

The prosecution maintained it was a straightforward case to the jury throughout the trial with crime scene photos — jurors saw multiple photos of Smith’s dead body lying at the foot of his bed including close ups of his bloody face — as well as details from Smith’s autopsy that highlighted what a one-sided assault it was.

“The facts for the most part in this case are not contested,” Jensen said, in his closing statement.

The defense painted a more complex picture of the case while emphasizing the criminal nature of Smith’s conduct.

“Everything he (Smith) did was evil,” Turk said, in his closing statement.

Turk was able to get the lead detective on the case, Ryan Hite, to tell the jury on Thursday during cross-examination that he would have referred Smith’s actions in this case — obtaining sex through false pretenses — to the commonwealth’s attorney had he known about them.

The prosecution relied on expert testimony from the likes of state medical examiner Dr. Amy Tharp and forensic Detective Mike Czernicki to make sure the jury understood the level of damage Etute inflicted.

Tharp testified that most of the bones in Smith’s face were broken, he had bleeding and swelling inside his brain and he had multiple teeth knocked out.

Both experts testified about a “frothy” fluid coming out of Smith’s mouth that ran down his sweatshirt in the crime scene photos.

According to Tharp, the fluid was evidence of Smith inhaling his own blood after the attack. Czernicki testified that Smith coughed up the blood all over the closet door after falling to the ground.

Czernicki also testified to finding impressions of a shoe on Smith’s face that would have required “at least two” blows.

Jensen relied on his cross-examination of Etute to counter the defense’s narrative. Jensen pointed out the differences in his statements and possible moments where he could have simply left Smith’s apartment May 31.

Turk’s hope now is that Etute is able to reclaim his life.

“I can’t imagine being him,” Turk said. “I did prepare him for the worst before today. He knew that worst case scenario he could have been looking at five to 40 years in the penitentiary on a second-degree murder conviction. You can only imagine the feelings of someone they have been found not guilty and no longer have that on their shoulders, how that would feel. He’s going to get his life back, and I’m hopeful.”

Jury instructions in the spotlight on day three

Judge Mike Fleenor sided with the defense on a pair of notable motions during jury instructions.

He excluded a jury instruction on the “gay panic defense” that was the subject of a law passed by the General Assembly last year.

Gay panic refers to claiming, in court, that the reaction to finding out someone else’s sexual orientation or gender identity justifies violent acts. The law states that juries could not consider such reactions as legitimate justification.

Fleenor said the instruction would have applied in this case, but the law wasn’t in place until July 1 and didn’t apply retroactively.

“It would have been applicable, but this (ruling) is purely procedural,” Fleenor said.

Fleenor also allowed the defense’s proposed instructions on self-defense. The prosecution objected on the grounds that a “reach” — the defense alleged that Smith reached under his bed where a knife was later found by police — didn’t constitute the necessary overt act for self-defense.

The judge sidestepped the substance of the arguments since the court was only being asked if the defense met what he described as an “extraordinarily low” standard to allow the jury to consider self-defense.

“There just needs to be a scintilla, and there may be all there is in this case, it’s not that much,” Fleenor said, in siding with the defense.

The 25 points of instruction were read to the jury before closing statements.

The defense rested after calling Jordan Brunson, a former Virginia Tech teammate of Etute, on Friday morning. Brunson accompanied Etute to Smith’s apartment along with Jalen Hampton on May 31.

He testified about waiting outside Smith’s apartment that night and feeling in his “gut” that something wasn’t right.

Defense attorney Turk also asked Brunson about a conversation he had with Etute on June 11, two days after his client was bonded out of jail.

“He took the guy’s hoodie, they looked at each other and the guy reached for him and he swung at him,” Brunson said. “Then he saw him (Smith) reach for something under the bed and hit him five to six times.”

Turk told the jury that the defense was unaware police detectives didn’t disclose finding a knife until June 17.

Day three of the trial opened with the defense trying to call Etute’s older brother Ehis to the stand. The move drew an immediate objection from the prosecution, since Ehis Etute wasn’t among witnesses submitted to the court by the defense during the pre-trial phase.

“This is trial by ambush,” Jensen argued.

Fleenor asked the prosecution to consider if it would take a brief continuance in order to allow Etute’s testimony since excluding a witness’ testimony was an “extraordinary thing to do”, but the defense withdrew the request for him to testify after a brief recess.

Photos: From the trial of Isimemen David Etute, day three

Isimemen "Isi" David Etute is charged with second-degree murder in the death of Jerry Paul Smith, a restaurant worker.

Former Virginia Tech football player Isimemen Etute and his family have issued a statement to The Roanoke Times, Etute was acquitted on second-degree murder charges yesterday

The charges are a footnote to mistaken-gender killing, of which Isimemen David Etute was acquitted.

Isimemen David Etute and defense attorney Jimmy Turk hug at the conclusion of the trial in Montgomery County Circuit Court in Christiansburg earlier this year.

The gallery reacts at the conclusion of Isimemen David Etute trial in Montgomery County Circuit Court in Christiansburg on Friday. 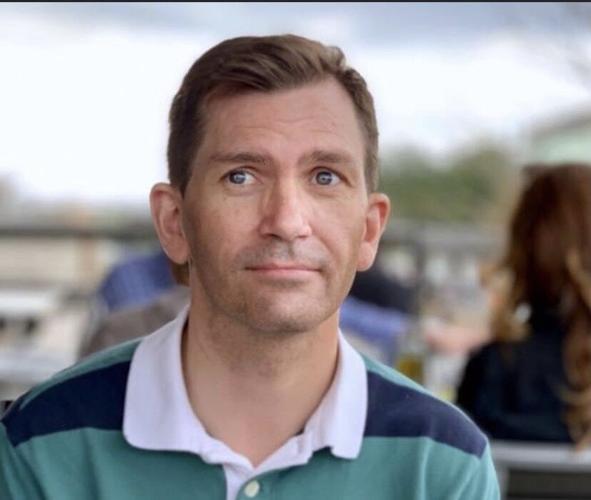