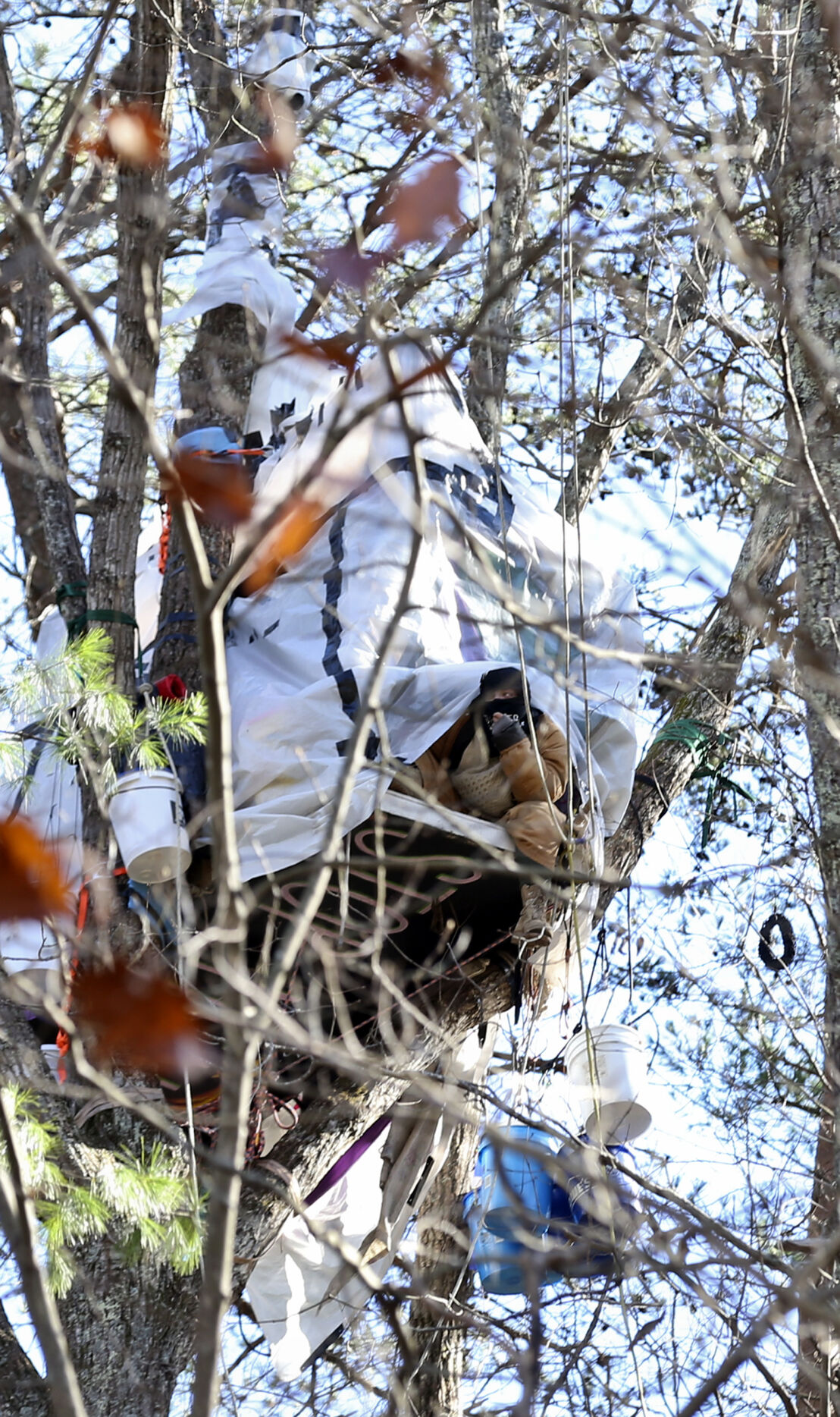 Mountain Valley Pipeline opponent looks out from one of the tree-sits off Yellow Finch Lane in Montgomery County on Monday. 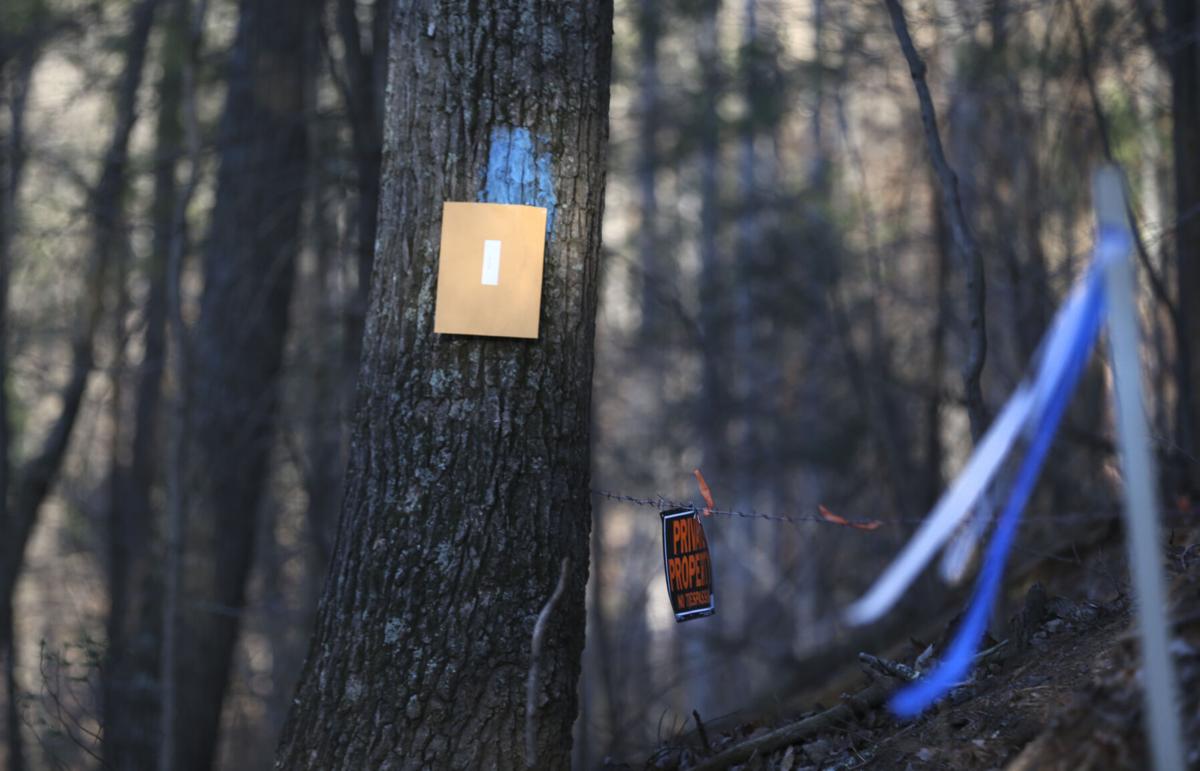 Packets of legal papers were posted on the Yellow Finch tree-sits on Tuesday after the site was visited by three officials. A judge last week issued a temporary injunction ordering the tree-sitters to leave their stands. On Thursday, he found the protesters in contempt of court after they failed to show up for a hearing. 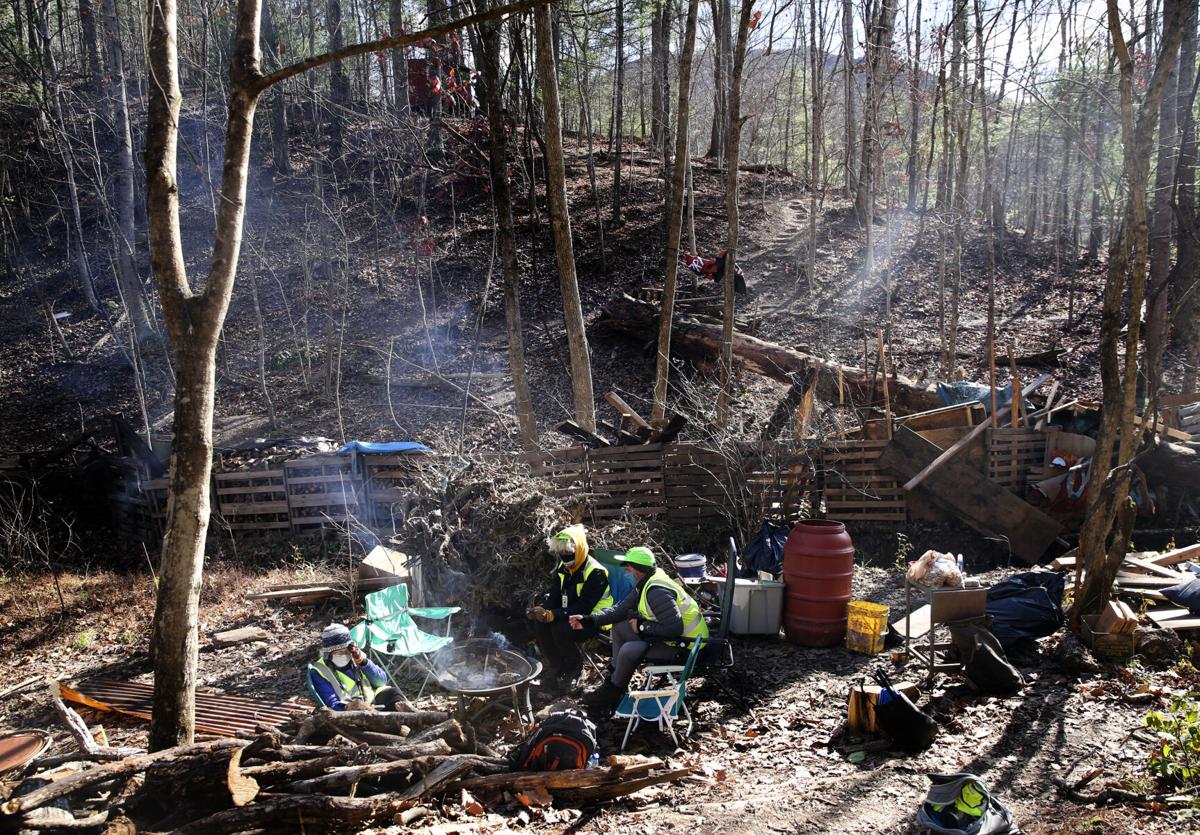 A team of legal observers at the Yellow Finch tree-sits keeps warm around a small fire pit on Tuesday, the second day of the tree-sit watch. 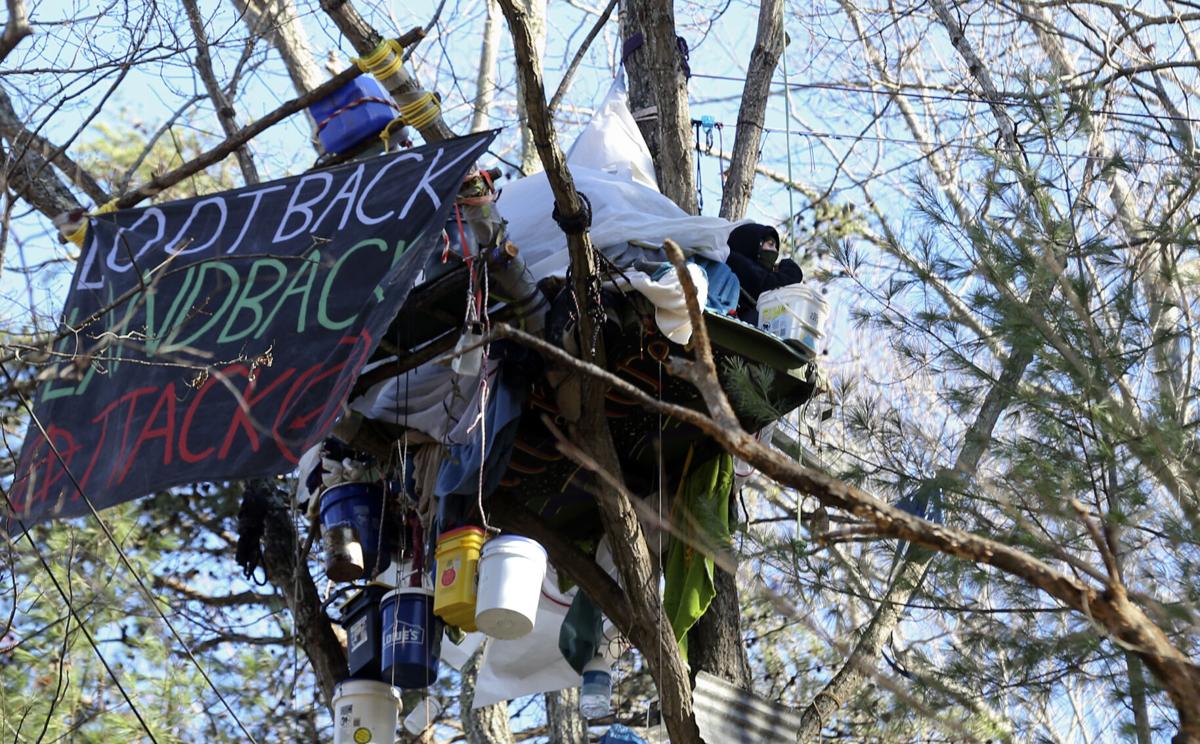 A Mountain Valley Pipeline opponent looks out from one of the tree-sits off Yellow Finch Lane in Montgomery County on Monday. A judge ordered the tree-sitters down last week, but the protestors haven't complied. On Thursday, he found them in contempt of court for not obeying his order.

CHRISTIANSBURG — Two unidentified activists blocking construction of a natural gas pipeline from high in a white pine and a chestnut oak were found in contempt of court Thursday.

Montgomery County Circuit Judge Robert Turk imposed a fine of $500 a day against each tree-sitter for as long as they remain on the tarp-covered wooden platforms that went up more than two years ago.

Officials with the Mountain Valley Pipeline hope the tree-sitters will come down voluntarily to avoid the penalty.

“Because these fines are prospective, Tree-sitter 1 and Tree-sitter 2 may avoid any liability for the fines by immediately vacating the MVP easements,” an order entered by Turk stated.

Last week, Turk issued a temporary injunction ordering three tree-sitters to leave their stands, which are about 50 feet off the ground on a steep wooded slope near Elliston. The tree-sits have prevented Mountain Valley from cutting trees for a small segment of its 303-mile pipeline.

One of the tree stands is currently unoccupied, according to testimony Thursday during a court hearing that was not attended by the tree-sitters or anyone associated with them.

Turk noted that under the injunction, the protesters remain subject to removal by sheriff’s deputies. The order does not say when, or if, that may happen.

“It was our hope that the tree-sitters would choose to leave on their own to avoid unnecessary confrontations,” Montgomery County Sheriff Hank Partin said in a statement released after the hearing. “However, we will ensure the court order is enforced in due time.”

Partin said the office is making plans “to ensure we have all the necessary resources available, so the situation can be resolved quickly and in a safe manner for all the parties involved.”

In the past, authorities have used a mechanized lift to reach and remove protesters who chained themselves to excavators and other high perches in the pipeline’s right of way. That could be complicated by the steep terrain on which the tree-sits are located off Yellow Finch Lane.

After Turk issued his order Thursday, it was read aloud by sheriff’s deputies who stood at the base of the two occupied trees. A short time later, there had been no response from above.

The protesters are not likely to surrender, one of them indicated in a message posted to the Facebook page of Appalachians Against Pipelines, a group that has chronicled the tree-sits since they went up Sept. 5, 2018.

A person identified only as “Acre” wrote that sheriff’s deputies showed up Monday, which the injunction set as the last day they could occupy the stands without being found in contempt.

“Cops came, took a good look at us, scratched their heads and left,” the post read. “Rinse and repeat a couple of times. Maybe they thought an injunction was enough to scare us away. If so, they were wrong.”

The tree-sit is the longest continuing blockade of a natural gas pipeline on the East Coast, according to Appalachians Against Pipelines. Tree-sitters and other pipeline opponents say the project is scarring scenic mountains, clogging streams with sediment and contributing to climate change.

Mountain Valley says that it has a legal right to the land — which it acquired through the process of eminent domain — and that the tree-sitters are delaying a project that will provide needed natural gas to markets in the Mid-Atlantic and Southeastern regions of the country.

Earlier in the week, the joint venture of five energy companies cleared a major hurdle that had threatened to again delay construction of the $6 billion project.

The 4th U.S. Circuit Court of Appeals turned down a request from environmental groups to stay a biological opinion from the U.S. Fish and Wildlife Service, which found in September that construction would not jeopardize endangered species in the path of the pipeline.

That allowed construction to move forward on a large part of the project. Mountain Valley is still barred from crossing most streams and wetlands and passing through the Jefferson National Forest, pending further review.

In a filing Thursday, the company asked the Federal Energy Regulatory Commission to allow it to bore under streams and wetlands along the first 77 miles of the pipeline in West Virginia. When FERC approved the pipeline three years ago, it authorized Mountain Valley to temporarily dam streams, dig trenches along the bottom, bury the pipeline and then restore the water flow.

Boring completely under the water bodies is not covered by permits from the U.S. Army Corps of Engineers, which the 4th Circuit stayed Oct. 16 at the request of the Sierra Club and other environmental groups.

Should FERC approve the request, Mountain Valley would be able to complete the first 77 miles of the pipeline, up to the point where it connects to another pipeline.

That in turn would allow the first portion of the pipeline to be placed in service while construction of the remaining 226 miles is completed later, according to the lengthy application.

Mountain Valley asked for an expedited ruling from FERC by Dec. 31. If approved, the change in stream-crossing methods would allow the first segment of the pipeline to be completed by spring.

After repeated delays and cost overruns, Mountain Valley now says it expects the entire project to be transporting natural gas by the second half of 2021.

The tree-sit blockade of the piepline's route in Montgomery County continues, more than two years after it began.

One of two Mountain Valley Pipeline protesters was removed from a treetop blockade Tuesday by the long arm of the law, which was made even longer with help from a towering construction crane.

The operation marks the end of a tree-sit protest that began about two and a half years ago, blocking Mountain Valley from cutting some of the last remaining trees along the natural gas pipeline’s path.

Photos: Tree-sitters persist in protest of the Mountain Valley Pipeline

As the sun set Monday on the Yellow Finch tree-sits near Elliston, the aerial blockade of the Mountain Valley Pipeline remained. A judge order…

Judge orders tree-sitters down after more than 2 years

A temporary injunction issued Thursday by Montgomery County Circuit Court Judge Robert Turk ordered the three unidentified tree-sitters and 10 of their supporters to be gone by Monday.

Up in the trees and on the ground, opposition to Mountain Valley Pipeline continues

A judge has delaying a hearing on Mountain Valley's attempt to remove three tree sitters, while opponents object to continued work on the controversial pipeline.

A woman who was said to be up a tree has been dropped from Mountain Valley Pipeline’s legal attempt to have a group of protesters removed.

Mountain Valley Pipeline opponent looks out from one of the tree-sits off Yellow Finch Lane in Montgomery County on Monday.

Packets of legal papers were posted on the Yellow Finch tree-sits on Tuesday after the site was visited by three officials. A judge last week issued a temporary injunction ordering the tree-sitters to leave their stands. On Thursday, he found the protesters in contempt of court after they failed to show up for a hearing.

A team of legal observers at the Yellow Finch tree-sits keeps warm around a small fire pit on Tuesday, the second day of the tree-sit watch.

A Mountain Valley Pipeline opponent looks out from one of the tree-sits off Yellow Finch Lane in Montgomery County on Monday. A judge ordered the tree-sitters down last week, but the protestors haven't complied. On Thursday, he found them in contempt of court for not obeying his order.