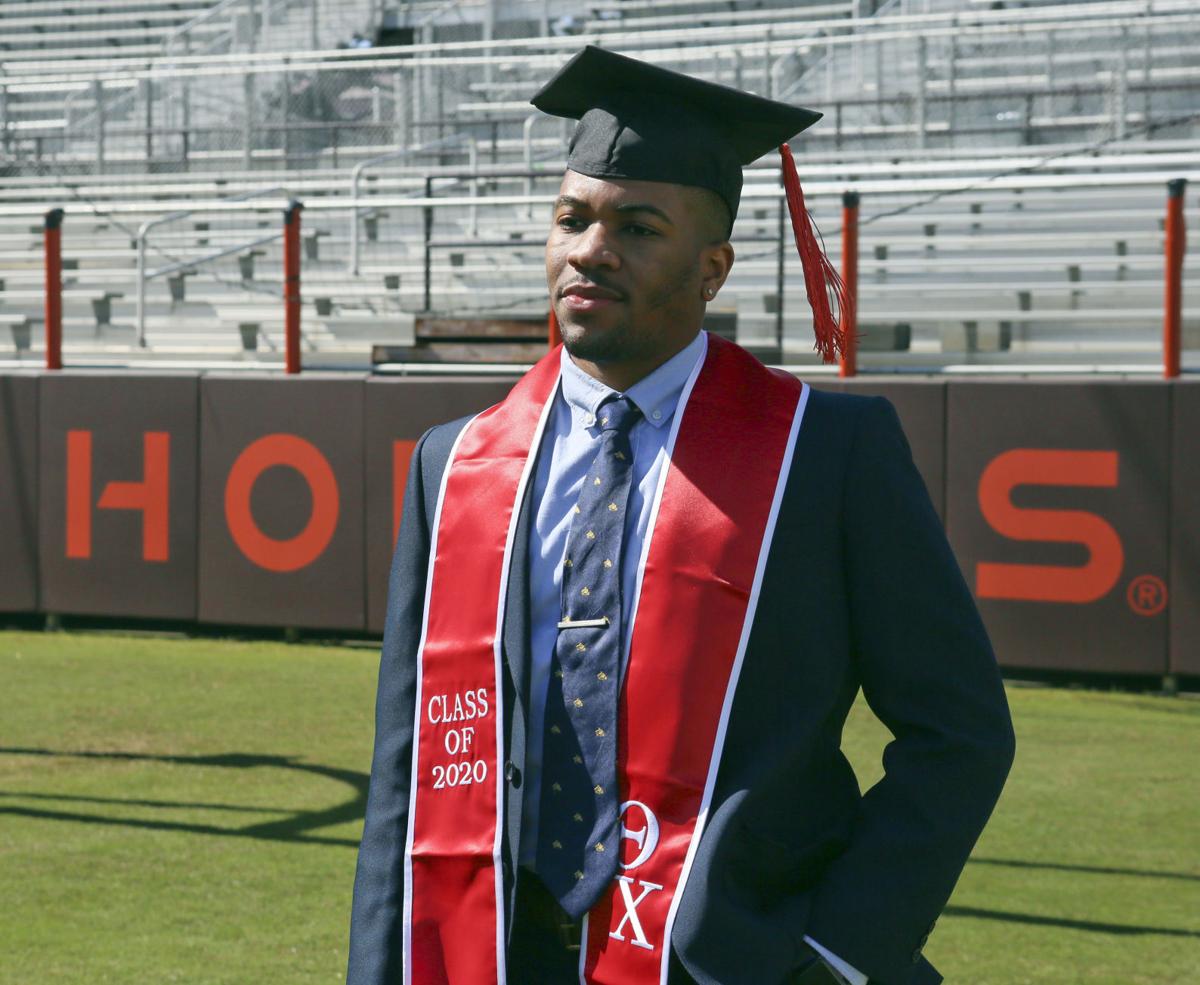 Virginia Tech 2020 graduate Alexander Nwogu, photographed in Lane Stadium on May 5, 2020, studied industrial system engineering and was in the Theta Chi fraternity. 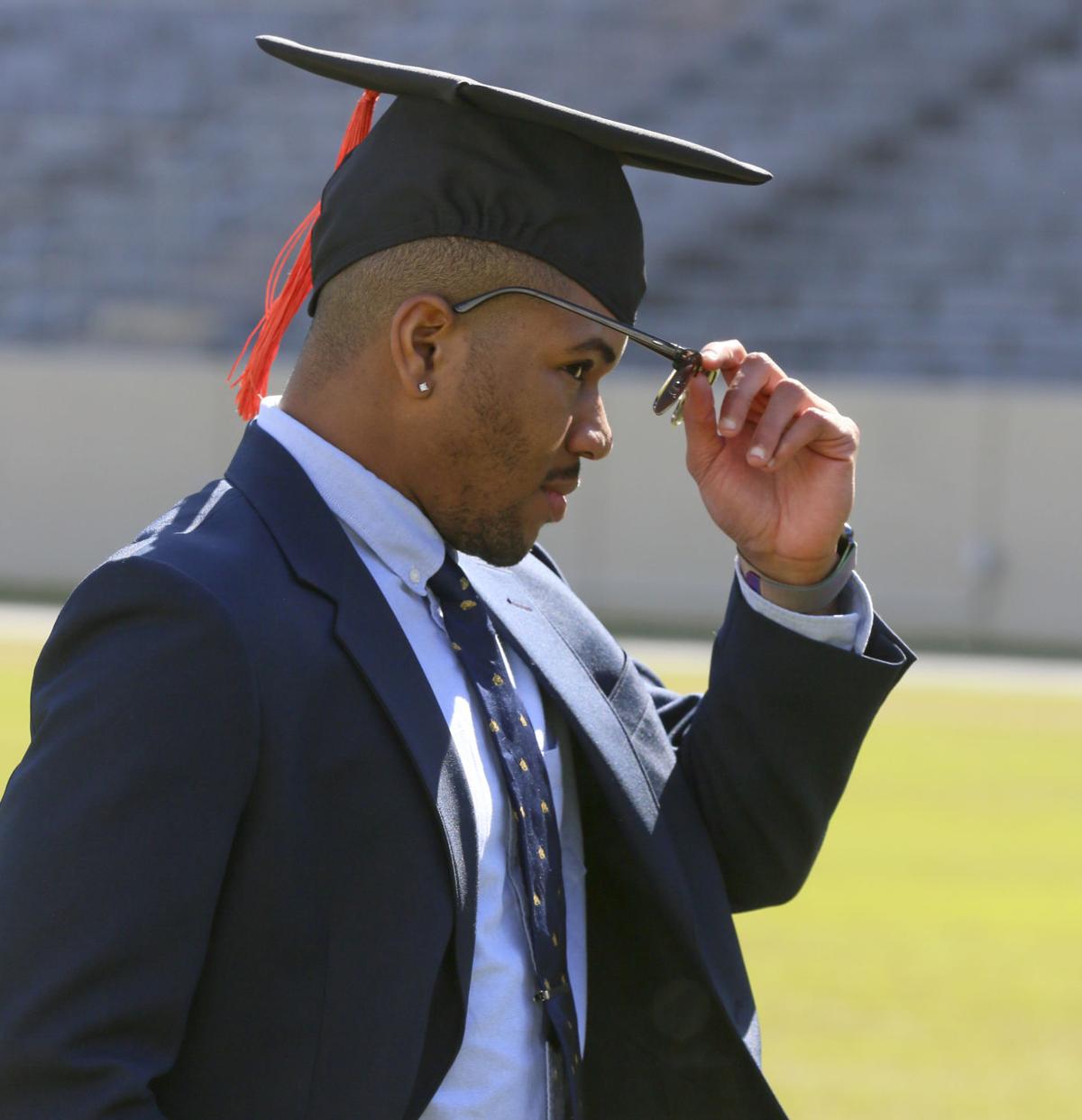 Virginia Tech class of 2020 graduate Alexander Nwogu in Lane Stadium on May 5, 2020. 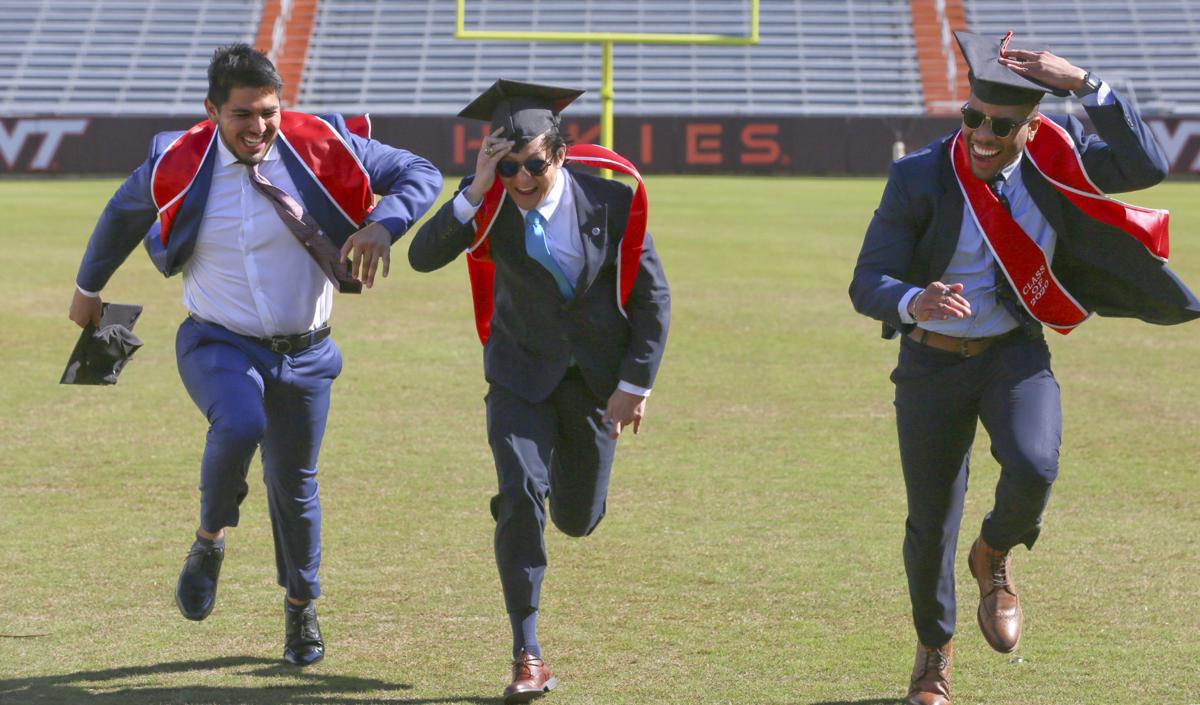 Virginia Tech class of 2020 members Will Ventura (from left), Chris Batto and Alexander Nwogu race toward a graduation photo finish line in Lane Stadium in May. The Theta Chi fraternity brothers became close friends despite diverging into different majors.

A recent Virginia Tech graduate who in May said he had taken a consulting job at Ernst & Young in Northern Virginia was fatally shot at a gas station in Washington, D.C., police said.

Alexander Nwogu, 23, of Blacksburg, was found dead about 1:30 a.m. Monday in the 4900 block of Connecticut Avenue Northwest, according to the Metropolitan Police Department.

Officers arrived at the scene after reports of gunfire. D.C. Fire and Emergency Medical Services found Nwogu with a gunshot wound and determined he was dead, the police department said.

The shooting happened at a Shell gas station that is open 24/7, according to media reports.

Asked for further details — including about media coverage that said police believed Nwogu was a customer at the time — Alaina Gertz, a police spokswoman, said in an email that the department had no additional information to share.

Nwogu graduated with a bachelor’s in industrial and systems engineering from Tech in May, the university said.

“It is a tragic loss of a very promising life,” said Charlie Klauer, an associate professor who advised Nwogu on his senior project in the department of industrial and systems engineering. “I would say that he was a perfect blend of studiousness, seriousness and fun. He knew what he wanted and he was going to go after it and he had direction, for sure. But he also was lighthearted and could be very funny.”

After the coronavirus pandemic derailed the ability to run experiments, Nwogu and his teammates were “resilient and resourceful” in adapting the project, she recalled. Klauer is continuing to use their work for the U.S. Navy — which assessed fatigue and high workload on military personnel — with a new senior design team.

“All their good work is still being used and moving forward,” Klauer said. She offered her deepest condolences to his family.

“I would like them to know he had a good family here, and we are all heart-broken,” Klauer said.

In a May article about Tech’s online-only commencement, Nwogu told The Roanoke Times that his father, an army officer in Nigeria, had been forced to cancel his flight because of the coronavirus pandemic.

“Having him come and see me walk across the stage would have been closure,” Nwogu said about the trials he had gone through to achieve a college education. “To lose that experience is heartbreaking, but, to look at the big picture, there are a lot of people losing their lives, losing their jobs.”

Nwogu recounted — during part of the interview not published in the May story — that his mother died when he was a child. He attended high school in Nigeria until his junior year, when his father got an opportunity to get a doctorate in counterterrorism in the U.S.

Nwogu finished his senior year in high school in Northern Virginia, and started studies at Virginia Commonwealth University in Richmond, where his sister lived at the time.

He was a member of Theta Chi at Tech and played basketball and soccer recreationally, Nwogu said in May. He was also an undergraduate research assistant. In May, he was planning to move to Alexandria, where his sister lived, and begin apartment searching. He has a younger brother studying at the University of Michigan.

He credited his father for putting three kids through college on an army officer’s salary.

Anyone with information about the homicide is asked to call the Metropolitan Police Department at 202-727-9099. Tips can also be sent via text to 50411.

A judge said in a preliminary ruling that a malicious prosecution lawsuit against a Pulaski County sheriff's investigator can go forward.

The victim in a fatal weekend shooting has been identified as a 41-year-old Roanoke man, according to the Roanoke Police Department.

After more than two years of avoiding the courtroom, a former NASCAR Xfinity driver and his state lawmaker attorney appeared before a Smyth County Circuit Court judge on Wednesday for a plea hearing in a domestic assault case against him.

Driver charged with shooting at another vehicle on I-581/U.S.220 corridor in Roanoke

A Roanoke driver has been arrested and charged with shooting at another driver after the two came close to colliding on the Interstate 581/U.S. 220 corridor.

Authorities are searching for two suspects in a pair of convenience store burglaries that happened in early Monday, according to the Franklin …

Three people, including two police officers, were injured Friday night when a SUV struck a parked police car, according to the Roanoke Police …

Churches should 'trust, but verify' to avoid falling victim to scammers

Saved by Grace is just one of a number of churches around the Roanoke Valley that have recently fallen victim to thefts and schemes.

Roanoke police are not yet identifying a man found dead early Saturday morning or releasing details of the incident.

Virginia Tech 2020 graduate Alexander Nwogu, photographed in Lane Stadium on May 5, 2020, studied industrial system engineering and was in the Theta Chi fraternity.

Virginia Tech class of 2020 graduate Alexander Nwogu in Lane Stadium on May 5, 2020.

Virginia Tech class of 2020 members Will Ventura (from left), Chris Batto and Alexander Nwogu race toward a graduation photo finish line in Lane Stadium in May. The Theta Chi fraternity brothers became close friends despite diverging into different majors.