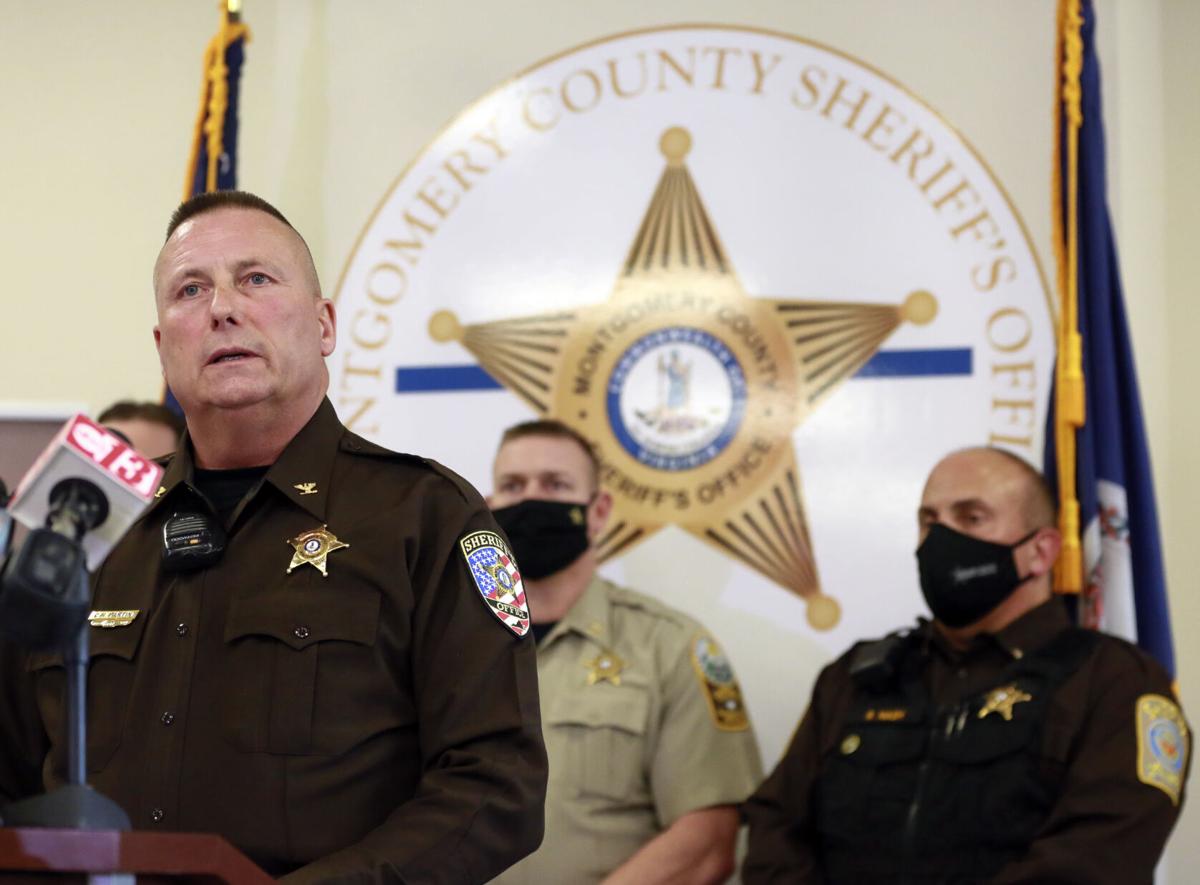 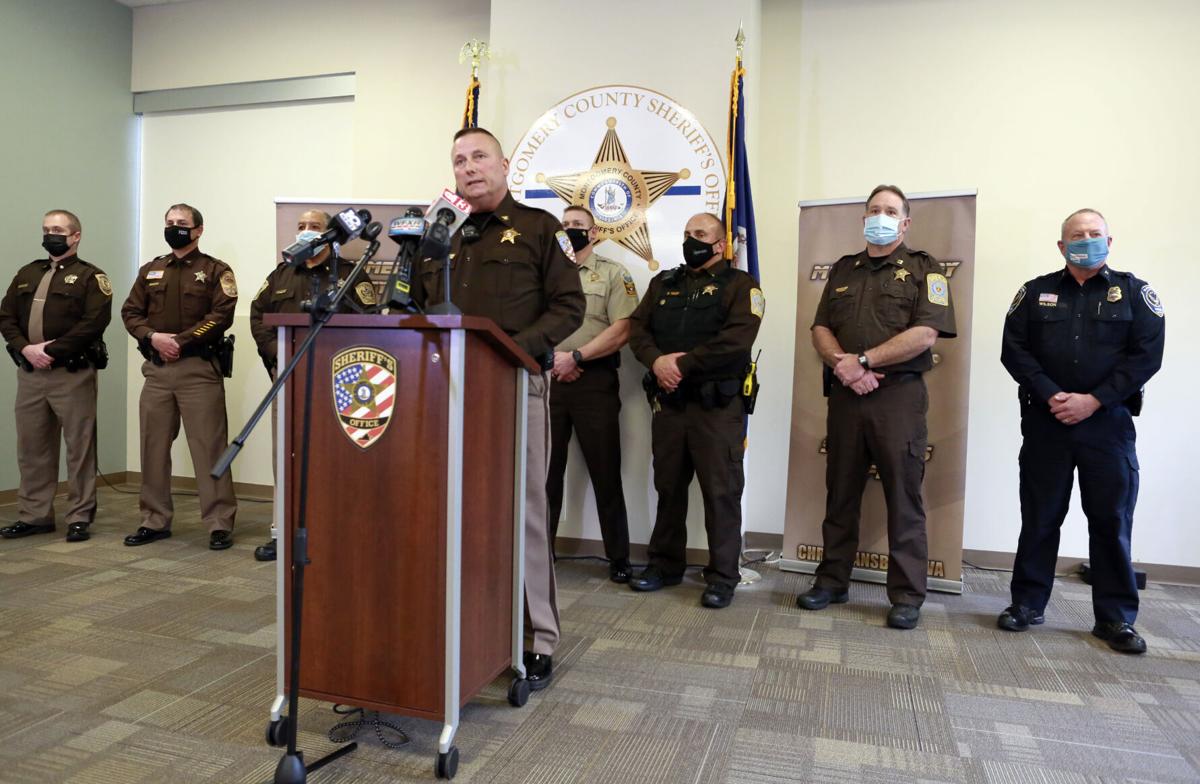 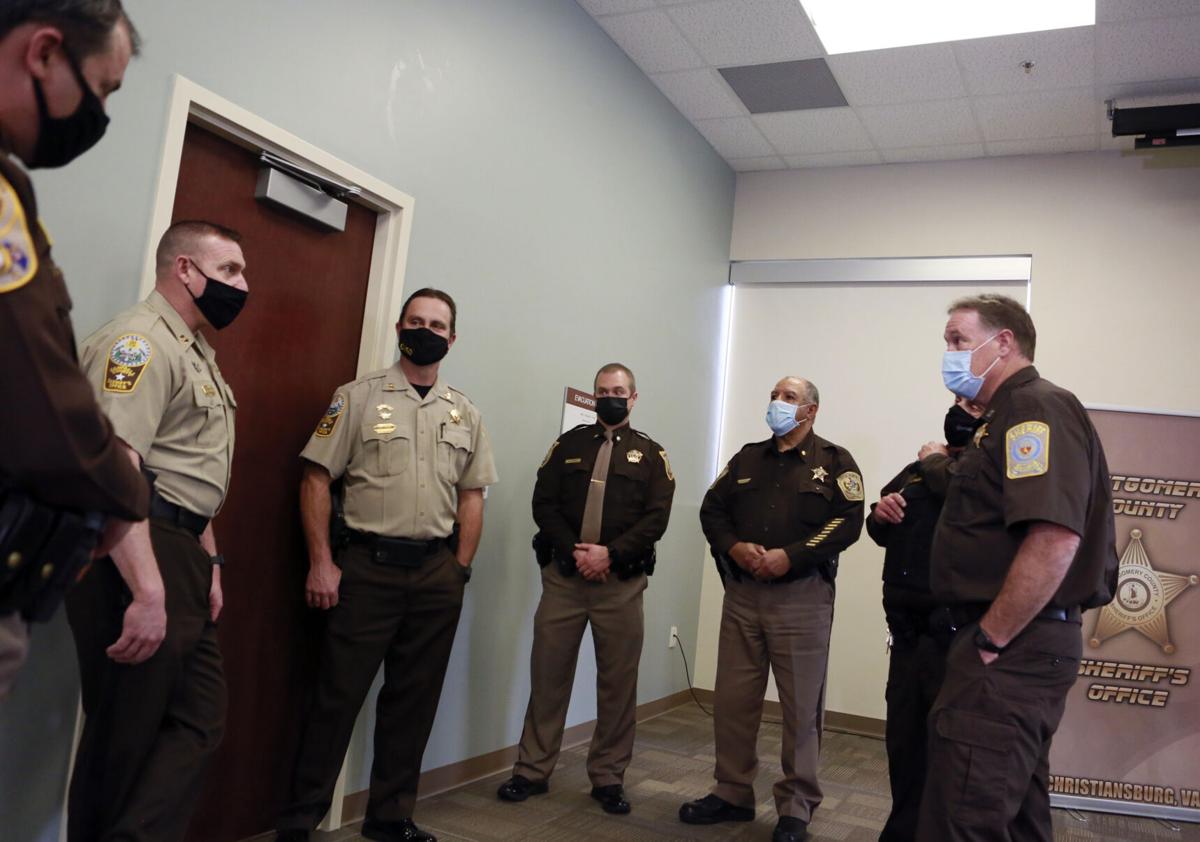 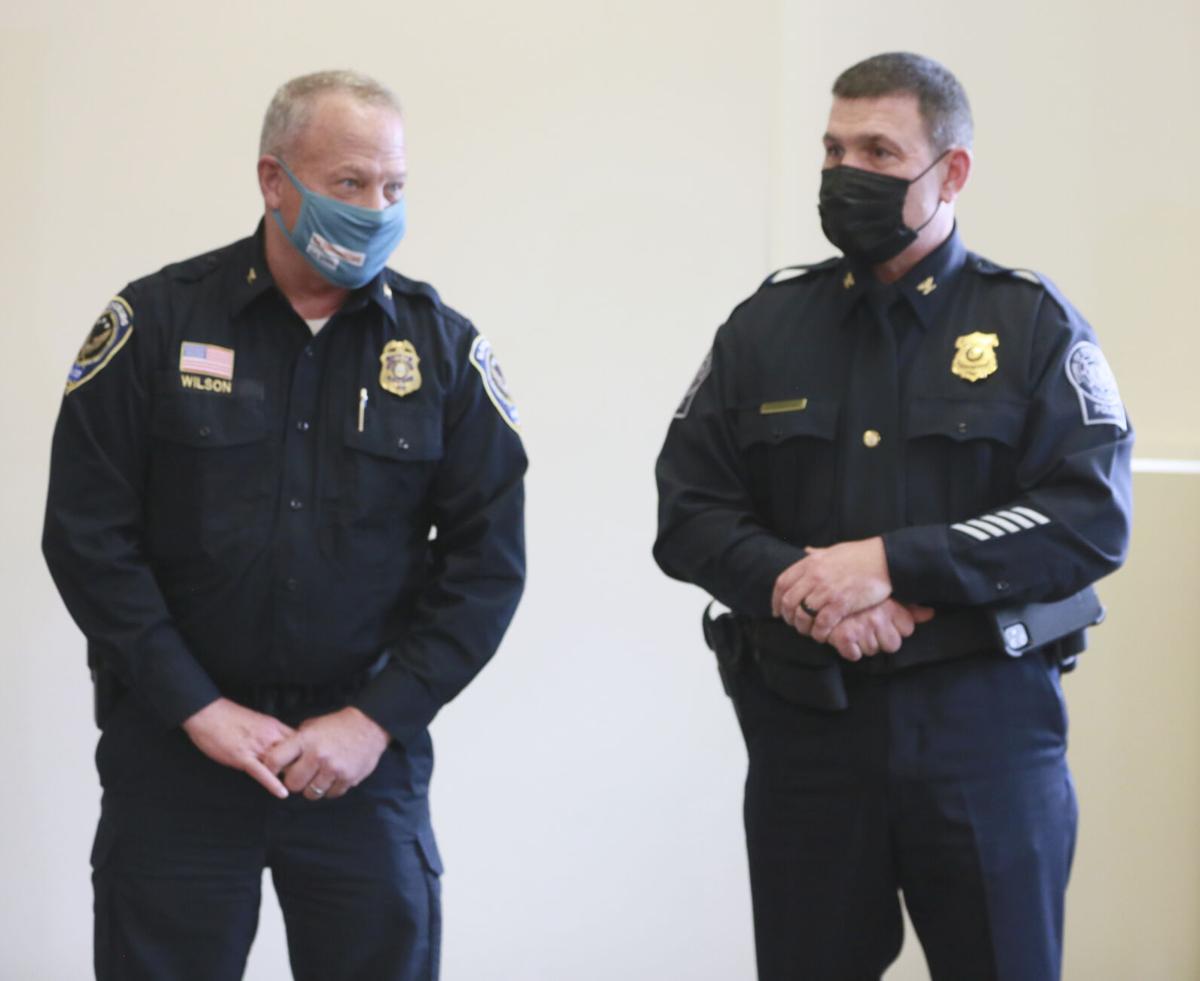 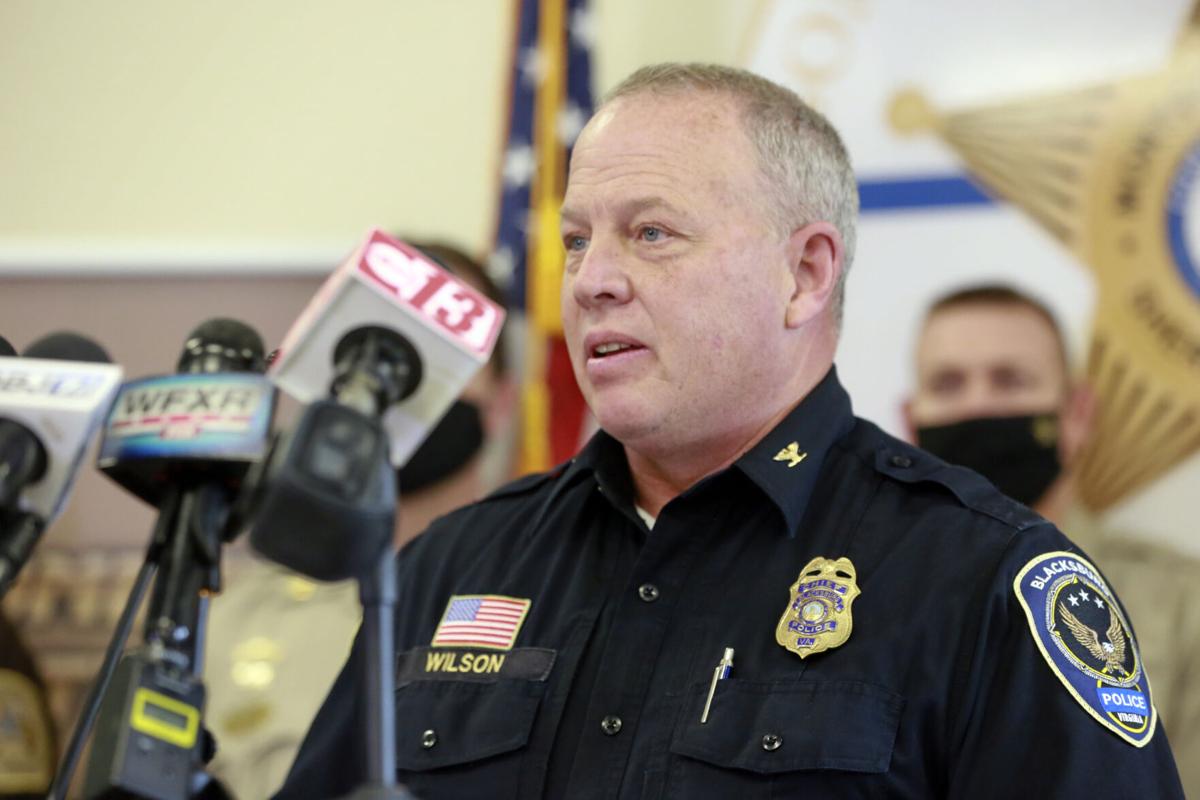 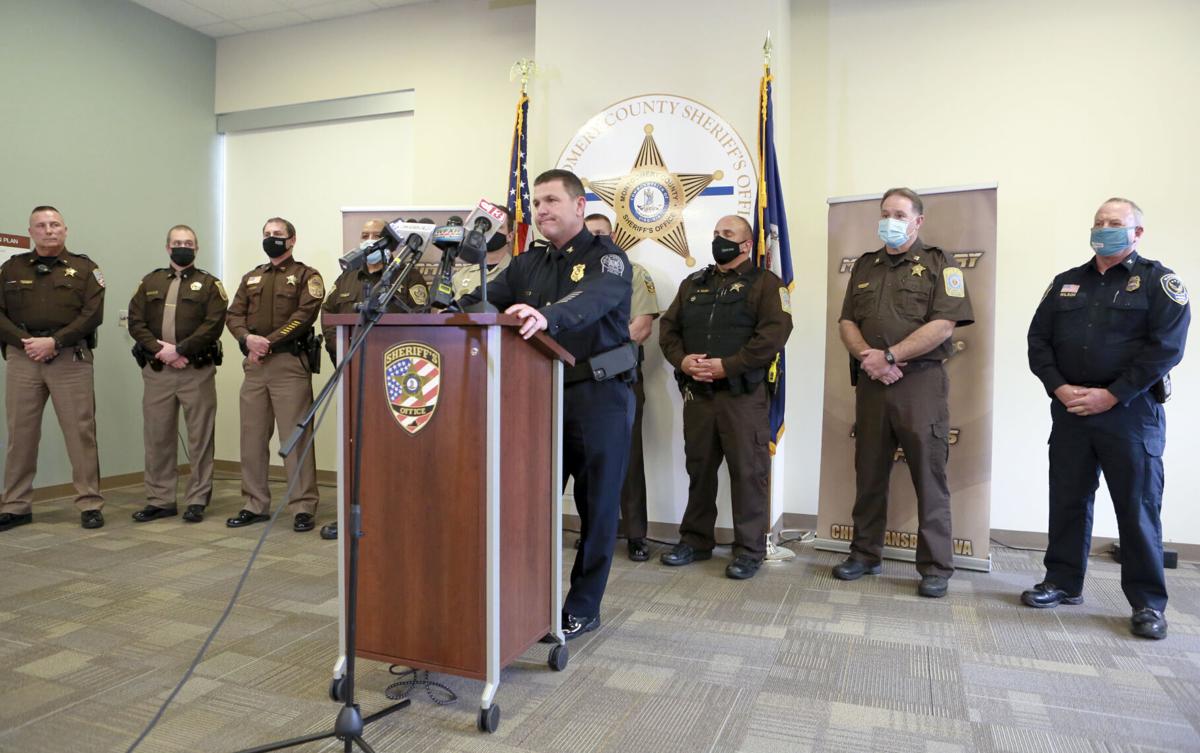 CHRISTIANSBURG — Montgomery County Sheriff Hank Partin was joined by five other sheriffs and the police chiefs of Christiansburg and Blacksburg Wednesday as he laid into the Virginia Department of Behavioral Health and Developmental Services for what he termed a “systemic failure” in admissions to state mental health hospitals.

“The folks that are in crisis, that need help – they aren’t receiving help,” Partin said at a news conference called at the county Public Safety Building.

Specifically, Partin and his fellow law-enforcement leaders took the state to task for delays in admitting people held on Temporary Detention Orders, which are issued when someone is found to be a danger to themselves or other.

The magistrate-issued order tells officers to transport the person to state mental facilities like the Southwestern Virginia Mental Health Institute in Marion. Too often, Partin said, officers may have to drive across the commonwealth to find a bed. Frequently, they find the state facility is at capacity and will not admit the person. Then the person having the mental health crisis waits in an emergency room, under an officer’s guard, until the mental health facility has a bed available, Partin said.

This can sometimes take more than a day, and wait times have only grown longer during the year of the pandemic, especially with the state facilities declining to admit anyone who tests positive for COVID-19, Partin said.

“For the department … to take the position that people simply can’t have a mental health crisis during COVID is disturbing, but not surprising,” Partin said.

Partin was joined Wednesday by Montgomery County’s two police chiefs, as well as the sheriffs of Roanoke County and the counties of Floyd, Bedford, Amherst and Campbell.

Partin called on the state behavioral health department and the General Assembly to “stop passing the buck and step up to develop and implement solutions to address the constant bed shortages and other deficiencies in the state response to mental health crises.”

Partin, a Republican, said he had reached out to the legislature by describing the problem two years ago to “the delegate,” but “didn’t hear jack” in reply. Parts of Montgomery County are represented in the House of Delegates by both Chris Hurst, a Democrat, and Nick Rush, a Republican who this month said he is leaving the General Assembly at the end of the year.

Hurst responded to Partin’s comments Wednesday with a lengthy emailed statement saying he had sought solutions to problems of mental health admissions and capacity since before being elected in 2017.

“I wish this was a case where we could wave a magic wand and everything is solved,” Hurst wrote. “But when you restrict someone’s civil liberties through a commitment order, someone must be responsible while that person is in state custody. We have made significant attempts to reduce the demand for crisis care but our efforts to meaningfully address mental healthcare have only recently begun in earnest with the new majority. Bed space, finding a bed and transporting the patient to that facility remains a problem but to categorically blame the General Assembly or one specific legislator is imprecise and divides us at a time when collaboration is key. “

Among the measures that Hurst pointed to are the state’s seeking proposals to upgrade its bed registry, so that law enforcement and other agencies will have a more real-time list of available spots in mental health facilities.

Meghan McGuire, chief public relations officer for the Virginia Department of Behavioral Health and Developmental Services, also emailed a statement responding to Partin. She said that the department realizes the situation is “incredibly difficult” for law enforcement and appreciates officers’ work. McGuire wrote that state facilities are often operating at 100 percent capacity, that the pandemic has added many complications, and that the state is working on ways to prevent mental health crises and to streamline safe discharges in ways that would open more state hospital beds.

“The critical reality is the state hospitals will remain in this cycle until Virginia implements more comprehensive payment strategies and rules for admissions to private hospitals and strengthens community services that facilitate discharges,” McGuire wrote.

Hurst and McGuire pointed to the alternative transport program that Virginia launched in recent years, with the New River Valley being one of the first localities to gain the service. The alternative part of the system is that a private company, rather than law enforcement officers, takes some subjects of Temporary Detention Orders to state facilities. Hurst said that the new system could handle up to half of mental health transports.

But with many requirements including that the person not have a history of violence or medical issues, the alternative transport program has not helped Montgomery County much, Capt. Kris Weaver of the sheriff’s office said after the news conference. Weaver said he did not have exact numbers but thought very few alternative transports had been done in the county.

Christiansburg police Chief Mark Sisson and Blacksburg Chief Anthony Wilson estimated that about five times per week, they or Partin, or their senior officers, had to get personally involved in bringing state hospital doctors, private hospital emergency room physicians, and others together to work out a mental health admission – to “arbitrate a truce of some kind,” Wilson said.

As for officers’ lengthening waits with would-be mental health patients, Sisson, Wilson and Partin said it was the wrong task to assign to their agencies.

“We can’t sit with them,” Sisson said. “We’re not clinical psychologists.”

FLOYD — Floyd County’s first criminal jury trial after a one-and-a-half-year pandemic layoff of such hearings brought a quick verdict Tuesday by eight women and four men who took less than 15 minutes to convict Ricky Lee Reed of Indian Valley for possession of firearms by a violent felon.

A bystander was hurt Saturday night when gunfire broke out near a store in northwest Roanoke.

A suspect in property crimes attempted to flee from a Roanoke officer and then injured the officer and a K-9 during a struggle, according to police.