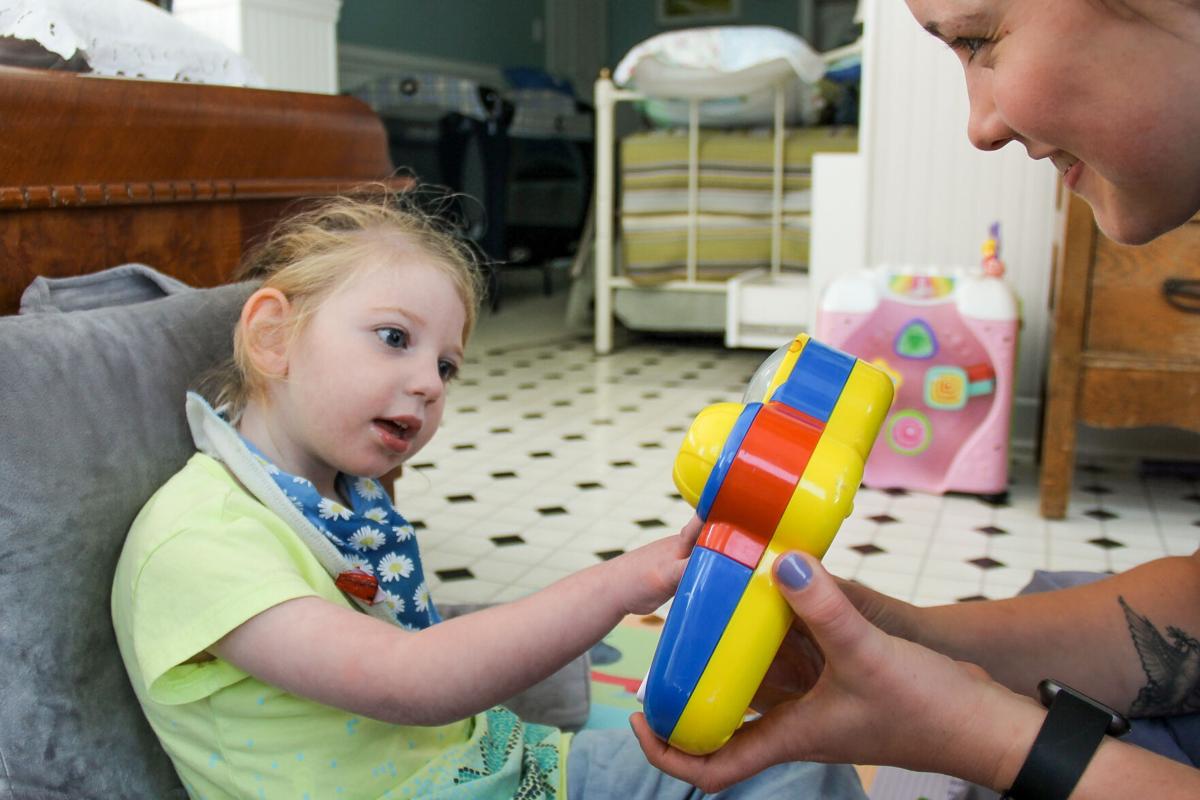 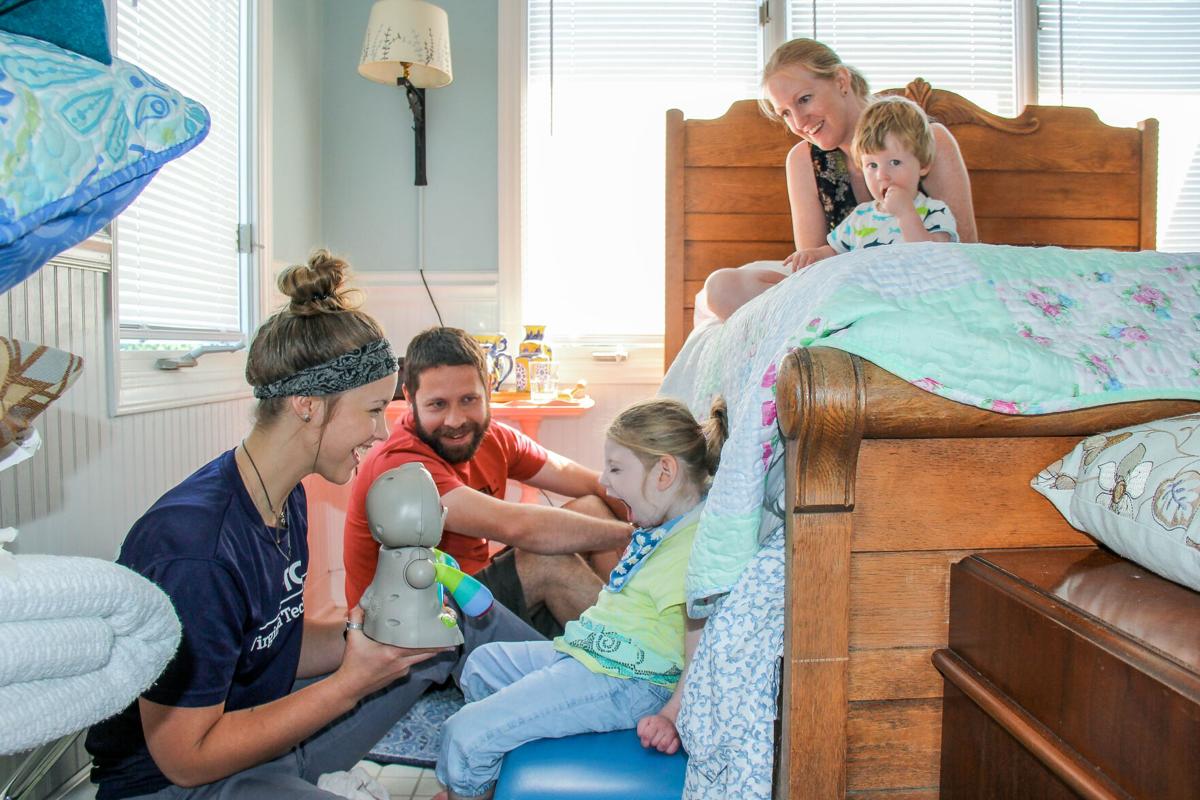 Sarah Hattersley is introduced to a toy robot presented by Megan Price, an occupational therapist at Virginia Tech. Enjoying the moment are Sarah’s father, Craig Hattersley, while mother Laura Hattersley and the couple’s son, Felix, watch. 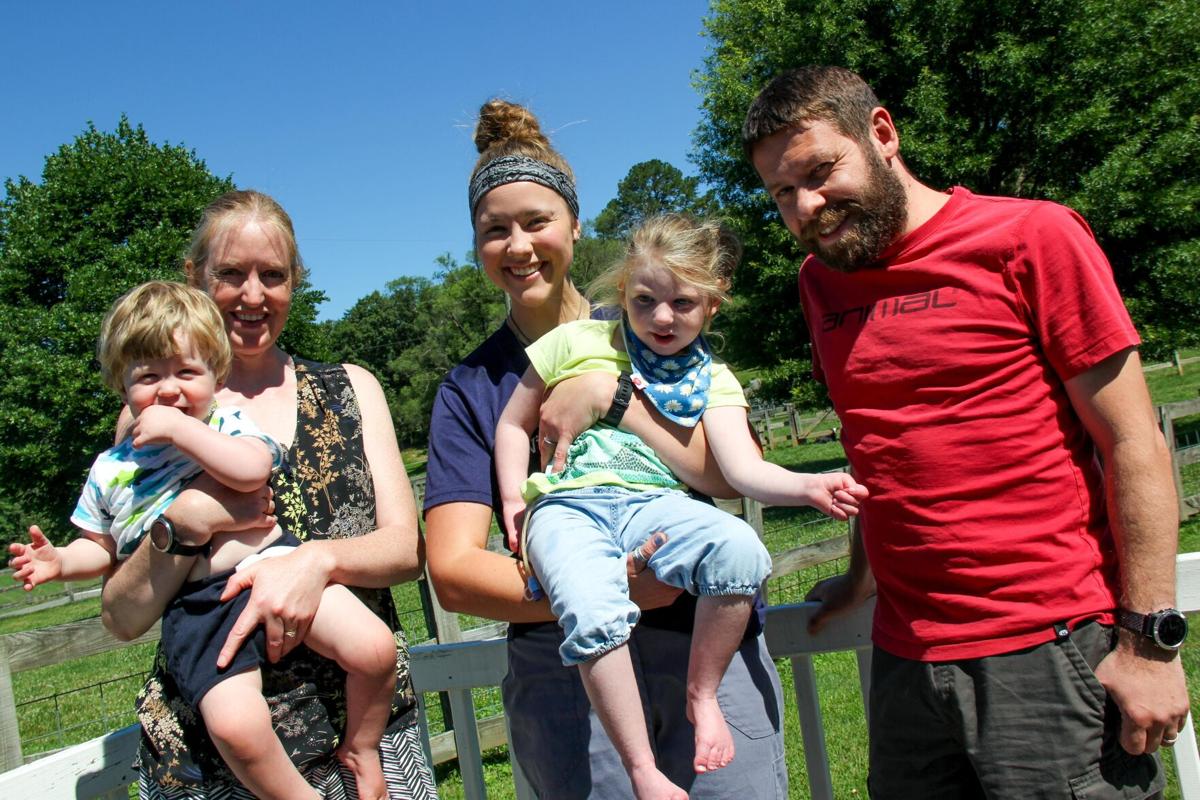 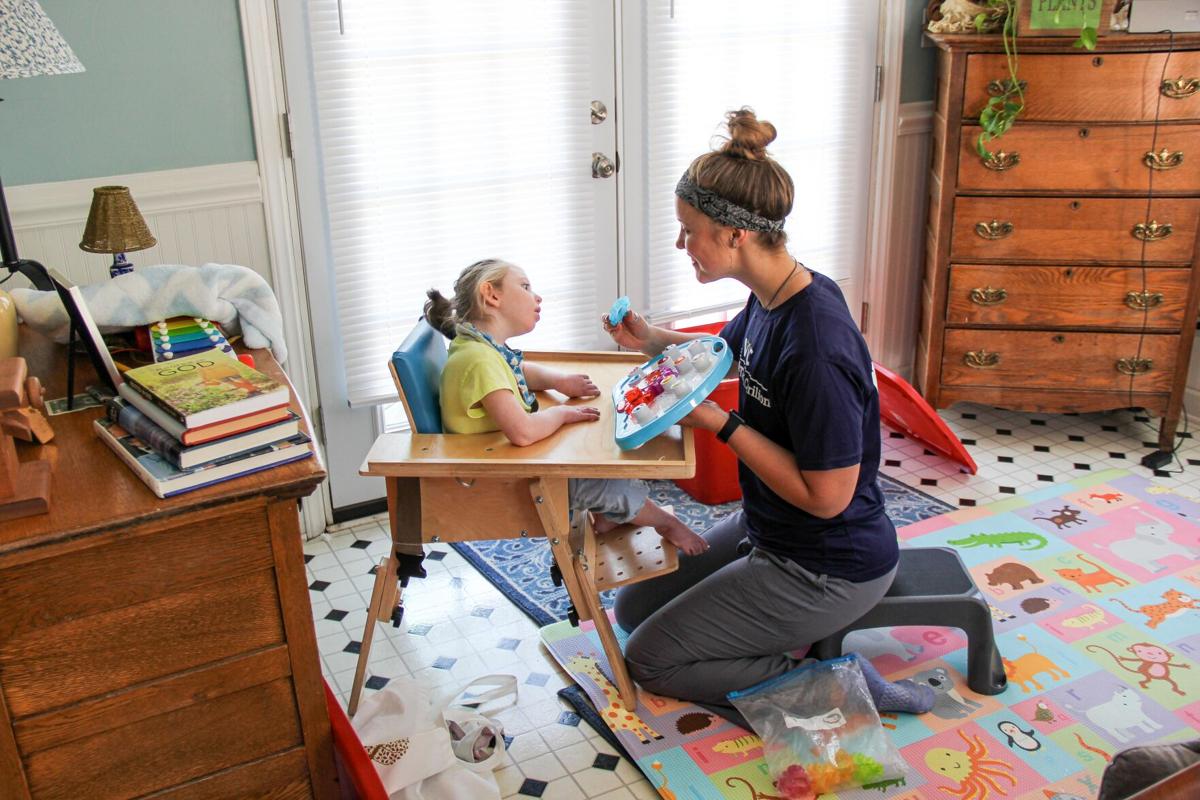 Sarah Hattersley recently received a treatment at the Fralin Biomedical Research Institute at VTC that her parents worked hard for her to get.

As they boarded a plane headed home across the Atlantic Ocean for Britain, mother Laura Hattersley, husband Craig and one-year-old Felix have gone to great lengths — with help from their family, friends and strangers — to get 3-year-old Sarah in front of specialists for her very rare genetic condition.

“Maybe about 70 people in the world have got it,” Hattersley said of her daughter’s CASK gene mutation, resulting in epilepsy and other developmental delays. “A while ago, we found out that here in Roanoke at the Fralin Institute… they’ve seen three children before with Sarah’s condition.”

Compared to the few hours of therapy per week available for Sarah Hattersley in the UK, a trip across the pond seemed worth a shot, and so a plan formulated.

It takes a village

With the cost of Sarah’s health care being prohibitively expensive, in September 2019, the Hattersleys started fundraising. The goal was about 30,000 pounds — or $41,500 — and by the time the pandemic took hold in March, almost all of it was raised.

“We’d given ourselves a year, but actually it only took about five, six weeks to do,” said Hattersley, a former biology teacher who forewent a career to care for her daughter. “Raising the money took the whole community… family, friends, everybody helping, and they made it actually really easy for us.”

Students at Hattersley’s former school pitched a pound or two each to not wear their uniforms for a day; her husband with a friend ran 44 miles through the mountains of Wales; her sister put on bingo nights; they sold old clothes and toys on the internet — anything to help raise the money for Sarah.

As if international travel was not enough of a logistical nightmare on its own, the Hattersleys had to simultaneously contend with restrictions and safety concerns brought about by an unexpected public health emergency.

“We had a flight booked for September 2020, then had to cancel, because the pandemic was in full flow by then,” Hattersley said. “So we postponed it to May of 2021, thinking it would all be fine by then.”

As May approached, the United Kingdom still had a cross-borders travel ban in place for its citizens, and the United States was not allowing in most European travelers.

“We had these restrictions to try and grapple against,” Hattersley said, noting that the family applied for medical visas and waited for weeks without hearing back. As May crept closer, “we didn’t know whether we’d be allowed … we were frantic.”

The family was approved for medical travel to the U.S.A. by a simple email, days before their flight — a nonrefundable fare, booked beforehand without any certainty they’d be credentialed to fly. But the day prior to takeoff, another email arrived, inexplicably revoking Craig and Felix’s visa status.

“It was all really stressful,” Hattersley said. “It’s pretty difficult to get any information from the U.S. Embassy.”

The four, not keen to be separated, decided to go together to the airport regardless, visas or not. There was questioning at every gate and checkpoint on the two flights from Britain to Roanoke, but the Hattersleys arrived nonetheless together.

“My advice would be: don’t travel in a pandemic, and do not travel with a toddler,” Hattersley said. “It’s definitely not easy trying to travel against the travel ban.”

After a precautionary weeklong quarantine, practitioners from the Neuromotor Research Clinic at the Fralin Institute spent four hours daily, five days of the week from May 24 through June 18, helping young Sarah Hattersley work through intensive therapy sessions.

“Sarah has come on leaps and bounds,” Hattersley said. “She is overall much happier and more alert.”

After weeks of heightened attention from clinicians, Sarah is doing things she previously did not: sitting up unsupported or on a bench, playing with toys or anything else put in front of her, acknowledging and smiling at people around her.

Stephanie DeLuca, director of the institute’s Neuromotor Research Clinic, said in an email intensive therapy likely helps children learn by giving them so much input and positive reinforcement that it forges new connections in their brains.

Regardless of the scientific reason, Sarah now understands simple sentences, responds to basic instructions and attempts to use sign language to say “more” and “all done,” where before she did not communicate in any way, her mother said.

“Before when we had physio in the UK, she’d start crying and I’d be like, ‘Oh, she’s had enough,’ and then I’d cuddle her and we’d just give up, because I don’t like seeing her upset, but now I know,” Laura Hattersley said. “Even if she’s really upset after half an hour, if you just push through it, an hour later she might be smiling and playing.”

From a lab at the Fralin Biomedical Research Institute, Konark Mukherjee has studied the effects of the CASK gene mutation since 2011. The mutation was first recorded in medical literature only in 2008, he said.

“CASK is a just a gene, with a very essential function in the nervous system,” Mukherjee said. “If you have mutations in that gene, it can give rise to severe pediatric neurological issues.”

With as much knowledge as just more than a decade of research provides, Mukherjee explained CASK gene mutations — and perhaps other related neurodevelopmental disorders like, for example, Rhett’s Syndrome — seem to cause cell death in random areas of a child’s brain. Some parts of the brain retain their function, while other areas die off entirely.

Mukherjee’s focus is finding a medical treatment, providing pharmacy to complement therapy like that received by little Sarah Hattersley.

“Our work continues to progress, we continue to make new discoveries that surprise us and everybody else,” Mukherjee said, noting that science is taking its course as old interpretations are corrected. “A lot of things that I knew or saw when I started this study seem not to be accurate.”

Mukherjee said his team is trying to secure funding to start preclinical drug studies on lab mice, using brands identified as potentially beneficial during the past decade of studies.

“It can be painfully slow at times I think for parents,” Mukherjee said. “For me, 10 years is not much, but for a kid — they’re already 10 years old… so I understand the angst and anxiety.”

But when research — or anything — relies primarily on federal grants, money trickles slowly.

“My major struggle right now is, how do I convince any agency to invest in something which is so rare?” Mukherjee said. “That’s a continuous battle.”

The answer, he said, is perhaps to focus on the basic science of the rare CASK mutation. It’s science that will likely interest the National Institutes of Health and others who are studying related genetic disorders.

Laura Hattersley said she was sent back overseas with videos and activities to practice with Sarah at home, providing plenty of homework for the family. With new focus on greater potential and still recognizing the long distance ahead of them, the Hattersleys flew off for home last weekend.

“It’s made me realize what’s possible,” Hattersley said in reflection, thanking everyone who helped Sarah’s journey to Roanoke and back. “We should actually be pushing for more things once we get back to the UK.”

The Hattersley family’s resolution in 2022 is to further support 3-year-old Sarah, and the specialists studying CASK gene mutation on behalf of children like her.

Blinken, in Ukraine, calls on Putin to choose 'peaceful path' or face 'consequences'

A look inside the bubble for the 2022 Beijing Olympics

A look inside the bubble for the 2022 Beijing Olympics

Sarah Hattersley is introduced to a toy robot presented by Megan Price, an occupational therapist at Virginia Tech. Enjoying the moment are Sarah’s father, Craig Hattersley, while mother Laura Hattersley and the couple’s son, Felix, watch.

Sarah Hattersley recently received a treatment at the Fralin Biomedical Research Institute at VTC that her parents worked hard for her to get.