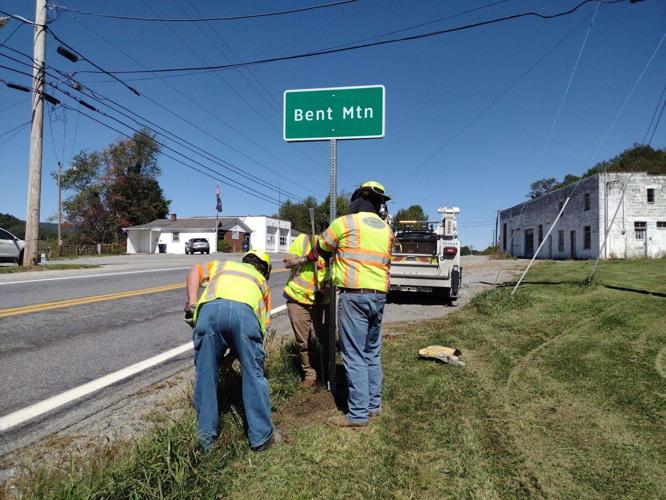 A crew from the Virginia Department of Transportation erects a new sign for Bent Mountain on Bent Mountain Road near Tinsley Lane on Wednesday. 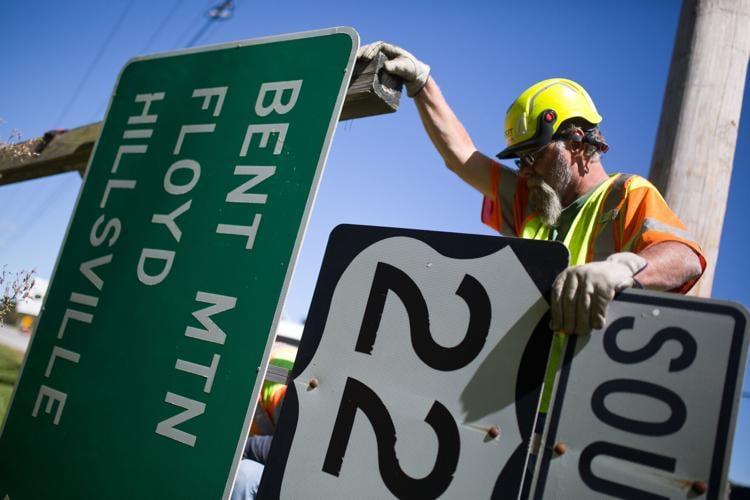 Equipment operator Bobby Vest and two other crew members from the Virginia Department of Transportation remove an erroneous highway sign in Bent Mountain on Wednesday.

Highway officials have settled a matter of some importance to the community of Bent Mountain and anyone who visits there.

It’s not where the signs say it is.

A series of green highway signs on the main drag — U.S. 221 – misstate the community’s location, an engineering review determined.

Authorities decided to remove the signs and start over, according to spokeswoman Jen Ward with the Virginia Department of Transportation.

Wednesday, the first of the new signs appeared.

Bent Mountain the community is an unincorporated area of Roanoke County partially on top of a mountain by the same name. It’s about a 30-minute drive southwest of Roanoke.

Wimmer was joking about there being a downtown. Bent Mountain is more than 90% agriculture, forest and rural home sites. There is one convenience store with fuel, one restaurant and one produce market. There are no traffic lights. A total of 820 people are spread across 12,789 acres at an elevation of about 2,600 feet.

That’s according to the demographic profile for the county’s Bent Mountain planning area, which appears slightly smaller than the Bent Mountain ZIP code on maps, but is roughly the same shape.

The community location signs that have been in place were installed years ago. Lacking government boundaries to go by, VDOT probably placed them according to its “best estimate” of where they belonged, Ward said. “Things have probably changed a bit from then to now,” she said, adding VDOT was happy to straighten things out.

One significant source of potential motorist confusion was a pair of signs between the Treehouse Tavern and Grateful Produce. One said “Bent Mt.” By itself, that was OK. The location, also near Bent Mountain Fire and Rescue, is arguably within the heart of Bent Mountain. But a different sign nearby read “BENT MTN 2” – meaning Bent Mountain was 2 miles away.

A motorist who traveled those 2 miles — going southbound as the sign indicated — found only rural homes and farms and was well on their way to Copper Hill, the next area to the south.

In response to the sign inconsistencies, VDOT decided to declare the center of Bent Mountain its part-time post office, which is beside B&S Mart. A new sign saying “Bent Mtn” sign faces each direction of traffic there. VDOT prepared a six-page sign sheet for the makeover, a copy of which was obtained by The Roanoke Times.

In addition, crews on Wednesday were pulling down the BENT MTN 2 sign, which is inaccurate, and the Bent Mt sign, also inaccurate now that officials have decided that the here-is-Bent Mountain sign belongs close to the post office. A new sign will go up between the restaurant and produce store telling southbound drivers that Check is 11 miles away, Floyd 25 miles and Hillsville 57 miles.

A starting player for the women's soccer team claims she was benched for refusing to kneel during a pregame unity ceremony.

Victims of hepatitis A outbreak to expand claims against Roanoke restaurant

More than half of the school's faculty responded to a survey in March and April.

CASEY: R.I.P to ‘the only man in Virginia who’s seen Elizabeth Taylor in a slip’

Ronkeith Adkins, 84, lived a life full of adventures, from rubbing shoulders with mobsters in Detroit as a boy to skydiving with D-Day veterans as a young adult. And at one time or another, he helped elect just about every Republican officer-holder in the Roanoke Valley.

Del. Marie March, R-Floyd, had alleged she was being harmed by actions related to a zoning disagreement.

Markus Maly, who was charged with pepper-spraying police officers, was taken in custody following the verdict

The latest development proposal that could impact Peppers Ferry Road would bring a mixture of apartments, duplexes and single-family homes to 33 acres.

Highway bridge repairs require reinforcement and replacement of a section damaged by a tractor-trailer crash.

DR Congo says more than 270 killed in massacre by rebels

A crew from the Virginia Department of Transportation erects a new sign for Bent Mountain on Bent Mountain Road near Tinsley Lane on Wednesday.

Equipment operator Bobby Vest and two other crew members from the Virginia Department of Transportation remove an erroneous highway sign in Bent Mountain on Wednesday.