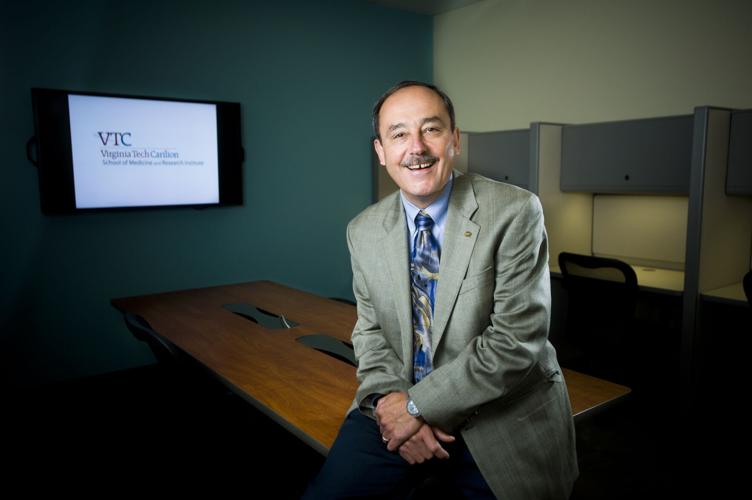 Richard Vari, senior dean of academic affairs, will officially retire from the Virginia Tech Carilion School of Medicine next year. He designed the school’s problem-based learning curriculum, which is only used at a handful of schools around the country. 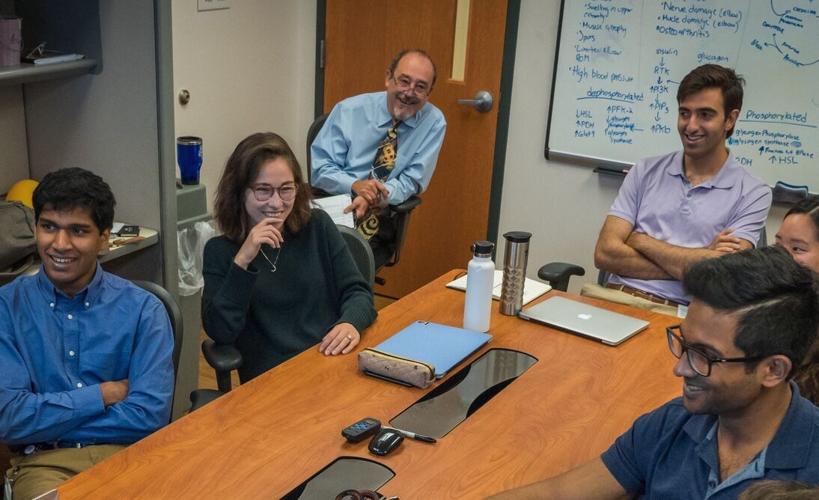 Richard Vari, a professor at the Virginia Tech Carilion School of Medicine, supervises his problem-based learning group during their presentations and student teaching sessions. Vari designed the curriculum after implementing a similar model at the University of North Dakota.

The founding dean of the Virginia Tech Carilion School of Medicine, Cynda Johnson, set out to recruit top educators when she established the new school in Roanoke.

At the top of her list was Richard Vari, assistant dean at the University of North Dakota, where he transformed the medical school curriculum into a new learning model.

Johnson said she wasn’t sure how she would convince Vari to come to Virginia, but she called him in the winter of 2008 and told him how great the weather was in Roanoke.

“I knew he was being recruited like crazy,” she said. “But that was my ace in the hole.”

Vari came to Roanoke and designed the medical school’s problem-based learning curriculum, where students learn basic sciences through real-life patient cases. The model is only used in a handful of medical schools across the country and has proven to be an effective tool for first-year students.

In the school’s first year, student test scores were 10 points above the national average and each student was eventually matched with a great residency program, Vari said. Now each year, 5,000 students apply to the medical school and only about 50 are admitted.

“It’s been a very successful program,” Vari said. “I came to help start a new school and I said I wanted it to be one of the finest schools in the country. I firmly believe that it is. Now it’s time for them to go forward.”

Vari, 67, completed his last day at the medical school in late October. He is now on medical leave after being diagnosed with Lou Gehrig’s disease, a neurodegenerative disease also known as amyotrophic lateral sclerosis that weakens muscles and affects nerve cells in the brain and the spinal cord.

“He’s really been the linchpin in putting the school together to make it what it is,” Johnson said. “It has exceeded everybody’s expectations.”

A foundation of its success is the school’s problem-based learning model, which leads students through different parts of the body each week. On Monday, students are given a real-life medical case. They work in small groups of seven to investigate the problem, diagnose and sometimes suggest a treatment.

At the end of the week, the actual patient in the case comes to the class and describes what the issue was like for them and answers questions. Through this process, students interact with a patient directly and learn the basic functions of each organ and bodily system — all while investigating and teaching themselves.

Dr. Michael Gallagher, who graduated from the school in 2017, said he chose the Virginia Tech Carilion School of Medicine because of both the curriculum and Vari himself, who he worked with in his first year.

He said he never met a more exciting or passionate teacher.

“As soon as he starts to talk, everybody listens because you know it’s going to be important,” Gallagher said. “He wanted us to come away with a thorough understanding. He has a passion for it and that seems to drive him.”

Vari said he never expected to become an educator and always imagined he would practice medicine in the mountains somewhere. He grew up in a coal mining town in rural Kentucky and was raised by his grandmother. He attended a two-room school above the local Catholic church with about five students in each grade.

Vari was later admitted into Upward Bound, a federal program that helps students from low-income families attend college. Through this program, he received a stipend, took remedial classes, and went on field trips, which marked the first times in his life he left his small town.

Vari attended one year at the local community college before he transferred to the University of Kentucky, where he earned his bachelor’s degree in biology and his master’s degree and doctorate in physiology. He was the first person in his family to attend college.

For years, he taught and also ran a lab focused on hypertension research. But Vari found his way back to education when he helped create the new curriculum at the University of North Dakota. Ever since, he’s had an immense passion for medical education.

Dr. Lee Learman, the medical school’s current dean, said Vari left a lasting legacy because of the curriculum he designed.

“All of our curriculum has his fingerprints on it one way or another, and still does,” Learman said. “He put his heart and soul into guaranteeing the best possible learning experience for students. He created an indelible impact on our school that will continue into the future.”

Vari said because of his diagnosis, it was the right time for him to retire. He now plans to enjoy the mountains with Patty, his wife of 42 years, and said he’s proud of the school and the students he taught.

He said his best advice for current and future students is to put their trust in the school, the curriculum and themselves.

“Keep your eye on what brought you here,” he said. “Whatever your goals or dreams are, you can achieve that. Don’t worry about failure, don’t worry about setbacks. Because if you stay in the system and work as hard as you can, people will help you get through.”

Alison Graham covers health and technology. She’s originally from Indianapolis and a graduate of Indiana University.

Companies in Maryland and Florida are purportedly trying to pay Genevieve Gwynne with three $1,800 checks drawn on banks in New York and Arkansas. Those banks are real, but the companies say the checks are phony. Gwynn doesn't understand why they would be sending her money at all. She suspects it's a scam.

In his new function, which he’s set to start on July 11, the former Montgomery County schools superintendent will focus on the development and expansion of programs in the Wytheville, Roanoke and Harrisonburg, according to a recent announcement from enCircle.

Medical marijuana patients used to have to wait weeks for the Virginia Board of Pharmacy to issue medical marijuana cards, which entitled them to buy weed at legal dispensaries. Now, no card’s necessary. But a prescription still is.

James T. 'Tim' Callis' single-engine plane has just taken on fuel when it began circling back toward Ohio County Airport in a rural area of western Kentucky. An eyewitness was quoted as saying the plane then nosedived and crashed.

According to a news release, Matthew C. Frazier, 54, of Clifton Forge, died when he was struck around 2:38 a.m. in the interstate's northbound lane  by an 18-wheeler which did not stop.

RAM House is in advanced talks to relocate its day shelter, lunch service and staff to a railroad-owned office building in the northeast quadr…

Alyson Clark is one of thousands in the last 20 years who have moved through the Virginia foster care system. And her story serves as only one example of children who can be further traumatized by a system designed to protect them.

A $2.2 million repair job is underway to reopen a damaged section of the Blue Ridge Parkway near Roanoke in October.

Weather Journal: It's 'Derecho Day' a decade after it blew through Roanoke/NRV

The Roanoke County Fire Marshal’s Office continues to investigate the cause of the fire, which caused $500,000 in damages to the music store.

Richard Vari, senior dean of academic affairs, will officially retire from the Virginia Tech Carilion School of Medicine next year. He designed the school’s problem-based learning curriculum, which is only used at a handful of schools around the country.

Richard Vari, a professor at the Virginia Tech Carilion School of Medicine, supervises his problem-based learning group during their presentations and student teaching sessions. Vari designed the curriculum after implementing a similar model at the University of North Dakota.