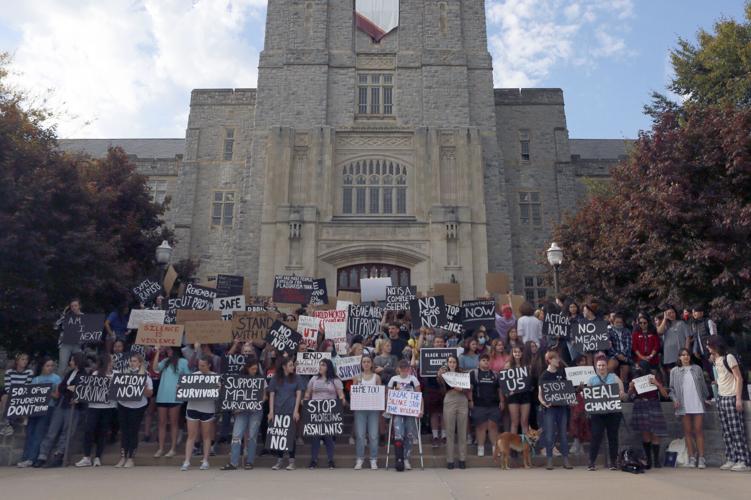 More than 200 gathered on the front steps of Burruss Hall at Virginia Tech Tuesday to protest acts of sexual violence. Those in attendance Tuesday criticized the practice of current Title IX policies and demanded more sweeping systemic changes. 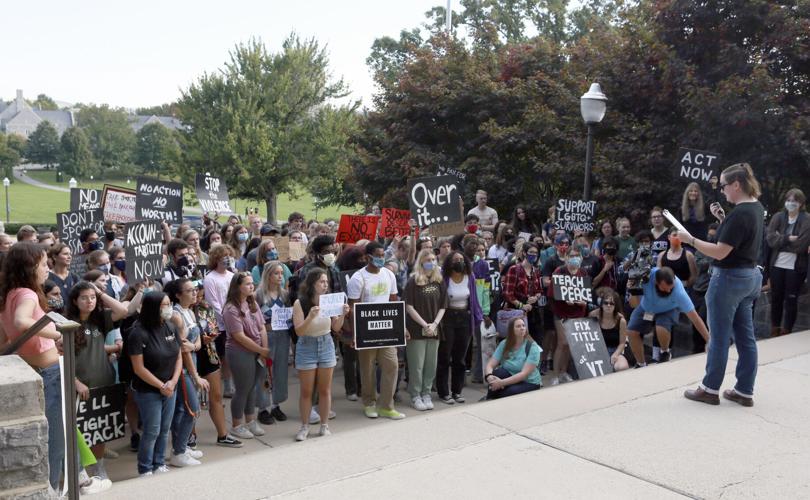 United Feminist Movement Education Chair Larissa Schneider reads from an open letter to the university administration demanding a comprehensive response to sexual violence at the university during a protest Tuesday at Virginia Tech.

BLACKSBURG — Well over 100 people turned out on the steps in front of the entrance to Burruss Hall on Tuesday evening to again take Virginia Tech to task over its handling of sexual assaults on campus.

Many held signs, some of which included messages such as “Stop the violence” and “Accountability now” and more elaborate ones such as “Why are more people expelled for plagiarism than sexual assault?”

The protest was organized by members of the United Feminist Movement at Tech, who argued that the university’s responses to cases of assault over the years have ranged from being insufficient to dismissive.

It was similar to a protest of about the same size on campus in 2019.

Those in attendance Tuesday criticized the practice of current Title IX policies and demanded more sweeping systemic changes by the school’s administration to more effectively and proactively address assault and provide stronger protections for victims. One issue they pointed out, for example, is the number of assaults that have occurred at Tech sponsored events, such as football games.

Graduate student Larissa Schneider, the education chair for the UFM at Tech, argued the university’s policies have not alleviated but have instead continued to perpetuate the “rape culture.”

“Sexual violence is not a new problem at Virginia Tech,” Schneider said. “Virginia Tech knows there’s a problem. They’ve known this is a problem for a long time.”

A flyer on the event stated Tech has for years failed to broadly address the ongoing problem and called on the university to create a “comprehensive university-wide action plan committing to accountability and transparency.”

Schneider provided a letter from the UFM addressed to Tech President Tim Sands and other top administrators, including Dean of Students Byron Hughes.

While the letter complimented some of the efforts of the Title IX office and the Women’s Center, it called for more measures to address the issue of sexual assaults.

“It is not a problem that can be merely delegated to the Title IX office or the Women’s Center to ‘deal with,’” the letter reads. “This expansive issue requires coordinated efforts across the university, including Student Engagement and Campus Life, Human Resources, Student Conduct, Housing and Residence Life, Fraternity and Sorority Life, Cook Counseling, among other offices.”

The letter continued: “Virginia Tech administration must acknowledge the ongoing problem of sexual violence, while being transparent with the community by publishing semesterly updates and yearly reports about their efforts. These updates and reports must be disseminated throughout the Virginia Tech community by email and made permanently available online.”

During the event Tuesday, some victims also stepped up to briefly share their stories. One, shared by sophomore Cam McDermott, concerned two incidents that occurred last fall that she said were never properly pursued by the university.

McDermott said one of her assailants was given the choice to leave and did in fact take that option, but she added that the other is still on campus.

“I still have trouble being on campus knowing the person who raped me the first time is still walking here,” she said in an interview.

Universities are required by federal law to alert the public about crimes on and near campus.

Direct figures from the university were not immediately available Tuesday, but a count of online archives found Tech issued at least 12 sexual assault crime alerts so far this year.

Many sexual assaults happened in residence halls between students who were acquaintances, according to the alerts. But other assaults this semester occurred between strangers during school-sanctioned events.

At least four sexual assaults were reported from within a dense crowd during the semester kickoff concert held on the campus Drillfield on Aug. 27, according to university crime alerts.

Another crime alert said an assault occurred between unacquainted people in Lane Stadium on Sept. 3, the same day as the Hokies’ football home opener, according to a crime alert.

“Our message is this: We care about this and we’re going to do everything we can to prevent these things before they happen,” Polidoro said. “If it does happen, we’re here for you and we care about it.”

Because social gatherings returned to campus this semester after an 18-month absence due to pandemic measures, university officials ahead of fall semester anticipated an uptick in student misbehavior, the response said. Virginia Tech planned an approach focused on safety, education, preventative programming and increased messaging, plus additional support for victims, the response said.

“The university is united, along with our community partners, in our determination to prevent this intolerable behavior and support the survivors who suffer as a result,” said Sands in the response.

Preventative messaging starts during student orientation, according to the response. Additional university efforts are underway to teach a “Bringing in the Bystander” initiative that empowers students to intervene when they see harassment and violence.

“Everybody is collectively feeding resources to this,” said Virginia Tech Police Chief Mac Babb in the response. “We’re all part of a consistent group trying to do something to benefit the whole.”

Sands offered another statement on the overall issue this past Thursday, including the university’s sharing reports of sexual assault in compliance with the Clery Act.

“Tomorrow’s daily email will include updated information about Virginia Tech’s commitment and initiatives to prevent sexual assault, including resources for survivors and allies,” wrote Sands, who encouraged the reading of the story. “As leaders at Virginia Tech, we are committed to living up to our great responsibility to confront and address sexual violence in our community. We are stronger when we each take responsibility for doing our part. It will take all of us, working together, to make Virginia Tech a safer campus for our community and those we care about.”

More than 200 gathered on the front steps of Burruss Hall at Virginia Tech Tuesday to protest acts of sexual violence. Those in attendance Tuesday criticized the practice of current Title IX policies and demanded more sweeping systemic changes.

United Feminist Movement Education Chair Larissa Schneider reads from an open letter to the university administration demanding a comprehensive response to sexual violence at the university during a protest Tuesday at Virginia Tech.