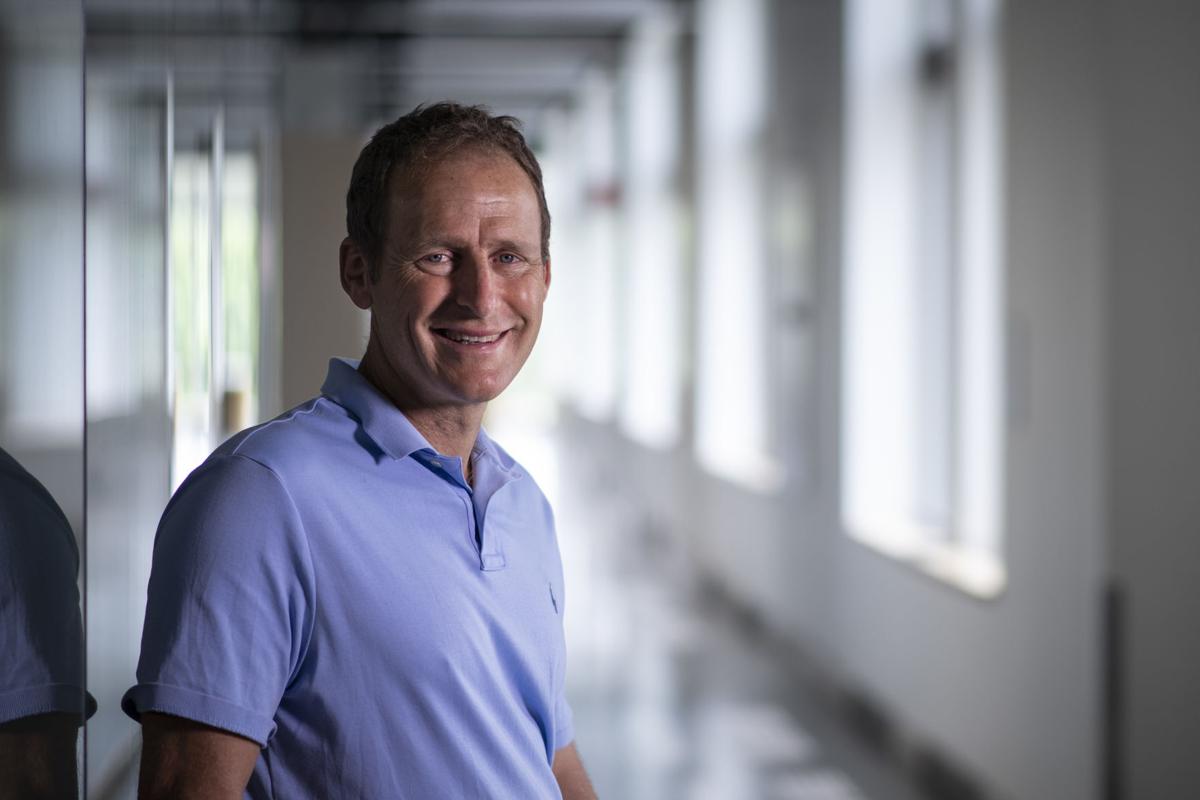 Professor William Ducker and a team have created a surface coating that testing shows effectively inactivates the SARS-CoV-2 virus. 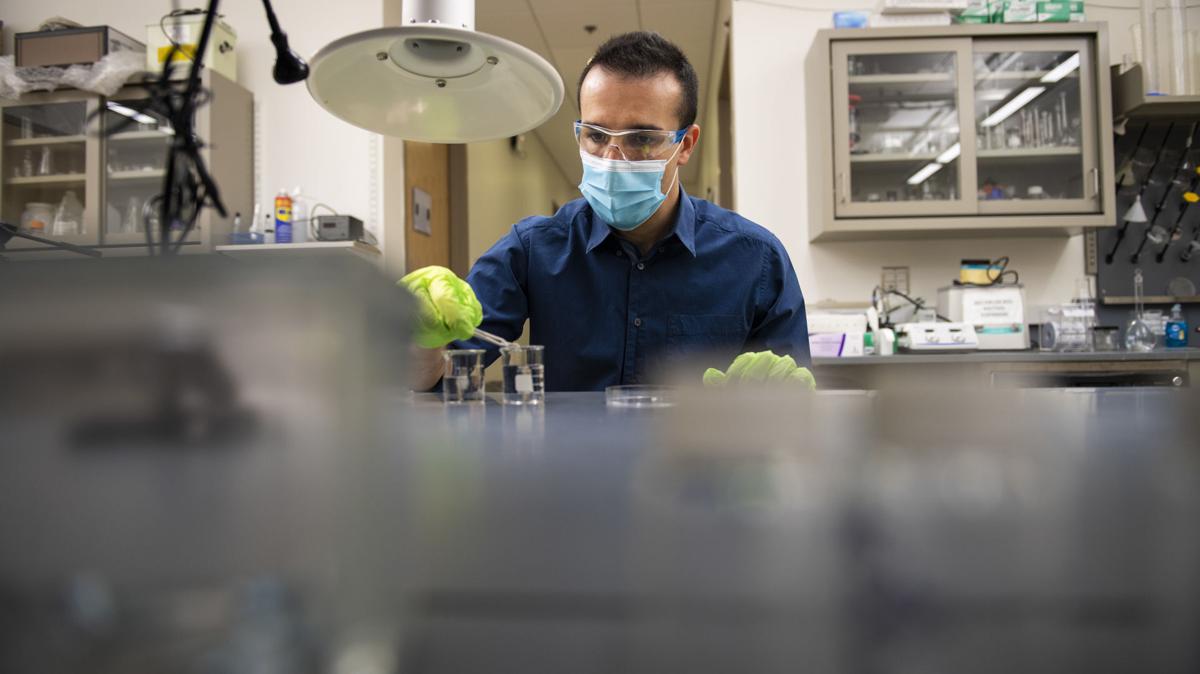 Mohsen Hosseini, a graduate student, works on samples in Gordon Hall at Virginia Tech’s campus in June. Hosseini is working with William Ducker and his team to develop a surface coating that inactivates SARS-CoV-2. 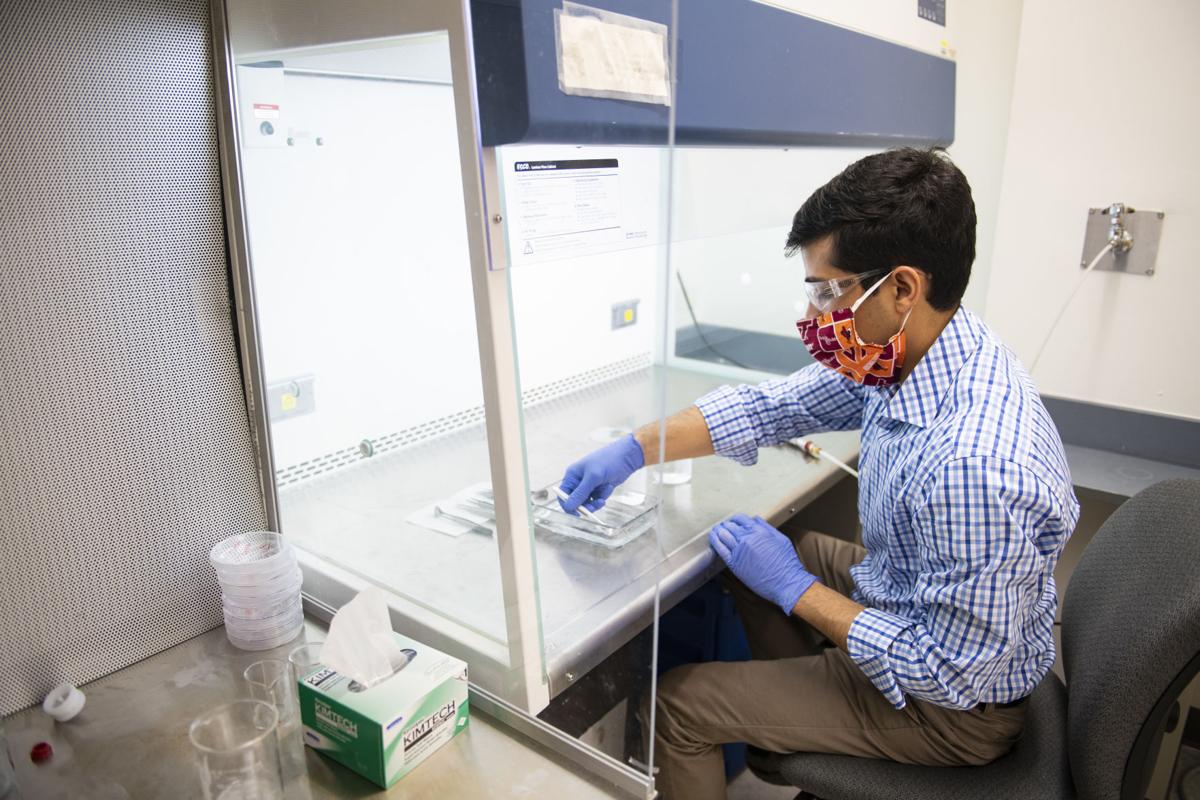 Saeed Behzadinasab, a graduate student, works on samples in Gordon Hall at Virginia Tech's campus in June. Behzadinasab is working with William Ducker and his team to develop a surface coating that inactivates SARS-CoV-2. 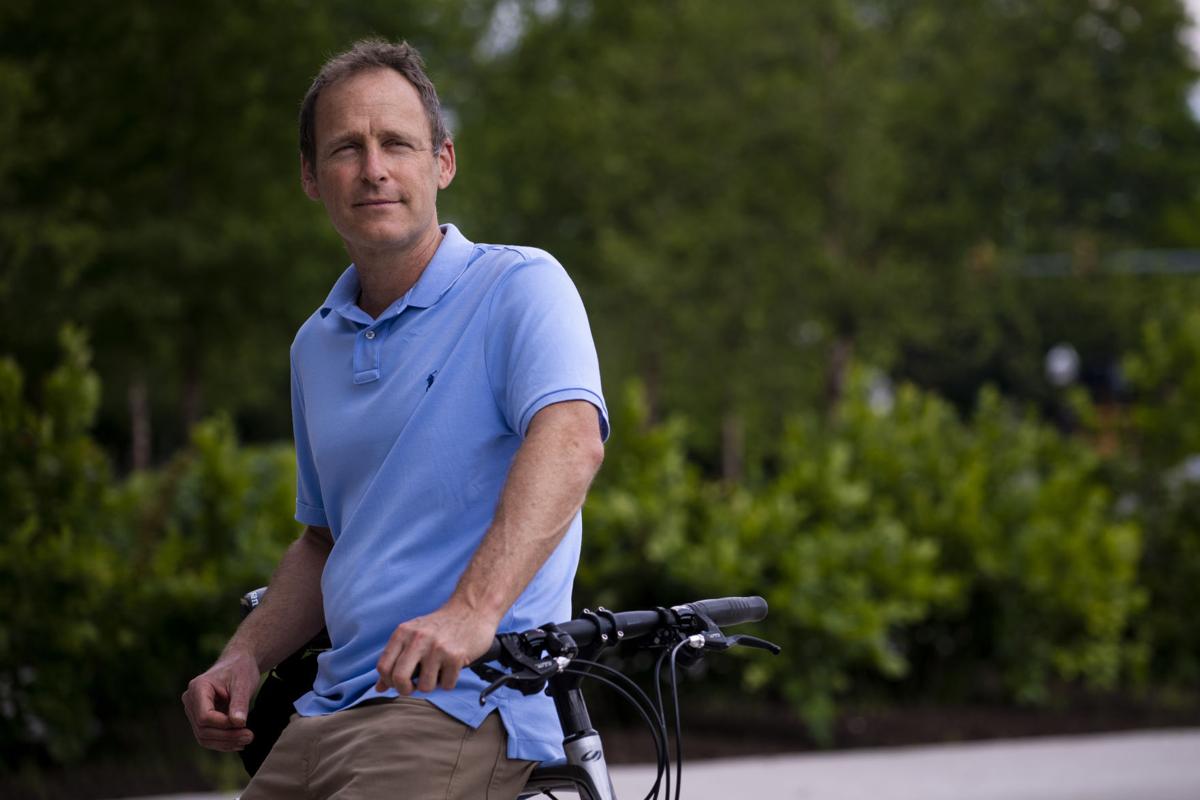 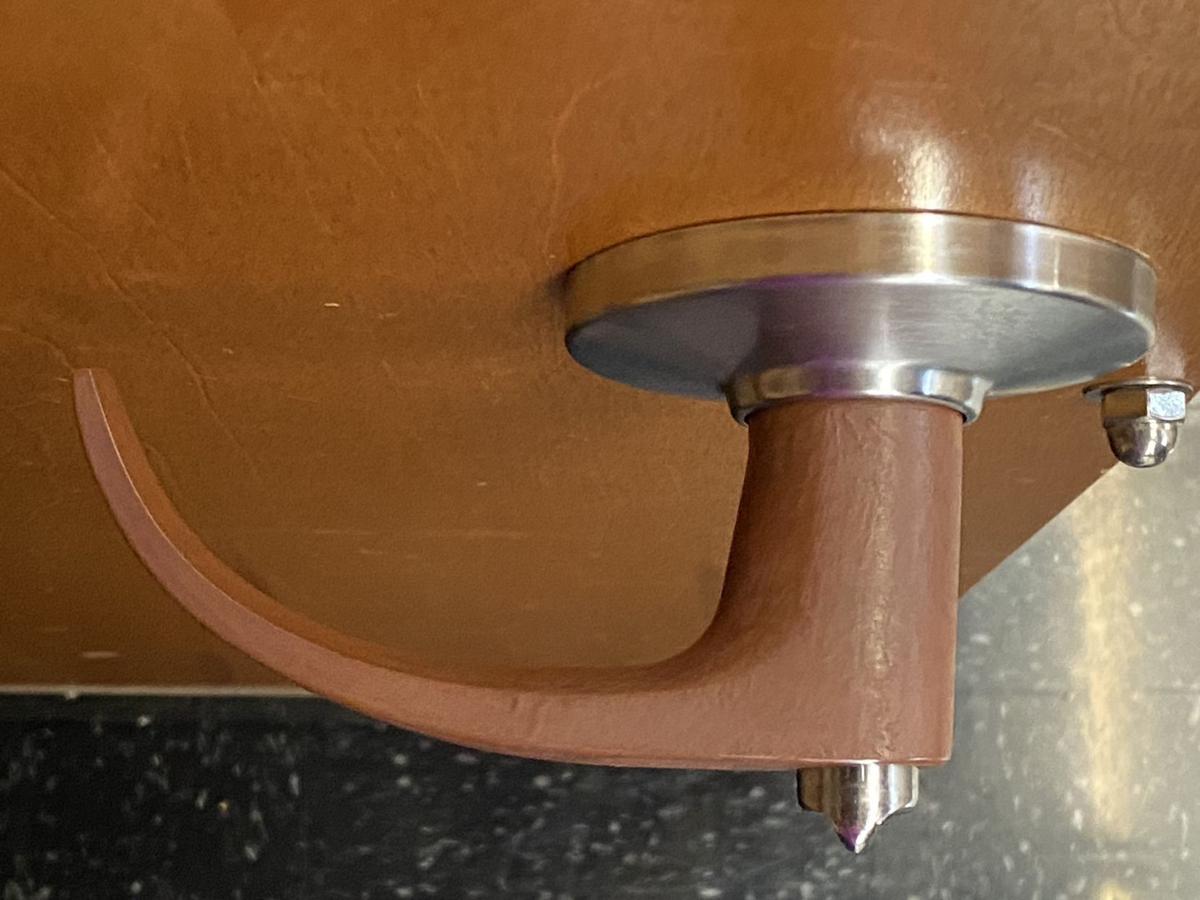 A doorknob with the coating has a distinctive coppery appearance.

Since earlier this year, William Ducker has not liked going to the supermarket and navigating a shopping cart around the aisles.

“Everybody is very worried about touching communal objects, and I’m one of those guys,” said Ducker, a professor at Virginia Tech.

But unlike everybody, Ducker’s field of expertise made him realize he could alleviate that worry.

“I’m a surface chemist. ... I look at surface coatings,” he said. “I thought I could fix this problem.”

So Ducker and a team of graduate students at Tech created a liquid coating that destroys SARS-CoV-2, the virus that causes COVID-19, when the coating solidifies on everyday items such as doorknobs and pens.

The thin layer of copper-based coating retains its virus-disabling property for at least six weeks, meaning such surfaces would no longer need frequent cleanings. Ducker says he thinks the coating could be effective for years, but is only confident about a few weeks because the coating has only existed for that long.

Last week, Ducker and colleagues became one, if not the first, team to publish an academic paper showing that such a coating is effective against the new coronavirus. “A Surface Coating that Rapidly Inactivates SARS-CoV-2” appeared July 13 in “ACS Applied Materials & Interfaces,” a journal published by the American Chemical Society.

The surface coating is made from particles of cuprous oxide, which can be made out of recycled copper pipes and wires, bound with polyurethane, a varnish commonly used to finish wood.

Although previous research has established cuprous oxide as effective against viruses, SARS-CoV-2 is a novelty. While conducting a Google Scholar search on the longevity of the virus on surfaces, Ducker came across the research of Leo Poon, a professor at the University of Hong Kong and a leading expert on emerging viruses.

Ducker emailed Poon: Would he be interested in testing the new coronavirus on his coating? Poon replied about 20 minutes later, and they began a collaboration.

“Honestly, I was unbelievably excited when Poon said he agreed to test it,” Ducker recalled. “And then after we found out it worked, oh my God, I was just so excited. I think this is just such a great thing.”

After about an hour on glass or stainless steel painted with the coating, the effectiveness of virus samples was reduced by about 99.9% on average, the paper says.

Poon’s team put bits of SARS-CoV-2 in little drops that mimic a respiratory droplet — which is how COVID-19 spreads — and plopped them on the coated surfaces. After varying periods of time, they lifted off the droplets and measured their viral communicability by attempting to infect a monkey kidney cell, a standard mimic of a human cell.

After being exposed to the coating, droplets could no longer infect the monkey cell, Ducker said.

Poon did not respond to two emails seeking comment for this story.

Swapan Ghosh, a polymer scientist in India who has developed a silver-based anti-viral coating, said the novelty of the paper lay in the experiment’s ability to test it on SARS-CoV-2.

“It’s good work, because in this pandemic, it’s very diligent work, so I appreciate it,” Ghosh said.

Ghosh questioned whether the surface coating would work in the dark, since light activates the antiviral properties in cuprous oxide. He also wondered whether the toxicity of the copper elements should be measured.

Ducker agreed testing the coating in the dark would be interesting, but doesn’t foresee that happening because the experiments are done in high-level biological safety labs that make such a test tricky. He also said since not many people will touch surfaces in complete darkness, the practicality of such a test is limited.

And while copper compounds are generally safe for humans — think about handling pennies — Ducker’s paper notes that cuprous oxide can harm marine life. Specifically, he noted adverse effects on the reproduction system of a certain type of mollusk.

“There aren’t a lot of mollusks growing on people’s doorknobs, so that’s not that big a problem,” Ducker said.

The surface coating remains effective even after being treated with disinfectants, the experiments found. And while one cannot distinguish by touch between a plain pen and a pen coated in the material, Ducker said, its coppery appearance signals to people that it’s safe to touch.

“The actual product, I think what I’m after, is people being and feeling safe,” Ducker said, which is why he wants to call the material SafetyCoat. “That was always my objective.”

And he foresees widespread application. He has tested the surface coating on a shopping cart handle, a pen and a credit card reader “Enter” button, among other everyday objects.

“It’s not just like an esoteric thing where there might be a doorknob across the president’s office that has a coating. We can apply this everywhere,” Ducker said.

A university spokesman said Friday there are no current plans for Tech to use the coating as part of its cleaning regimen when campus reopens next month.

For now, Ducker is focused on looking for investors who could help bring the surface coating into the mainstream.

“I definitely want to mass produce it,” he said. “I want it all over the place.”

Mechatronics and robotics teacher Shawn Burns was one of 18 recipients of the national 2020 Harbor Freight Tools for Schools Prize for Teaching Excellence.

Midway through the fall semester, Virginia Tech and Radford University are taking efforts to prevent a resurgence of COVID-19, with a mix of dos, don'ts and more tests.

Roanoke County schools will now be closed on Nov. 2, the day before Election Day. That's in addition to the existing teacher workday on Nov. 3.

The new Marketplace at Virginia Tech program will serve up to 75 students weekly with weekly packages of fresh produce and either vegetarian, poultry or beef protein options.

Professor William Ducker and a team have created a surface coating that testing shows effectively inactivates the SARS-CoV-2 virus.

Mohsen Hosseini, a graduate student, works on samples in Gordon Hall at Virginia Tech’s campus in June. Hosseini is working with William Ducker and his team to develop a surface coating that inactivates SARS-CoV-2.

Saeed Behzadinasab, a graduate student, works on samples in Gordon Hall at Virginia Tech's campus in June. Behzadinasab is working with William Ducker and his team to develop a surface coating that inactivates SARS-CoV-2.

A doorknob with the coating has a distinctive coppery appearance.