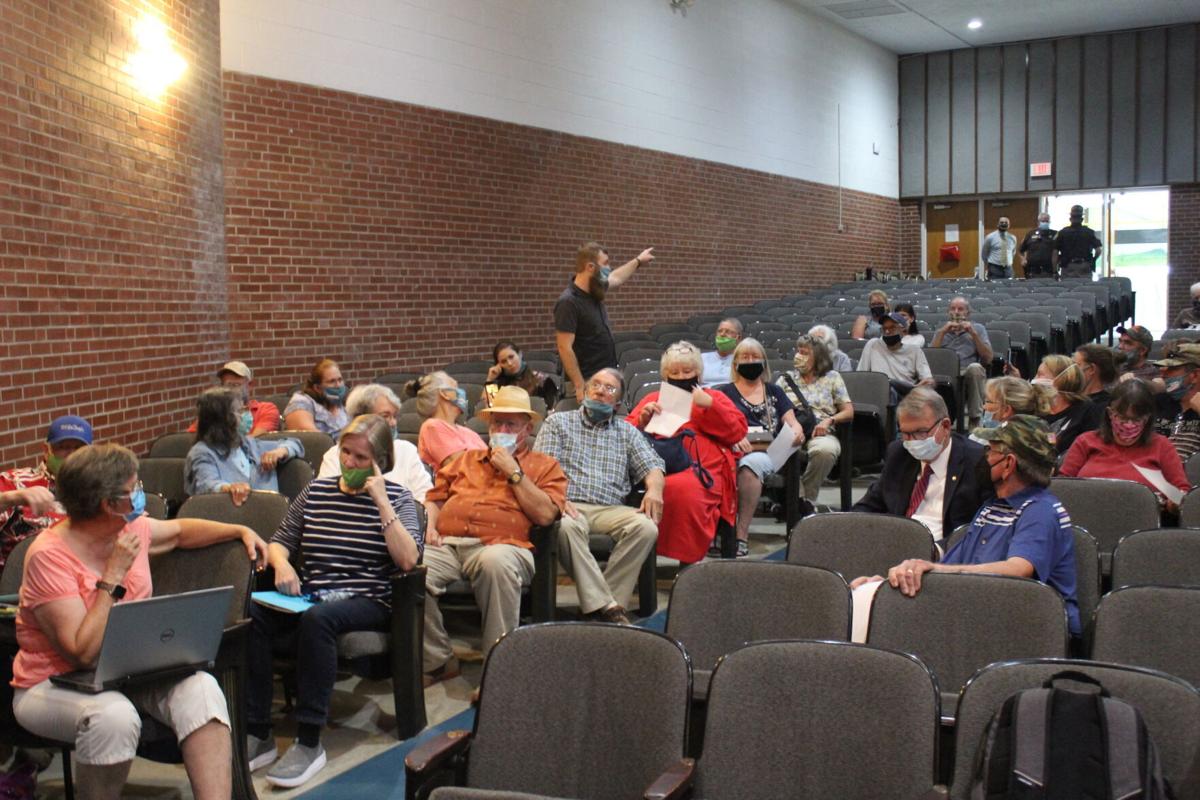 Hunter Crawford shares his anger regarding mask mandates with other community members during the Sept. 13 Floyd County School Board meeting, while the board was in closed session. 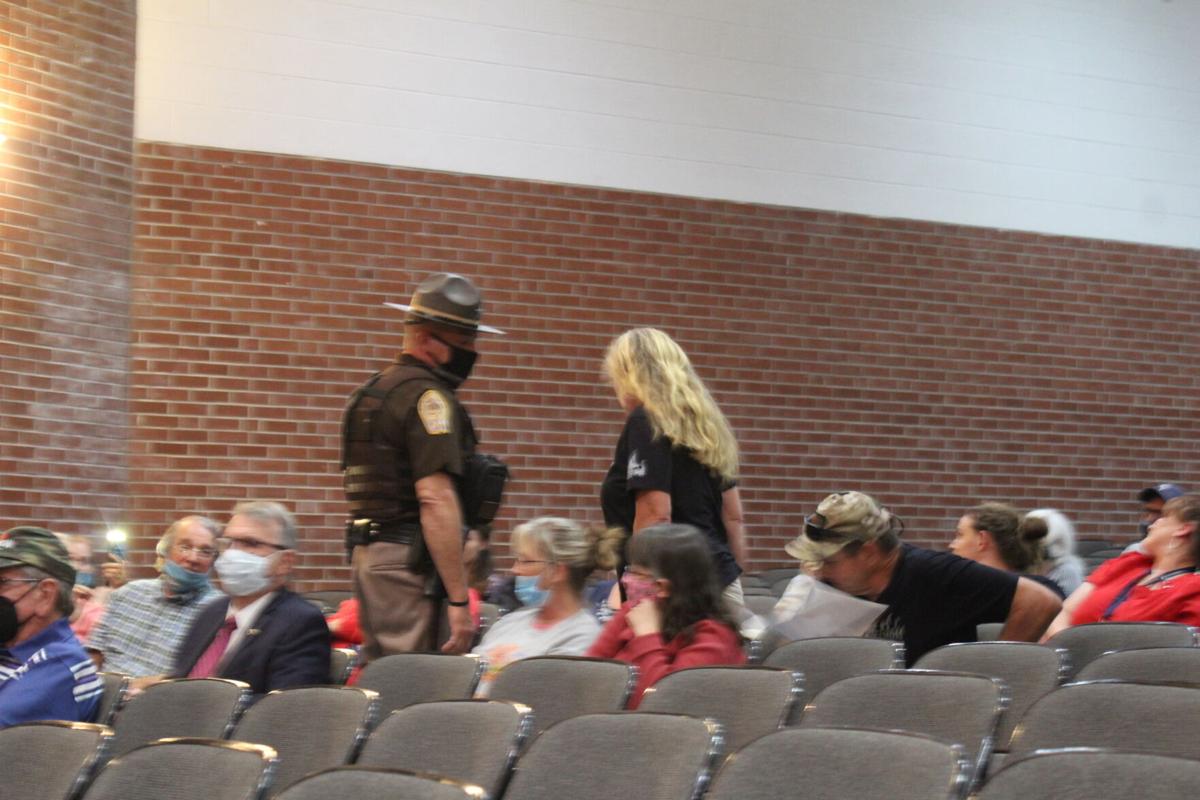 SWVA SWVA Kalinda Bechtold is escorted from the Floyd County High School auditorium after refusing to wear a mask on school property. Other community members were also asked to leave, and many took off their masks and left without being asked.

Most in attendance at Monday’s Floyd County School Board meeting stormed out in protest and solidarity after one woman refused to wear a face mask and was asked to leave.

The Sept. 13 meeting was the first since the recent surge in COVID-19 cases began and full in-person instruction resumed in Floyd County schools. It was also the first in recent months where face masks were required with no exceptions, and sheriff’s deputies were asked to enforce that rule.

The board cited Gov. Ralph Northam’s mask mandate for schools as reason for the enforcement.

A tense meeting from the moment it was called to order, largely because of the required masks, community members were outraged when the board entered a closed session immediately after Chairman James Ingram called the meeting to order.

The board went to another room at the high school for the closed session to discuss “disciplinary action of a specific student,” leaving community members in the auditorium, masked and agitated. The restless crowd used the time to discuss why they were there and what kind of leadership they expect from the local school district.

Floyd resident Jeff Dowd led those gathered in the Lord’s Prayer and said every board meeting should start with its recitation instead of a moment of silence, and many members of the crowd agreed.

Hunter Crawford and Kellean Gale suggested a mass exodus in response to the board entering closed session at the top of the meeting, but others said “that’s what they want.”

District C School Board candidate Renee Metcalf took the microphone of the podium and asked the crowd why it’s the same people at every board meeting, noting she would highlight parent involvement and consistent communication regarding FCPS changes if elected.

“These are your children, people, come to the school board meetings, make your voice heard, tell them what you want,” Metcalf said. “I’m running for school board to try to make things better, to try to represent you.”

Community members took the opportunity to voice where they feel the current Board falls short, from being morally qualified to communicating outside of meetings and public comment periods that are one-way with no responses from the board.

District E Board of Supervisors candidate Kalinda Bechtold chimed in with support, and explained to other members of the crowd the local elections in November are a chance to put conservative values at the forefront of Floyd’s political discourse.

When the board returned and certified its closed session, Vice Chairman Laura LeRoy made a motion that no action be taken regarding the student’s case, seconded by Tony Morisco—and then the public comments began.

A former teacher, Debbie Johnson, said discussions about masks and school bathrooms are distractions from the larger problem — schools encouraging students to view only school officials as trusted adults.

Numerous speakers told the board that requiring students to wear masks every day is overstepping its boundaries and harming students more than protecting them.

One mother, Heather Durham, said her daughter is being made to wear a mask despite a sore behind the child’s ear from another mask’s bands.

She said school officials “physically sewed” a mask on her daughter that was “so tight she couldn’t even get a drink of water it was so tight,” and “it had to be cut off.”

“It’s time the parents and the public in this school district make a change and take a stand. We’re the ones who voted you in, and we’re the ones that are going to vote you out,” Durham said, prompting applause and cheers from other audience members.

Durham was followed by Floyd resident Jeff Dowd who addressed each member of the board with “what the community has to say” about them.

Bechtold then approached the board with a story of a 1960 sit-in to protest segregation in Greensboro, North Carolina. Bechtol likened racism during the Civil Rights Movement to mask wearing during the pandemic.

“Fifteen days to flatten the curve has become masks everywhere, always. Take a shot, two or three, that you don’t want, or you are the problem. Now, you must be muzzled even after you take the jab? This defies basic logic,” she said.

“It is time to free our children from this irrational fearmongering and uncover their beautiful faces. Let parents decide to mask their own children, give them the shot or play outside barefoot. These are not your children,” she said, “these are our children.”

Near the end of her comment, Bechtold said, “We are starting here in Floyd County to reclaim our freedom,” and tossed her mask into the air before making her way back to her seat.

Chairman Ingram told her if she didn’t put the mask back on, she would be escorted out.

Bechtold responded that she had a medical condition and unless he or the board wanted to pay for an ER visit, she would not put it back on.

Bechtold was asked to leave and then escorted out by the deputies at the meeting, and the other community members gathered followed suit, many leaving masks behind in the auditorium.

Several questioned the deputies about their role in enforcing the mask mandate as they exited the school, asking if the deputies would be coming for Floyd’s guns next.

About a dozen community members remained in the audience for the rest of the meeting.

FLOYD — With less than 48 hours until the beginning of the school year, Floyd County Public Schools announced last night that masking will now be required indoors for all students, staff, teachers and visitors in county schools, reversing an announcement from last week.

Floyd County has reported more than 100 new cases of COVID-19 within about a month, part of an uptick occurring across the country that local health officials say is impacting mostly the unvaccinated, which includes 57% of county residents.

School Board urged to reject policy for transgender students

FLOYD — The crowd at the Floyd County School Board meeting Aug. 9 heard more than 40 public comments, reacting with applause and jeers as others mostly shared their thoughts on public schools adopting policies for the treatment of transgender students.

Floyd County Schools Superintendent John Wheeler made it clear to the Board of Supervisors last week that the school board and his office wants to make the rules they feel are needed to provide an education and safe environment for the county’s children without mandates from the Virginia Department of Education.

Hunter Crawford shares his anger regarding mask mandates with other community members during the Sept. 13 Floyd County School Board meeting, while the board was in closed session.

SWVA SWVA Kalinda Bechtold is escorted from the Floyd County High School auditorium after refusing to wear a mask on school property. Other community members were also asked to leave, and many took off their masks and left without being asked.