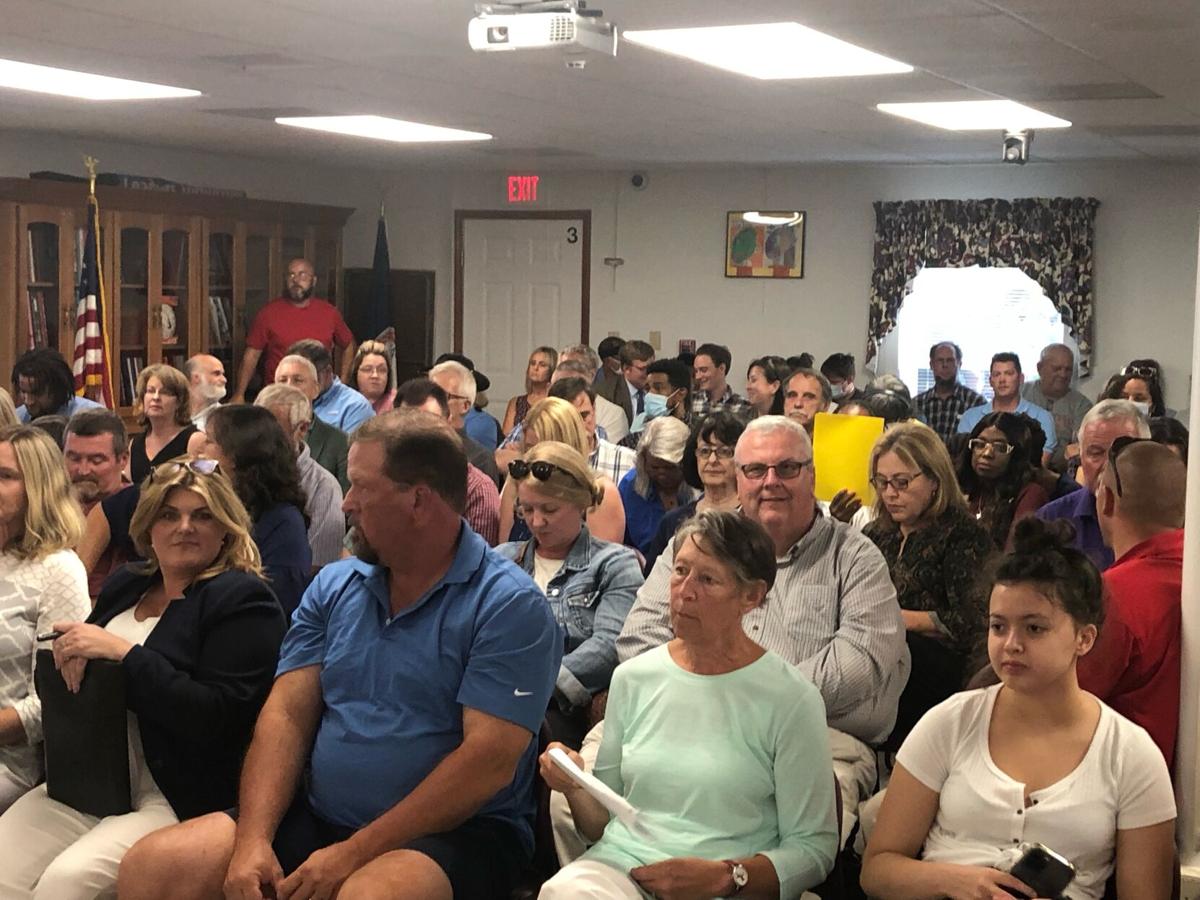 More than 80 people filled the Franklin County school board room to capacity during a meeting last month, with even more waiting outside under supervision of county sheriff’s deputies. 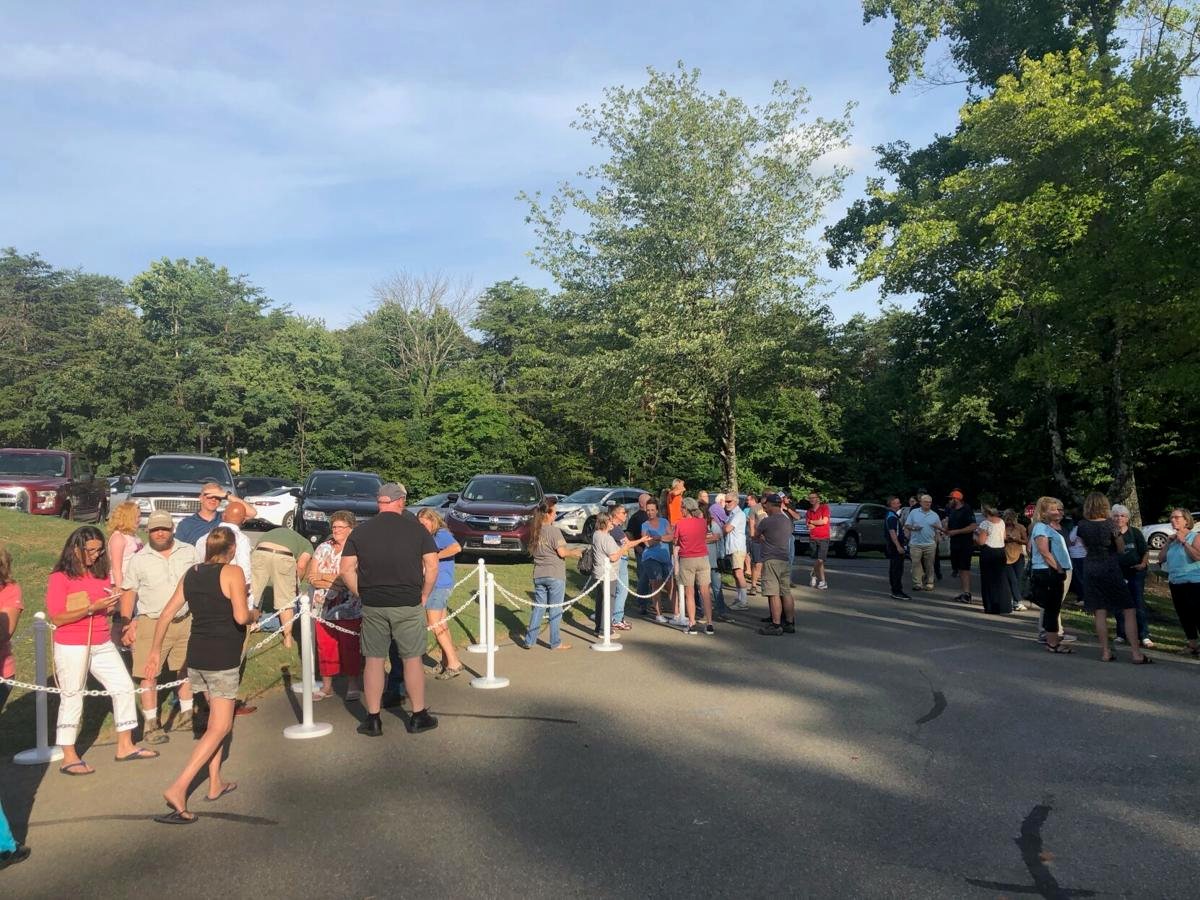 So many people attended Monday night's Franklin County School Board meeting with critical race theory on the agenda that there was a waiting line outside.

ROCKY MOUNT — The line to speak at Monday’s Franklin County School Board meeting extended past the edge of the parking lot.

As has happened in Botetourt, Bedford, and other Virginia counties, most had come to decry a perceived agenda that they described as pro-Marxist and anti-Christian, including face masks in schools, new state regulations about how schools deal with transgender students and the potential exposure of students to critical race theory.

More than four hours into the meeting, led by Schools Superintendent Bernice Cobbs, the staff essentially gave those who were still watching a history lesson in Franklin County schools’ policies and programs. These presentations were elicited by Boone District representative Donna Cosmato, who in June successfully lobbied the board to officially address the controversial transgender and critical race topics at Monday’s meeting.

Cobbs explained that the district has been adjusting its policies to accommodate transgender students for at least 15 years — so there is no need for the school system to adopt any new proposals from the state regarding that issue. She also emphasized again that critical race theory is not being taught in Franklin County schools.

In essence, critical race theory posits that institutionalized racism in the legal system and social constructions of race perpetuate the oppression of minorities. In recent months, conservative think tanks and media outlets such as Fox News have aggressively targeted critical race theory, charging that it creates division by broadly labeling the white majority as oppressors and racial minorities as victims.

Several speakers expressed impassioned concern that ideas from critical race theory are being taught under the guise of “culturally responsive teaching” or “cultural competence.”

Brenda Muse, the schools’ director of curriculum and instruction, explained that culturally responsive teaching is simply the most recent term for a program that’s been in the school’s curriculum for decades, that teaches students to appreciate their own culture and life experiences and those of their peers. “Every student who sits in a classroom needs to know regardless of your race, your culture, your customs, or your traditions that you have value,” Muse said.

“Cultural competence” is simply training for teachers in “the ability to interact effectively with people of different cultures,” Muse said.

School staff unveiled a proposal born from June’s discussion — a plan for the creation of a history advisory committee to suggest material that could be taught in addition to the requirements of the state curriculum. The school board unanimously voted to adopt that plan.

The case for creating the committee came in part from residents highlighting factual inaccuracies in changes to the history curriculum made at the state level. During Monday’s meeting, county resident Dan Shanahan asserted that a recent revision made to the history curriculum states that the Middle Passage — in which Europeans brought enslaved Africans across the Atlantic to the Americas — went on for 2,000 years. The correct figure is about 300 years.

Worries regarding transgender issues that were voiced repeatedly during the more than two-hourlong public comment session included apprehensions that if a child were to tell staff they wanted to change their gender and name, the child’s parents would not be notified, as well as outrage at the notion of children making unrestricted use of the restrooms designated for the opposite biological sex.

The school system’s attorney, Stephen Maddy, said that because of a 2018 federal court ruling, nationwide it’s illegal for schools to bar transgender students from using their preferred restroom.

However, the school system has rules in place such that, for example, a boy can’t just arbitrarily declare himself a girl and go into the girl’s restroom. Also, the school system is working to improve privacy in its restrooms, Cobbs said, assisted by federal Elementary and Secondary School Emergency Relief Fund money.

“Accommodations regarding restroom usage have been discreetly made for a variety of reasons in Franklin County Public Schools for many years,” Cobbs said. “The goal was to comply with the law in a safe and consistent manner.”

With Franklin County Sheriff Bill Overton watching and three ranking deputies providing crowd control, the meeting might have set a record for recent attendance and length, though it proceeded without the rancor that the discussion of critical race theory inspired in June.

The 44 people who spoke served as a representative sample of county voters, with 32 — 72% — explicitly condemning some combination of critical race theory, handling of transgender issues and mask requirements. That’s a number comparable to the 71% who voted for Donald Trump in November’s election and the 69% who voted to keep the county’s Confederate war memorial in front of the Franklin County Courthouse.

Cosmato has chosen not to seek reelection in November. Dawn McCray, who is running unopposed to fill Cosmato’s seat, spoke in opposition to critical race theory and recent Virginia Department of Education policies under Democratic Gov. Ralph Northam.

After the meeting, McCray said the school board “did a nice job” showing residents that their voices had been heard.

Nine of those voices cut against the grain. Retired minister Eric Anspaugh defended critical race theory. “I believe we must teach all history,” he said. “This includes teaching the history of chattel slavery, the institutionalizing of slavery, slavery and subsequent rebellion, Civil War, Reconstruction, Jim Crow, the civil rights movement, the Tuskegee project, redlining, G.I. Bill, Black Power movement, voter rights, criminalization of Blacks and people in mass incarceration and the list goes on.”

Advocate and educator Phoenix Keesee described himself as “a transgender adult who survived the statistics” which he then cited, saying transgender youth experience high rates of verbal and physical threats and deserve safe environments.

He responded to statements that support of LGBTQ causes goes against Christian doctrine. “God is a loving God and God is all creation as a beautiful mosaic.”

The final speaker was Madeline Pedersen, who as a Franklin County High School senior was a student member of the school board in January 2020, when a vote to ban Confederate flags from the school dress code failed on a 4-4 tie. Pedersen said she was shocked and disappointed “in the cowardice and the ignorance displayed by this board,” and that she regretted not speaking up more.

Five months later, the board voted 6-0 to ban displays of the Confederate flag.

With the issue of restroom use by transgender students on the agenda Monday, “I hope they don’t make an ignorant and intolerant decision again,” Pedersen said.

Finally, dealing with another major matter facing school divisions, the board, pondering newly released Centers for Disease Control and Prevention guidelines, scheduled a special meeting at 6 p.m. July 26 to discuss wearing of masks in the upcoming school year.

The word “maroon” has many meanings – a burgundy color or to be left alone in an isolated location like an island.

Montgomery County isn’t alone on the matter as the still ongoing challenges of the pandemic has led to school staffing shortages elsewhere in the region.

More than 80 people filled the Franklin County school board room to capacity during a meeting last month, with even more waiting outside under supervision of county sheriff’s deputies.

So many people attended Monday night's Franklin County School Board meeting with critical race theory on the agenda that there was a waiting line outside.