World Series: Follow updates as Dodgers and Rays face off in Game 4

Limiting screen time used to be a parenting challenge. With virtual learning, it's impossible. Here's what experts say.
0 comments
Share this
{{featured_button_text}}
1 of 4 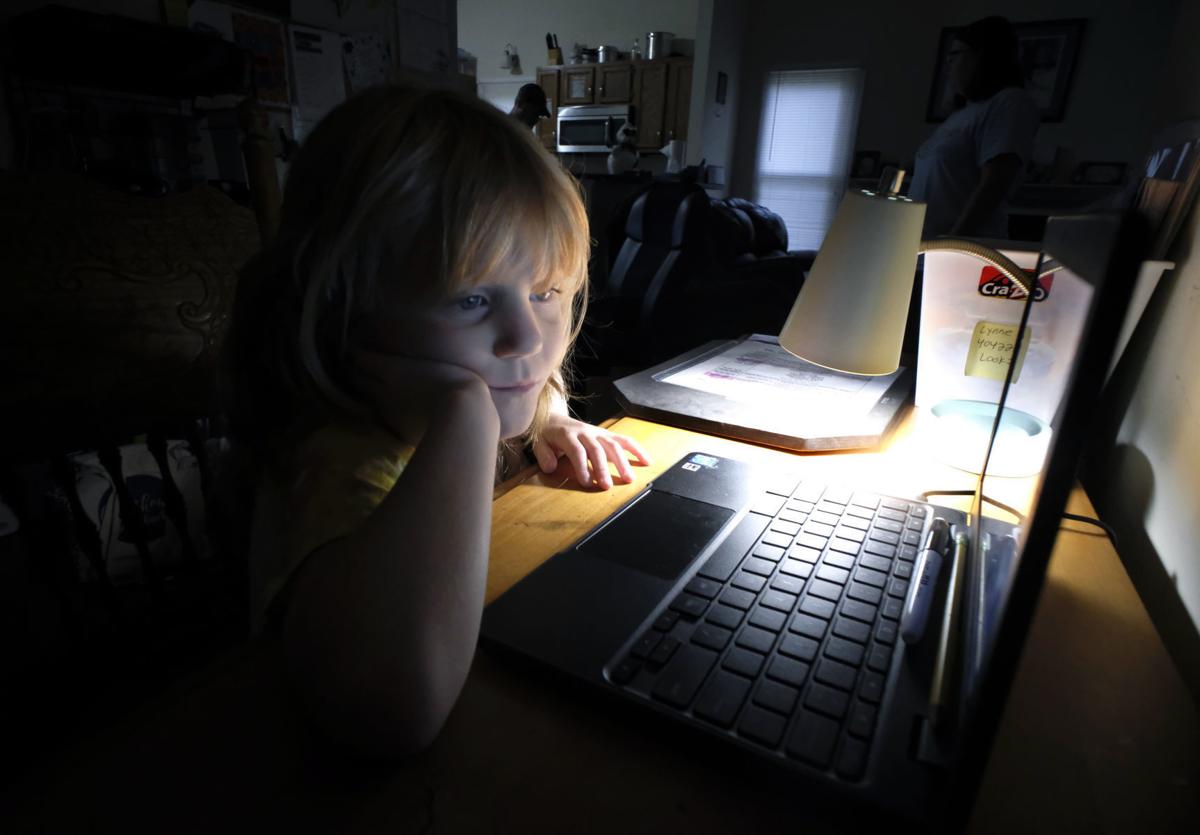 Lynne Kirby, 6, followed her classwork on a computer at home in Chesterfield County on Thursday. Since children’s school and social activities are now often tied to devices, families struggle with how to manage the screen time. 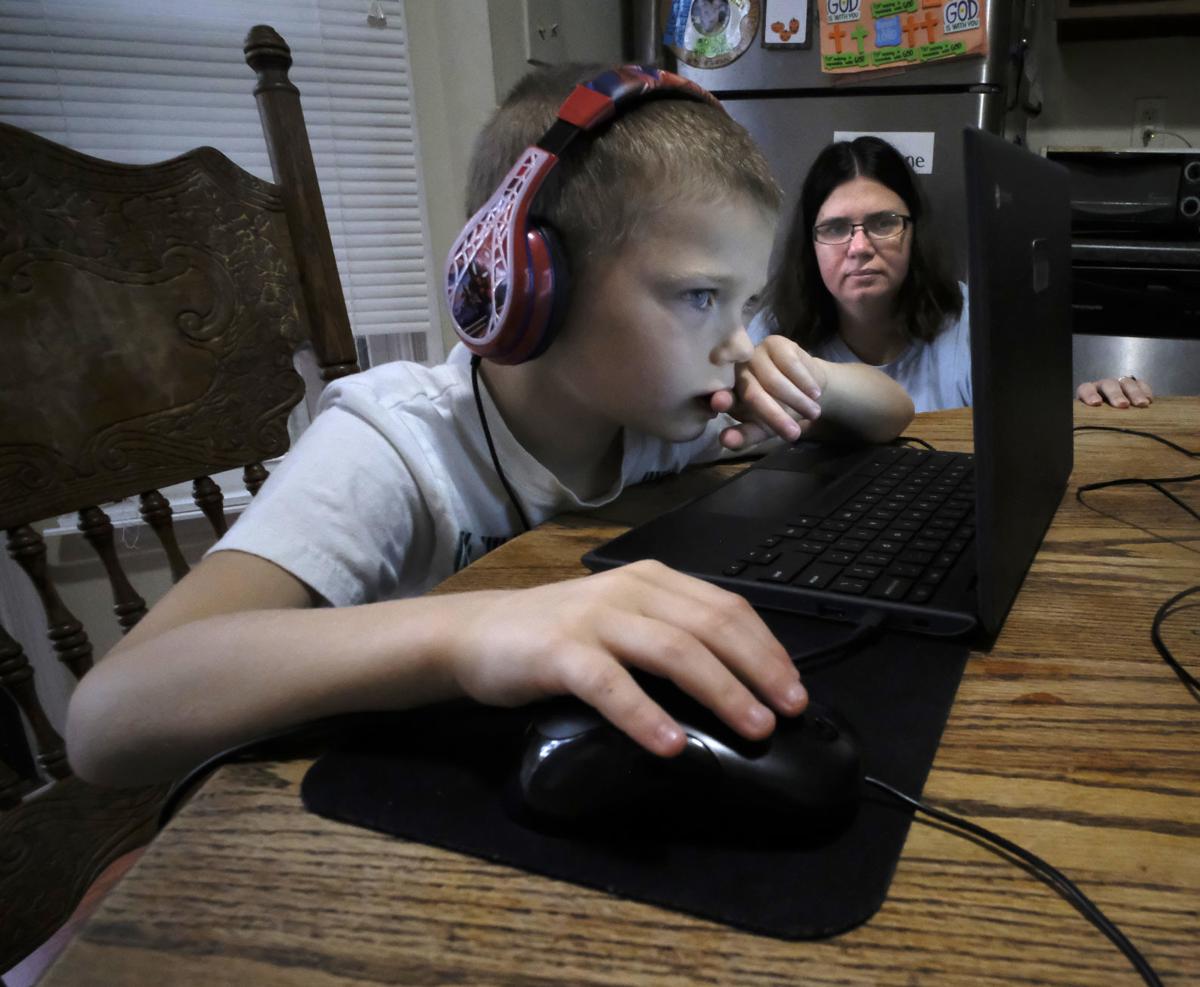 Lucas Kirby, 7, participated in virtual learning Thursday as his mother, Amanda Kirby, followed along inside the family’s Chesterfield County home. Amanda Kirby says her children typically must earn screen time as a reward. 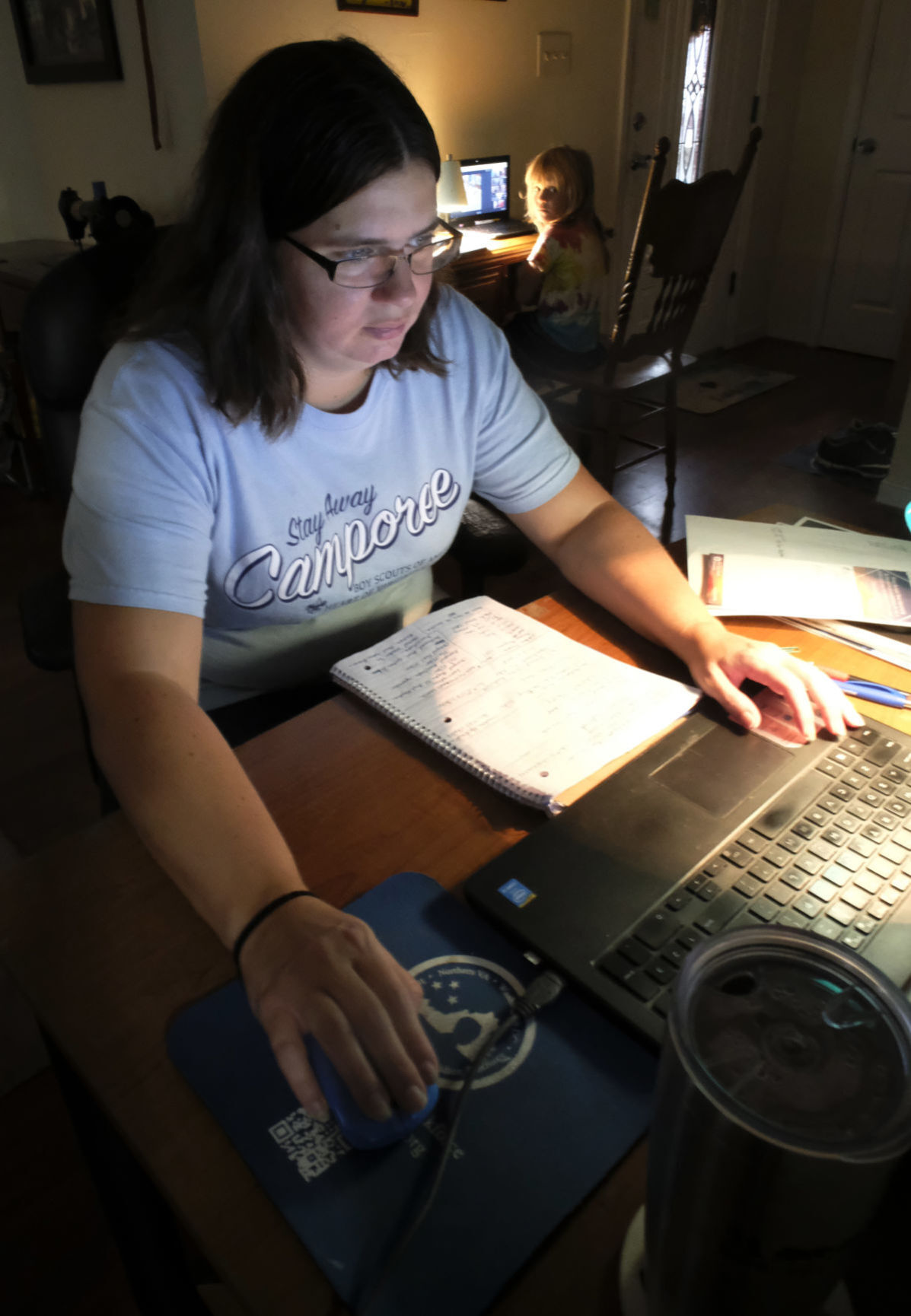 Amanda Kirby works on the bookwork for her husband’s business as she sits at her computer inside the family home in Chesterfiled, VA Thursday, Sept. 17, 2020. In the background, daughter Lynne, 6, looks up from her virtual schoolwork. 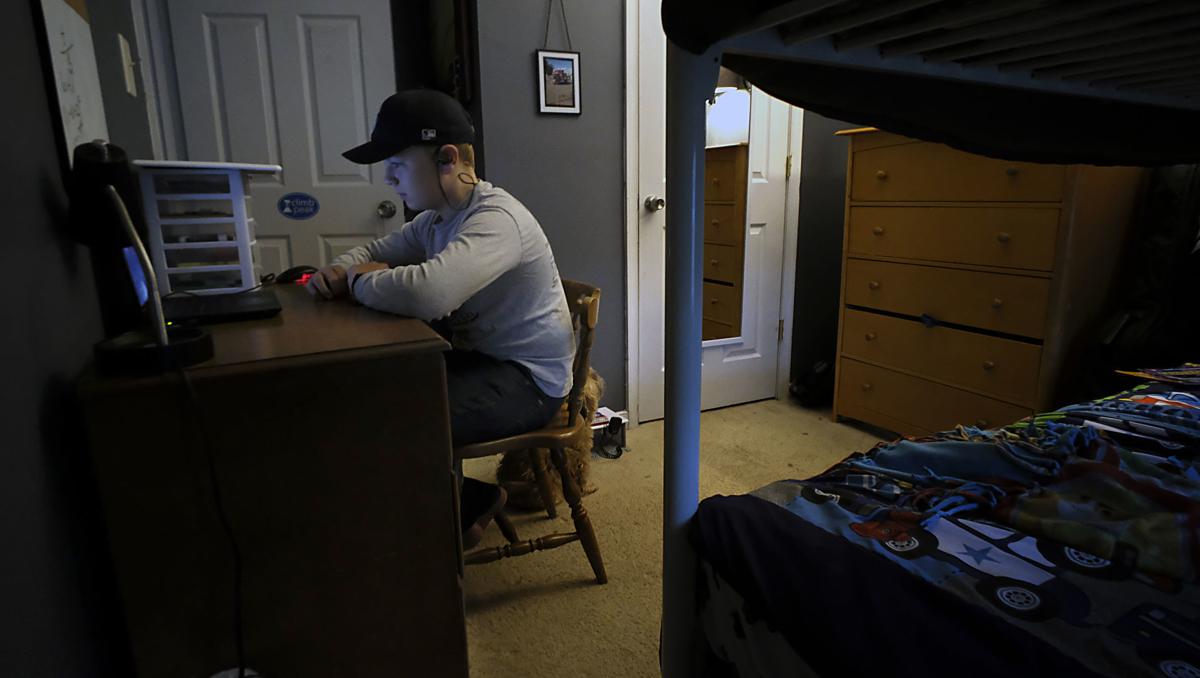 Gabriel Jordan, 12, follows his classwork on the computer as he sits in his room inside the family home in Chesterfiled, VA Thursday, Sept. 17, 2020.

The changes were gradual. The realization, however, hit like a ton of bricks.

Henrico County parent Debbie Long said she had a moment this past summer when she realized that all of her household rules about screen time for her two children, a second-grader and a fifth-grader this school year, had completely dissolved.

Admittedly, Long relaxed the rules last spring when the pandemic upended everyone’s world. Her children were allowed to be on the computer to connect with friends they couldn’t play with or join at school, either by chatting or playing online games.

But “almost immediately, I noticed them wanting to leave an activity when they heard a ding,” Long said by email, referring to the technological alerts used to notify a user of something new.

She disabled the notifications, but her kids fought any limits on screen time because “a new friend ‘just joined’ ” or they were playing a game and had enough points to buy a new virtual object “and there was no way to save” the game, she said.

“As the summer went on, my limits of one-hour on, one-hour off screens slipped away,” Long wrote. She realized that her children were either on her phone, her computer or her husband’s computer for most of the day.

“If they went outside to play for a few hours, it was considered a win,” Long said, “even though it is the complete opposite of our previous normal.”

“The change” she said, “was disturbing.”

Long could be any parent these days. Pandemic or not, corralling children’s screen time is one of the biggest challenges facing parents today.

Throw virtual education and required screen time into the mix — over which many parents have no control — plus their own needs to work from home, which leads to kids being entertained on devices more often, and therein lies the “perfect storm,” said Susan Holt, a certified and licensed family life coach based in Richmond who specializes in family dynamics and relationships.

“Everyone is talking about the virtual world that these kids are in,” she said, and in that virtual world, “a kid can get totally captured.”

Being connected to devices or TV for too long — and being disconnected from meaningful family time, exercise and other hobbies — means children lose out on critical physical and emotional development, she said. The issue isn’t necessarily the number of minutes or hours spent with technology — it’s the quality of the screen time and whether it’s beneficial or harmful, Holt said.

For example, virtual education is additional required screen time, but a student writing a critical thinking essay online or engaging with their teacher and peers in a virtual way isn’t the same as a child playing mindless video games far past bedtime without parental supervision, she added.

“They allow you to get totally consumed by what is in the machine,” Holt said about the devices and games readily available to kids, “and you’re not critically thinking.”

What’s worse, she said, is that “if [kids] are really locked up ... they begin to be passive consumers of a virtual world” — which means they lose touch with how to process their own feelings in the real world around them.

Dr. Tiffany Kimbrough is a general pediatrician at the Children’s Hospital of Richmond at VCU. She echoed Holt, in that research shows that children who spend excessive amounts of time with television, computers and personal devices at the expense of personal interactions with family and friends, physical activity and structured sleep are susceptible to developmental delays with language and fine motor skills — even attention disorders — not to mention childhood obesity.

Kimbrough said she helps parents through these issues by categorizing important developmental characteristics into “buckets.”

Most children on their own will use technology as entertainment, she said, but “to the detriment of one of their other buckets.” That means they’ll be on a device rather than engaging at the dinner table, or they’ll go to bed with their phone and then wake up throughout the night to check it, or they’ll spend much of their free time watching videos online instead of playing sports or exercising.

Parents are now dealing with virtual education, but Kimbrough said that means it’s even more critical that they prioritize social and emotional connections after the school days are over, or during the breaks in daily school lessons.

Chesterfield County parent Amanda Kirby said that in her home, devices and screen time are typically offered as rewards. None of her three children — who are in first, second and seventh grades this school year — have televisions in their rooms. Tablets stay in a drawer unless the children are allowed to use them, Kirby said, and even then they get only a certain amount of time on them.

If Kirby’s kids are done with homework or did a good job on an assignment, she may allow them to watch a 30-minute program before dinner, perhaps, or while their siblings are getting their nightly baths.

But she stops all technology 30 to 45 minutes before bedtime.

Kirby said she had some concerns about screen time when virtual learning was announced for Chesterfield’s students, but said she has been pleased that there are lots of breaks for students and lots of movement built into the lessons.

“I feel like it is a lot of screen time ... but they’re doing a good job breaking it up,” Kirby said about her children’s virtual school day. “It’s not just sitting and listening ... like they’re being lectured — they’re up and moving.”

Technology isn’t going away, so parents need to figure out how to best use it within their families, said Holt, the family life coach, and that comes down to simply strengthening family ties.

That can start by parents creating rules and boundaries for their families and clearly communicating those expectations — but also modeling them.

For example, families can decide that everyone turns off their phones during dinner or other family times so that they can all talk to one another, Holt said. Adults can put tablets down or turn off computers well before bedtimes so that children see that getting a good night’s sleep is important. The family can take bike rides or do some other sort of activity outside together, and if a child is watching television or their tablet, parents can watch it with the child and ask questions to stimulate creative thinking.

With all of these things, “you are helping them engage in a world where they are thinking for themselves,” she said, “and not letting something else think for them.”

Holt added: “As long as the virtual world doesn’t take over those things,” referring to the important social, emotional and physical moments for families, “you can do this.”

Long, the Henrico parent, said the start of the school year meant a reality check for her family.

She knows technology isn’t all bad and that schools have been using it for decades. For that reason, she said, the conversation shouldn’t be about not having screen time, but how kids are using it.

“Using ‘screens’ to connect students to an astronaut on the International Space Station cannot be compared to Fortnite,” Long said, referring to the popular online game.

She brought back the old rules for devices, such as no social media for her oldest child, and one hour for gaming or watching entertainment videos each day — not that the rules aren’t sometimes broken.

“Overall, my kids are spending less time on screens now than over the summer,” she said. The one-hour rule may sometimes be more like two, but they’re getting there.

Said Long: “Most important, today the technology in their lives is being used as a tool, rather than a tool that is using them.”

Regional rise in COVID-19 cases reflected in schools, who report uptick in infections

Several local school divisions have reported an increase of student and staff COVID-19 cases throughout the month of October, though in many cases the virus is being contracted outside of the classroom.

Virginia Tech on Monday said "every effort will be made" for more in-person classes during a spring 2021 semester to still be altered by COVID-19 precautions.

Round Hill Elementary in Roanoke has closed for two weeks after three staff members tested positive.

Mechatronics and robotics teacher Shawn Burns was one of 18 recipients of the national 2020 Harbor Freight Tools for Schools Prize for Teaching Excellence.

Anthony Swann, a fifth grade teacher in Franklin County, has been named Virginia's 2021 Teacher of the Year.

Midway through the fall semester, Virginia Tech and Radford University are taking efforts to prevent a resurgence of COVID-19, with a mix of dos, don'ts and more tests.

Lynne Kirby, 6, followed her classwork on a computer at home in Chesterfield County on Thursday. Since children’s school and social activities are now often tied to devices, families struggle with how to manage the screen time.

Lucas Kirby, 7, participated in virtual learning Thursday as his mother, Amanda Kirby, followed along inside the family’s Chesterfield County home. Amanda Kirby says her children typically must earn screen time as a reward.

Amanda Kirby works on the bookwork for her husband’s business as she sits at her computer inside the family home in Chesterfiled, VA Thursday, Sept. 17, 2020. In the background, daughter Lynne, 6, looks up from her virtual schoolwork.

Gabriel Jordan, 12, follows his classwork on the computer as he sits in his room inside the family home in Chesterfiled, VA Thursday, Sept. 17, 2020.