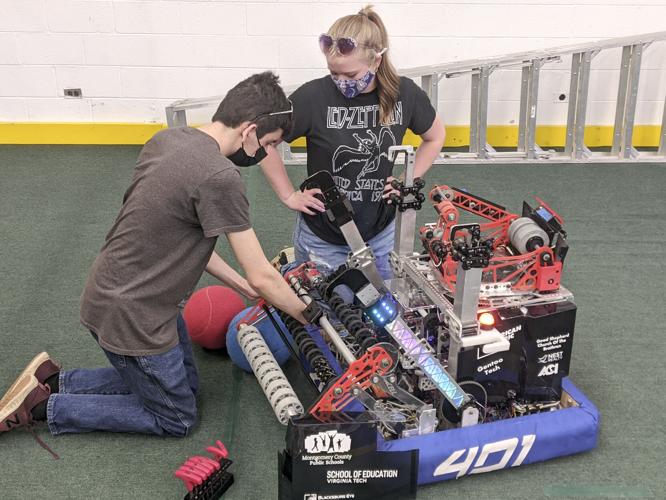 From left: Ash Coyle, outreach leader, and Abby Lafon, design leader, tinker with this year’s robot. Their sponsors’ names are displayed on its side. 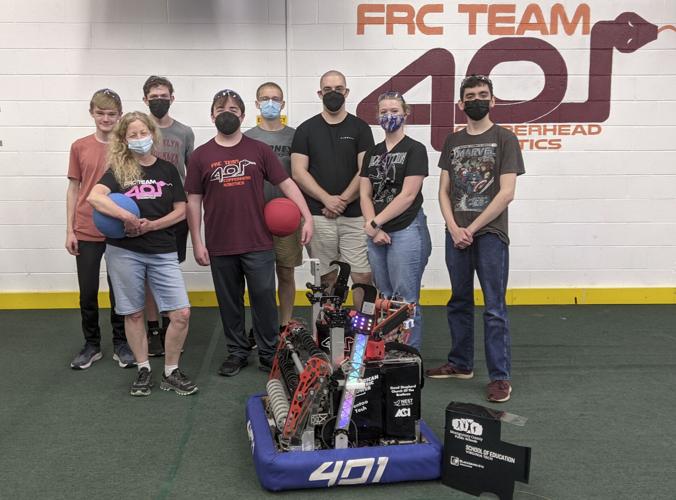 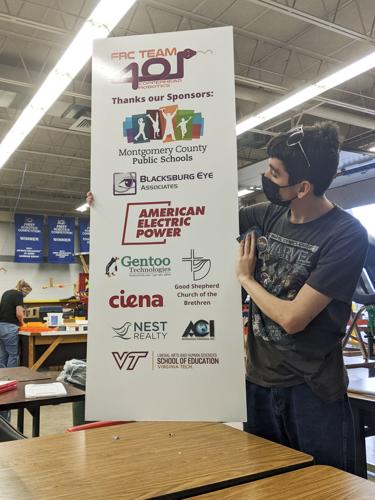 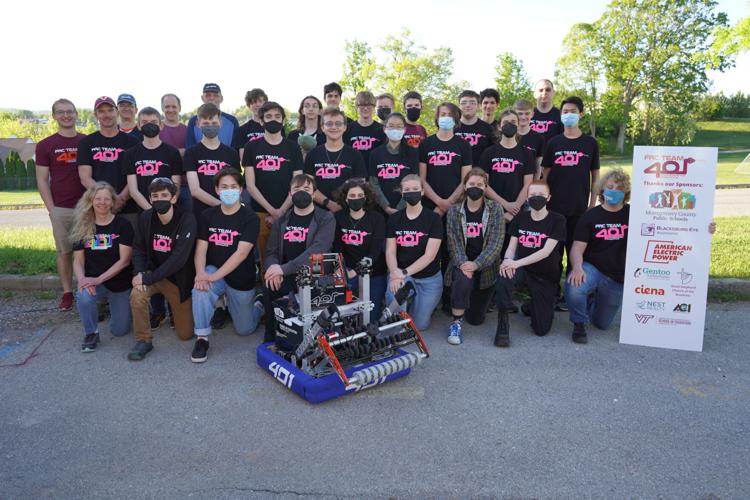 A team of Montgomery County students’ small but powerful robot and strong ties to the community recently earned them top state recognition.

Blacksburg’s team, comprised of students from both Christiansburg High School and Blacksburg High School, submitted their robot built for the FIRST Robotics Competition to VHSL judges April 30th and were then evaluated on their performance, among other criteria. The judges looked at five categories: mechanical design and construction, software and programming, project management, workplace readiness and responsible citizenship and competition and performance/achievements.

The VHSL championship originally began in the canceled 2019-20 season, where teams already competing in competitions like FRC could submit portfolios for professionals from across the nation to judge, and has since drawn submissions from teams throughout the state. To build their portfolio, teams are expected to keep detailed logs of all changes to their robot across programming and construction. The log should contain prototypes, design ideas, and detailed explanations about what knowledge and skills were gained in each iteration. Teams had to demonstrate long-term goals for their future projects as well as community outreach and budgeting.

The idea of a New River Valley robotics team began in 1999, and has since become well-established as FRC Team 401: Copperhead Robotics. Teams are numbered based on when they register, which makes Copperhead Robotics’ number a source of pride. As of 2022, team numbers surpassed 8,000.

In its current form, the 29-member Montgomery County team is mostly Blacksburg High School students, with roughly five Christiansburg High School students, but is open to all the NRV. They work together in the Christiansburg robotics lab, which is kitted out with a replica FRC field complete with all the necessary obstacles, a handful of work tables and stations, dozens of tools, 3D printers, and parts, their own banners displaying “Team 401” and a large, hanging, muscle-bound Hokie Bird.

Team members come from all grade levels, with five graduating seniors, but over half of these members are new. A lack of recruitment during the last two years of online learning shrank the team’s size, but this year’s influx has brought back numbers. The team is led by a combination of student leadership, teacher coaches, and alumni helpers. Responsibilities are split by function. Ayça Bulbul, 2022 grad, was this year’s team captain, and her co-leaders spoke highly of her when interviewed. Abby Lafor, rising junior, was design lead. In the workshop interview, she took pride in their robot, but continued to suggest ways to make it better.

Sullivan Dovie and Ash Coyle, both rising seniors, were head programmer/driver and outreach lead, respectively. Dovie drove the robot quickly and efficiently, speeding across the playing area to collect small foam balls. Coyle lit up when discussing their work with summer camps and local demos. Their previous coach, Nicholas Stoll, remains highly involved in the team after graduating in 2021 as the controls mentor.

The students receive support from their coaches, Karen Stoll and Michael Collver.

Team 401’s robot was comparatively smaller than others in the state competition. The FRC required robots to fall within a perimeter of 120 inches. Most teams made their robots to that limit, but Copperhead Robotics was about a quarter of the size. But their small size didn’t decrease their ability. The robot had a powerful shooting mechanism that marked them as a target to other robots during the second phase, getting knocked around by bigger ‘bots. Despite that, their accuracy and ability landed them shot after shot. For the third phase, the robot had telescoping arms with hooks to pull itself up the ladder quickly. In testing, the students placed a fall mat under their ladder just in case, but it wasn’t an issue. The robot handily made its way from rung to rung.

Over the course of the season, the team went to four competitions: two in Richmond, the Chesapeake Districts in Hampton, Virginia, and FRC Worlds in Houston. At their first Richmond competition they won the Chairman’s Award, the highest award teams can earn at a competition. At the second, they won 1st place overall with an undefeated record. At the Chesapeake District Championship, they made it to the semifinals and won 6th in the state, also gaining the Industrial Design award. At worlds, the team made it to the quarter finals on the Galileo field to wrap up the season.

Robotics is the VHSL’s newest official activity and is planned to go in-person next year.

Said Stoll: “We love all of it,” and “we cannot run without our sponsors.”

Their accomplishments function on the sponsorships and are the natural result of their passion for and time spent on their robots, and the devotion doesn’t stop. Even as students graduate — and some come back — the team has grown dramatically this year, and will continue to meet throughout the summer, taking their love for robotics to their community and preparing for next year’s season.

Roanoke College science center gets fundraising boost from past president

Roanoke College’s ninth president and first lady, David and Susan Gring, made the donation, bringing the school to $50 million out of $70 million raised for the construction of a new science center, an announcement said.

Most calls for artists come from museums and galleries. But last year, Section 179 of the American Welding Society put out a call to students,…

A federal planning grant is planting the seeds of healthy lifestyles in Roanoke City Public Schools and the local community.

Student costs are increasing this fall at Radford University due to declining enrollment and growing business expenses, according to universit…

A graduate of William Fleming High School in Roanoke, Janae Jones is excited to return to math in college, studying it as her major at Virginia Commonwealth University.

“Our country has had a rough time in the past couple of weeks. And our city is no different than that,” Police Chief Sam Roman said.

The school will be an extension of The Hughes Center, which is based in Danville and operates a residential treatment facility and day school in that city.

From left: Ash Coyle, outreach leader, and Abby Lafon, design leader, tinker with this year’s robot. Their sponsors’ names are displayed on its side.