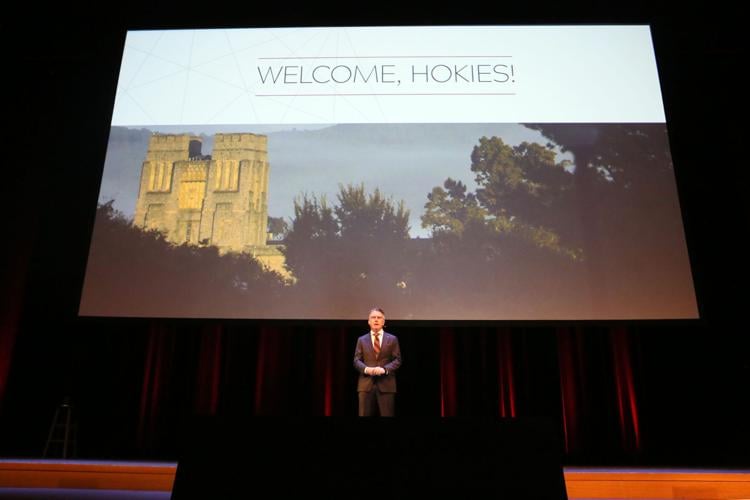 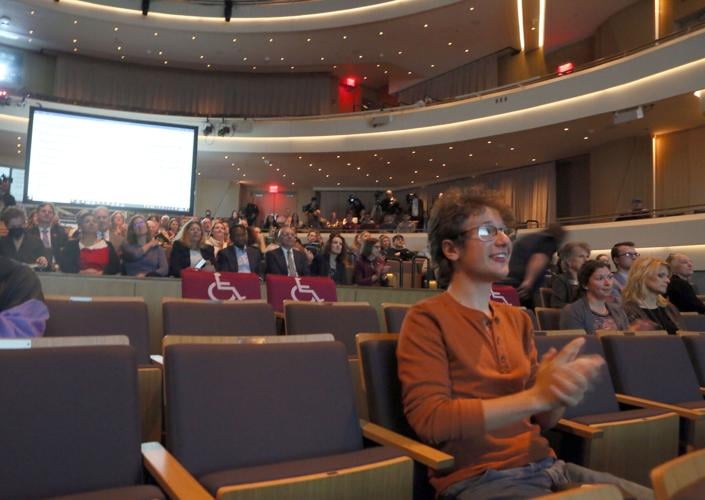 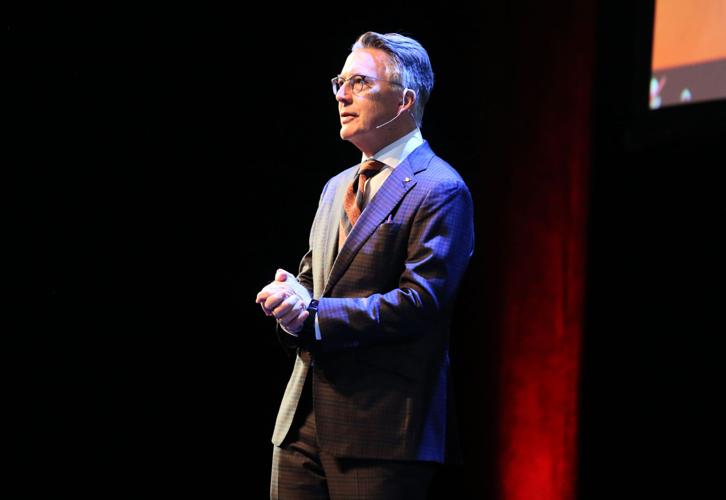 Virginia Tech president Tim Sands talked about university accomplishments and goals during his annual State of the University address Wednesday. 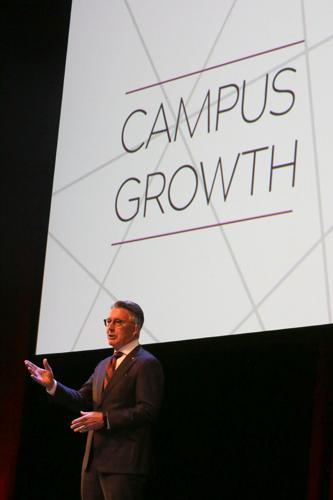 BLACKSBURG — Virginia Tech will revisit and refresh its plans and goals to better fit a post-pandemic context, said President Tim Sands during his 2023 State of the University address on Wednesday.

“The world around us has changed over the last three years,” Sands said. “We are taking this opportunity at the dawn of our next 150 years to update key performance indicators and reset milestones.”

Virginia Tech’s two primary aspirations are to become a top 100 global research university, and to make college education more accessible and affordable for students, especially for people from underrepresented backgrounds.

“We saw the impact of financial fragility during the pandemic,” Sands said. “A small unexpected expense is enough to make a student interrupt their education or leave the university entirely.”

Land grant universities should be a positive force for upward economic and social mobility, not just an engine for propagating wealth and opportunity from generation to generation, he said.

“While we have been successful in increasing access, with over 40% of our entering undergraduate class identifying as first-generation, low-income, veteran, or underrepresented minority, we know that many students among these populations do not have the full experience of being a Hokie,” Sands said. “And it’s not just about financial aid. Our students need support in the form of advising, mentoring and engagement.”

But also, more financial aid is needed for students — between $25 million to $45 million annually, he said.

Virginia Tech achieved an enrollment goal of 30,000 students in 2019, and has since held its population steady at that number, to assess and develop capacity for further growth on campus, Sands said.

“Applications for undergraduate admissions increased 65% over the last five years, and this week we surpassed last year’s record for the fall of 2023,” Sands said. “The demand for the Virginia Tech experience is robust and momentum continues to build.”

That increase in applicants, paired with holding the student body at 30,000 enrolled, has led to side effects.

“As we assess the need for growth to best serve the commonwealth, we’re upgrading and expanding our campus infrastructure to support our teaching and research mission,” Sands said. “Projects currently underway or planned for the near future do not fully address the need for additional residential space on campus.”

A historical Virginia Tech acceptance rate of 70% has dropped to 57%, and is likely to drop more unless the school can support more students, Sands said. Becoming increasingly selective runs counter to the access issue that is a top university priority.

“I would rather fulfill our role as a land-grant institution by growing to accommodate all prepared Virginia students who really want to attend Virginia Tech,” Sands said. “If we don’t, many of them will leave the commonwealth and we’ll lose their talent and future contributions to other states.”

As for becoming a top 100 research university, that goal is meant as an indicator of excellence and competitiveness with other colleges, he said. Increasing emphasis on research is also part of serving the state of Virginia, providing solutions to tough problems.

“Extramural research expenditures were impacted by the pandemic, but are rebounding nicely here, up 13% during the first half of 2022, and up a total of 24 percent since 2017,” Sands said. “Today, in 2023, we are fulfilling our commitment to the commonwealth, and we are on the path to becoming a top 100 global research university.”

One significant growth in research at Virginia Tech has occurred through universitywide investment in biomedical research, including at institutes that are a part of Virginia Tech Carilion in Roanoke, he said.

“We’re also working with our partner Carilion Clinic to address the coming shortage of physicians in Virginia,” Sands said. “This year, with support from the commonwealth, we hope to begin planning for the expansion of the Virginia Tech Carilion School of Medicine.”

Other topics covered by Sands during his address included freedom of speech, expansion efforts outside of Blacksburg, brief interviews with various campus figures, and the school’s 150th anniversary celebration in 2022.

He brought others on stage during the address, both in-person and digitally via a 25-foot projector screen behind him on the dark-lit stage.

Sands appeared after an introduction from student leaders, and behind a drumline performance by the Virginia Tech Highty-Tighties cadet marching band.

“2023 will bring exiting opportunities, new challenges, and important work for all of us,” Sands said. “I have great confidence in our success, and our future, because of you and the entire Hokie Nation.”

Update: More on reaction to Mark Miear opening up about Montgomery County firing

Miear, who spent just over six years as MCPS chief, said his dismissal — which the school board unanimously approved on March 17 last year — was rooted to his objection to his transgender child’s decision to change their name.

"Our goal is to introduce students to the variety of differences in human form, abilities, and expressions of personhood," said an assistant professor.

At Virginia Tech, research is turning food scraps to bioplastic

It's using one problem to solve another.

While Title IX is tool, politicians continue to make it more of a challenge by altering it depending on who is in office, those involved say.

Bragen begins his Montgomery County tenure with nearly a decade of leadership experience in New Jersey.

Virginia Tech president Tim Sands talked about university accomplishments and goals during his annual State of the University address Wednesday.