SCHEV member resigns over VMI investigation, saying agency is 'turning its back' on institute
25 comments
Share this
{{featured_button_text}}
1 of 2 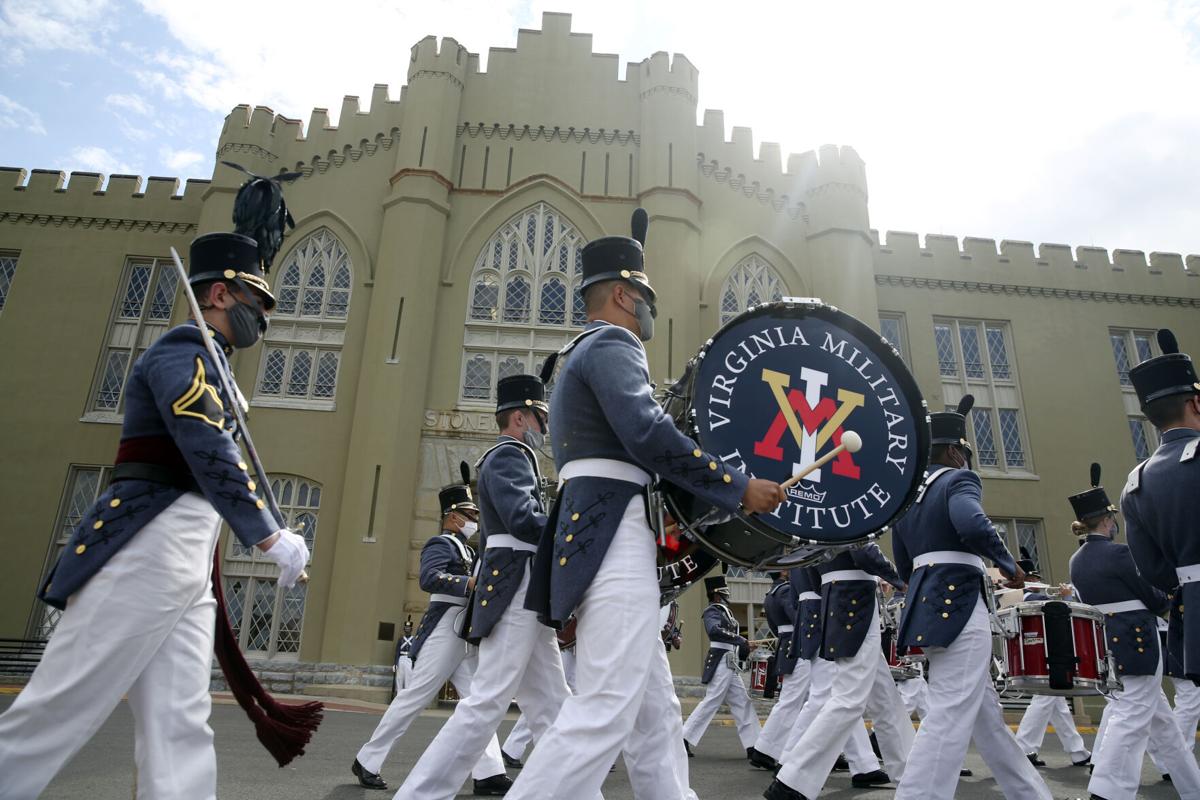 Virginia Military Institute cadets leave the barracks while participating in the annual parade at the end of the school year in Lexington on May 14, 2021. 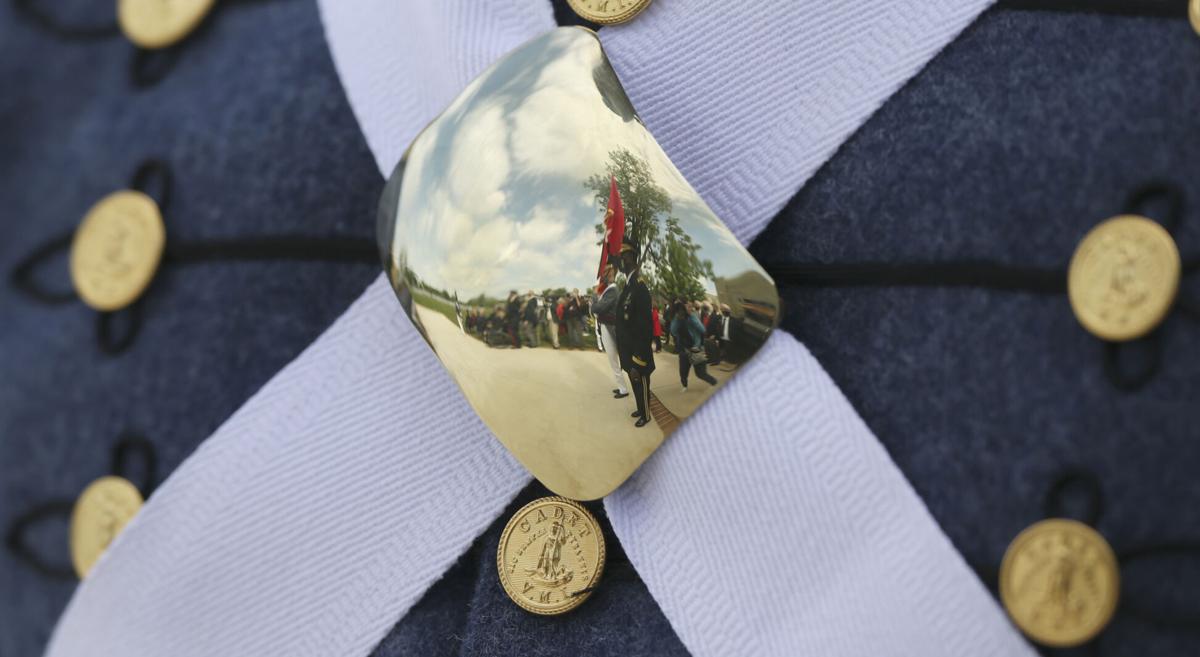 The vice chair of the State Council of Higher Education for Virginia resigned Tuesday in protest over the handling of the independent investigation into Virginia Military Institute.

Tom Slater, a 1966 VMI graduate and attorney at top Richmond law firm Hunton Andrews Kurth, told council members at its meeting that he was “disappointed” that Maj. Gen. Cedric T. Wins, superintendent of VMI, is not being offered the opportunity to meet with the law firm investigating the college and the state council to discuss the findings and recommendations prior to the report being made public. His public announcement pulled back the curtains on a private dispute among the parties and VMI’s complaints about how the law firm has been conducting the investigation in its final weeks.

“SCHEV should be lending its hand to this fine man, not turning its back on him,” Slater said.

The independent investigation into the state-funded military college began four months ago following allegations of racism. So far, an interim report published in March documented responses from alumni, current cadets and faculty about them witnessing or experiencing racism and sexism. The final report, which will include recommendations, is expected to be released in the coming weeks.

“I can think of no instance where an audit has been performed and recommendations made where the investigative body does not meet and confer with the college’s leadership to make certain that the proposed recommendations make sense, are not punitive, and would advance the mission of the particular college and the commonwealth before that report is released to the public,” Slater said.

Slater was appointed to the VMI board of visitors in 2003, and he served as the body’s president from 2008 to 2011. He’s currently a member of the Virginia Military Institute Foundation Endowment Campaign Committee. He also served on the superintendent search committee that chose Wins to become the first Black superintendent of the college.

Slater’s term with the state’s coordinating agency for higher education was scheduled to end in 2024. Gov. Ralph Northam appoints the members to the council, and he had a friendly relationship with Slater.

“Governor Northam is grateful for Mr. Slater’s service and wishes him well,” Northam spokeswoman Alena Yarmosky wrote in an email.

SCHEV awarded a contract to investigate VMI’s “complex culture, policies, practices, and traditions” to national law firm Barnes & Thornburg. The state provided up to $1 million for the investigation.

“I am very confident that SCHEV will be supportive of VMI once the report is released and we’ve had the opportunity to consider those recommendations based on the independent findings that come through this investigation,” Council Chairwoman Marge Connelly said in response to Slater announcing his resignation.

VMI spokesman Bill Wyatt said Tuesday that at the first meeting between Barnes & Thornburg in January, investigators said they would share their findings and recommendations prior to the publication of the report. Several weeks later, the lead investigator said that would no longer be the case, Wyatt said. The Barnes & Thornburg team has interviewed Wins twice for several hours, and Wins asked at those meetings to review the final report’s findings.

“Regardless of whether VMI gets to see the findings and recommendations prior to publication, VMI continues to build on the progress made over the past several years on issues of diversity, equity and inclusion,” Wyatt said in an email. “Our hope is that the report is objective and factual while providing useful recommendations that VMI can act upon and are based on best practices within the higher education and military environments.” 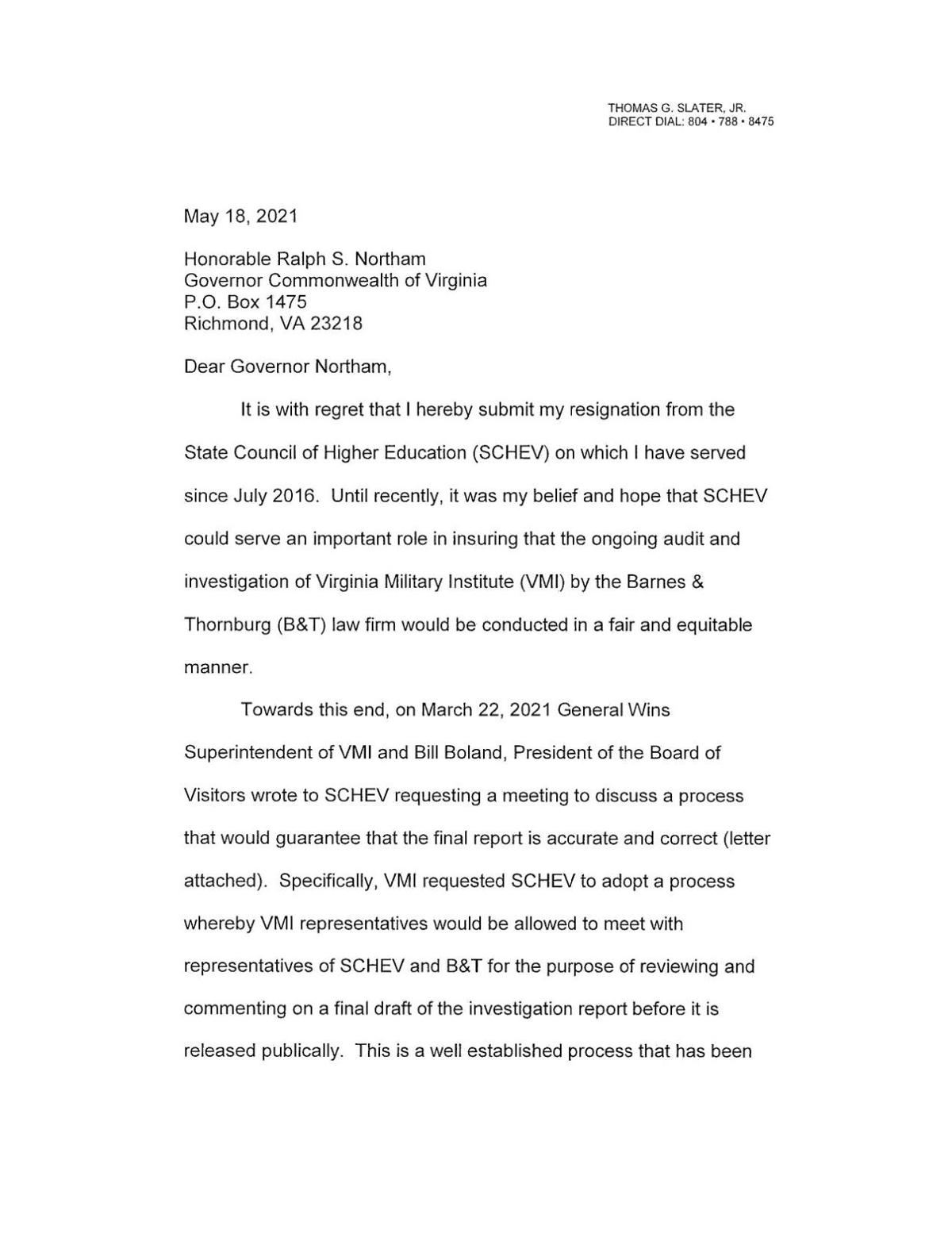 Wins and board of visitors President John “Bill” Boland wrote to the state council March 22 with concerns and asked that the council “provide additional oversight of the investigation to ensure its integrity and compliance” with the terms set out for the purpose of the investigation. For instance, they said the law firm incorrectly depicted in progress reports that VMI has not cooperated with the interview process with cadets and didn’t supply documents. They also said an online survey used biased questions with negative wording that would be “purposely prejudicial to VMI.”

They also wrote that one report included “misleading and sensationalized observations” and questioned the law firm describing it as a “common experience” to hear racial slurs on VMI’s campus when it cited eight instances in the span of 25 years. The VMI leaders pointed out that during that time, the college investigated and disciplined students for using racial slurs, but the report doesn’t make clear if the anecdotes listed in the report were new or overlapped with those incidents.

Because of these concerns, Wins and Boland told SCHEV they believe VMI should have the opportunity to review for accuracy and comment on each of the investigative team’s reports before they are publicly released.

“Most concerning — if the final report is to have any legitimacy or lasting value to VMI and the broader academic community — such distortions and incomplete reporting cannot be allowed to exist in the final volume to be delivered by the B&T team in June 2021,” they wrote.

They also argued that while the law firm should be involved in developing recommendations, the state council and VMI leaders should participate in that process.

“We respectfully submit that lawyers, no matter how well intentioned, should be not making education policy for Virginia’s institutions of higher education,” the letter states. “Certainly not lawyers lacking experience and training in the nuances of the Commonwealth’s state-supported military institution.”

Connelly wrote in a response on April 13 that she consulted with SCHEV Executive Director Peter Blake about the concerns Wins outlined and concluded that Barnes & Thornburg was operating within the parameters of the contract and additional oversight from the council was not needed.

Slater wrote a letter to the council that same day backing VMI’s request that it get the chance to review the findings and recommendations before the report is released and urged SCHEV to meet with VMI leaders. On May 5, VMI again asked for a meeting with the council.

“The serious nature of the allegations against VMI, and the far-reaching implications for all institutions under SCHEV’s umbrella, warrant a meeting to discuss B&T’s recommendations in advance of public discourse,” Wins and Boland wrote.

In a May 13 letter, the investigative team for Barnes & Thornburg responded to the VMI letters to defend its methods. It also pushed back against VMI, saying it continues to be slow in producing documents, and several key senior administrators have declined interviews and others have refused to discuss certain topics.

The law firm also said it has been clear from the beginning with SCHEV and VMI that it wouldn’t meet with VMI to preview findings or recommendations before the reports were finalized.

“While we are willing to meet with VMI, we cannot agree to share our draft findings with VMI, the subject of the inquiry, particularly where VMI has stated that the purpose of that meeting would be to influence our findings before they become final,” the team wrote.

Connelly’s final written communication on the matter came that same day, when she rejected a meeting with VMI leaders prior to the release of the report, saying it “could have a negative impact on the independence or appearance of independence of the final report.”

In his resignation later, Slater wrote that, until recently, he had hoped the investigation would be conducted fairly and that a meeting between the law firm, VMI and SCHEV to develop a process to review the findings and recommendations would lend credibility to the final report.

“I can only conclude that the current Chair and Executive Director have decided to bow to political pressure from your office and the attorney general’s office to insure that the final report by B&T supports the unfounded charges in your letter of Oct. 19, 2020 accusing VMI of systemic racism,” Slater wrote. “In view of this, I cannot in good conscience continue to serve on SCHEV.”

The investigation into VMI has been particularly divisive, with VMI’s defenders — especially the college’s alumni — arguing that Northam, a 1981 VMI graduate, rushed to judge the college and forced out the previous superintendent before the investigation he ordered even began. Critics pointed out that Northam hit the brakes on his own scandal two years ago when a racist photo was revealed to be in his 1984 medical school yearbook and Democrats in Virginia and across the country called for his resignation. Slater rallied behind him during the scandal.

The college has made progress since the start of the investigation. It removed the statue of Confederate Lt. Gen. Thomas “Stonewall” Jackson from campus in December. Jackson’s name is being removed from campus buildings. The college also began making changes before media reports about racism allegations and the state’s involvement, including ending the practice a few years ago of making cadets salute the Jackson statue.

“If there are things we’ve got to work on, we’re going to work on them,” Wins said in an interview last week. “We’ve already begun working on things. There’s already been a significant amount of change in a number of areas.”

The word “maroon” has many meanings – a burgundy color or to be left alone in an isolated location like an island.

Montgomery County isn’t alone on the matter as the still ongoing challenges of the pandemic has led to school staffing shortages elsewhere in the region.

Virginia Military Institute cadets leave the barracks while participating in the annual parade at the end of the school year in Lexington on May 14, 2021.