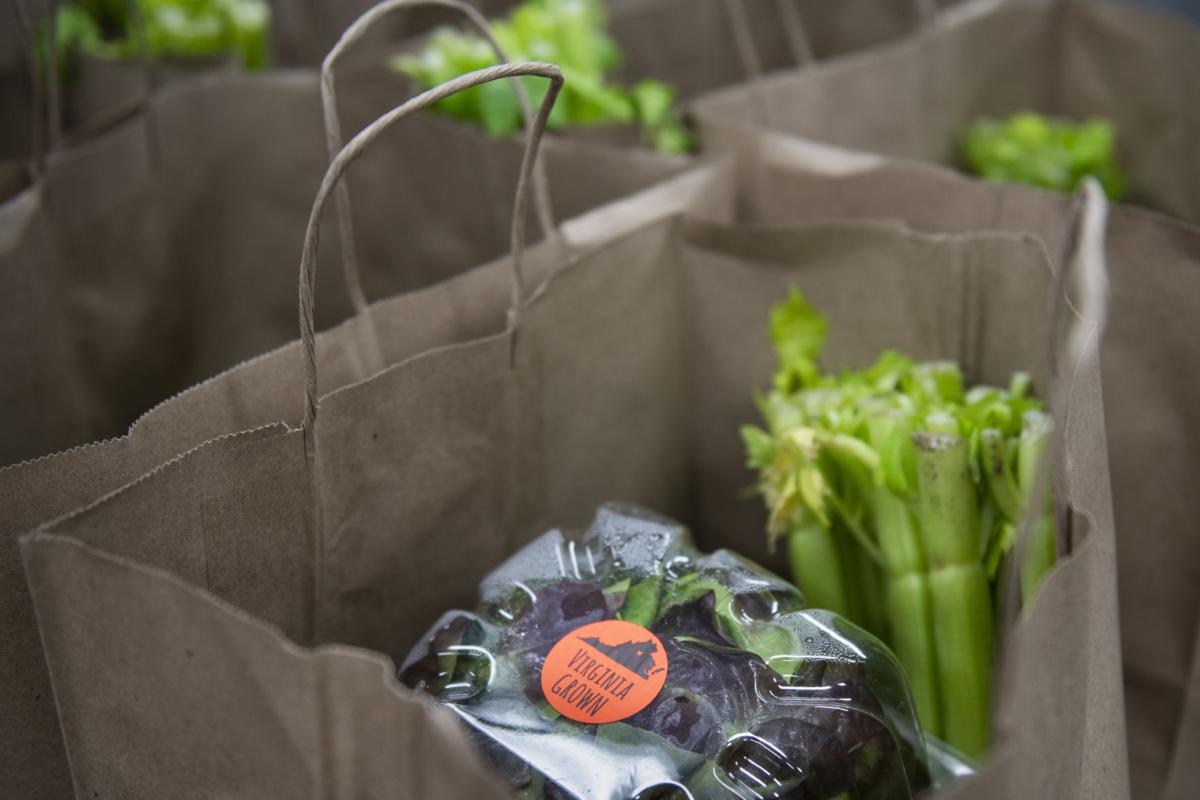 The contents of a food bag are seen prior to its distribution. 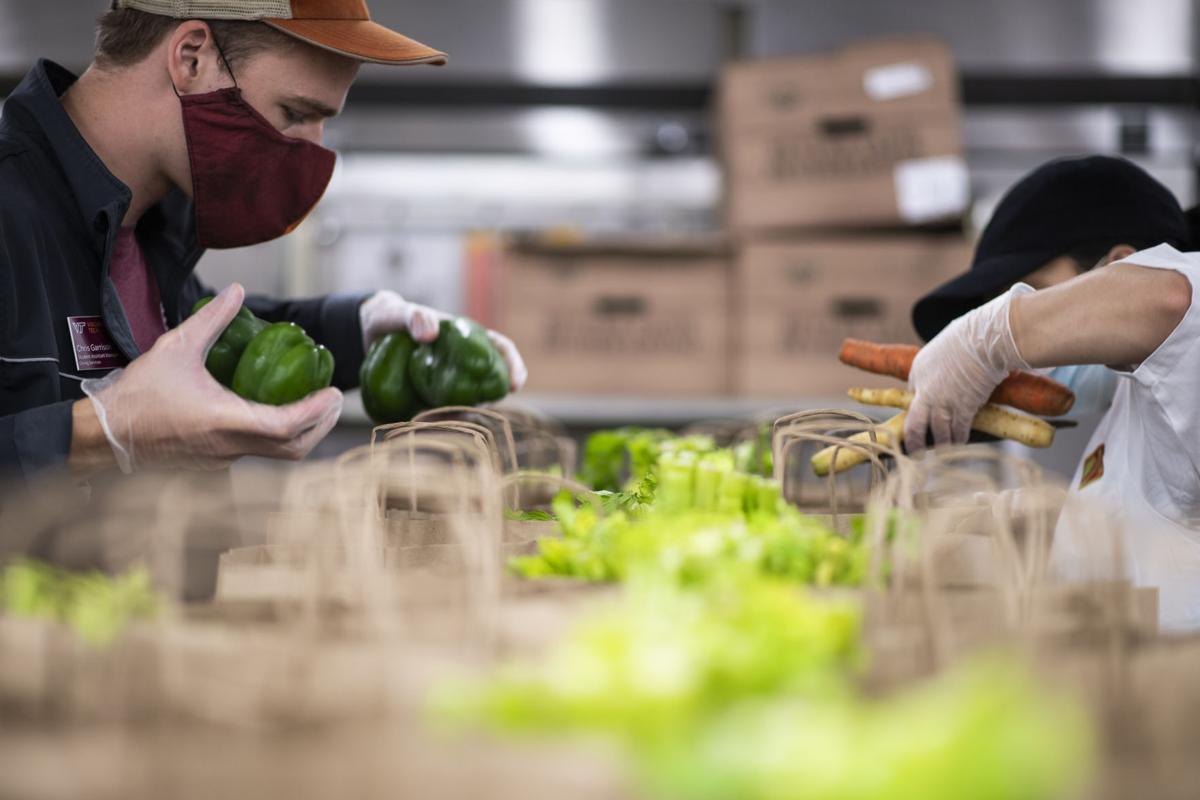 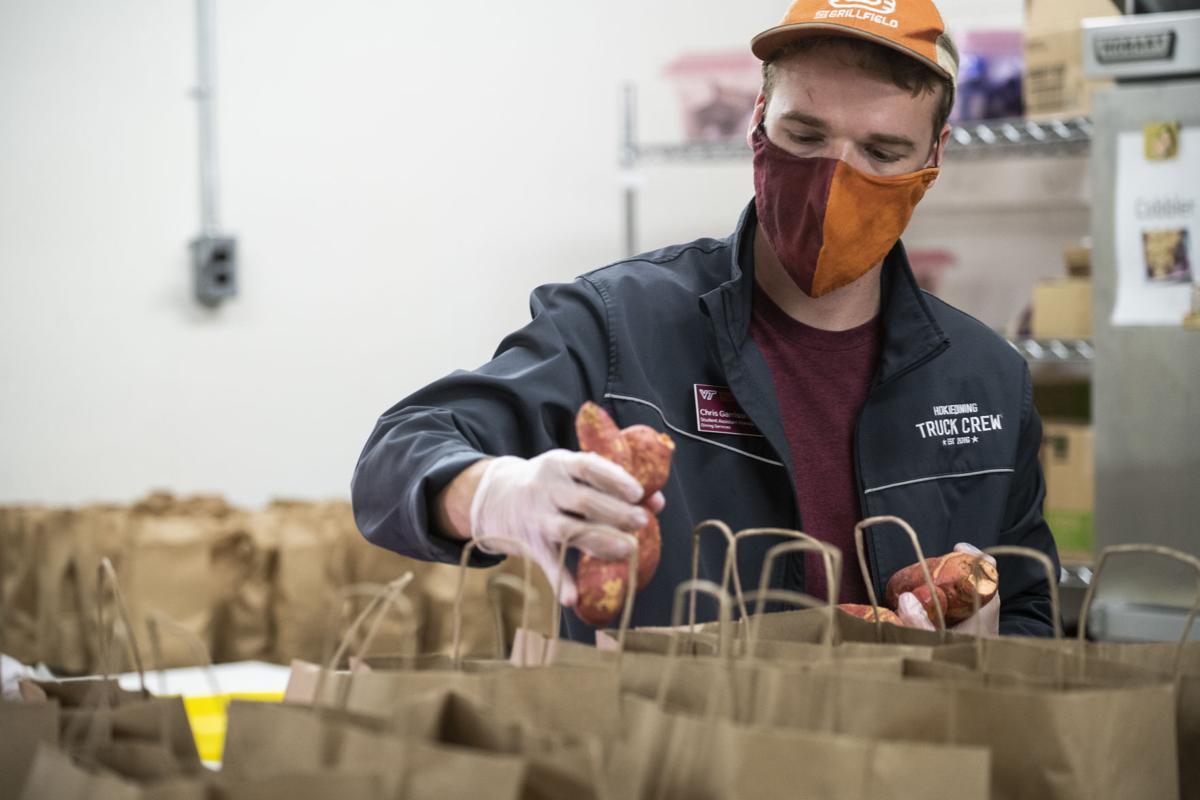 Chris Garrison helps put together food bags for distribution at the Graduate Life Center in Blacksburg. 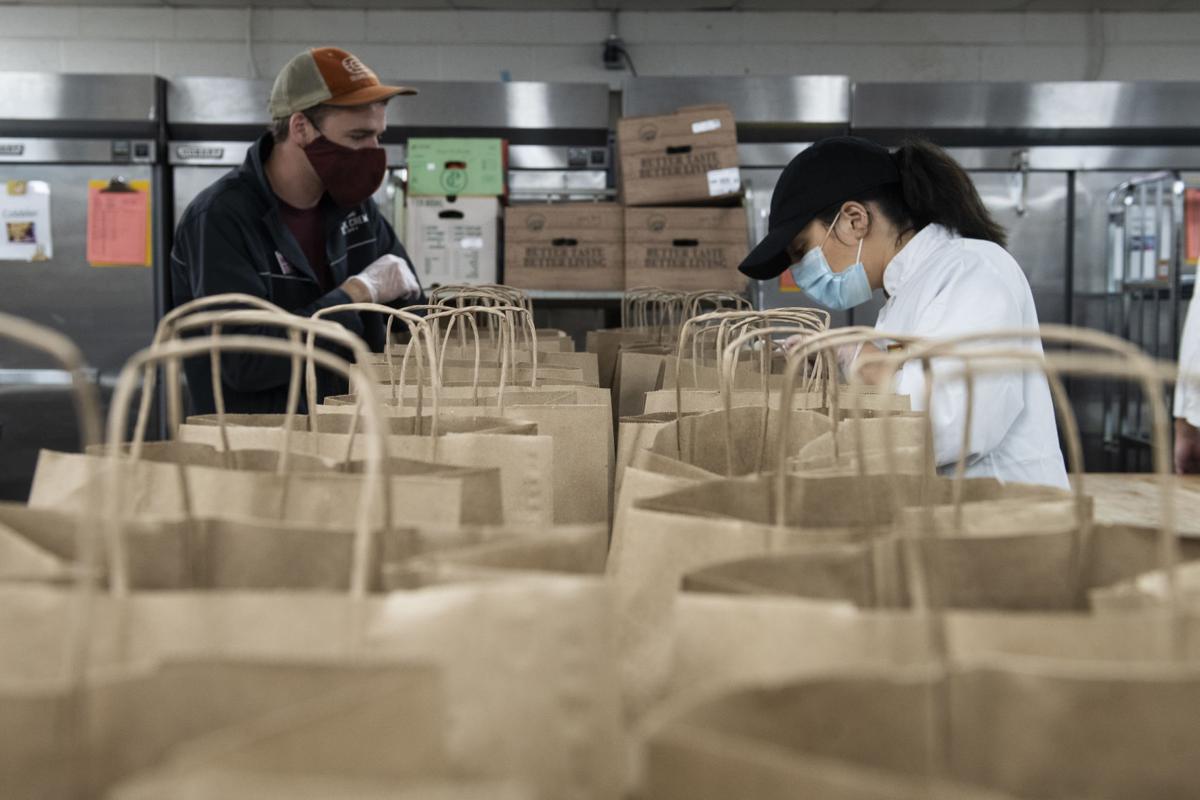 Wednesday, Sept. 30, 9:56 a.m.: The new meals program at Virginia Tech can serve up to 75 students weekly. The Food Access For Students GoFundMe program raised $36,458, and is considering donating $10,000 worth of grocery cards to the university's Dean of Students Office. An earlier version of this story contained incorrect information. The story has been updated.

BLACKSBURG — Mackenzie Roach lost her job at Virginia Tech’s gym when the coronavirus pandemic forced the university to shutter in the spring.

“I’m kind of living off-campus, balancing bills with not having my job anymore, and still trying to kind of survive,” said Roach, a 21-year-old chemical engineering student.

When Roach reached out to the Dean of Students Office for an emergency grant, the university offered an extra lifeline: Would she be interested in being part of a pilot meal-kit program along the lines of Blue Apron and HelloFresh?

Called The Market of Virginia Tech, the program unveiled Wednesday will serve up to 75 students weekly with weekly packages of fresh produce and either vegetarian, poultry or beef protein options. Participants can order their meal kits online, and pick them up at the Graduate Life Center in Blacksburg. Tech says the kits provide enough food for about a week’s worth of meals.

The inspiration for a new breed of food bank came even before the pandemic unraveled the economy.

A 2019 study from a Tech professor found that 29% of undergraduates and 35% of graduate students on campus experience low or very low food security, a rate on par with other colleges.

Mehul and Hema Sanghani, who met as undergraduates at Tech, had been interested in focusing some of their philanthropy around issues of hunger and food insecurity.

In August 2019, the couple celebrated their anniversary by visiting The Store, a free grocery in Nashville, Tennessee, to learn about how it worked and about different food pantry concepts.

“The numbers were pretty staggering to us,” Hema Sanghani said in a Zoom interview Tuesday about the Tech study. Recent data from other studies show how widespread hunger is in America.

“These numbers were provided prior to the pandemic, so we can only imagine that we will see an increase in those numbers, if we haven’t already,” she said.

While the couple said they never personally struggled with food insecurity, both grew up with parents who had immigrated from India and experienced challenges in their new country.

“In elementary school growing up I had a number of friends that were part of the free lunch program,” said Mehul Sanghani, a member of Tech’s Board of Visitors, who while growing up helped clean a Red Carpet Inn motel his parents ran in Blacksburg.

“There are a lot of jokes about cafeteria foods, but I watched these kids devour those lunches because it might represent the only meal that they would get that day.”

Frank Shushok, vice president for student affairs at Tech, said the goal for The Market is to provide a sustainable model to address hunger on campus, in addition to existing local and college food pantries.

“I think all of these are needed, but I think this is a unique and different approach that adds to the many components that are needed to address food insecurity in our community,” he said.

Mantha on Tuesday said the campaign, Food Access for Students, has helped 128 students. The campaign has raised $36,458 as both he and Steele are wrapping up their studies at Tech.

Mantha said he’s hoping to donate $10,000 worth of remaining gift cards to the Dean of Students Office for The Market program. Gift cards may be of particular use for some students this semester after classes switch to remote learning after Thanksgiving break.

“So we all could work toward the same goal, which is to serve students in need,” Mantha said. “I think it is a wonderful program, the way it is designed.”

Mehul Sanghani said the initial vision was to have an in-person market. The pandemic threw a wrench in that concept. He noted that the Marketplace, with online ordering and a weekly pick-up, is “highly supportive of not only social distancing, but it also offers a greater degree of anonymity and dignity,” which he said is a “unique hallmark of this effort.”

For Roach, the engineering student, the continuation of the weekly meal kits into the fall semester “would help me out immensely.” She lives off-campus with her sister, a sophomore, and has been able to expand her culinary horizons recently with a Mediterranean chicken shawarma dish.

Roach said she hopes her story can inspire others to seek help.

“I know students that may be in this position are a little ashamed and maybe don’t want to shine the spotlight on them or the situation.” Roach said. “So sharing my story, hopefully if that brings awareness to the resources, or just to help them feel that they’re not alone and that it’s okay, especially right now … that it’s okay, and that there’s people to help.”

Donors can support The Market at https://apps.es.vt.edu/onlinegiving/gift?fund=877961.

Ever thought about hosting a foreign-exchange student? That endeavor can be rewarding for the student, the host family and — in the long term — for the nation.

The board also named a director of equity and engagement, a new position.

Virginia, school districts say no, so parents staging their own proms for high schools in Henry, Patrick counties -- out of state

Virginia pandemic restrictions make it impossible to hold a traditional state prom -- so parents are crossing the state line to do it themselves.

In a first, a woman will be VMI's highest-ranking cadet

Cadet Kasey Meredith will assume her role as regimental commander in May.

Butzer to resign from Roanoke County School Board

Chairman Don Butzer is moving to Northern Virginia is June, necessitating his resignation.

Tech will confer degrees at an online university-wide commencement May 14. But across seven days, the university will host college-specific graduations to allow students and family members a chance to celebrate on campus.

The contents of a food bag are seen prior to its distribution.

Chris Garrison helps put together food bags for distribution at the Graduate Life Center in Blacksburg.