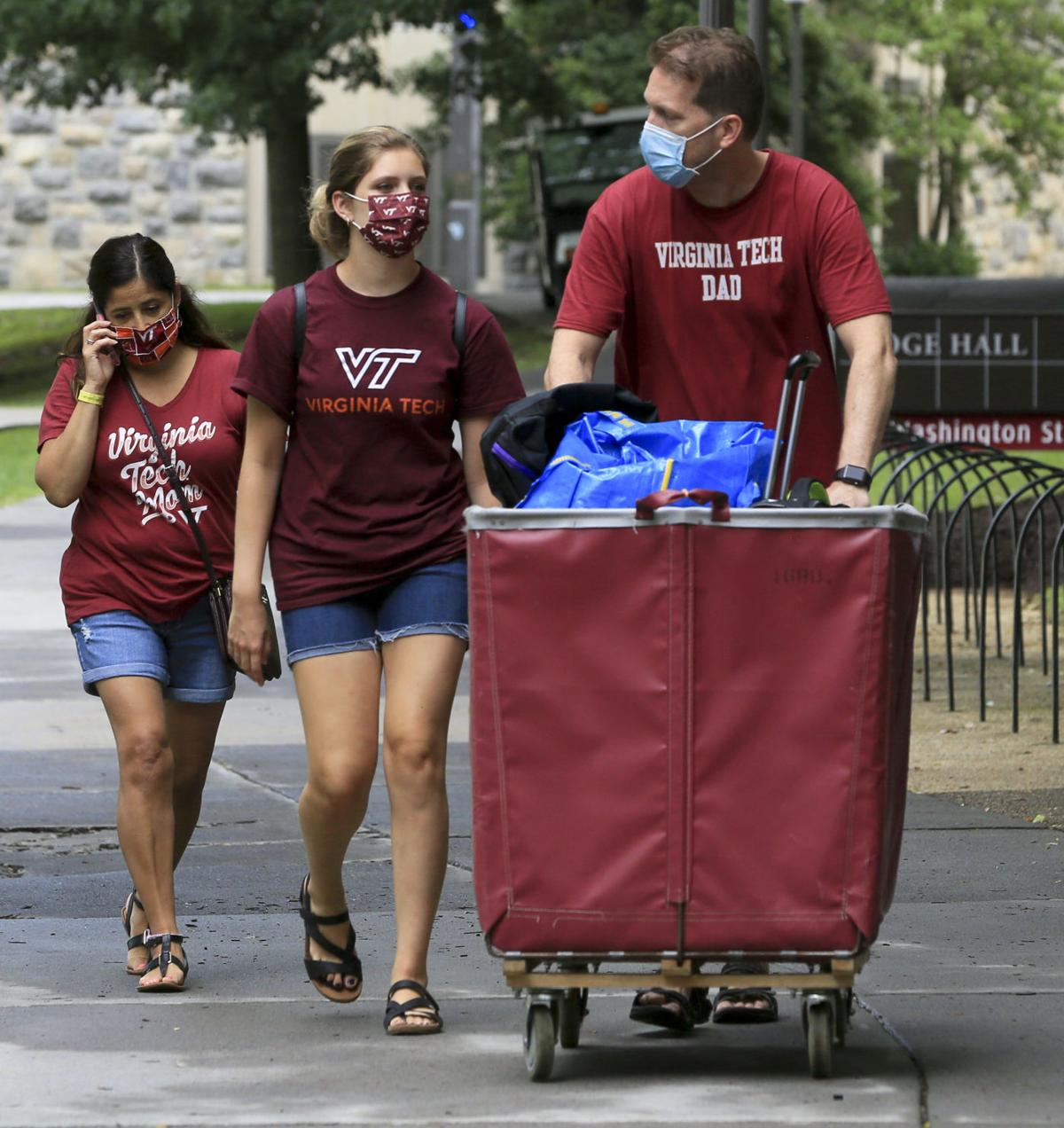 Incoming freshman Samantha Turner (center) of Long Island, New York, had help moving in from her parents Michelle and Rob. Check-in this year will be spread over 10 days. 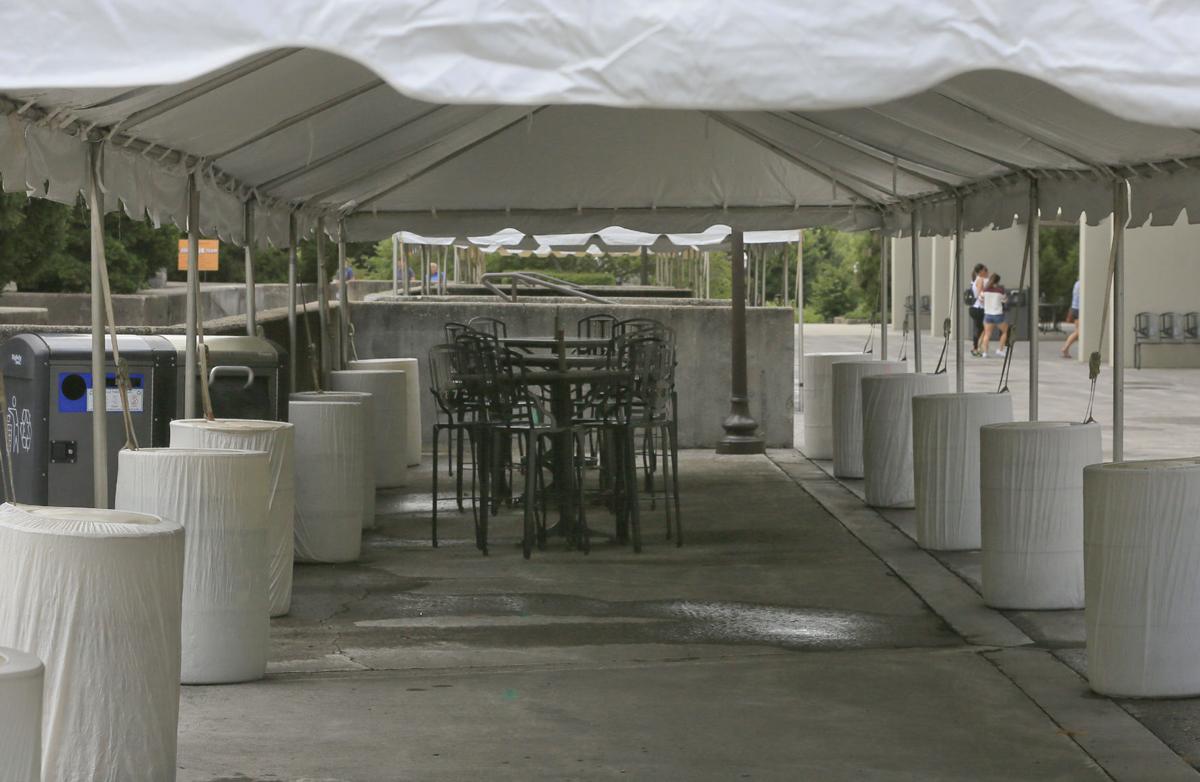 The university has added tent structures in an effort to make outdoor spaces more usable. 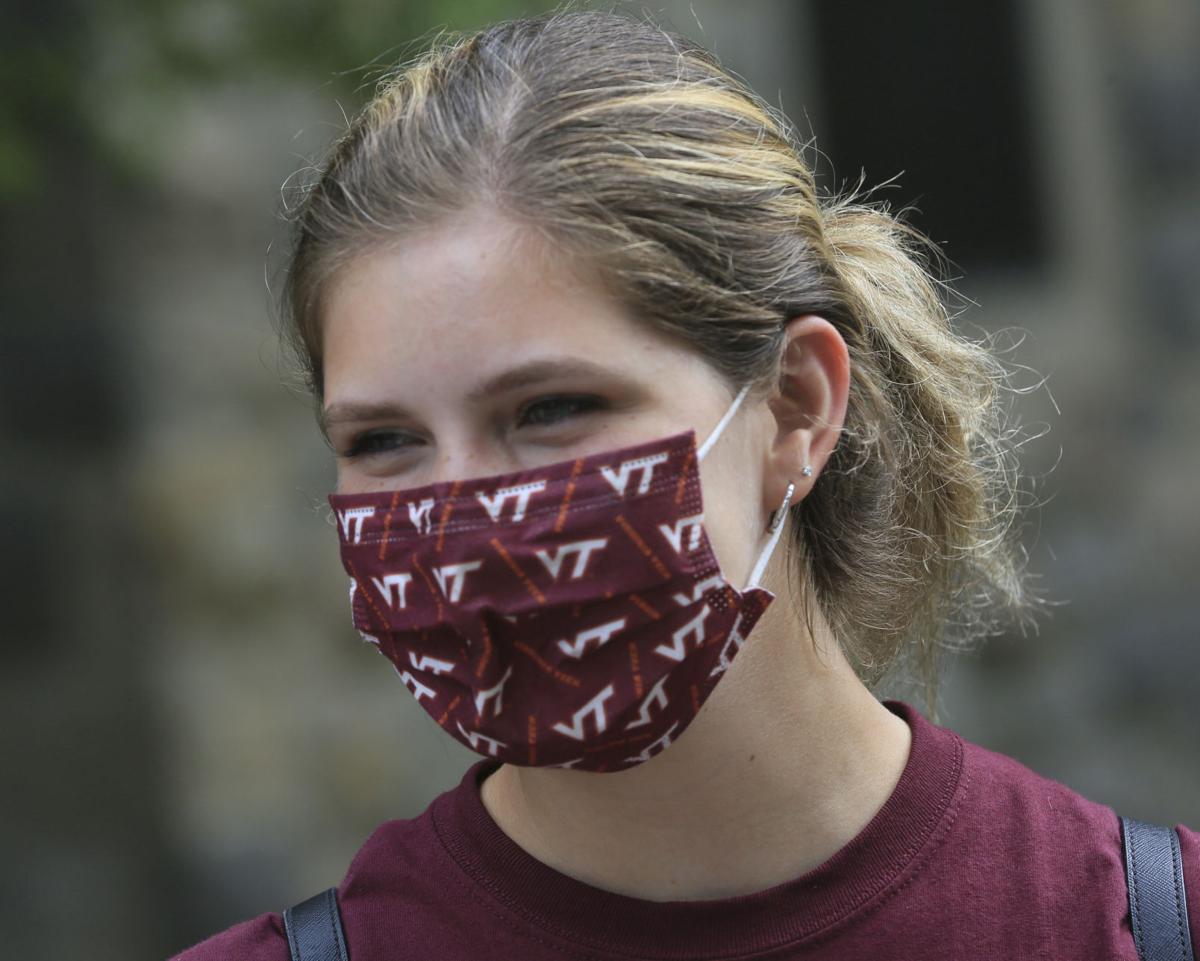 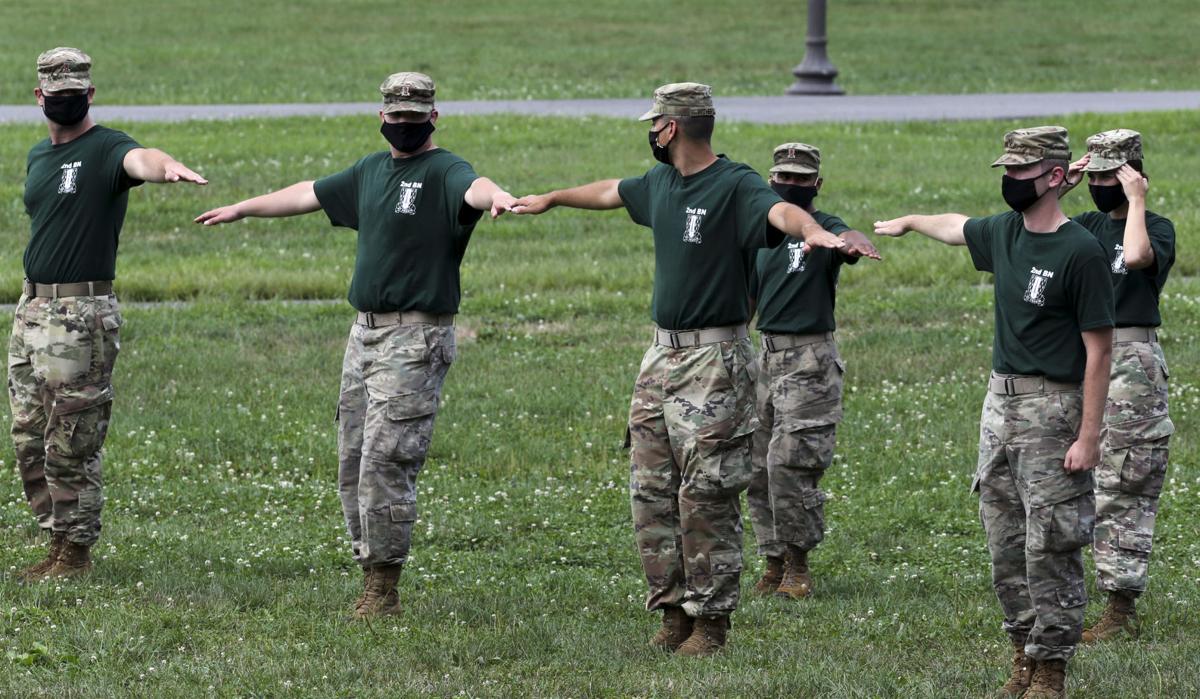 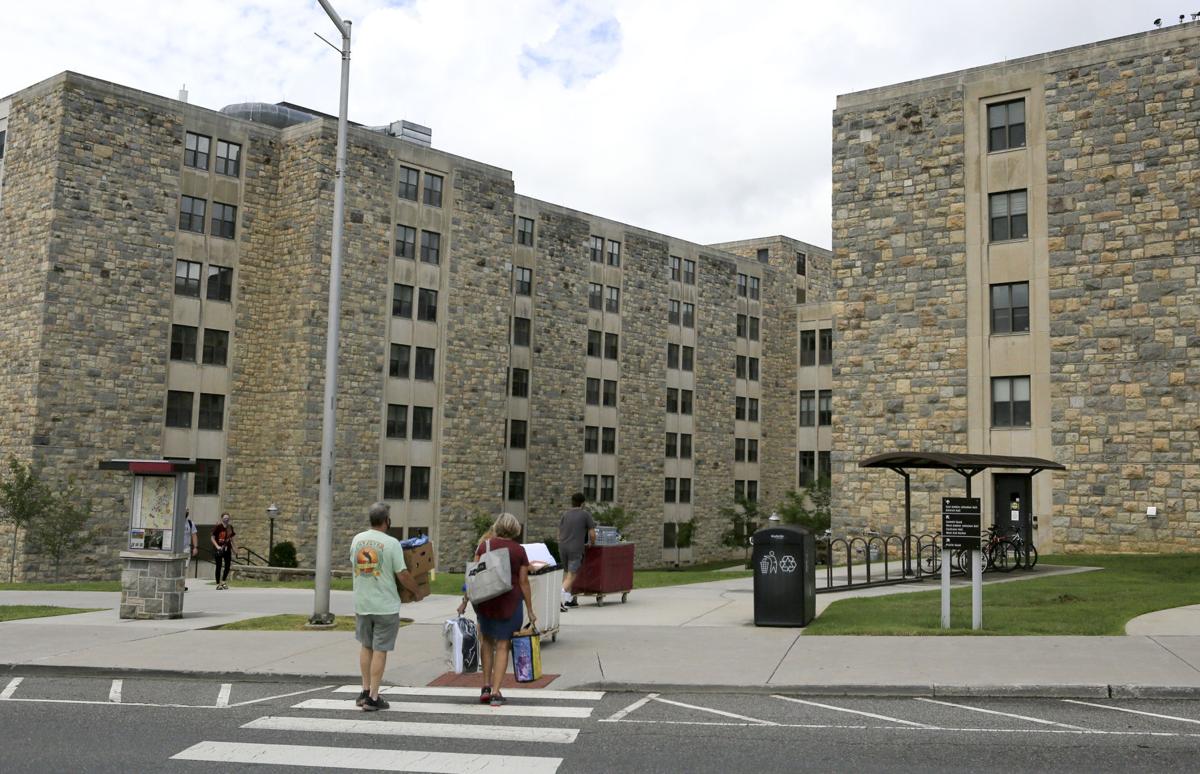 Friday was the first day of Virginia Tech student move-in. 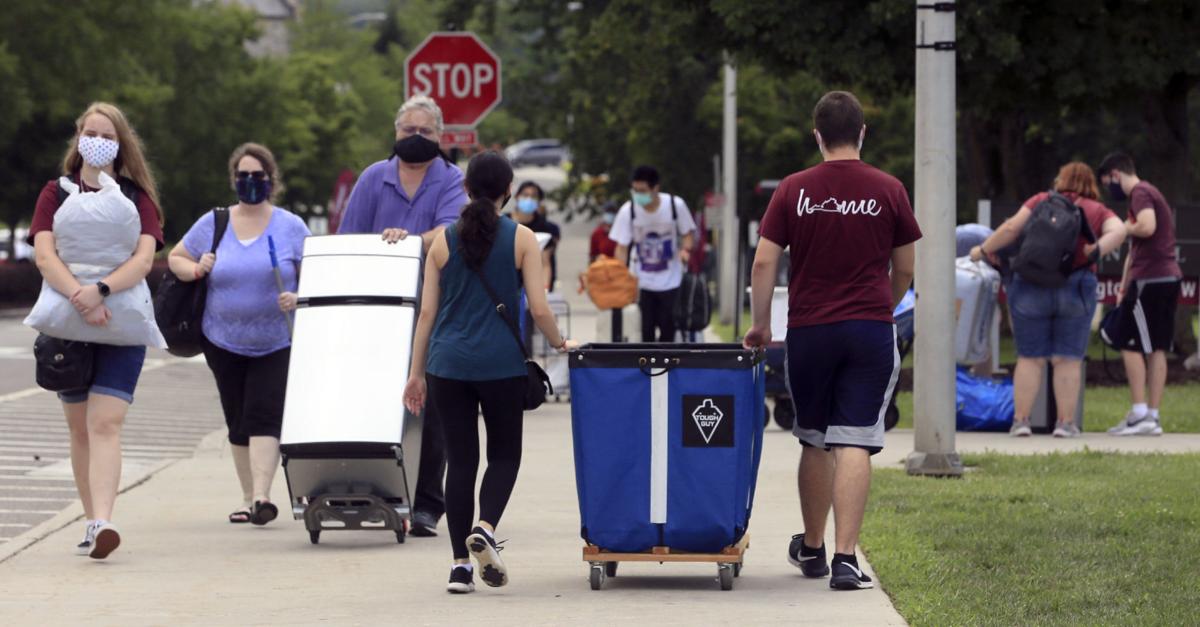 BLACKSBURG — Parents pushed cartloads of mattress pads and mirrors up sidewalks as their children lugged fans and toiletries.

“This is the experience,” one mother shrugged of the college move-in process, but “with a mask.”

Virginia Tech students began trickling onto campus on Friday, the first day of a move-in process spread over 10 days to reduce congestion that could quicken the spread of COVID-19.

Nearly every student and family member spotted wore face coverings mid-morning and mid-afternoon as they moved in. Tech’s mix of in-person and online classes will begin Aug. 24 after months of plans and investments that have reconfigured classrooms, dining halls and dorms.

“Anyone who is working in education right now is worried about making the very best choices possible,” Frank Shushok, vice president for student affairs, said Friday, standing outside a blue “Hokie Helper” tent, where volunteers gave directions and passed out water.

Students told him how important it was to them to have a residential fall, Shushok said, with the first day of move-in uncertain until it arrived.

“It’s just like everything else these days; you just put one foot in front of the other.”

About 800 students were expected to move into residence halls on Friday, Shushok said, with a similar number over subsequent days. Normally, he said, 3,000 or more students would arrive daily in a span of about three days.

“After months of preparation and a great deal of hard work and planning, the time we’ve all been anticipating is finally here – our Hokie community is coming back together,” President Tim Sands said in a statement. “Being together will be different this year, and while some employees and students will continue to connect remotely this semester, our campus will be more active as we find creative ways to live, work, and play under current public health guidelines.”

Tech is requiring all students living in university housing to get a COVID-19 test during their two-hour move-in slot. Tests are taking place in Lane Stadium. (The university did not allow media access to the clinic, citing medical privacy, and provided photos and videos afterward.)

The university will analyze the tests itself, thanks to a lab it established in April to assist local health departments with sampling. Located in Roanoke at the Fralin Biomedical Research Institute, the lab expects to process up to 1,000 tests daily, with results ready within 24 hours.

The lab will get a $500,000 grant to continue testing over 12 months and start an internship program, the state announced on Thursday.

While about two-thirds of Tech students live off-campus, the university expects about 8,600 to move into university housing over the next 10 days. Normally, 10,000 students would live in dorms.

Although Tech has said it anticipated 9,100 students in campus housing, Provost Cyril Clarke told members of the board of visitors on Thursday that more prospective students are opting not to enroll, a phenomenon known as “melt.”

“So we have overall student melt ... which is normal,” Clarke said. “It’s a little high this year due to the circumstances.”

While the university as of Tuesday had 6,728 freshmen enrolled, Tech projects that number to fall slightly below its goal of 6,675 when a census is taken in September.

The number of international students enrolled at Tech especially has taken a hit.

As of Tuesday, 129 international freshmen were enrolled, compared to a goal of 437, according to Clarke.

“We’re going to be pretty close, therefore, in terms of our headcount goal, but I know the board appreciates that the lower count of out-of-state students, due in particular to the enrollment of international students, will have financial consequences,” he said.

While most classes this semester are either online or a mix of online and in-person, several students and parents expressed relief Friday at being in Blacksburg.

Chloe DeSanto, a freshman from Richmond, said she was excited to finally be on campus.

“I didn’t think it was going to happen for a while,” DeSanto, 18, said. “I thought they were just going to call it off.”

While all her classes this semester will be online — which she admits is “not great” — DeSanto said she’s looking forward to the “full experience, eventually” of college.

This year, that will include tents, outdoor outlets, expanded wireless internet and other outdoor spaces for studying, to a tune of $250,000. The university has spent another $250,000 on plexiglass and similar barriers across the university, as well as $1 million on personal protective equipment, such as masks and gloves.

Taylor McWilliams said Friday that she had no qualms about helping her sister, a freshman from Chesterfield, move into the Blacksburg campus, considering the comparatively low number of COVID-19 cases.

“We’re just waiting for the spike, honestly,” McWilliams said, adding that she thinks her sister will be back home by October. “I think they’ll close in one month.”

Outside East Campbell Hall, Ashley Manheim was taking a photo of her mother, Carolyn, who had lived in that dorm before she graduated in 1993.

“I’m a little bit worried about them,” Carolyn Manheim said about Ashley, a 17-year-old from Chesterfield County, and her son, who’s a junior. While her son is particularly cautious about all things COVID-19, Carolyn Manheim said, “This one — I’m not certain about her.”

“I’ll be fine,” her daughter said.

In-person instruction to increase for Roanoke's elementary students, some secondary

The Roanoke School Board voted Wednesday to bring back all elementary students and certain middle and high school students four days per week.

Schools are using this data and other assessments to provide targeted instruction and additional support to students. Many divisions plan to increase in-person instruction.

The federal civil suits against the university alleged the cadets’ Constitutional due process rights were denied.

The plan will be presented March 9 to the Salem School Board for its approval.

The city school board is considering whether elementary and designated secondary students can attend school in person four days per week starting in March. A special meeting will be held Wednesday for public comments.

Quarantined cadets intermixed with others at Saturday event, VMI acknowledges

Additional measures the college might consider if cases don't decrease include shutting down athletics, transitioning to fully virtual classes and/or keeping cadets in their rooms, but "we're not there yet," VMI's spokesman said.

Virginia Tech board could raise tuition up to 2.9% after 2-year freeze

The board will meet on March 22.

Incoming freshman Samantha Turner (center) of Long Island, New York, had help moving in from her parents Michelle and Rob. Check-in this year will be spread over 10 days.

The university has added tent structures in an effort to make outdoor spaces more usable.

Friday was the first day of Virginia Tech student move-in.