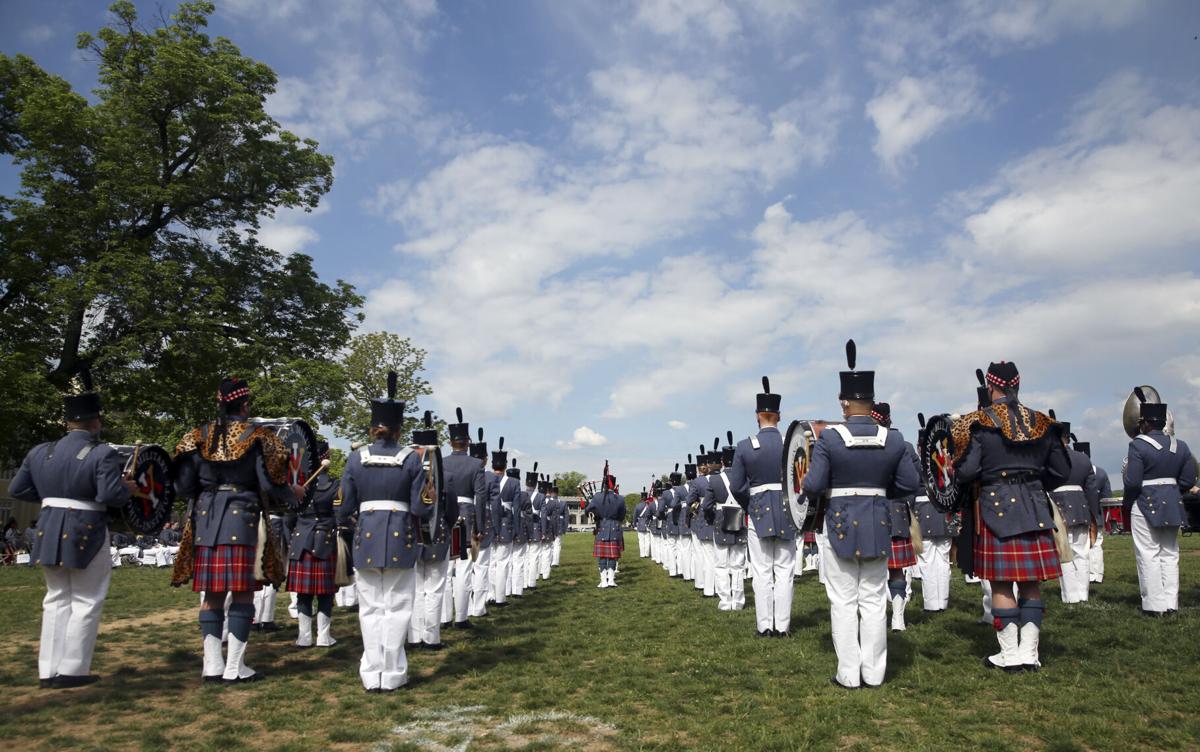 Virginia Military Institute cadets pipe band march across the field outside the barracks during an annual end of the year parade on May 11. 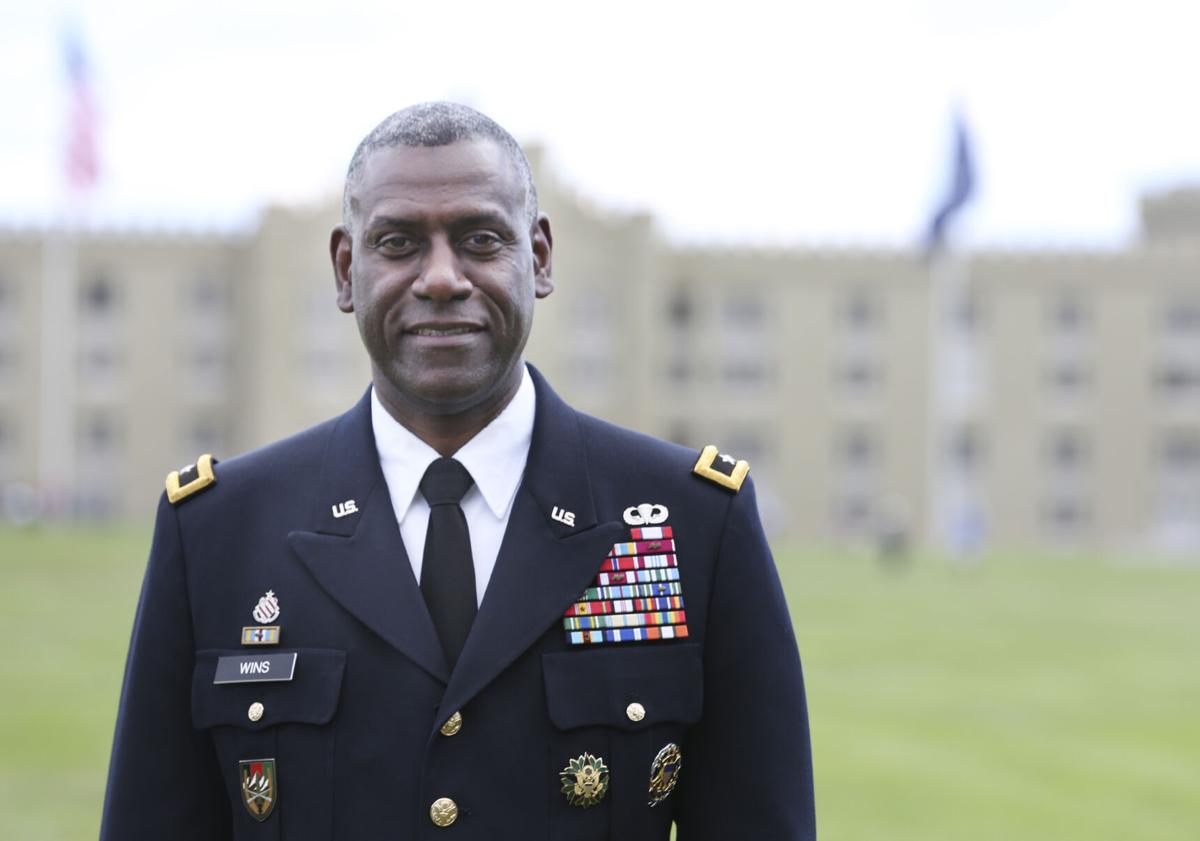 Maj. Gen. Cedric T. Wins, VMI's superintendent, addressed the SCHEV board Tuesday at its first meeting since the report was released.

Virginia Military Institute has already completed or is in the process of working on more than half of the recommendations made in an investigative report for how the nation’s oldest state-supported military college can improve equity and inclusion on campus.

VMI’s Board of Visitors met last week and voted to provide quarterly reports to the governor, General Assembly and State Council of Higher Education for Virginia, which was one of the recommendations included in the report released last month. The board said in a statement to the VMI community “that most of the recommendations contained in the report should be pursued.”

Gov. Ralph Northam, a VMI alum, last year ordered an independent investigation into the culture at the Lexington college after Black alumni shared their troubling experiences in the media. The investigation found that VMI had tolerated and not addressed “institutional racism and sexism.” Cadets and alumni reported that hearing racial slurs on campus was common, and investigators wrote that sexual assault was “prevalent at VMI.”

The report listed 42 recommendations, and VMI says it has already completed eight of them. The institute is working through 21 others, while seven require more study. Six recommendations would have to be completed by outside groups, like the General Assembly.

Maj. Gen. Cedric T. Wins, VMI’s superintendent, addressed the SCHEV board Tuesday at its first meeting since the report was released, saying he believes VMI has already taken some major steps forward since media reports first highlighted problems over a year ago.

“I think it will put us in a better place as an institution in the state of Virginia so that young men and women who want to come to VMI, who want to undertake the experience at VMI, can find their place,” Wins said.

In the past year, VMI has removed the statue of Confederate Lt. Gen. Thomas “Stonewall” Jackson from campus. Jackson’s name is in the process of being removed from campus buildings, and art is being recontextualized. The iconography has received most of the pushback from the VMI community, particularly alumni, Wins said.

“A lot of our folks look at a lot of the iconography that exists on the campus today and they identify with that in the time and day they were there,” Wins said. “We need to focus on the things that are fundamental to the VMI experience, and those that are of lesser importance to cadets today, we ought to think about how we can modify and adjust, and that doesn’t necessarily mean taking everything down.”

VMI reported it will review its amnesty policy that doesn’t provide immunity to cadets for a drug or alcohol violation if they report a sexual assault incident. VMI takes drug use seriously, so it’s likely the General Assembly will have to accomplish this recommendation by eliminating the exemption in state code it provided to VMI upon the college’s request.

Cadets and alumni told investigators that a source of racial tension is the relationship between athletes and non-athletes, with non-athletes claiming athletes receive favorable treatment. Investigators suggested re-evaluating the college’s status as a Division I institution.

Wins said he was reluctant to downgrade from Division I athletics, saying that 40% of the Black cadets are athletes. He said it would have “unintended consequences” on cadet diversity. A SCHEV board member suggested developing strategies to recruit Black students who aren’t athletes.

VMI is also in the process of reviewing the policies of its student-run Honor Court, which investigates and prosecutes alleged violations of the honor code. Investigators found that while cadets of color represent 23% of the corps, they’ve made up 41% of the cadets convicted and automatically expelled since 2011.

“While it’s been difficult to hear, we take the findings as taken,” Tom Watjen, the new VMI Board of Visitors president, told the SCHEV board. “We know that there are things we can do differently.”

Both Botetourt County and Roanoke County public school divisions recommend unvaccinated individuals, which would include all students under the age of 12, should still wear masks in school.

The governor made the announcement on the Virginia Tech campus.

Washington and Lee University announced Tuesday it will name a new academic center for teaching and research on race after one of its late, in…

“People are going to have to make a choice,” said Hollins President Mary Dana Hinton. “We have to think about what’s best for our community.”

With students preparing to return to public schools, Gov. Ralph Northam is proposing to use $250 million in federal emergency aid to help school divisions upgrade the ventilation systems in school buildings.

The most recent involved a vendor used by the school.

The county School Board agreed this past week that health measures for a handful of upcoming activities before the Aug. 12 start of the school year will follow that guidance as the board prepares to take a vote on a full school plan next month.

School staff responded with presentations that explained policies that have been in place for years addressing treatment of transgender students and appreciation of cultural heritage.

Virginia Military Institute cadets pipe band march across the field outside the barracks during an annual end of the year parade on May 11.

Maj. Gen. Cedric T. Wins, VMI's superintendent, addressed the SCHEV board Tuesday at its first meeting since the report was released.