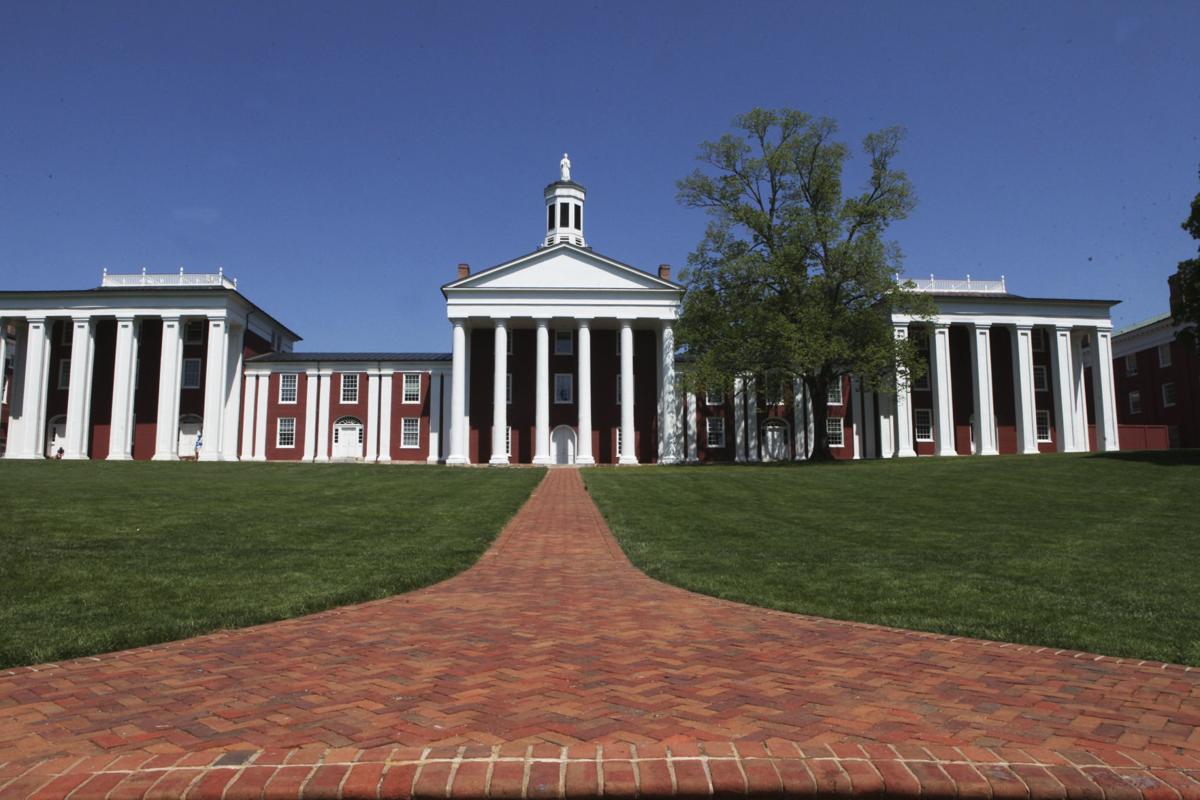 The Colonnade of Washington and Lee University in Lexington consists of Payne Hall (from left), Washington Hall and Chavis Hall, which was renamed for the first black graduate of an American college. 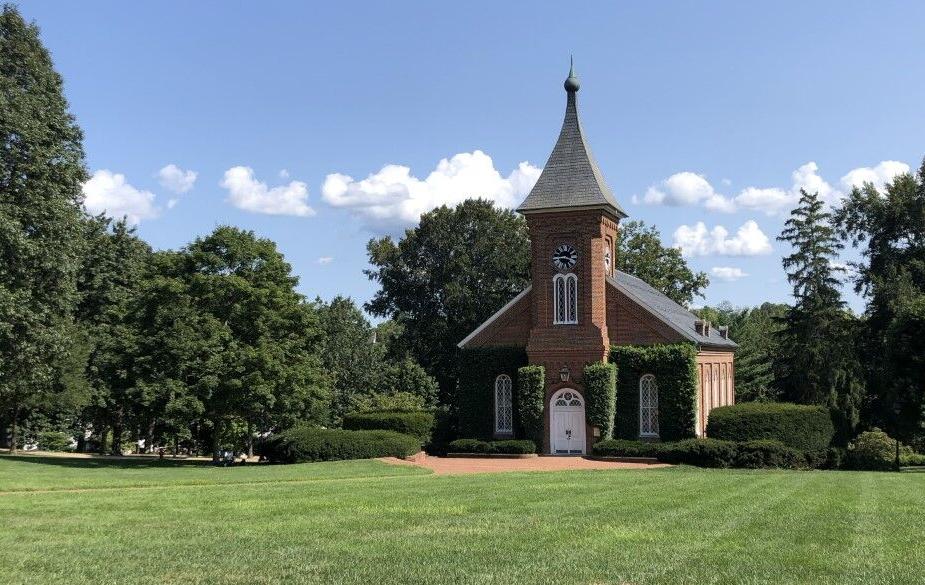 Lee Chapel, named for former university president Robert E. Lee, is one of the central features of the Washington and Lee University campus in Lexington. It faces Washington Hall and the rest of the Colonnades. 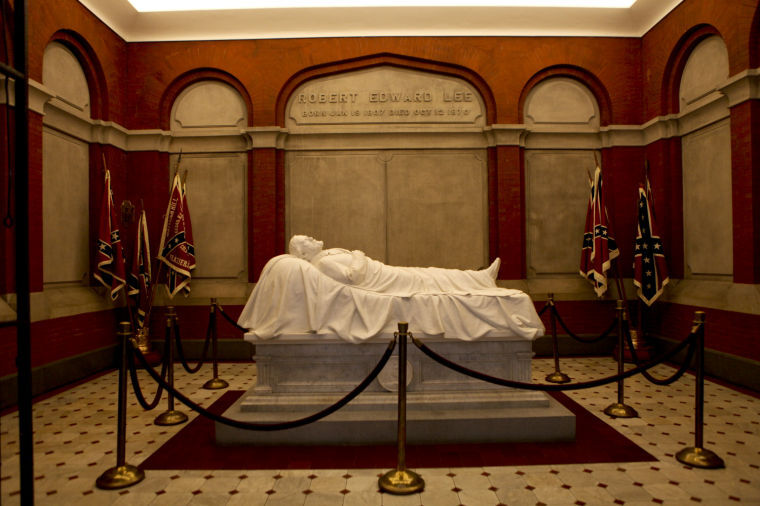 Sculptor Edward Valentine’s recumbent statue of Robert E. Lee is the central figure in the Lee Chapel on the Washington and Lee University campus. The Confederate battle flags in the background have been removed since this photo was taken.

Washington and Lee University will maintain its name after a nearly yearlong review of whether to reconsider its linkage to Confederate Gen. Robert E. Lee.

The Board of Trustees announced that Friday as well as that there was no consensus regarding a name change. The board, acknowledging that having the university named after Lee can be painful for people who experience racism, voted 22-6 to keep the name. How each board member voted was not disclosed.

And at the same time, the board announced it would expand diversity and inclusion initiatives and a series of changes to campus buildings and symbols, practices and governance.

“We are confident that W&L will emerge stronger as a result of our active engagement on these issues, the work we have done together, and the actions and commitments we are taking,” the board said in its written statement. “We look forward to continuing to engage our community on these critical issues as we execute on our strategic plan in support of our mission.”

Washington and Lee formed a special committee in July to consider its relationship to Lee and whether to change its name. The board gathered input from campus constituencies, analyzed data and consulted experts.

The board received a divided response, in survey responses and reaction on campus, among the Washington and Lee community about the name of the university.

University faculty members were mostly in favor of dropping Lee’s name, voting 188-51 to do so during a meeting last summer. Some students also advocated for removing Lee’s name by organizing a campus walkout event at the end of the school year to express their position.

Banners with the words “Retain the Name” were displayed on campus and signs around Lexington, and pamphlet’s about Lee’s association with the university were left at buildings.

Washington and Lee has undergone a few name changes. It was founded as Augusta Academy in 1749, and then it became Liberty Hall Academy in 1776. After George Washington made a significant financial gift, it was renamed Washington College after the first president in 1813.

Originally founded as Augusta Academy in 1749, the university has repeatedly changed its name during its history. It became Liberty Hall Academy in 1776, and Washington College in 1813, after the first president gave it a significant financial gift.

Four months after surrendering to Union Gen. Ulysses S. Grant in Appomattox in 1865, Lee was invited to serve as president of what was then called Washington College. He filled the role for five years until his death. He was revered for his work there at the time, credited with stabilizing the college’s finances and modernizing its curriculum. Shortly after his death, the university was renamed in his honor. He is entombed on the campus in Lexington, where the Confederacy’s legacy is seeped into the community’s identity and culture.

“Our community holds passionate and divergent opinions about our name,” the board wrote in a statement to the university community. “The association with our namesakes can be painful to those who continue to experience racism, especially to African Americans, and is seen by some as an impediment to our efforts to attract and support a diverse community. For others, our name is an appropriate recognition of the specific and significant contributions each man made directly to our institution.”

Colleges and universities across Virginia are reckoning with the names of their institutions and iconography associated with the Confederacy and slaveowners. Several community colleges are in the middle of changing their names. Virginia Military Institute, which is also located in Lexington, has taken steps to temper its association with the Confederacy, including removing the statue of Confederate Lt. Gen. Thomas “Stonewall” Jackson — who taught at VMI — from campus and scrubbing his name from buildings.

Washington and Lee has already made some changes. It’s removed Confederate flags and canceled visits from Confederate groups. This year, it hired its first associate provost for diversity and inclusion.

The board announced Friday it wants to expand its own diversity representation, form a board committee on diversity, equity and inclusion, and lead an examination of campus residential and social institutions. The board is made up of 28 people, 23 of whom are men. More than three-quarters of the board is white.

The board said the university will commit to establishing a new academic center for the study of Southern race relations, culture and politics as well as redesign the diploma, which is stamped with portraits of Lee and Washington.

The university will make changes to campus symbols and buildings. Lee Chapel will undergo renovations and be renamed to University Chapel, in keeping with its original 19th-century name of College Chapel. The board said it would oversee and approve interior changes to restore its unadorned design and to physically separate the auditorium from the Lee family crypt and a Lee memorial sculpture.

The university also will end Founders’ Day, an event held each year in January on Lee’s birthday.

The board announced that $225 million would be dedicated for scholarship, curricular development and student support, including raising funds to support its effort to not consider an applicant’s ability to pay for their education when making admission decisions and guaranteeing funding for internships and other experiences.

“We have been moved by listening to members of our community recount painful experiences at Washington and Lee,” the board wrote. “You have made a difference.”

Faculty expressed frustration at the decision. Law professor Chris Seaman called for immediate efforts to improve the diversity of the board.

“Imagine a board of trustees more afraid of being called woke than racist,” law professor Carliss Chatman posted on Twitter.

Washington and Lee name change decision will be made in June, rector says

Faculty are largely in favor of dropping the former Confederate general's name, while students and alumni are divided

LEXINGTON — In August, the Washington and Lee Board of Trustees said it may take six months or more to decide whether the university will drop…

More time is needed to decide whether W&L will drop Robert E. Lee’s name, according to an email sent Friday from Mike McAlevey, rector of the board of trustees.

W&L Board of Trustees announces committee to review name after efforts by faculty, student government

Washington and Lee faculty vote to change the university's name

Washington and Lee University faculty passed a motion to remove Robert E. Lee from the name of the small liberal arts college in Lexington.

The Colonnade of Washington and Lee University in Lexington consists of Payne Hall (from left), Washington Hall and Chavis Hall, which was renamed for the first black graduate of an American college.

Lee Chapel, named for former university president Robert E. Lee, is one of the central features of the Washington and Lee University campus in Lexington. It faces Washington Hall and the rest of the Colonnades.

Sculptor Edward Valentine’s recumbent statue of Robert E. Lee is the central figure in the Lee Chapel on the Washington and Lee University campus. The Confederate battle flags in the background have been removed since this photo was taken.