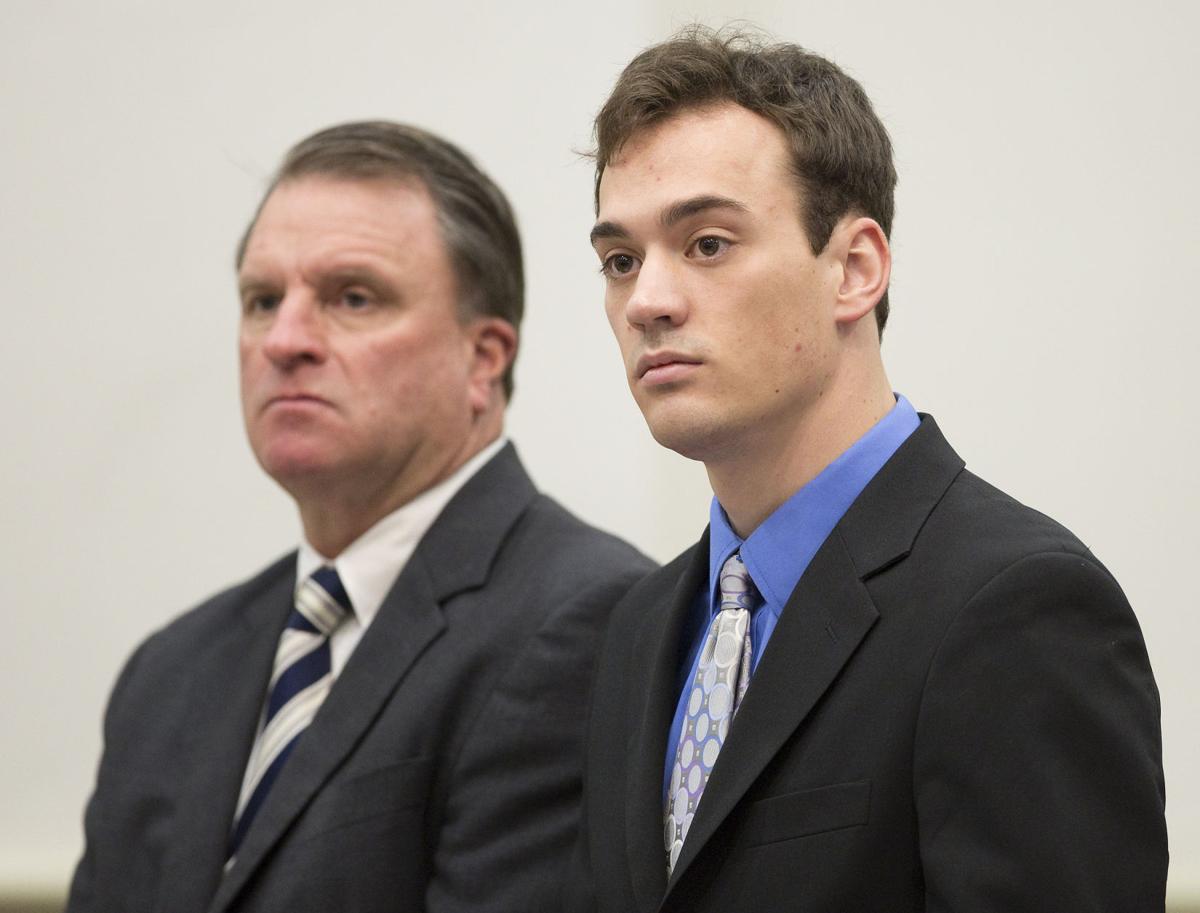 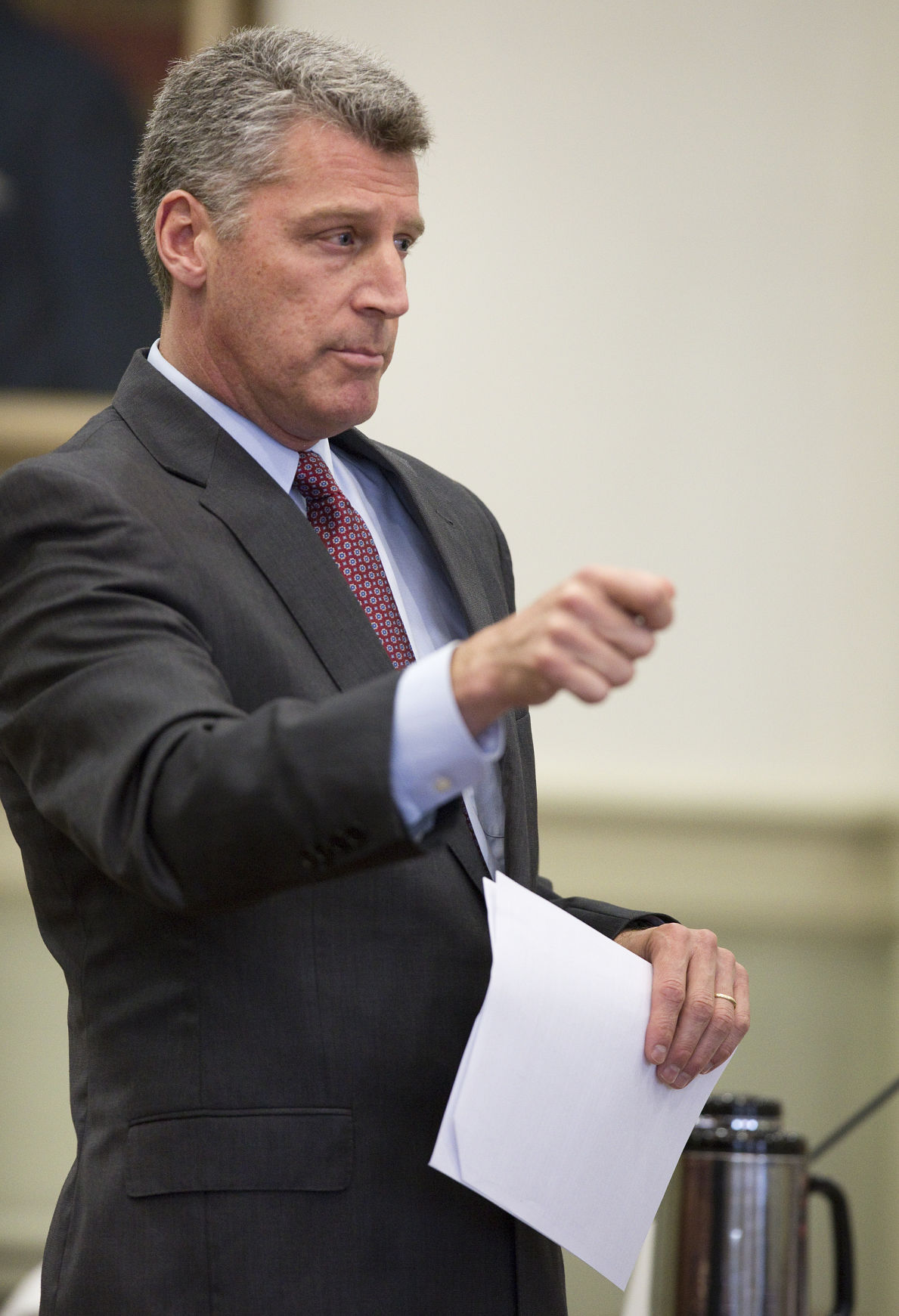 Defense attorney Timothy Heaphy cross-examines a witness on the stand during a bench trial at Franklin County Circuit Court on Thursday for men charged with hazing after the death of Ferrum College student Michael Anthony Walker. 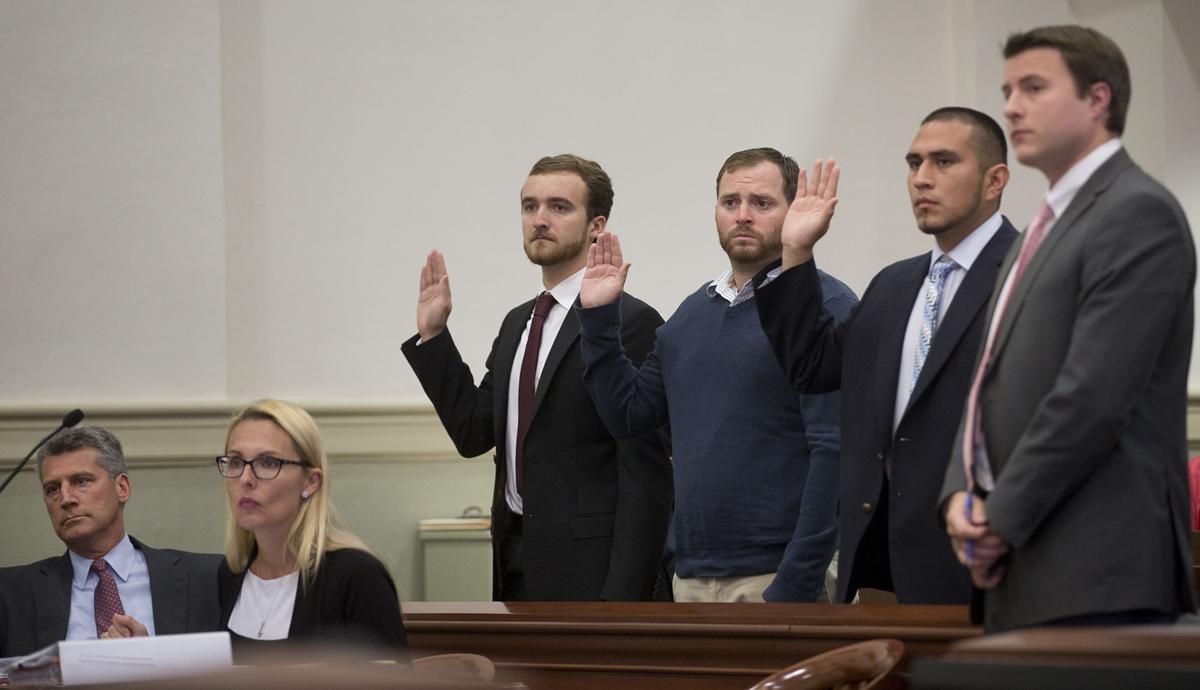 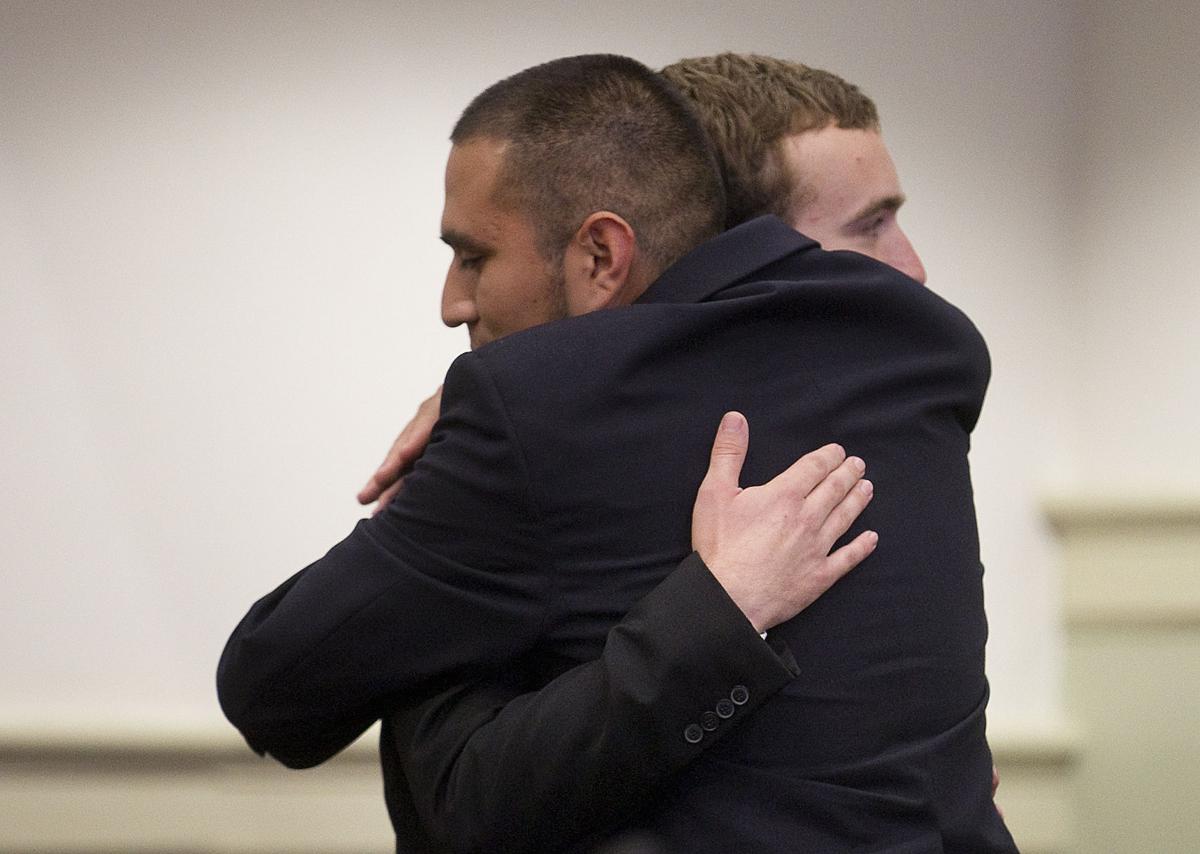 Adali Jonathan Cano hugs Nicholas Jordan Hoxter after learning that their hazing charges were dismissed by the judge after a bench trial in Franklin County Circuit Court.

ROCKY MOUNT — A Franklin County judge Thursday dismissed all counts against three men who had been charged with hazing in connection with the alcohol-related death of a 20-year-old Ferrum College student in April.

Three other men, also charged with hazing, entered into agreements with the commonwealth’s attorney through which the charges could be dropped in one year.

The six men were charged after the April death of Michael Anthony Walker. At the time, all were members of the college’s Sigma Alpha Kappa fraternity, and Walker was a newly inducted pledge. Their cases were divided into two sets of three each Thursday in Franklin County Circuit Court: a hearing for the three entering pleas; and a trial for the three contesting the charges.

Michael Rucinski was Walker’s big brother in the fraternity, meaning the two were in the same “bloodline.” Theirs was the tequila bloodline. Rucinski bought Walker a fifth of tequila. Though it’s customary to give new brothers the liquor of their bloodline and they are expected to drink some, Dudley said, there’s no evidence that they must drink all of it. Walker was seen drinking the tequila, though Dudley said it’s hard to say how much he drank.

Pictures in which Walker appears to be unconscious were retrieved from Rucinski’s phone.

On April 17, law enforcement and public safety officers responded to a call to residence on Union Road in an area known as Trollville where they found Walker unresponsive.

Rucinski administered CPR to Walker, traveled in the ambulance with him and remained by his side for much of his stay at Carilion Roanoke Memorial Hospital.

Walker died April 25, after spending just over a week at the hospital.

Medical examiner Dr. Eli Goodman said Walker suffered an anoxic brain injury attributed to acute ethanol toxicity. He said this essentially means that Walker sustained an injury to his brain because of a lack of oxygen, which was a result of alcohol consumption.

After Dudley presented his case during the trial, defense attorneys for Adali Jonathan Cano, Nicholas Jordan Hoxter and Michael Lewis Satterwhite made motions to strike the evidence. Hoxter also was charged with purchasing or providing alcohol for someone under the age of 21.

The three men were officers in the fraternity. Dudley argued that, as such, they had an obligation to prevent behavior that could endanger or cause bodily injury to another person.

Defense attorneys said the prosecutor failed to show that their clients forced Walker to drink or caused him harm. Aaron Houchens, who represented Cano, said there was no “corporate responsibility” here as Dudley suggested.

The fact that some of the men acknowledged they attended the party did not make them responsible, attorneys argued.

Melissa Keen, who represented Satterwhite, said there was no evidence he even attended the party. Dudley acknowledged he wasn’t able to establish Satterwhite’s presence, and conceded to Keen on her motion.

Timothy Heaphy, representing Hoxter, argued that although his client admitted to legally purchasing two kegs for the party, there was no evidence anyone underage drank the beer. Though witnesses said Walker had been seen drinking, tequila was the only kind of alcohol specifically mentioned.

Though he commended Dudley for his efforts given that several of the men did not provide information for the investigation, the judge agreed with the defense attorneys and dismissed all charges against the three men.

The other three defendants, Trevin Wayne Clark, David James Creedon and Michael Richard Rucinski, reached agreements with the prosecutor in which they will serve some time in jail and complete 30 hours of community service each. Their cases will be continued for a year, at which point the charges against them could be dismissed, provided they remain out of trouble.

Clark will serve five days in jail, Creedon will serve four days and Rucinski will serve 30 days. Though these are misdemeanor charges, each of the men will serve the full number of days they agreed to, Dudley said.

Clark and Creedon entered not guilty pleas. Rucinski did not enter a plea on the charge of hazing.

Clark and Creedon were also officers in the fraternity, serving in the roles of pledge master and president, respectively.

Rucinski also was charged with purchasing or providing alcohol for someone under the age of 21. On that charge, he pleaded no contest. His driver’s license will be suspended for six months. He’ll be eligible to have that dismissed in a year as well.

Perdue warned the men they would be “under a microscope.”

Ferrum College also imposed sanctions on members of the campus fraternity, which officials said has since been disbanded.

In a written objection, the defense said it was told by federal Judge Elizabeth Dillon to make its arguments while she was out of the courtroom -- denying it the right to be heard.

Defense attorney Timothy Heaphy cross-examines a witness on the stand during a bench trial at Franklin County Circuit Court on Thursday for men charged with hazing after the death of Ferrum College student Michael Anthony Walker.

Adali Jonathan Cano hugs Nicholas Jordan Hoxter after learning that their hazing charges were dismissed by the judge after a bench trial in Franklin County Circuit Court.