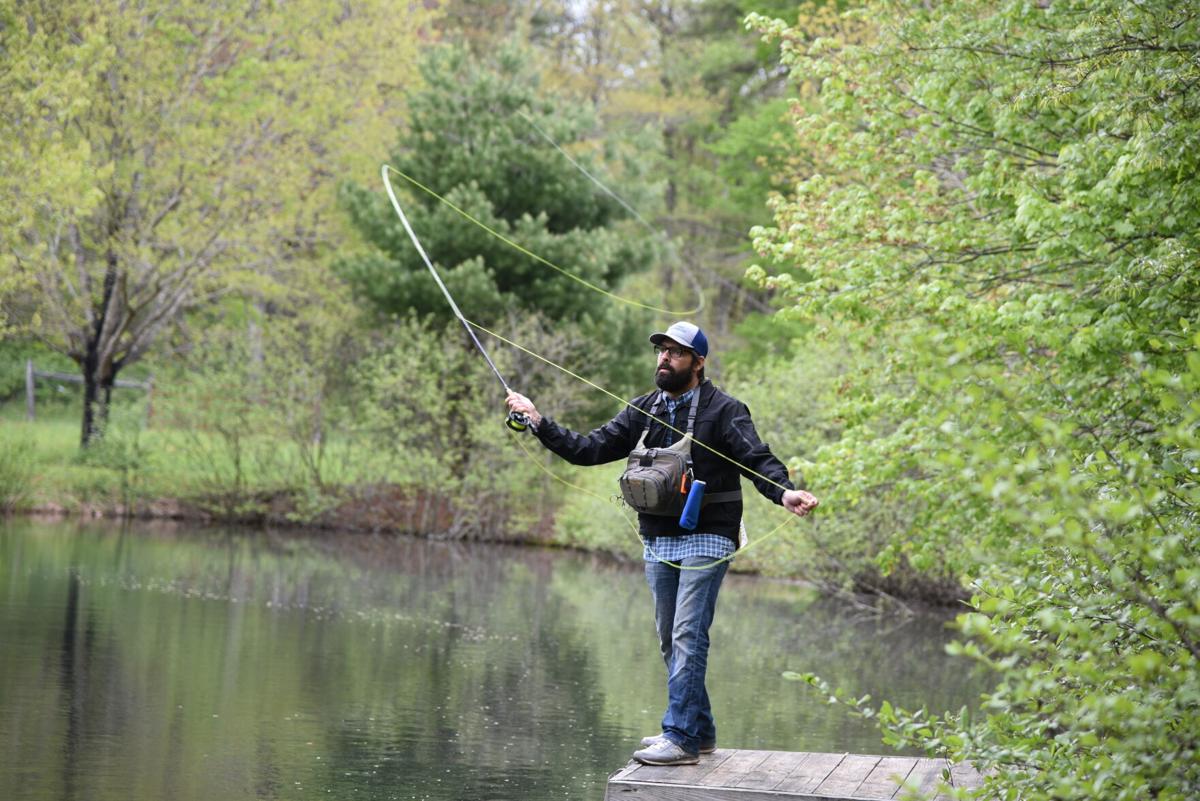 James Beheler of Franklin County casts his fly rod into a private pond on Bent Mountain. 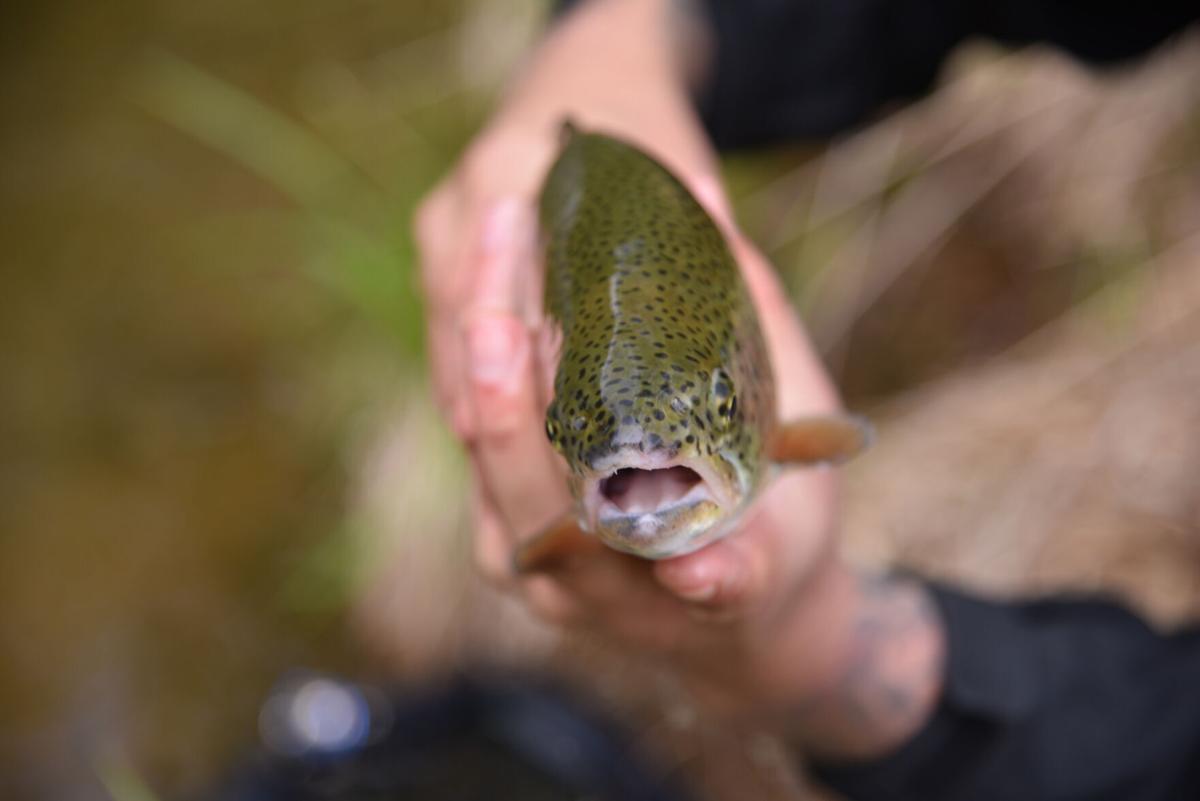 James Beheler holds a rainbow trout he caught and released while fishing recently at a private pond on Bent Mountain. 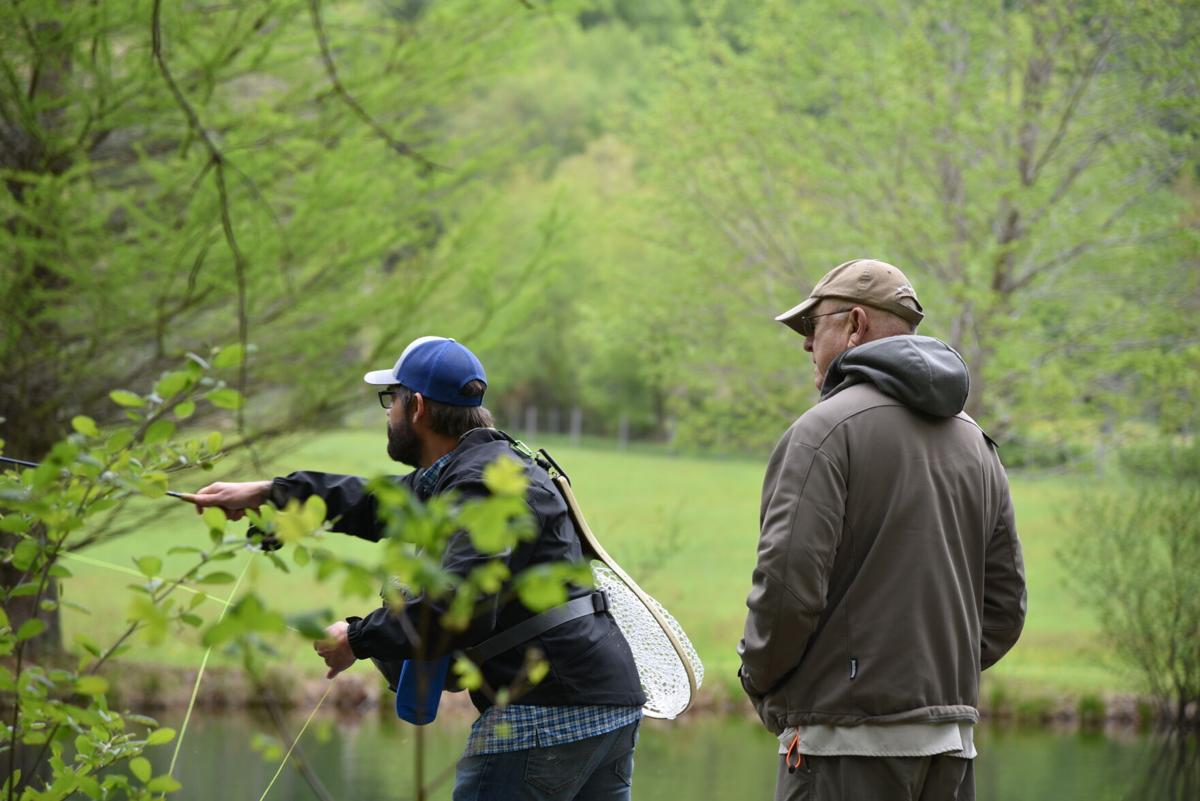 James Beheler casts his fly rod under the watchful eye of mentor and friend Bob Crawshaw of Project Healing Waters. 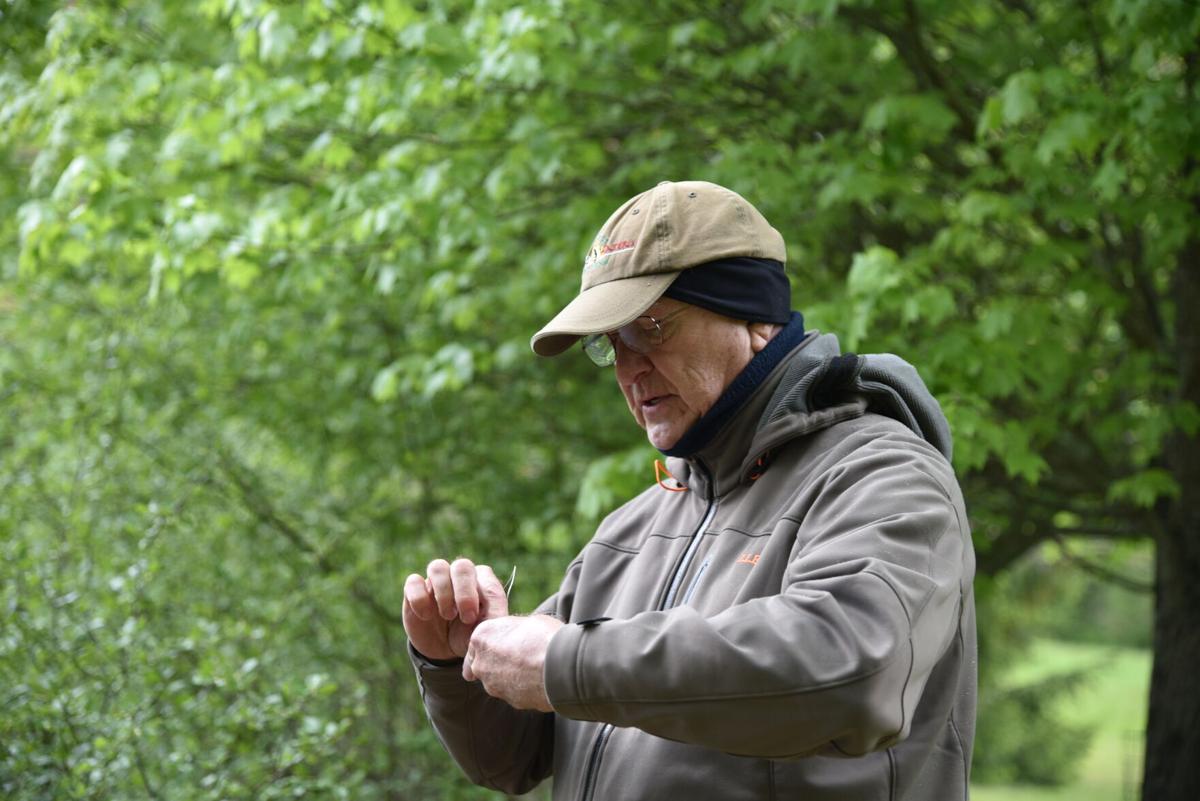 Bob Crawshaw with Project Healing Waters ties a fly to a fly rod at a pond on Bent Mountain.

Standing on a small pier overlooking a private pond on Bent Mountain, James Beheler casts his fly rod into the water. On his first cast, he expertly hooks a trout.

Gently scooping it into a net, Beheler holds it up for others to see before slowly releasing it back into the water. Afterward, he looks over his shoulder and smiles at his mentor and friend, Bob Crawshaw.

Beheler’s journey here began 10 years ago when he was serving in the Navy and had been deployed to Kunar Province, Afghanistan.

“It’s something that’s going to be with us for the rest of our lives,” Beheler said of the combat he and his comrades witnessed. “Some [deaths] stick with you, especially the innocents, the civilians.”

As a Navy corpsman, Beheler was expected to care for wounded troops, while also fighting the enemy. Just seven months into his deployment, Beheler earned the Army Commendation of Valor for saving a soldier suffering from a gunshot wound. “We were on lockdown for about 12 hours that day,” he recalled. “I must have sat on him for about five of those hours” to prevent him from bleeding to death.

Back home, after serving a total of 14 months in Afghanistan, Beheler struggled. He was depressed and angry and admittedly drank too much. “I come home and have no motivation, no purpose,” he said.

With his outlook on life as bleak as ever, Beheler decided one night to drink himself into oblivion and end his life. “I was getting ready to black out and eat a .45 round,” he said.

Until his then-16-year-old daughter, Jaelyn, called. “If it hadn’t been for her, I wouldn’t be here. She’s definitely what kept me going,” Beheler said.

Now 21, Jaelyn Beheler remembers that night. She was frustrated because her father seemed to have lost his way. “I was mad at him,” she said. “Something told me to call him and said to let him have a piece of your mind.”

After that call, Beheler put away his gun and called his friend and fellow veteran, Kyle Chanitz, who took him to the Veterans Affairs Medical Center in Salem.

While at the VA, Beheler met Crawshaw, a 34-year Navy veteran who works with Project Healing Waters.

Founded in 2007, the nonprofit provides mental and physical rehabilitation to disabled active military personnel and disabled veterans through fly fishing outings and other educational opportunities.

As its deputy regional coordinator for Virginia and a longtime fly fishing guide, Crawshaw has no shortage of stories touting the success of the program.

Project Healing Waters began a decade ago when Ed Nicholson, a retired Navy captain recuperating at Walter Reed National Military Medical Center in Bethesda, Maryland, noticed a soldier next to him who had lost an arm in Iraq go through a monotonous daily regimen of physical therapy, meals and meds.

As Crawshaw tells it, Nicholson asked permission to take the soldier fly fishing one weekend.

“The emotional rehabilitation was so dramatic that he was asked if he could take seven more the following weekend,” Crawshaw said.

The Salem project, among the first in the nation, began shortly after. Now there are more than 250 programs serving both men and women nationwide.

Many veterans, Beheler included, are trying to cope with the stresses of day-to-day life outside the military, Crawshaw said. All of them, regardless of what conflict or war they served in, share a common connection. Some have lost limbs while others have traumatic brain injuries. Most have post-traumatic stress.

“Fly fishing is a simple sport that gives them serenity and solitude,” Crawshaw said.

Beheler, who was medically retired from the Navy after serving six years, wholeheartedly agrees. Although he still suffers from nightmares and has moments when he gets easily irritated, when there’s a fly rod in his hand, Beheler is in a good place.

“When I’m doing this, I don’t think about any of those things,” he said. “It’s very rewarding. It’s all I think about, really.”

Scott Barrier, who owns the Bent Mountain property with his wife, Helen, opened his spring-fed pond to veterans in the Project Healing Waters program shortly after meeting Crawshaw. He keeps it stocked with brook, rainbow and brown trout. With its short pier and gentle slope to the water’s edge, the pond is perfect for veterans who might be unable to navigate the steep, uneven terrain found on most riverbanks.

The pond also was the first place Crawshaw took Beheler to fly fish. “He caught a huge trout, a 23-inch trout,” Crawshaw recalled. From that moment, Beheler was hooked.

Last October, using GI Bill benefits, Beheler went to Sweetwater Guide School in Montana to learn the art of fly fishing in the hopes of becoming a guide and a volunteer with Project Healing Waters. “I met a great bunch of guys,” he said of his time there.

In September, Beheler will return for more advanced training. “I want to get more involved with it,” he said, adding that he hopes by sharing his story, he can help others. “If I could just reach one person that was in the same place that I was it would be worth it.”

Jaelyn Beheler left college and moved back home to be with family when the COVID-19 pandemic hit. She said her father, who taught her to love the outdoors, is well-suited for the sport.

Calling the circumstances that led her father to where he is in life “a blessing in disguise,” she said, “I think every moment now he is truly present. I love my dad. And above anything, if you have family, or friends you value as family, cherish that. You’re rich.”

Project Healing Waters can be found at www.projecthealingwaters.org.

James Beheler said he would like to offer his help to other veterans in need. Anyone interested in contacting him can reach him via Facebook messenger at James Quinn Beheler.

On Mike Doyle’s fly-fishing adventure, he snagged a couple of trees, waded into a swift, rising Roanoke River and swapped a few tall tales ove…

James Beheler of Franklin County casts his fly rod into a private pond on Bent Mountain.

James Beheler holds a rainbow trout he caught and released while fishing recently at a private pond on Bent Mountain.

James Beheler casts his fly rod under the watchful eye of mentor and friend Bob Crawshaw of Project Healing Waters.

Bob Crawshaw with Project Healing Waters ties a fly to a fly rod at a pond on Bent Mountain.