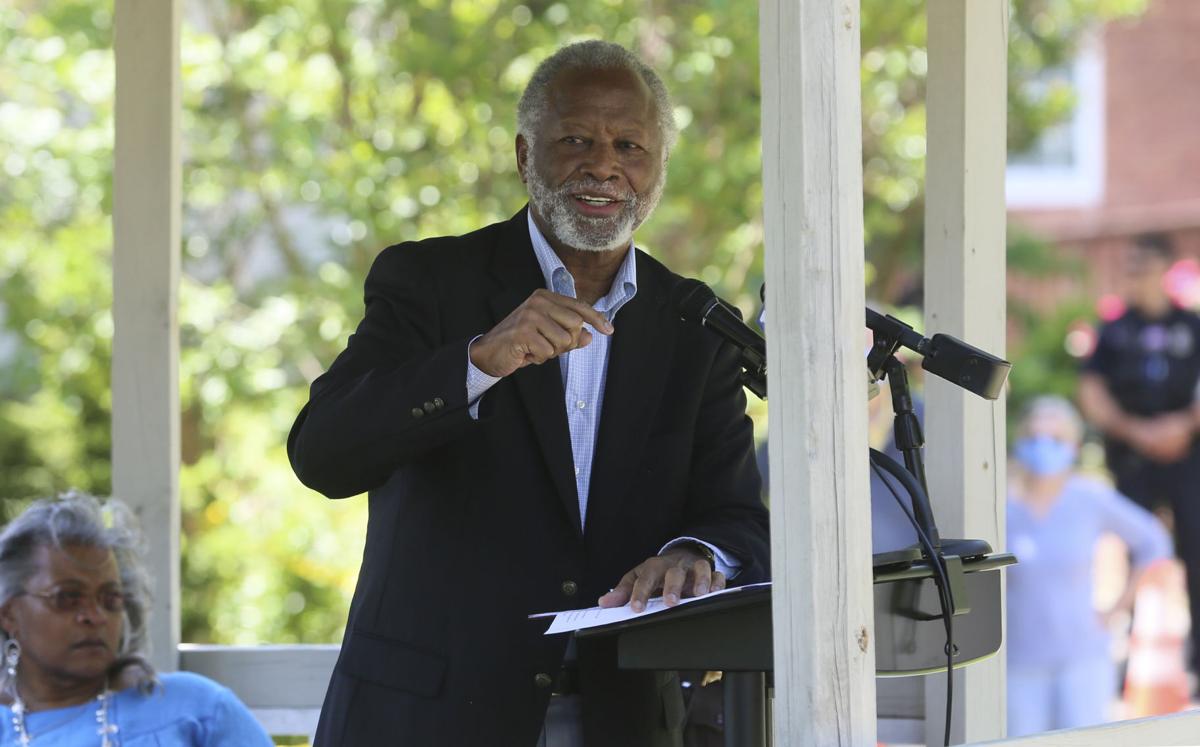 Wornie Reed of the Virginia Tech Race and Social Policy Center speaks on the topic of police violence during Tuesday’s Dialogue on Race Relations event in Marcia’s Park in Blacksburg. 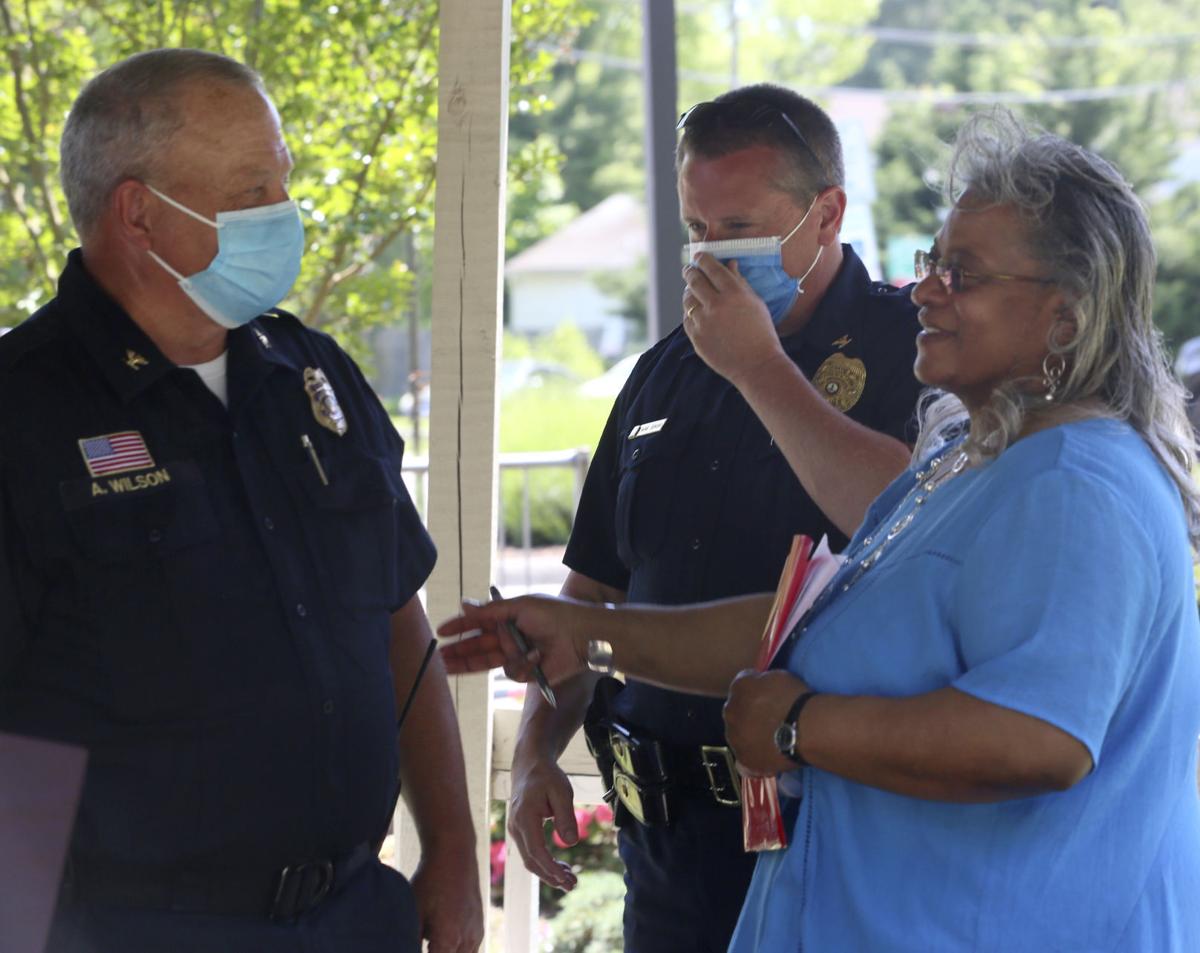 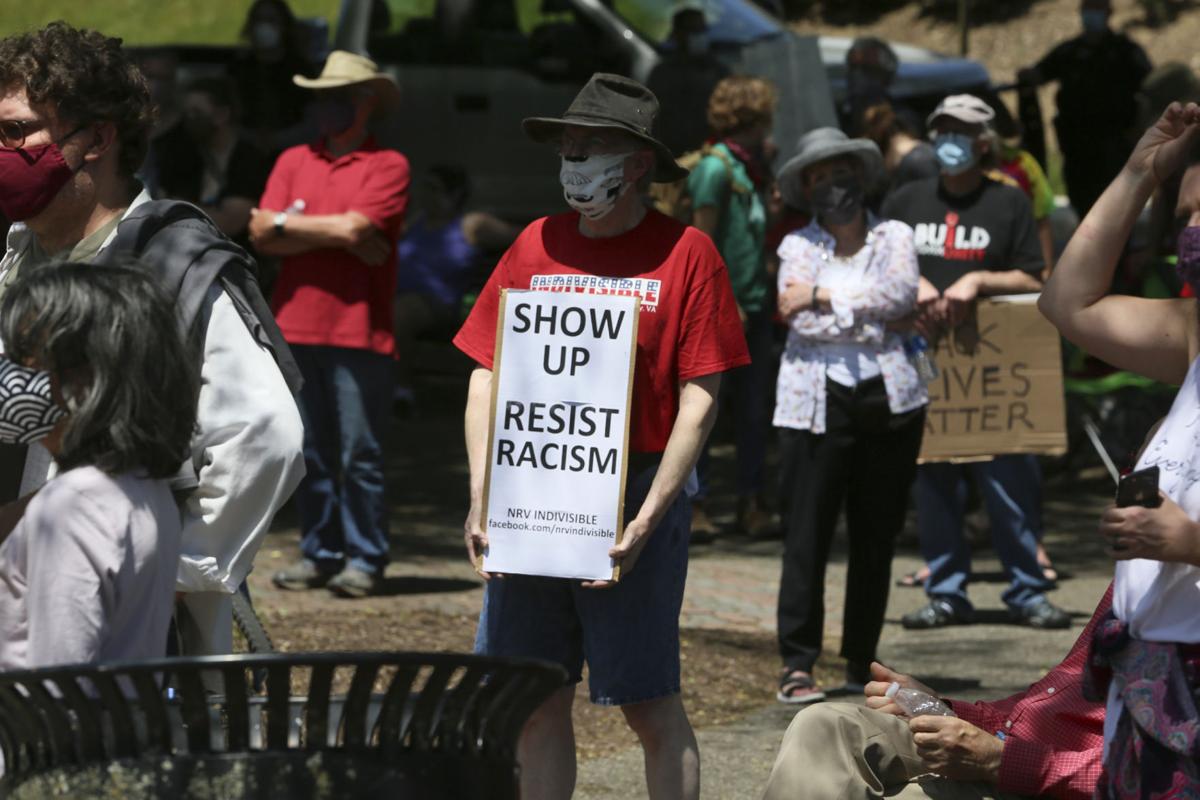 Dale Wimberley of NRV Indivisible was one of more than 200 people that attended a Dialogue on Race Relations event in Marcia’s Park next to the Blacksburg Police Department on Tuesday.

BLACKSBURG — Local government officials and community leaders from across Montgomery County took the podium Tuesday afternoon to call for sweeping changes to race and police relations.

The event, which drew more than 200 people and took place in Marcia’s Park in Blacksburg, came just a day after hundreds of demonstrators marched through downtown to call for an end to police brutality and systemic racism.

The messages voiced during both Blacksburg events backed many of the points raised in nationwide protests that were triggered by the May 25 death of George Floyd while in police custody in Minneapolis.

“Black Lives Matter” signs were a common sight in the park Tuesday, as were other placards with messages such as “Stop Racism Now.” At least one other sign referenced Graham v. Connor, a controversial 1989 U.S. Supreme Court ruling that one of Tuesday’s speakers argued gave police a pass to unjustifyingly kill African Americans.

“We believe that injustices are being committed across the country,” Montgomery County School Board member Penny Franklin said as she opened the event.

Franklin then urged the public to get involved in discussions about race and police relations.

“Without that, we will stay exactly where we’re at,” she said.

Franklin is heavily involved with the Dialogue on Race, a yearslong local project that involves activities such as regular discussions and collaborations between various community leaders and locally elected officials.

Wornie Reed, director of the Virginia Tech Race and Social Policy Center, said the project involves various smaller groups that specifically tackle categories where race relations have been an issue. He said in an interview before Tuesday’s event that those categories include education, law enforcement and employment.

While improvements need to continue, some of the progress that the Dialogue on Race has helped usher in includes the hiring of more black teachers and administrators in the local school district, Reed said.

“We institute ways to get it done,” he said.

During his comments to the crowd Tuesday afternoon, Reed specifically spoke about Graham v. Connor.

“A key sentence in [former Chief Justice William] Rehnquist’s decision is the following: ‘The reasonableness of a particular use of force must be judged from the perspective of a reasonable officer on the scene, rather than with 20/20 hindsight,’” Reed said.

He said that one detail makes the ruling flawed when it comes to deciding when it’s appropriate for police to use excessive force.

“It wouldn’t have been so bad if he had not added the sentence that I read. That changed things,” Reed said after the event. “We were on our way to a better situation, until that happened.”

Reed said rulings can be overturned, as evidenced by the fact that several have been overturned in the past 15 to 20 years. He said advocacy is needed to change policies.

Another case Reed referenced during his speech was Tennessee v. Garner, a 1985 U.S. Supreme Court ruling that made it illegal for police to use deadly force to prevent escape unless an officer has strong reason to believe that the fleeing suspect poses a significant safety threat to the officer and others.

“In some cases, police officers have avoided prosecution for an extrajudicial killing because they feared that the person was reaching for an imaginary gun. This assumption is a privilege not usually granted in a civilian-to-civilian encounter,” he said. “It would appear that by providing the officer that privilege, he or she is given more rights than a civilian, meaning that their life is more important than a civilian’s life.”

Other local government officials made remarks after Reed. They included members of Blacksburg and Christiansburg town councils and local police chiefs, each of whom condemned the recent cases of police brutality.

“I felt nauseous,” he said. “And that feeling was almost immediately replaced by anger.”

Blacksburg Mayor Leslie Hager-Smith and Councilman John Bush also each condemned some of the actions police in other cities have taken against protesters. They referred to the reports of police using rubber bullets and tear gas.

Bush said the public can no longer stand silent.

“In our silence, we are condoning all of these actions,” he said. “Until black lives matter, no lives actually matter.”

Karen Jones, of the Montgomery-Radford-Floyd branch of the NAACP, said the country has in actuality been dealing with two viruses: COVID-19 and racism.

“We are done dying,” she said. “This is our national call to action.”

Montgomery County Board of Supervisors Chairman Steve Fijalkowski, a former Virginia state trooper, said he was baffled at the oversight that allowed Derek Chauvin to be employed as a police officer. Chauvin was the officer who was eventually charged with third-degree murder and manslaughter charges in the days following Floyd’s death.

Eric McCargo, a Blacksburg resident who attended Tuesday’s event, said he supports the overall calls from the local officials and community leaders made. He said he wished, however, that more specific ideas had been suggested.

McCargo said he would support the creation of some form of civilian review board that would keep an eye on the local police agencies. He said his experience with local authorities has generally gone well. He said he views the community as progressive, but he also said that he’s unsure if some issues are being overlooked.

“We’ve had good experiences,” he said. “But any Montgomery County cop, I guess, could have like 17 complaints against them and that 18th complaint could be the next George Floyd. We’ll never know.”

BLACKSBURG — Several hundred people on Monday marched through Blacksburg, calling for an end to police brutality and systemic racism in an ech…

Following a weekend of protests in parts of Roanoke, city council members voiced their support for both local police officers and for the protesters.

Nationwide protests sparked by the death of an unarmed black man at the hands of police in Minneapolis reached Roanoke on Saturday.

Wornie Reed of the Virginia Tech Race and Social Policy Center speaks on the topic of police violence during Tuesday’s Dialogue on Race Relations event in Marcia’s Park in Blacksburg.

Dale Wimberley of NRV Indivisible was one of more than 200 people that attended a Dialogue on Race Relations event in Marcia’s Park next to the Blacksburg Police Department on Tuesday.