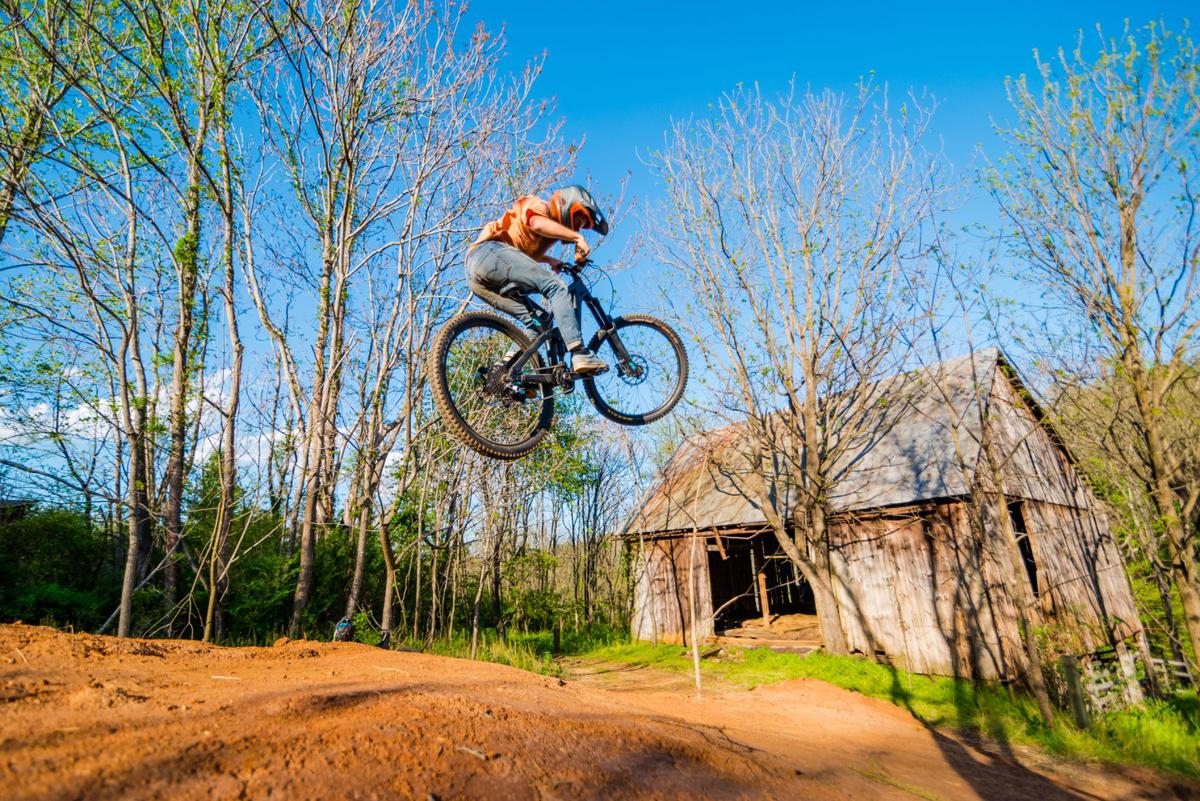 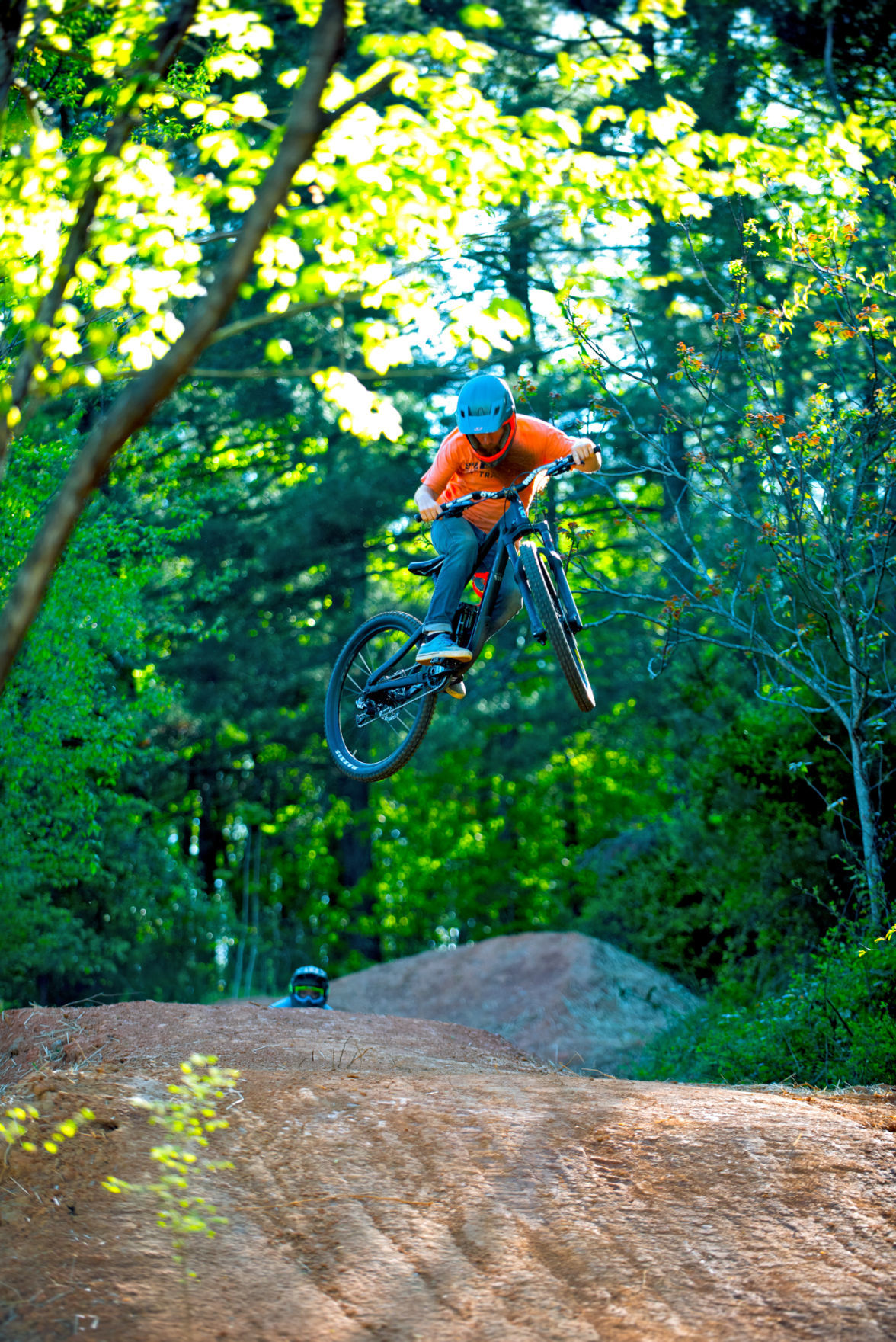 On the Old Buzzard trail in Waid Park outside Rocky Mount, experienced riders can catch air on the quarter-mile stretch with 15 jumps. Other riders can roll along without pedaling to experience the roller coaster effect.

Franklin County is doing its part to help the Roanoke Valley brand itself as the East Coast mountain biking capital with a new trail at Waid Park.

The county’s parks and recreation department added a quarter-mile downhill jumpline trail dubbed Old Buzzard to its offerings at the Rocky Mount park. It also gave other parts of the trail network, which totals about 12 miles, a facelift.

While riding styles have changed, the trails at Waid Park had not, said parks and recreation director Paul Chapman.

“People are looking more for that rollercoaster type of experience on trails now,” he said. “We knew we had to improve our trails.”

While hikers, runners and horseback riders flock to Waid Park, there wasn’t much use by mountain bikers, said county outdoor recreation manager Matt Ross. He hopes the Old Buzzard trail will change that.

“We’ve seen a tremendous amount of interest in it and it’s so good because it’s bringing a lot of new users into the park,” Ross said.

Ross said the Old Buzzard trail cost about $2,000 to build. Help from volunteers, and the fact that machinery rented for another project could also be used for the trail work helped to keep costs low.

The trail was dubbed Old Buzzard because it runs alongside an old, picturesque barn, where crews working on the trail always saw buzzards hanging out, Chapman said.

Ross described a jumpline trail as “a dirt rollercoaster.”

The trail is progressive, Ross said, in that less experienced mountain bikers can take it slow, rolling along without pedaling, while those with more practice can ride it fast and get air on the jumps.

Mountain biking trails have a rating system similar to ski slopes, Ross said, noting that the Old Buzzard trail is classified as a black diamond. Intermediate riders should be able to handle it, he said, but it will be a real thrill for skilled riders.

Michael Carnrike was involved in building both trails. He said Morningside Park is a great place for bikers making the transition from pavement to dirt, whereas riders should have some mountain biking experience before trying out Old Buzzard in Waid Park.

Although the grand opening of Old Buzzard trail is set for June 1, it’s already open to the public. Carnrike said he recently invited a group out to the trail that included riders over 50 and under 10, of varying skill levels. He said they all gave positive reviews.

The new Franklin County trail is unique to the region, Ross said.

“It’s providing a style of riding that is hard to get anywhere other than at ski slopes,” he said.

Carnrike said cyclists would have to drive several hours to find anything remotely similar to Old Buzzard trail, a smooth surface with 15 jumps in a row.

Mountain biking has been growing in popularity for several years now, Carnrike said, and can be a big draw for tourists.

It’s something regional tourism group Visit Virginia’s Blue Ridge has emphasized in its new “Be a #Trailsetter” campaign. The region was recognized last year by the International Mountain Bicycling Association as a silver-level ride center, the only one on the East Coast.

Ross said he hopes to develop even more mountain biking trails within Waid Park and elsewhere in Franklin County.

What: There will be a high jump competition, gear giveaways and light refreshments

It dips and dives, banks and turns, unfolding with a fast-flowing rhythm that allows riders to glide across its curves.

On the Old Buzzard trail in Waid Park outside Rocky Mount, experienced riders can catch air on the quarter-mile stretch with 15 jumps. Other riders can roll along without pedaling to experience the roller coaster effect.