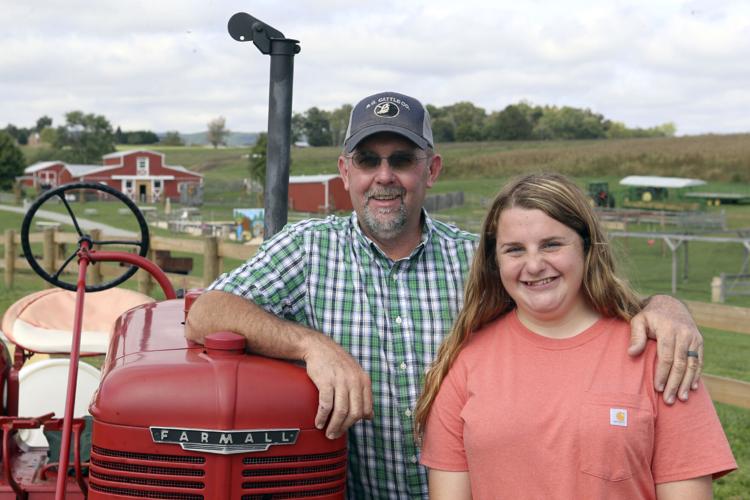 Mike Jones and his niece Kaitlyn Davis, 16, of Thornspring Pastures in Pulaski County. 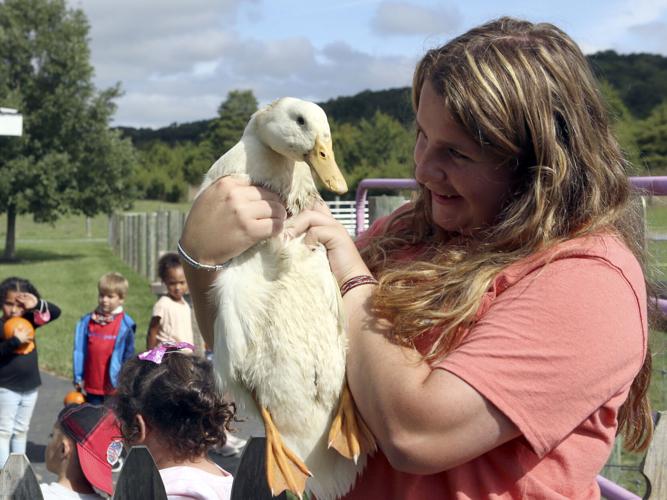 Kaitlyn Davis holds a duck that she has raised from a chick. In addition to ducks, the farm petting zoo has pigmy goats, calves, sheep and a donkey. 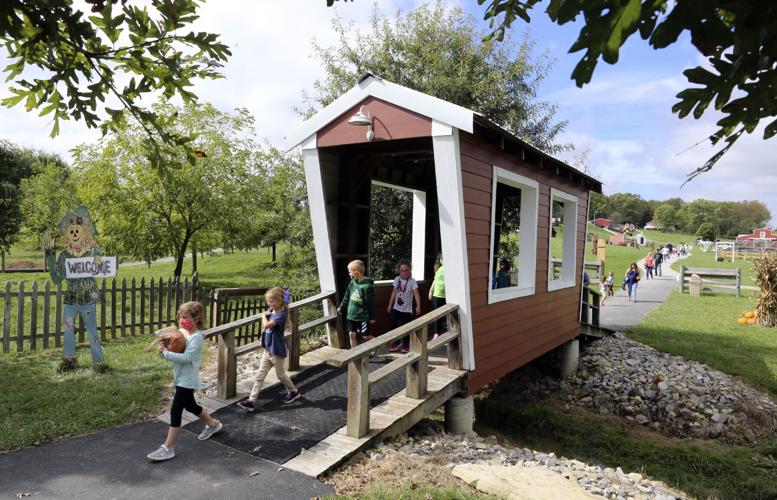 Thornspring Pastures “agritainment” draws up to 3,000 visitors a year. 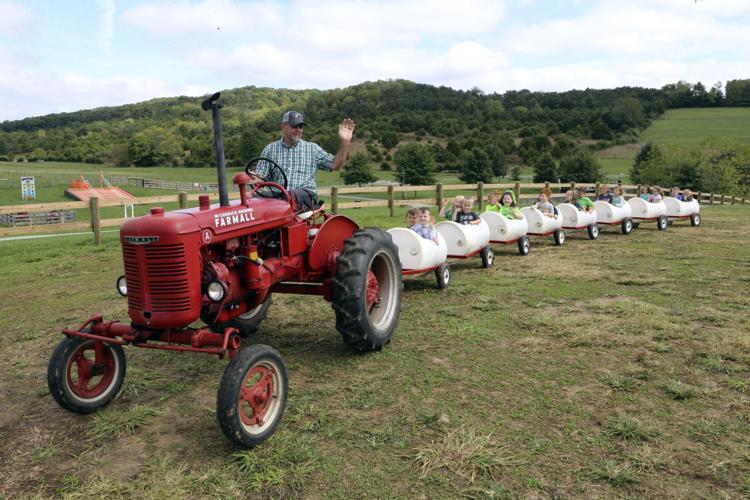 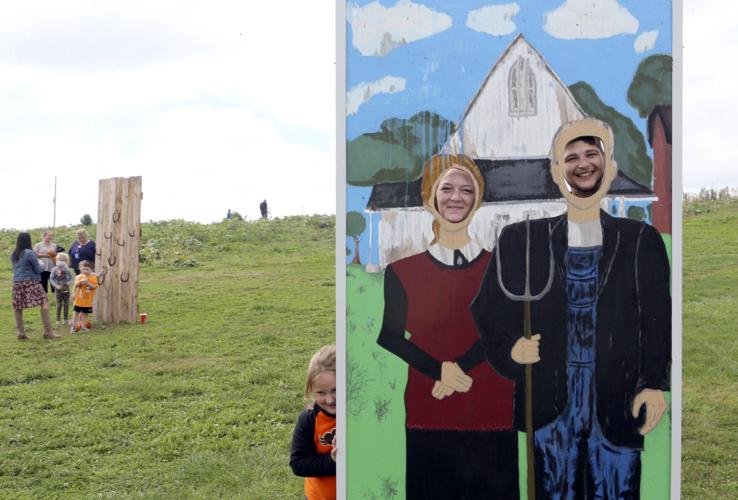 Justine and Devin Perdue pose for a photograph while their daughter Jayah peeks around the corner. The farm boasts family fun attractions for all ages. 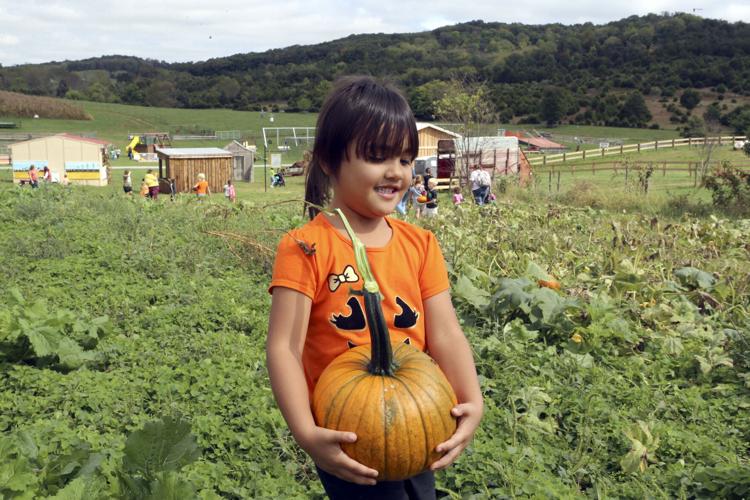 Carmen Sutphin, 5, found the perfect pumpkin to go along with her pumpkin- themed shirt in the farm's pick-your-own patch. 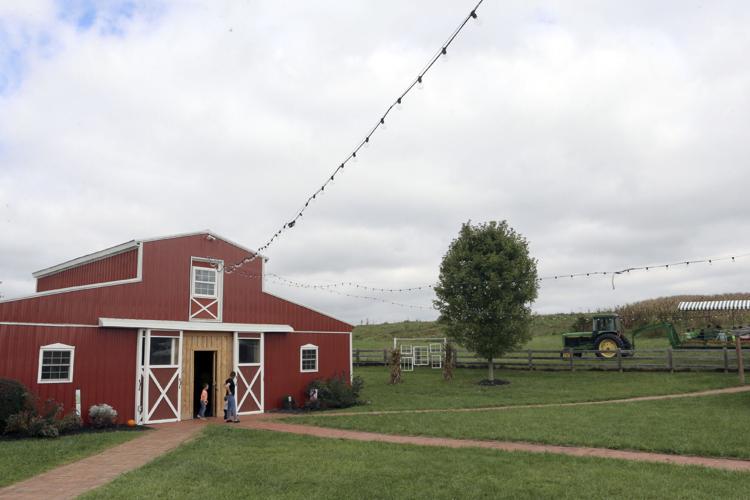 Mike Jones built 11 structures on the festival site with help from family and friends, including a barn venue for hosting weddings, reunions, company gatherings, and parties. 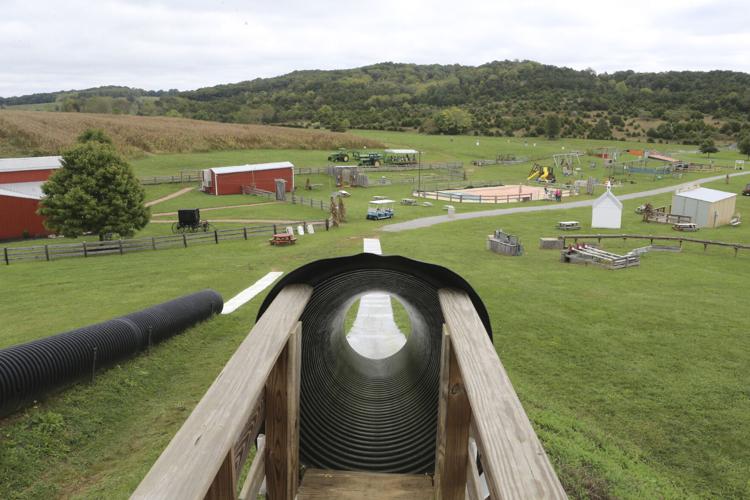 PULASKI – The first sign Thornspring Pastures isn’t your ordinary farm is the laughter.

Sure, the expected bovine mooing greets visitors at the gate of this Pulaski County farm. But this time of year they hear laughter and whooping too, as kids bounce on the farm’s house-sized pillow, plunge downhill on chutes, and roll on the giant gerbil wheel.

Thornspring’s Farm Fest, held weekends through Oct. 30, also features a giant slingshot, wagon rides, a corn maze, and a pick-your-own pumpkin patch. This is a real working farm with beef cows, sheep, pigs, chickens, ducks, and donkeys, but on Saturdays and Sundays in September and October, it’s devoted to fun.

Families dart between putt-putt golf and the petting zoo, sandbox excavators and barnyard volleyball. Kids and adults mine for gems in a sluice (five worthy stones guaranteed), get their faces painted, and feed the goats. People of all ages enjoy the steam engine demos, blacksmithing, and skills games. Thornspring Pastures offers so much to do, most of it in the open air.

Owners Mike and Tina Jones buy a few of the structures and pieces of equipment outright; the rest they adapt from farm machinery and implements. Mike has created a kid-sized railroad with carts fashioned from feed barrels as well as a baseball throwing gallery in a silage trailer. The grounds are dotted with several ball-in-the-hole dexterity games made from wooden barrels and a horseshoe-studded pallet tower challenges those with good aim. Basketball hoops hang from farm wagons and playground equipment is fitted with tractor seats.

The son of a contractor, Mike Jones said he started buying land for his farm when he was 18. With help from family and friends, he built all 11 structures on the festival site, including the main gathering spot – a barn, of course. Weddings, reunions, company gatherings, and parties can be held here spring through fall. Because of COVID, many of the events have been held outside this year.

“I’ve almost lost count of how many activities we have here – 36 last I checked,” Jones said. “My niece, Kaitlyn, is the person who comes up with the ideas. She’ll say, ‘We need this,’ and we’ll figure out how to do it.”

The Joneses were thinking of Kaitlyn and her sister Haley when they planned the feature that eventually led to Farm Fest, more than a dozen years ago. They thought the little girls would like a corn maze, so they planned on putting in a field of corn. But when corn planting season came around, Mike Jones’ father had just died and his mother was in the intensive care unit with a serious medical condition.

“Mom did recover,” Jones said. “One day she looked at me and asked if I’d gotten my corn planted. I was surprised she remembered that plan. ‘No, my heart isn’t in it,’ I told her. She said I needed to get those seeds planted. ‘You know your father would want you to do what you said you were going to do,’ she told me. So I did plant them. That was the beginning.”

Tina and Mike Jones started thinking about how nice it would be if more kids could come out to the farm with their families. They liked the idea of youngsters having a day free of worries and problems, a day of making good memories. They started adding activities to the farm – a hay ride, a chance to feed farm animals, a tiny tractor pull. Their nieces chimed in with ideas. Kaitlyn wanted a “build a bear” workshop on teddy bears, but not as expensive as the mall. They created a special building for that and added several more stuffed animals to the mix.

The farm’s “agritainment” component draws maybe 3,000 visitors a year. Jones doesn’t keep track of the numbers and says he’s not making a profit yet, but he estimates 300 visitors on good days. While some small farmers supplement their income through visitor activities, the Joneses think of the festival as the chance to offer a good time to friends and neighbors in New River Valley.

Each year the slate of activities grows. Now there’s a nighttime drama, Blood Trail, developed by several local churches. Food vendors sell coffee, hot chocolate, snow cones, pork rinds, and other snacks. Every weekend local people show up saying they just found out about the festival, even though it has been going in some form for a decade.

Thornspring built its reputation on its Simmental cattle and grass-fed beef. Mike Jones still makes his income from selling beef and pork directly to consumers from his home in the Chicwood subdivision off Thornspring Road. He offers a variety of meat packages, ranging from a section of a cow to individual cuts. Tina Jones works off the farm in sales at Salem Stone.

“I love people, but I’m terrible at marketing,” Mike Jones said. “It just makes me happy to see all these kids having a good time.”

Thornspring Farm Festival runs every Saturday and Sunday through Oct. 30, 11 a.m. to 5 p.m. Saturdays and 1 to 5 p.m. Sundays. Admission is $9 per person, with children under 3 free. The Blood Trail drama for ages 12 and up is presented at 7 p.m. on Oct. 22 and Saturday, Oct. 23. Admission is $5. Thornspring Pastures Farm is located at 5090 Thornspring Road in Pulaski, a 1/4 mile on the right after Cougar Xpress.

Residential and commercial customers in southwest Roanoke city and county lost connectivity Tuesday and one local health care provider had to power up a backup system.

David Talmadge Carroll was being held in the New River Valley Regional Jail.

No public threat from hepatitis A case at Roanoke restaurant

Meanwhile, victims of an earlier hepatitis outbreak at several Famous Anthony's restaurant locations continue to pursue a court ruling on payments from an insurer.

Sunday's incident represents 2022's forth and fifth handguns to be confiscated at the Roanoke Blacksburg Regional Airport. Six is the current record high for handguns seized at the airport during a calendar year.

A police investigation of the incident is underway, the statement added.

Hollins grad is finding a way to earn success

Now concluding a hard-working stint at Hollins University, Emma Thomas says she is ready to strive for new challenges after she graduates this…

US to fly in baby formula on military contracted jets

Mike Jones and his niece Kaitlyn Davis, 16, of Thornspring Pastures in Pulaski County.

Kaitlyn Davis holds a duck that she has raised from a chick. In addition to ducks, the farm petting zoo has pigmy goats, calves, sheep and a donkey.

Thornspring Pastures “agritainment” draws up to 3,000 visitors a year.

Justine and Devin Perdue pose for a photograph while their daughter Jayah peeks around the corner. The farm boasts family fun attractions for all ages.

Carmen Sutphin, 5, found the perfect pumpkin to go along with her pumpkin- themed shirt in the farm's pick-your-own patch.

Mike Jones built 11 structures on the festival site with help from family and friends, including a barn venue for hosting weddings, reunions, company gatherings, and parties.