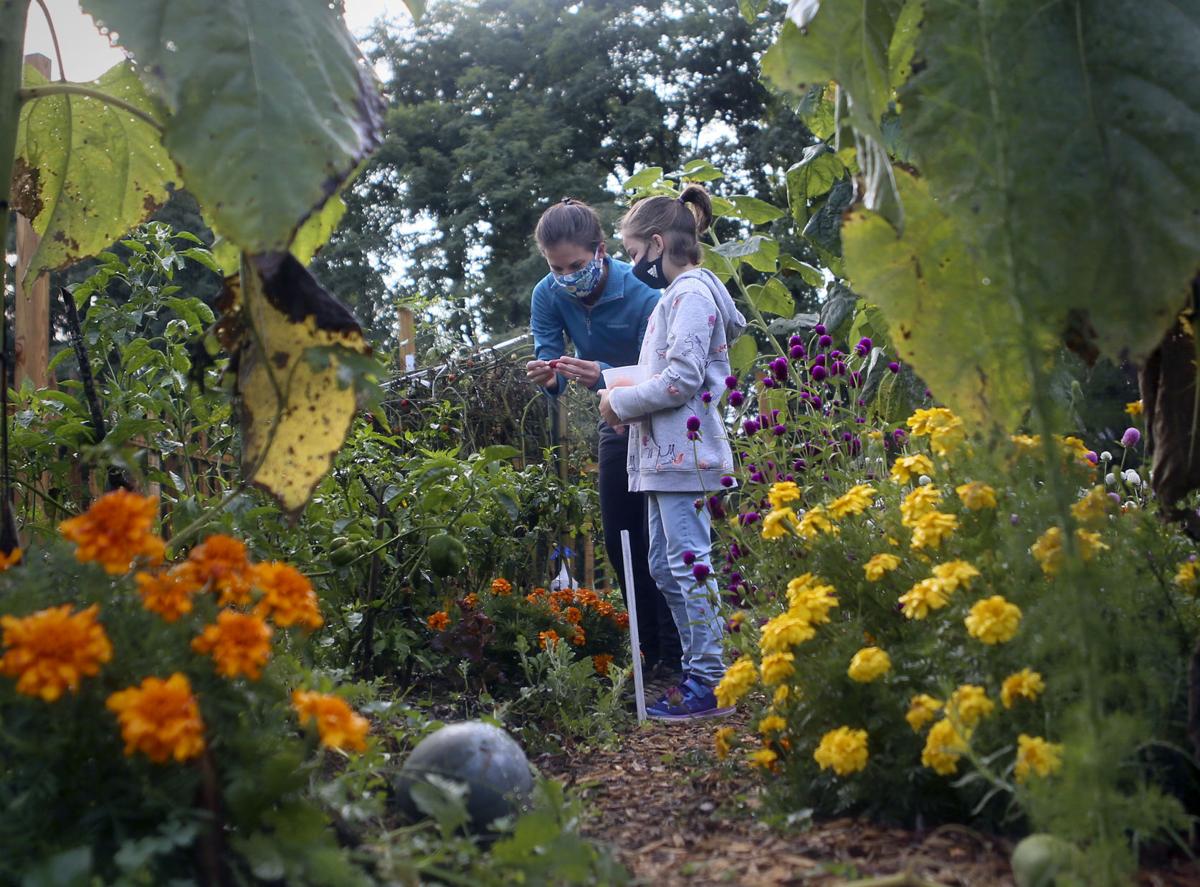 Marian Brown and her daughter Gee Gee, 10, harvest vegetables from their Wong Park Community Garden. Marian Brown said their first time garden plot was a fun and rewarding activity for her family of four during the ongoing pandemic. 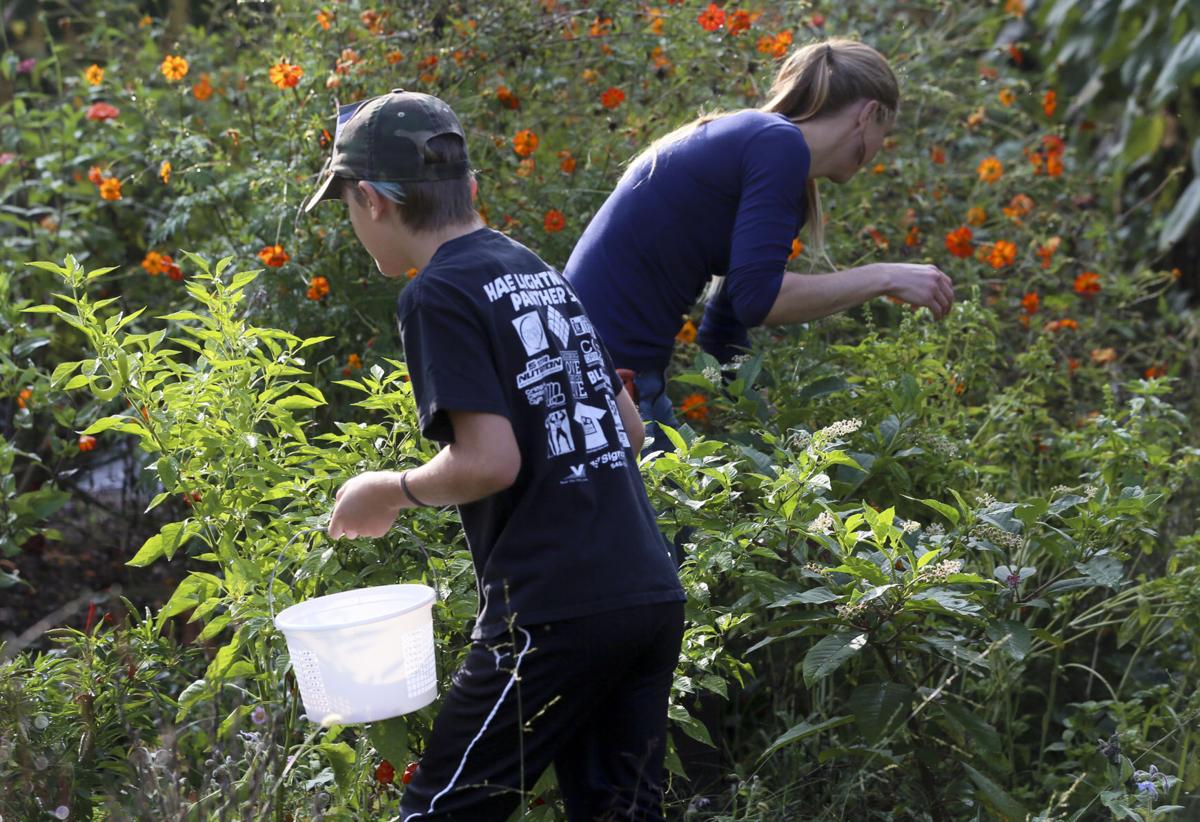 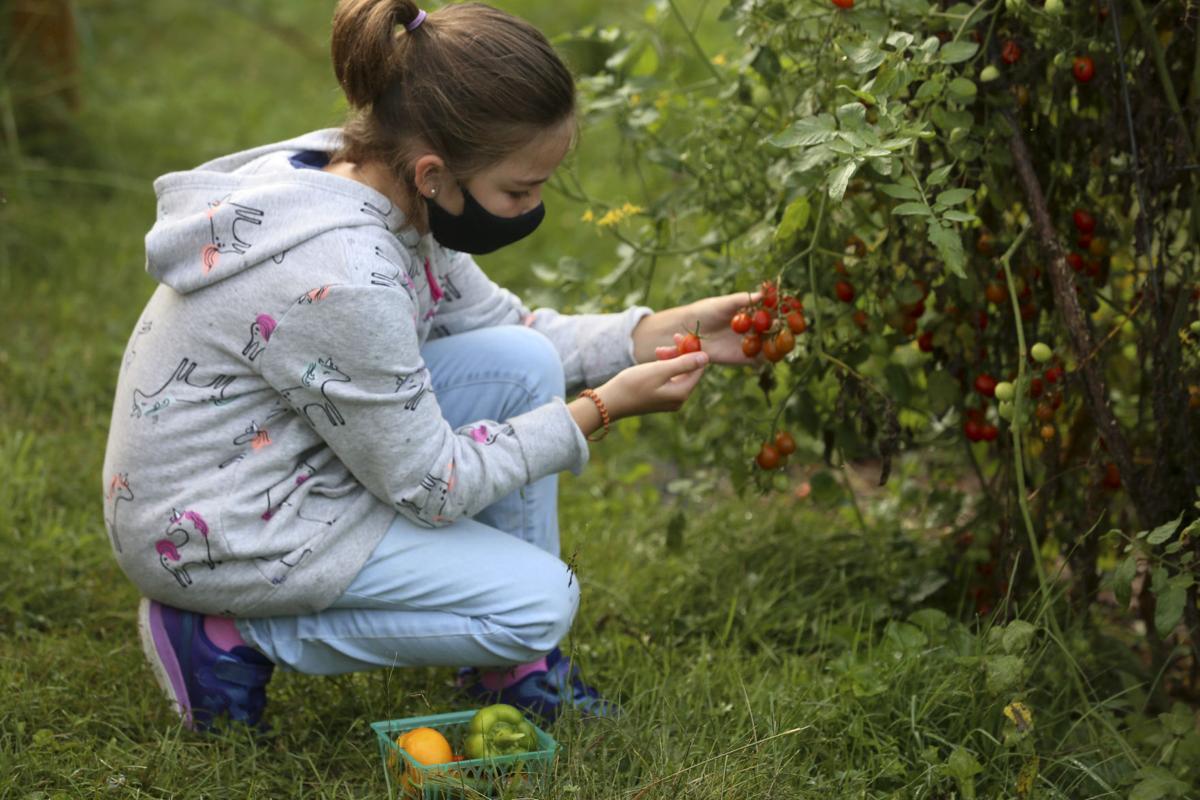 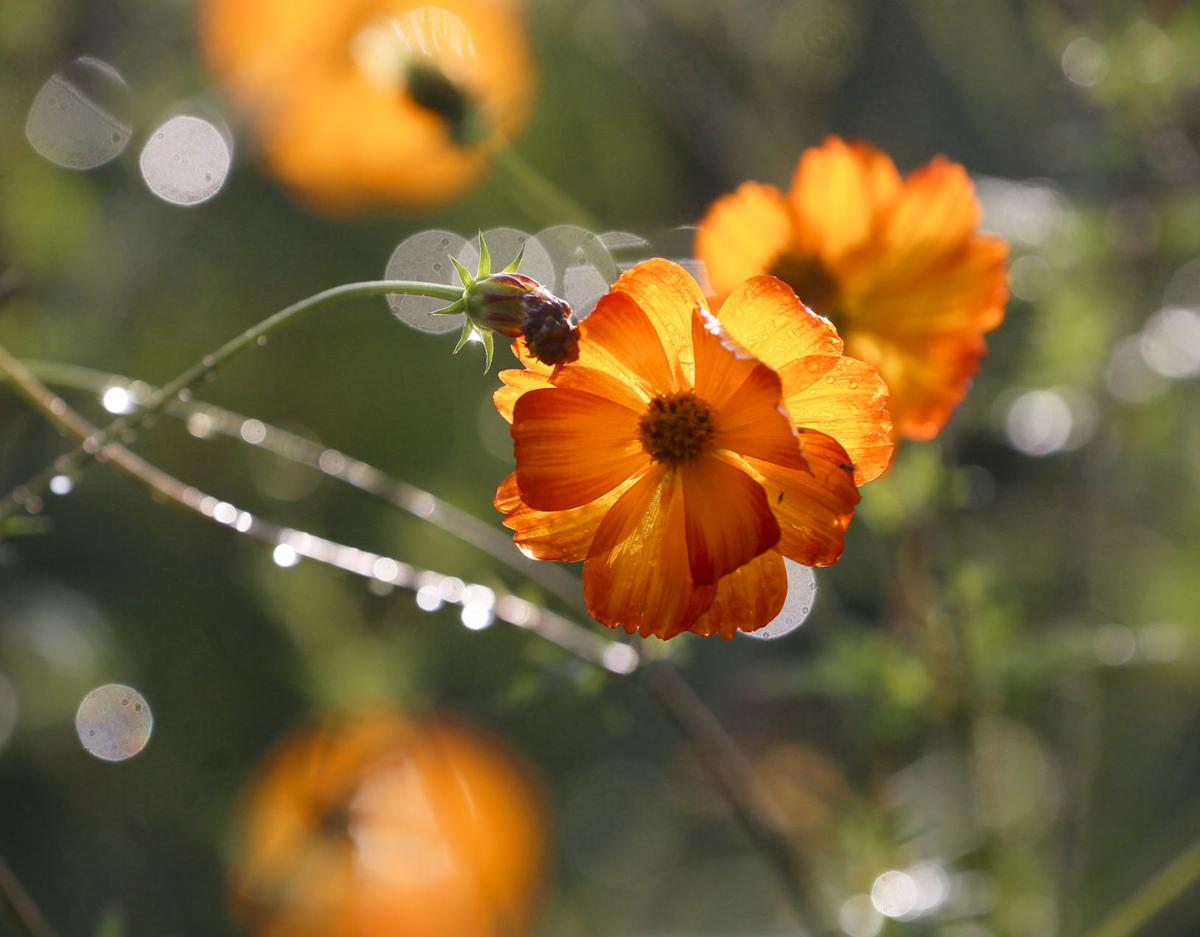 The garden is operated by Live, Work, Eat, Gather, Inc., a nonprofit organization, under contract with the town of Blacksburg. 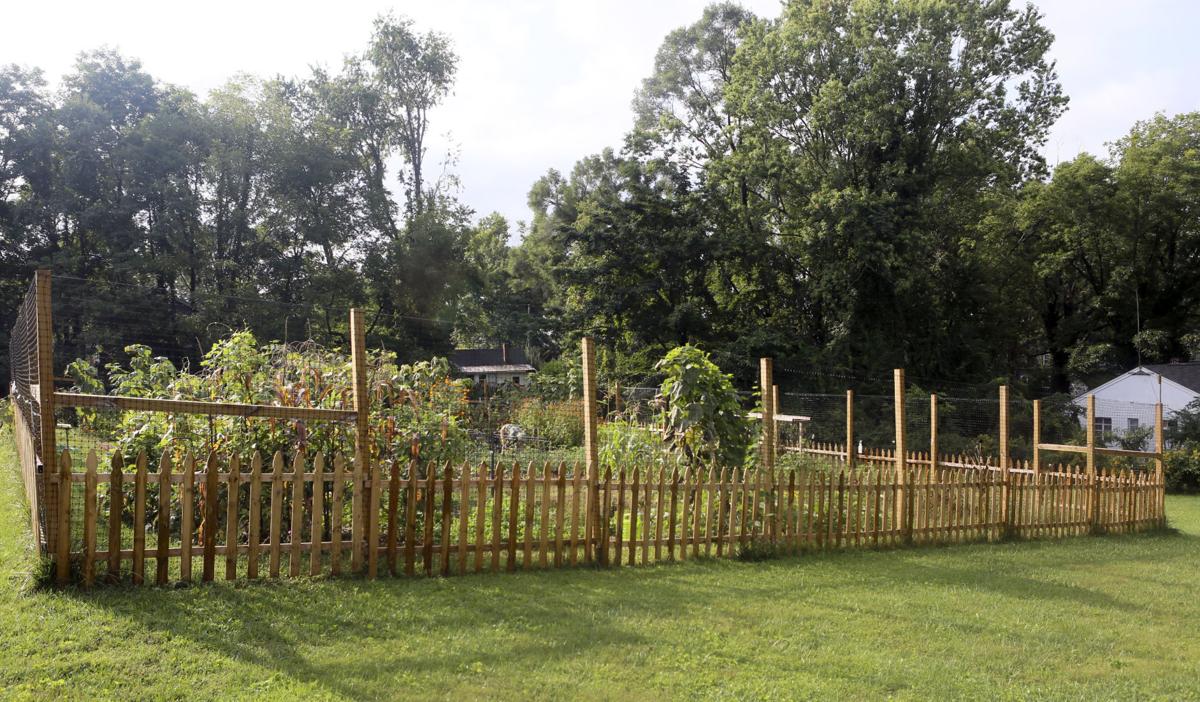 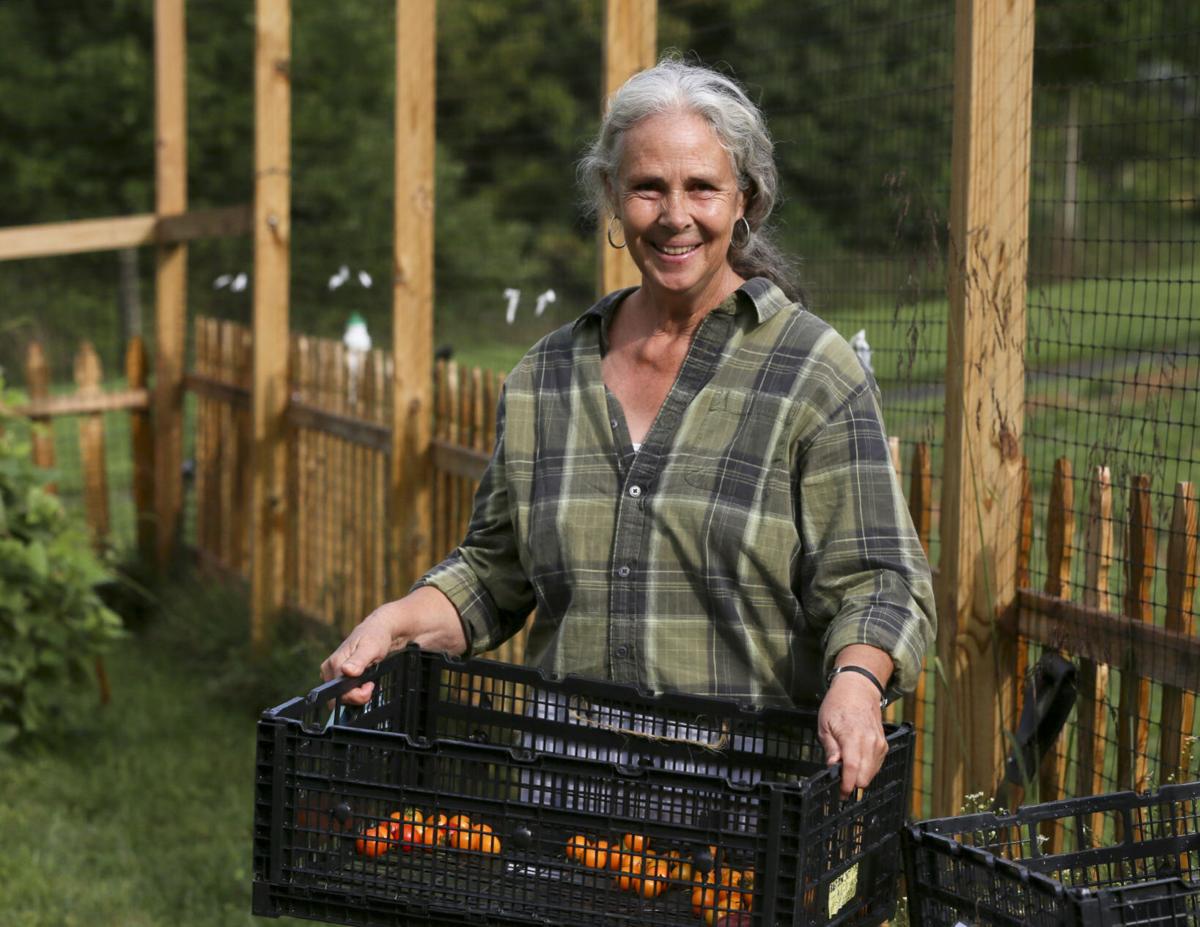 Jenny Schwanke is the part-time garden coordinator for the gardens.

BLACKSBURG — This year of COVID-19 has been a good time for community gardening, says Marian Brown.

With her daughter, Gee Gee, Brown has cultivated a flourishing plot of flowers, peppers, melons, and other vegetables at Blacksburg’s new Wong Park Community Garden. They’ve dug out rocks, hauled in rich topsoil and earthworms, planted, weeded, and harvested, all the while making new friends – at social distance in the open air.

“Because of the virus, we have time to dedicate to gardening. No travel plans this year,” Brown said. “We enjoy being around people in a safe way. We especially enjoyed getting to know two student gardeners who stayed here for the summer. They had worked on a farm, and we learned so much from them.”

Jenny Schwanke, who coordinates Blacksburg’s Wong Park and Hale community gardens, says the town has never had a shortage of people who want to grow food. The Hale’s 70 plots and the 15 plots at new Wong Park rented quickly in late February, with a waiting list of 17.

Jim Graham, coordinator of Radford’s riverside garden, saw many more applicants in March 2020 than in preceding years, probably because people wanted alternative ways to get food, he said. The size of waiting list for the 42-plot garden has Graham considering adding plots.

“In Blacksburg Community Gardens, what’s different is kids; more kids have been helping,” Schwanke said. “Also more people were gardening in the morning rather than being in the office or lab.”

Jenny Law and her teenage son, Omid, have been experimenting with some unusual plants at the Wong garden – peanuts and a maypop vine. Omid is especially enthusiastic about his hot peppers – ghost peppers with a piquancy so searing they’re barely edible.

“I like growing flowers too. They make the garden brighter, but they’ve kind of exploded,” he said, pointing to a giant cosmos billowing over his peppers.

During the pandemic, Blacksburg’s community gardeners are required to wear masks, maintain six feet of social distance from other gardeners, and disinfect their hands when using the water hose. At the Radford garden, where more than four people in the garden is a rarity, no official rules were enacted.

In Blacksburg’s Hale garden, the common tool shed was closed and gardeners brought their own implements. Also, there have been no garden orientation sessions, no educational speakers, and no potlucks at the gardens this year.

Matt Nottingham, a longtime gardener, says the communal suppers were at the top of his reasons for renting a plot at the Hale Garden.

“But even without the potlucks, I like the sense of getting out and going to a different place rather than working the home garden all the time,” he said. “Brenda [his partner] and I like seeing people we’ve come to know in the garden over the years. There’s a real sense of community here.”

Jenny Law of the Wong garden agrees. She remembers the rainy day she and other gardeners created an impromptu workday, pitching in to help Schwanke spread mulch on garden pathways. The endeavor involved several borrowed wheelbarrows, shovels, and food, all the while maintaining social distance.

“What’s great about the small size of this garden is when something needs to be done, it feels like it’s our responsibility to do it,” she said.

Turning plots of land into productive social hubs is just one of the benefits of community gardening. Community gardeners with a shared passion for fresh organic produce work together to share knowledge and reduce family food expenditures. Some say digging in the garden is uplifting. In fact, a recent British study showed that people who gardened at least an hour a week had lower body mass indexes as well as lower levels of stress.

Just looking at the lush oasis of blossoming, growing things – rainbow chard, peppers, squash, sunflowers, and fruit-laden tomato vines the size of Christmas trees – imparts a healthy dose of nature therapy. Some plots overflow with zinnias, marigolds and other flowers, which might seem like a decadent waste of space in a small plot. But Schwanke says they can increase yield by attracting pollinators for the vegetables as well as deterring some pesky bugs.

At Blacksburg’s community gardens, gardeners must agree to avoid the use of chemical pesticides and herbicides as they hurt pollinators. At Hale, many of these pollinators live in honey bee hives on the property. Graham, at the Radford garden, said they have no requirement to grow things organically, but he seldom uses any chemicals.

Both Radford and Blacksburg gardens are fenced and have water sources with hoses. In addition to the main garden and hives, 11-year-old Hale garden harbors a small apple orchard, a greenhouse, and an asparagus patch that members may harvest. Both Blacksburg community gardens have herb gardens for members’ use.

“I’d like to see community gardening in every neighborhood that could use one, especially in rental areas,” Schwanke said.

In addition to the Hale and Wong park gardens, Blacksburg has the independently created Airport Acres community garden on land rented from the Virginia Tech/Montgomery County Airport, Schwanke said.

More community gardens are probably in Blacksburg’s future. The Hale and Wong Park gardens are programs of Live, Work, Eat, Gather, Inc., an organization with a mission to cultivate community through the support of local food and the gathering of neighbors, among other objectives.

Both Blacksburg and Radford community gardeners give back to the community, in the form of produce to food pantries. Gardener Matt Dhillon takes Wong Park garden donations to the Southpaw mutual aid organization in Blacksburg, and other gardeners donate to the Interfaith Food Pantry. In Radford individuals contribute produce to the Daily Bread soup kitchen.

Donald Lee Woolwine III pleaded no contest to counts of assault and battery and sexual abuse, both misdemeanors, and received a total of two years, suspended after 12 months.

From the moment Dr. Cynthia Morrow’s mother heard that older people were eligible to get the COVID-19 vaccine in the Roanoke Valley, she’s lob…

Marian Brown and her daughter Gee Gee, 10, harvest vegetables from their Wong Park Community Garden. Marian Brown said their first time garden plot was a fun and rewarding activity for her family of four during the ongoing pandemic.

The garden is operated by Live, Work, Eat, Gather, Inc., a nonprofit organization, under contract with the town of Blacksburg.

Jenny Schwanke is the part-time garden coordinator for the gardens.