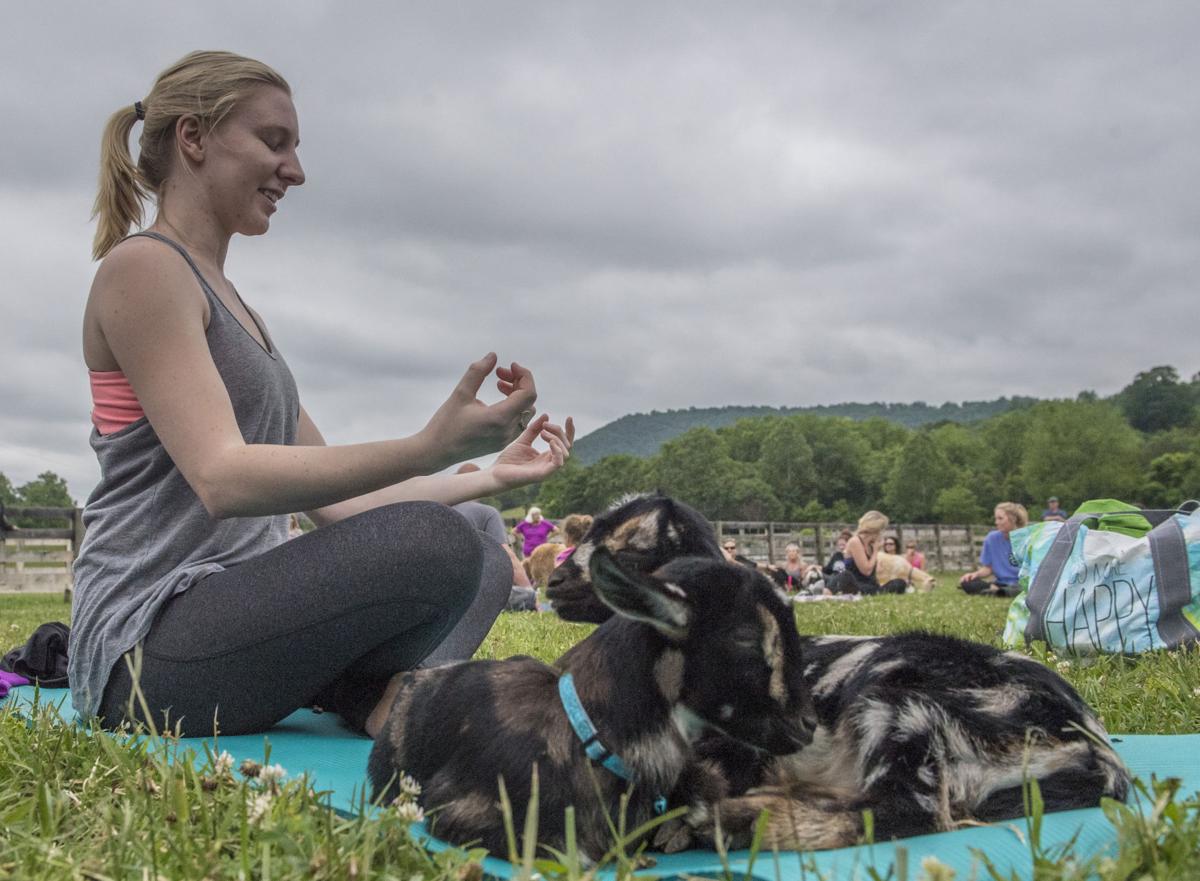 Robyn Lewis meditates with her new friends, a pair of baby goats, while taking a yoga class at New Freedom Farm in Buchanan on Sunday. 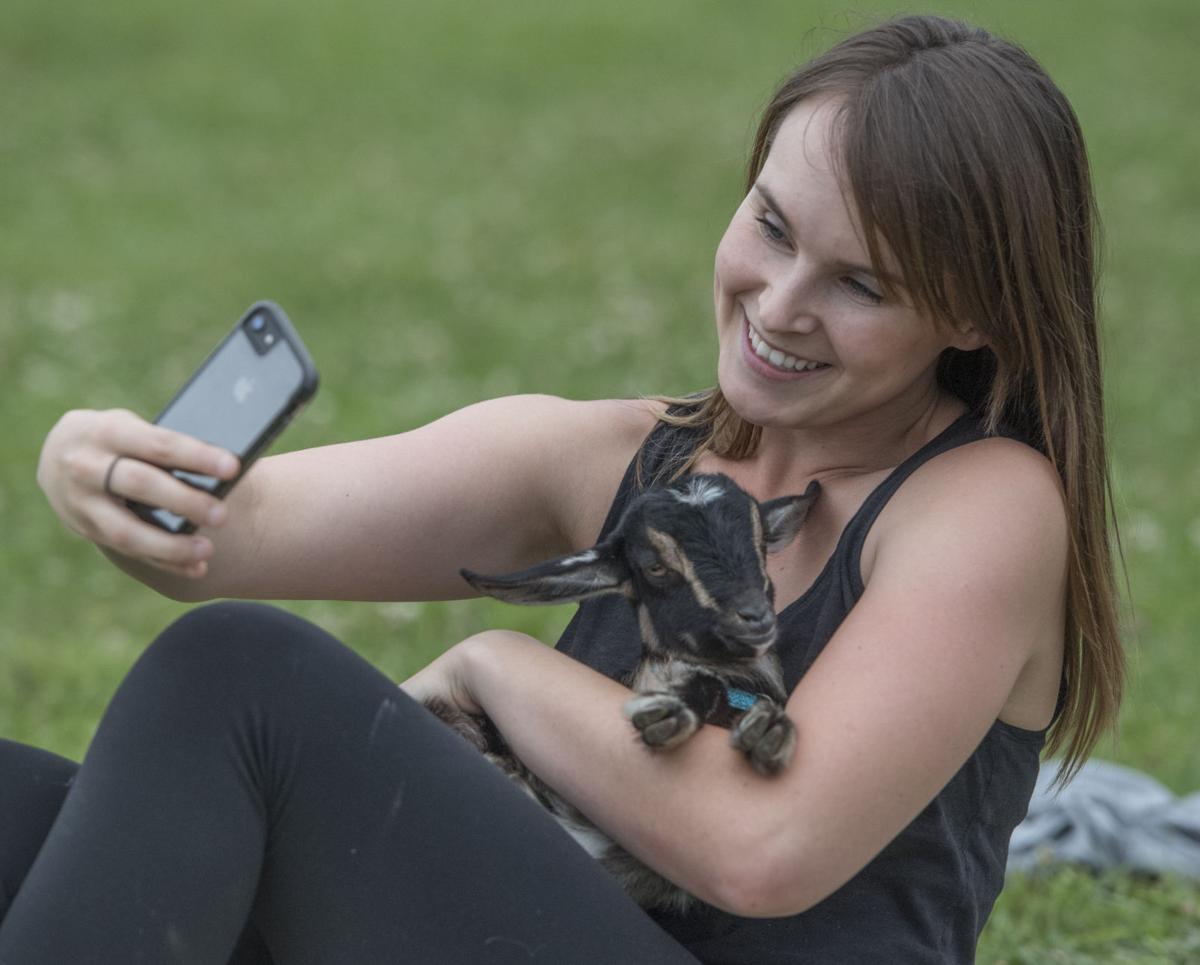 Julia Nash of Roanoke gets a selfie with her yoga partner at New Freedom Farm after a class to raise money for the nonprofit farm in Buchanan on Sunday afternoon.

When Ella Stulce moved to shift into a warrior pose Sunday, she found herself sharing her yoga mat with two curious interlopers: a pair of fuzzy, brown-and-white speckled baby goats causally grazing at her feet.

“They’re just so sweet and little,” Stulce, 14, said of the diminutive goats that were exploring the field where 40 people had gathered for an outdoor yoga class.

The class, which was also a fundraiser for the therapeutic New Freedom Farm in Buchanan, capitalized on the cuddly new goat yoga craze that has been sweeping the nation.

Started last summer at a farm in Oregon, goat yoga is a blend of meditation and animal life, with the hijinks of the roaming goats delighting the audience.

“It’s something interesting, and who doesn’t like goats, right?” said Shelly DuQuette as her husband cradled one of the tinier kids.

Sunday afternoon’s class, organized by a group of friends who adopted the name Goat Gurus, was held in a field at the New Freedom horse farm and offered a backdrop of mountain views.

The goats, a herd of about a dozen Nigerian dwarf goats ranging in age from 1 month to adults, occasionally meandered through people’s legs or interrupted a breathing exercise with a sharp burst of bleating — stirring up giggles among the class.

The setting offered the group a novel way to spend an afternoon outdoors and commune with the friendly farm life, said yoga instructor David Kish.

Hanging out with goats generates a different energy than the pets many have at home, he said.

“It’s good to get out into nature and breathe a different air,” Kish said.

The 40 slots offered for Sunday’s event sold out in less than two days. Nearly 30 others bought observer tickets that allowed them to share in the goat snuggling and join the lunch that followed.

Many said part of the draw for the event was that all proceeds would benefit the nonprofit farm.

Caring for horses can be a healing outlet that helps ease anxiety and build community, said owner Lois Fritz, a Navy veteran who speaks from personal experience.

The 13-acre farm also offers a peaceful refuge for those who now struggle in crowded environments.

Beth Culpepper, a Gulf War veteran who first came to the farm in January, described it as her safe haven.

“I don’t know where I’d be without this place,” she said. “It’s been amazing.”

Working with the horses has helped Culpepper find a new, calmer center. The horses themselves all but demand it, she said.

“You’ve got to settle down, because they feed off your energy,” Culpepper said. “If you’re not right, they’ll walk away from you.”

Goat Gurus member Kristen Terra, whose own farm in Montgomery County supplied Sunday’s goats, is also an occupational therapist at the Veterans Affairs Medical Center and has seen patients thrive at New Freedom.

“It’s been a really great community resource,” she said.

Sunday’s event was the first for Goat Gurus, but it is already making plans for more fundraisers later this year.

The New Freedom benefit raised around $1,400. Organizers made sure to set aside plenty of time for visitors to pet the goats and snap a few selfies.

Surveying the scene, Fritz marveled at the unlikeness of the goat-yoga combination.

“But I’m very grateful,” she added with a smile as she thanked the group for its support of New Freedom’s work.

To learn more about New Freedom Farm or Goat Gurus, visit them online.

Robyn Lewis meditates with her new friends, a pair of baby goats, while taking a yoga class at New Freedom Farm in Buchanan on Sunday.

Julia Nash of Roanoke gets a selfie with her yoga partner at New Freedom Farm after a class to raise money for the nonprofit farm in Buchanan on Sunday afternoon.