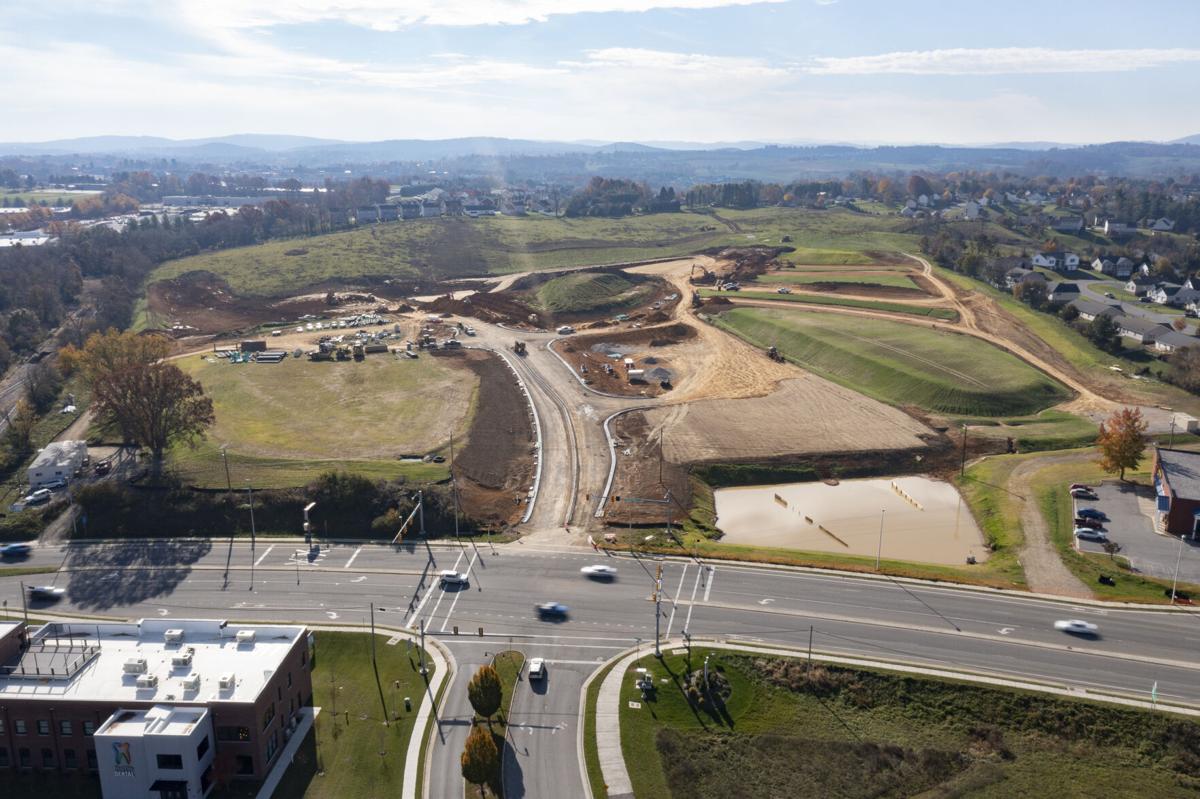 An aerial view of Signature Park, the Christiansburg project under construction at the intersection of Peppers Ferry Road and Quinn W. Stuart Boulevard. The 63-acre park will have four multi-purpose fields, dog parks, walking trails, and other features. 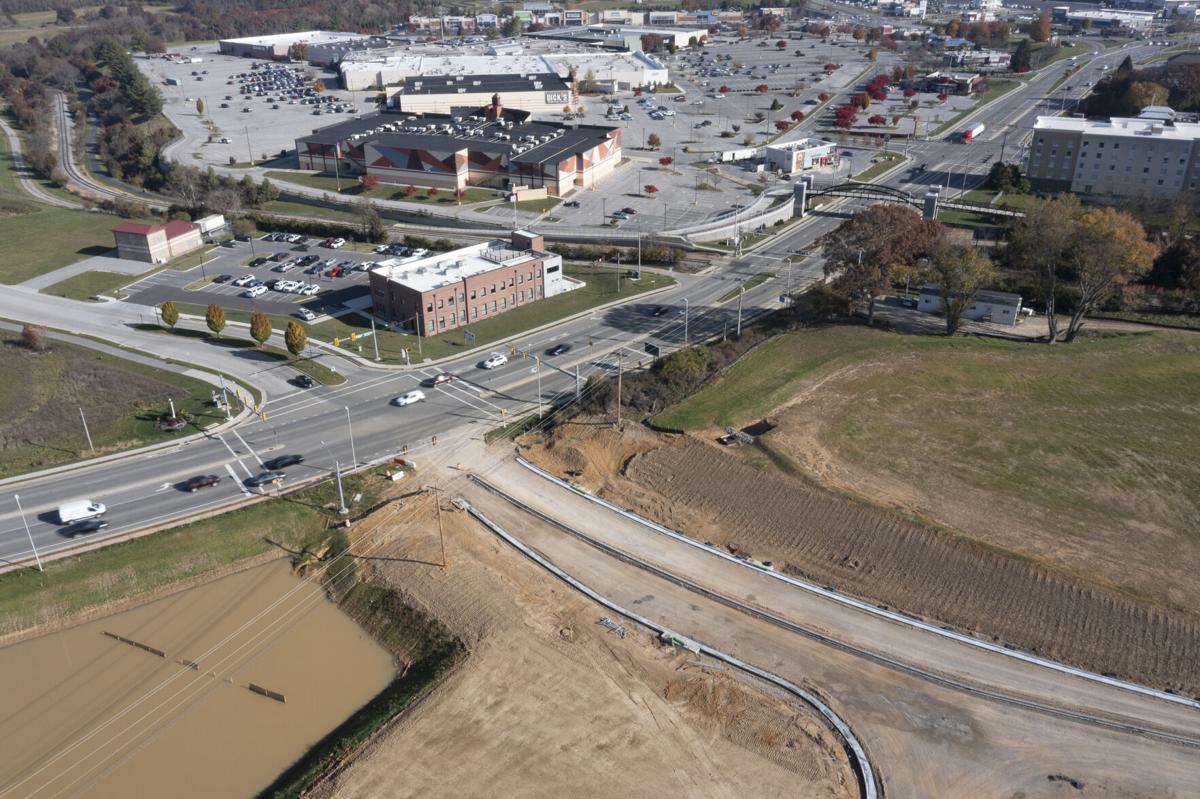 An aerial view of Signature Park at the intersection of Peppers Ferry Road and Quinn W. Stuart Blvd. shows the Uptown Christiansburg mall in the background. 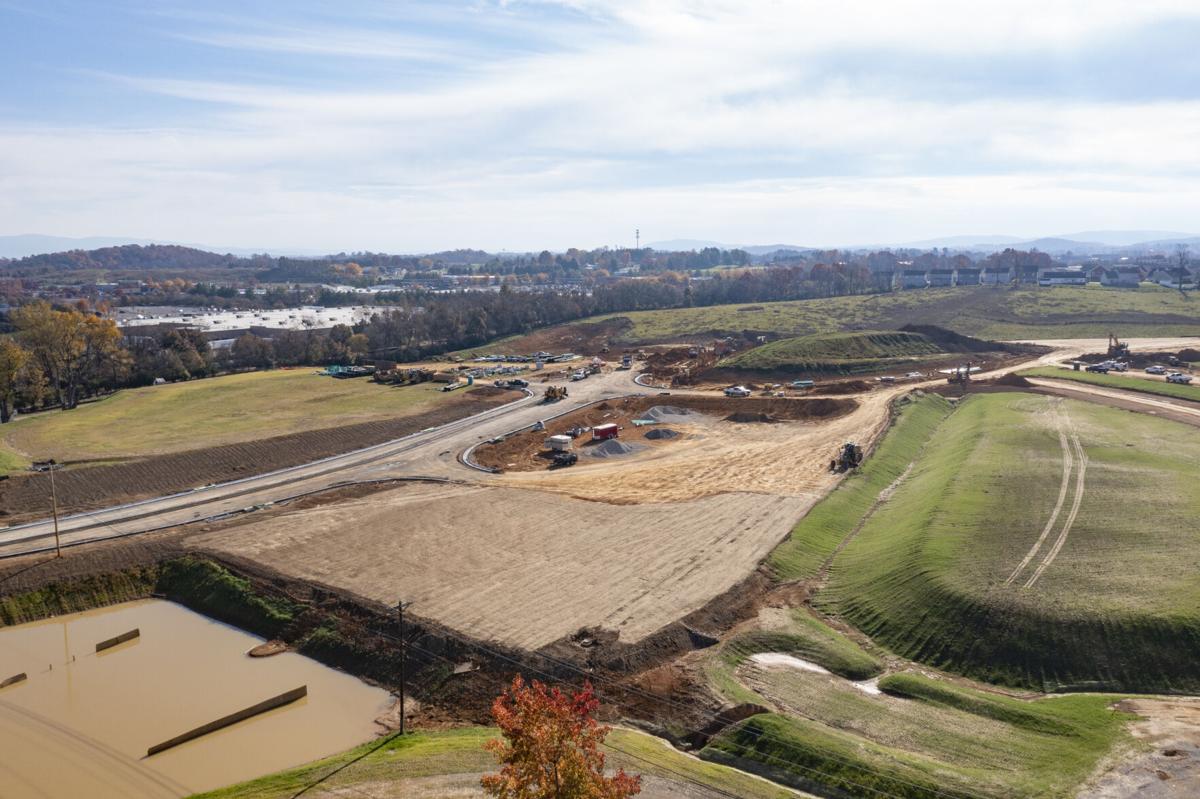 An aerial view of Signature Park under construction. 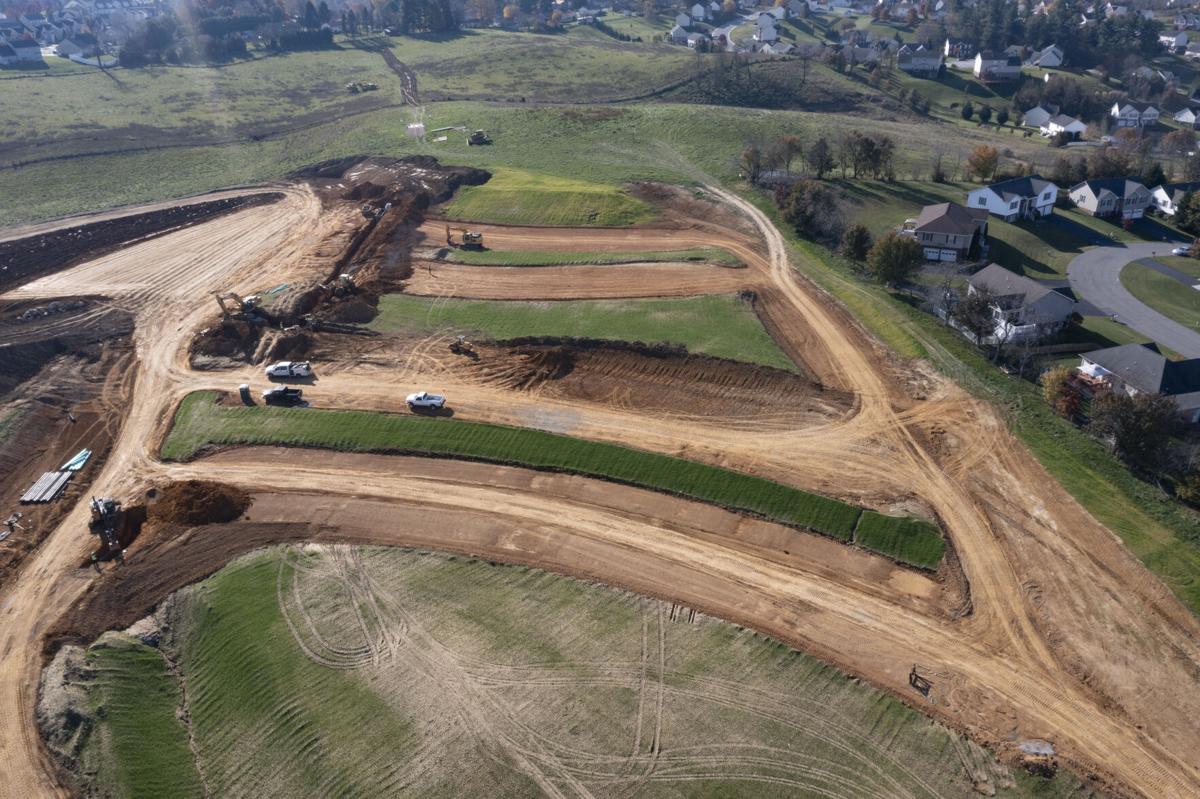 Construction crews work on the parking lot of Signature Park. 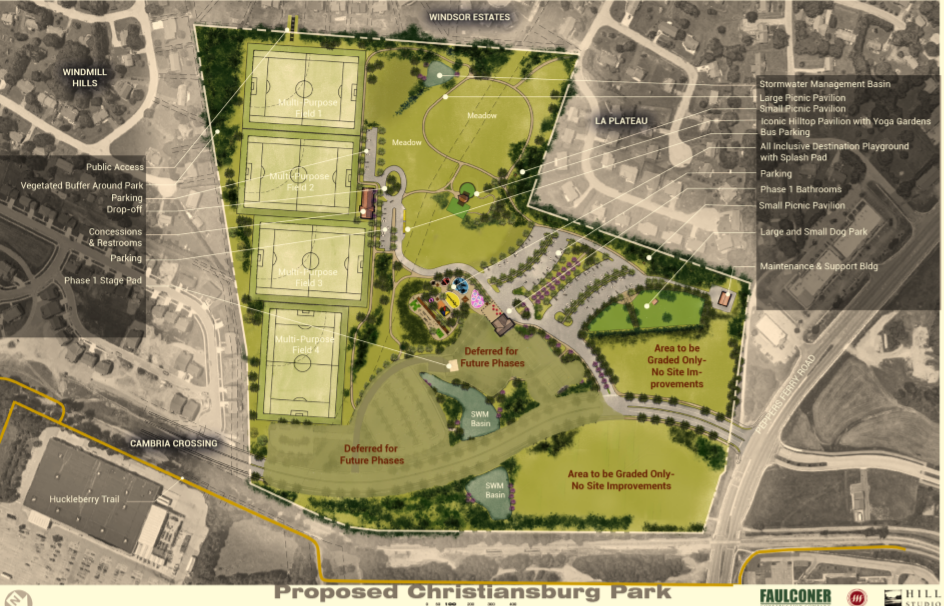 CHRISTIANSBURG — The Town Council has approved the $9.3 million debt that will help cover the cost of the multi-purpose Signature Park currently being built off of Peppers Ferry Road.

The debt, which council approved on a 5-1 vote this past week, is specifically a 15-year loan through JPMorgan Chase with an interest rate of just under 1.5%.

The measure marks just the latest step in the long-discussed plan to redevelop the 60 acres of land the town bought for $2.5 million in 2013.

The debt approved this past week is also just one of several ways the town is paying for a nearly $18 million project that will include athletic fields, an all-inclusive playground, splash pad and a dog park complex.

Supporters of the project anticipate it to be a key economic driver in the future, particularly in Christiansburg’s fast-growing northwest section.

“We have a lot of interest in those soccer fields already,” said Mayor Mike Barber. The project, “it’s a win, win.”

Barber said he recently heard from some people involved in the regional soccer scene who have talked about how the addition of more fields would help drive more tournaments to the area. The mayor said sporting events, including the swim meets that regularly occur at the town’s Aquatic Center, drive revenue for the town from people who use the occasions to dine at the town’s restaurants and shop at stores.

Barber said he expects at least a few of the park’s amenities to open within the next year.

After years of deliberations, town council formally moved the project forward about a year ago when it approved an agreement with Faulconer Construction Company.

In addition to the debt, other funding avenues for the project are grants, donations and reserve funds.

The development has so far been covered with reserve funds, Christiansburg officials said this past week.

Town Finance Director Valerie Tweedie told council members last week that they will be out of the reserve funds by the end of the month.

“So it is time to enter into the debt,” she said. “It is time to go forward with the debt, to continue with the construction of the park and meet our contractual obligations with Faulconer Construction.”

One particular aspect of the debt Tweedie highlighted was the interest rate, which she described as favorable to the town. She said she doesn’t foresee much lower rates than what they have been offered in relation to the park project.

“It’s almost like getting it for nothing,” Barber said of the rate.

Council members and town staff discussed other financial details of the project this past week, including the park’s anticipated annual costs.

Tweedie said the debt service payment is expected to be just under $700,000 a year.

Christiansburg officials, including Town Manager Randy Wingfield, also made a brief presentation on the park’s sponsorship structure. For example, businesses could individually sponsor specific amenities such as the all-inclusive playground for a set number of years.

Hicks has said in recent interviews that she’s not necessarily against the concept of the park. She has, however, raised general concerns about the project’s costs amid the still ongoing pandemic.

An aerial view of Signature Park, the Christiansburg project under construction at the intersection of Peppers Ferry Road and Quinn W. Stuart Boulevard. The 63-acre park will have four multi-purpose fields, dog parks, walking trails, and other features.

An aerial view of Signature Park at the intersection of Peppers Ferry Road and Quinn W. Stuart Blvd. shows the Uptown Christiansburg mall in the background.

An aerial view of Signature Park under construction.

Construction crews work on the parking lot of Signature Park.