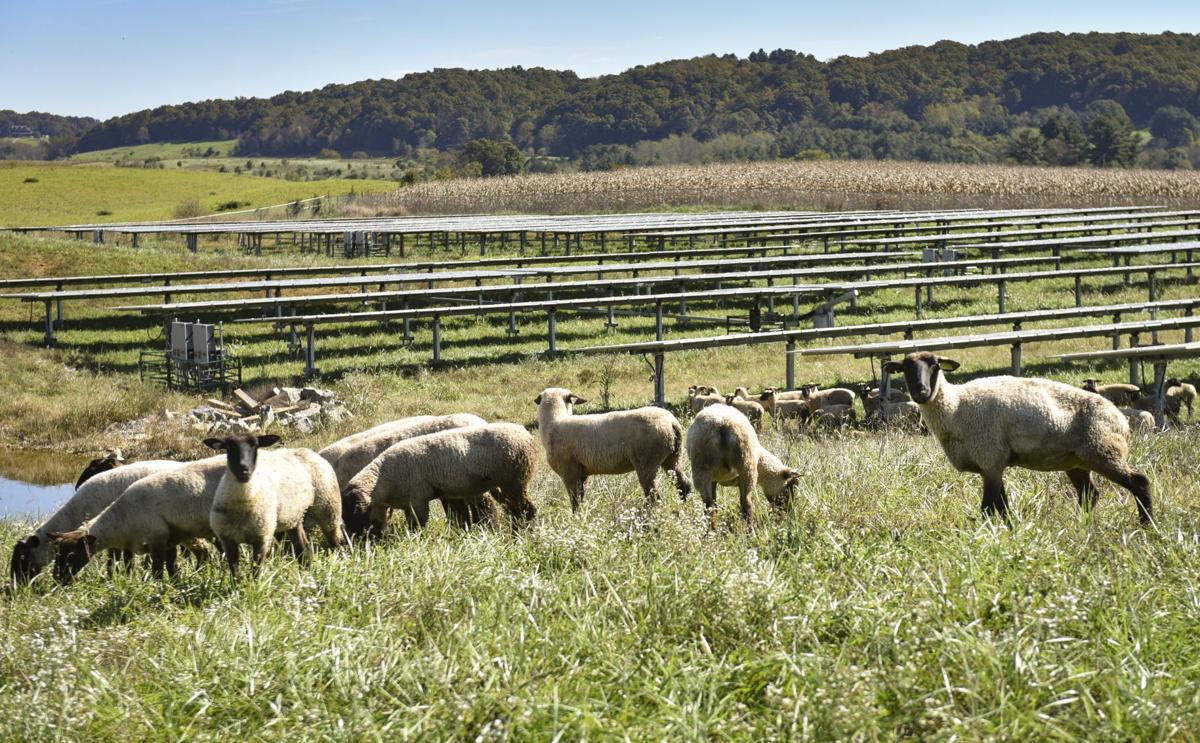 Sheep graze behind the Carilion New River Valley Medical Center—in between the hospital’s solar panels. A national company is proposing similar solar infrastructure — but on a much larger scale in Pulaski County — not too far from the medical center. 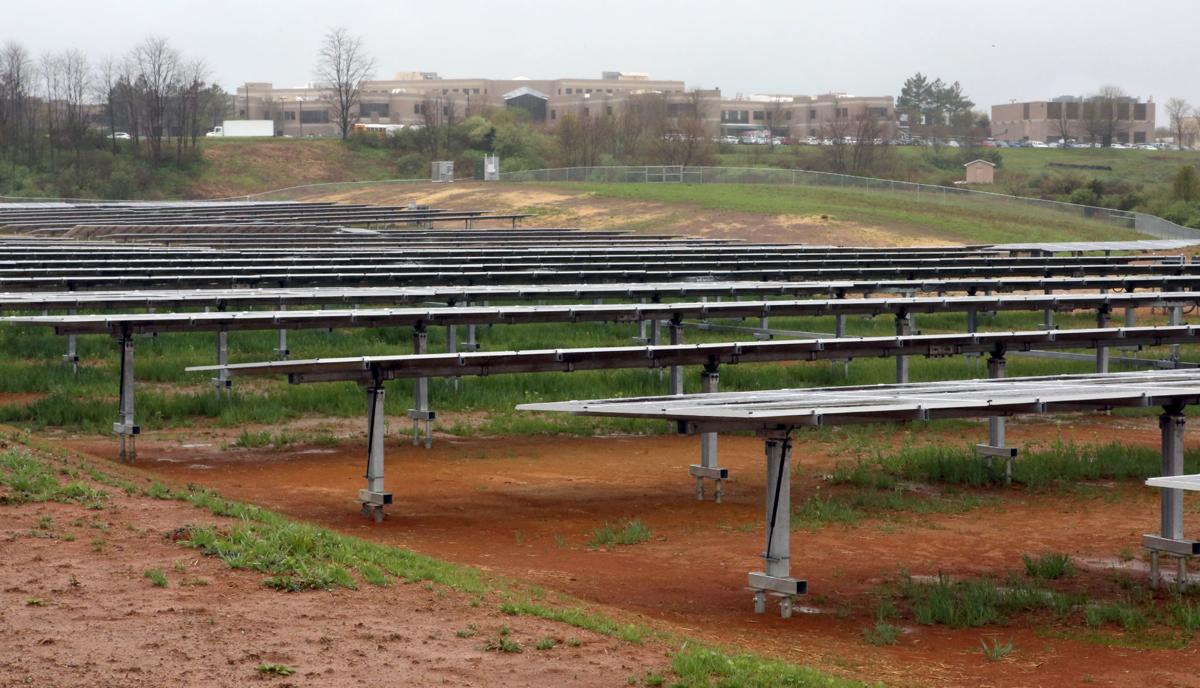 Carilion New River Valley Medical Center installed a solar panel array on seven acres of its campus outside of Radford. The panels are similar to what would be built by Hecate as part of a much larger project proposed in Pulaski County. 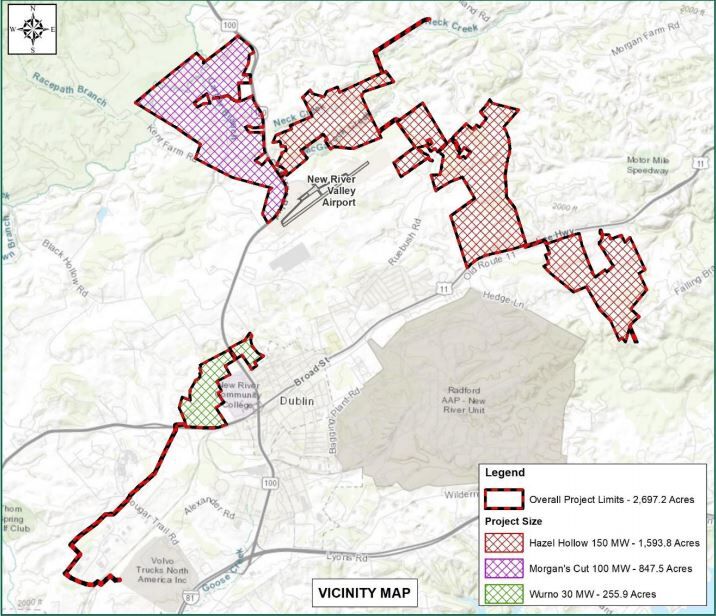 A map of the proposed Pulaski County solar project.

Pulaski County’s government year will begin with consideration of what would be the largest solar farm in Southwest Virginia — and one of the largest in the state.

Hecate Energy and its Virginia affiliate, AgriSunPower, have applied for a special use permit that would allow property owners in the county to lease their land to the Chicago-based company to build a solar farm capable of producing up to 300 megawatts of energy at its peak, enough to power approximately 57,000 homes, according to company spokesman Jay Poole. The project would encompass more than 2,000 acres near the New River Valley Airport and NRV Commerce Park.

There are more than 50 solar farms in use or being constructed throughout the state, according to the Virginia Department of Environmental Quality website. The website didn’t appear to show any larger than what is being proposed for Pulaski, but Poole said a 500 megawatt facility is planned for Spotsylvania County, as is 300 megawatt solar farm in Henrico County as part of an agreement with Facebook, which is constructing a new data center in the area.

While the Pulaski County project is big in scale for the state, Hecate has larger solar farms in the works in Texas, New Mexico and California among others.

Poole reiterated that he $400 million Pulaski County project is well within the company’s ability to complete.

The company already has 20 or so landowners interested in leasing property for the approximately 2,700-acre Pulaski County project, though Poole has stated only roughly 1,900 acres would be used since some of the land being leased is not conducive to housing solar panels.

Those who lease land are paid by the acre, but Poole declined to specify a specific number, citing privacy issues.

The land proposed for the project is currently zoned for agricultural use only, but the company has filed for a permit, allowing the company to lease the properties for 35 years, which is the expected life of the project, according to Hecate’s application to the county.

Those who’ve spoken out against the project on social media say the project will be an eyesore for adjacent properties, and that it will damage the agricultural business in the county.

However, the majority of the county’s land remains zoned for agricultural purposes, according to County Administrator Jonathan Sweet. The county has 103,726 acres, or 52.9%, of its land zoned for agriculture, according to Sweet. Additionally, agriculture is also an allowable use in conservation zone districts, which makes up approximately 59,000 acres, or another 30% of the county’s land.

Opponents of the project have also pointed to what they perceive as a conflict of interest from Board of Supervisors Chair Joe Guthrie, who is looking to lease approximately half of his family’s 460 acres near the airport to Hecate. Guthrie said he and the county have been transparent about the situation.

Guthrie declined to speak about the about the project in greater detail — including whether he would vote to approve the permit at the supervisor’s Jan. 25 meeting — stating everything he had to say about it was submitted in his public declaration.

Sweet said the Hecate and the county have been in talks about the project since 2018 regarding the feasibility of the project. Poole said his company’s interest in Pulaski was largely to do with the county’s abundance of land.

Besides the additional tax revenue the county will receive from the project — currently projected at approximately $15 million over the next 35 years — Sweet hopes the county’s commitment to renewable energy will yield other positive outcomes for the locality.

“I would also hope it would better help us market our community to businesses and industries that value renewable energy, he wrote in an email. “Furthermore, I would hope this will help preserve ownership of family farmland and provide needed income streams to those private land owners who will be leasing their lands for the project.”

Continuing, he said: “There is a growing demand for renewable energy from major corporations. There is also a growing market for differentiated communities where counties are aggressively competing against each other to secure the next economic development project. Having these types of assets in our community helps us financially to grow and position or county to compete and also provides us with a marketable image which may increase site location decisions.”

For more information about the project, visit www.pulaskicounty.org/planning-zoning.html.

The Pulaski County Planning Commission recommended the board of supervisors approve the special-use permit a Chicago-based renewable energy company needs to move forward with one of the state's biggest solar farm projects.

Another solar farm on the horizon for Pulaski County

A Chicago-based company is aiming to build a 2,700-acre solar farm on various pieces of property throughout Pulaski County

The Pulaski County Board of Supervisors approved a plan for a 2,700-acre solar farm on a patchwork of private properties, many of them family farms. Chicago-based Hecate Energy will lease the land on a per-acre basis for up to 35 years and could generate enough electricity to power 57,000 homes.

Sheep graze behind the Carilion New River Valley Medical Center—in between the hospital’s solar panels. A national company is proposing similar solar infrastructure — but on a much larger scale in Pulaski County — not too far from the medical center.

Carilion New River Valley Medical Center installed a solar panel array on seven acres of its campus outside of Radford. The panels are similar to what would be built by Hecate as part of a much larger project proposed in Pulaski County.

A map of the proposed Pulaski County solar project.