A rendering shows what Virginia 419 might look like at the intersection of Carriage Lane. Plans for the surrounding Oak Grove area were recently published. 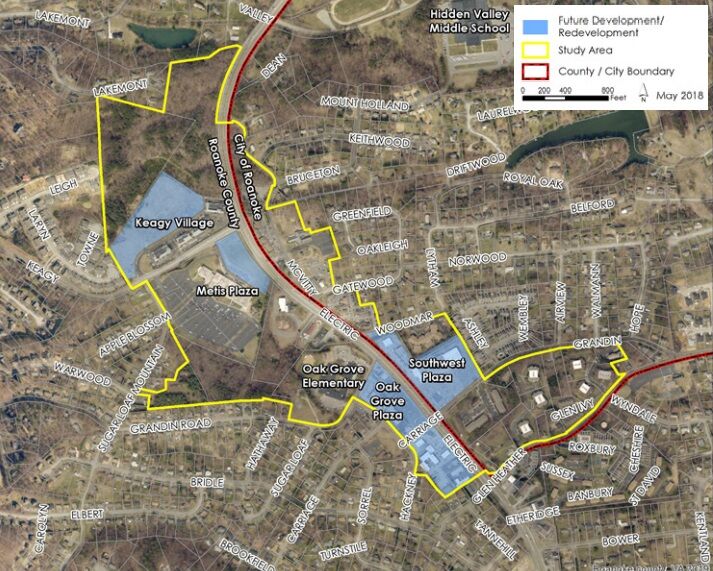 An aerial map shows the extent of the Oak Grove Center Plan, highlighting areas with potential for further development. The study covered 173 acres of commercial corridor along Virginia 419, marked on this map as Electric Road.

A rendering shows what Virginia 419 might look like at the intersection of Keagy Road. Plans for the surrounding Oak Grove area were recently published.

Planners from Roanoke and Roanoke County partnered in 2018 to study 173 acres along a shared commercial corridor where city and county borders meet at Virginia 419, or Electric Road, in the Oak Grove neighborhood, said Roanoke County Planning Director Philip Thompson.

“The study area is fairly small, and it’s mainly confined to the commercial area of Oak Grove,” Thompson said. “We work well with the city. This is kind of our first joint planning effort together.”

Findings from the Oak Grove area study, including input from more than 1,300 members of the public, were compiled since 2018 into 185 pages and published on Roanoke County’s website last week as the draft Oak Grove Center Plan, pending a vote of approval by elected officials.

“It’s our intent to look at our commercial corridors and see if there are places where we can get increased density — building up instead of out,” Thompson said. “We identified about a dozen places around the county to do this type of study, and this is the third one we’ve done.”

Like other areas Roanoke County studies as part of its reimagine planning, transportation was a primary focus of the Oak Grove Center Plan.

Construction of safe crosswalks will be a priority for future road improvements in the Oak Grove area, especially along the bustling Virginia 419 corridor, said Roanoke Senior City Planner Wayne Leftwich.

“That’s one of the things we heard loud and clear,” Leftwich said. “We need to find a way to make better connections from one side to the other.”

Electric Road’s four lane highway carried 22,000 vehicles through the Oak Grove area on an average day in 2019, the plan said.

“You do have people now crossing that highway without safe facilities,” Thompson said. “There are folks on motorized wheelchairs crossing that.”

More than 75% of citizen participants cited cut-through traffic on Oak Grove neighborhood streets as an issue, the plan said. Half of respondents had concerns about speeding on Virginia 419.

“Connections and transportation issues were a big part of it, 419 has a lot of traffic,” Leftwich said. “A lot of traffic does drive through the roads off that corridor too.”

Crosswalks are proposed at a handful of intersections, as well as sidewalks to connect neighborhoods to Oak Grove shopping centers: Southwest Plaza, Oak Grove Plaza, Metis Plaza and Keagy Village.

“We got a lot of feedback from citizens about wanting to be able to walk to some of the commercial places,” Thompson said. “Extending pedestrian facilities into the neighborhoods was raised as a big deal.”

Sidewalk and other street projects on Virginia 419 will proceed through the Virginia Department of Transportation. It will take years to complete the expensive intersection improvements identified for Oak Grove, but the Roanoke governments will apply for grants from regional and state funds to complete the projects over time.

Private development happens at its own pace, but planners penned the Oak Grove study with hopes of encouraging investors to hurry up and develop.

“As some of these shopping centers such as Southwest Plaza grow or change, then we’ll be looking at this plan to sort of direct them to the way the neighborhood wants to grow,” Leftwich said. “But something may not happen for a while.”

The plan unites future county and city efforts to attract investors whose investments will fit the wants of the Oak Park community, from requests for more multifamily housing, to desires for more places to shop and eat.

“We’re really providing a future developer, or even someone just rehabbing one of these buildings, an opportunity to know what the neighborhood wants to see,” Leftwich said. “We hope that helps drive future investments.”

The plan provides demographics of the 12,462 residents living within a 1.5-mile radius of the study area, helping qualify Oak Grove as a tempting location for investors.

“What these plans tend to do, it does generate interest in the area you’re trying to work on,” Thompson said. “You get a lot of interest.”

A new veterinary hospital opened last week in Keagy Village, where there is also enough available acreage to build a brand new grocery store. Nearby that shopping center, Starbucks is opening a new coffee shop at a former BB&T bank building.

Behind Oak Grove Elementary, 6 acres of county-owned land adjacent to Oak Grove Park present an opportunity to expand and improve the existing playground, tennis court, restrooms and picnic shelter, listed in the plan as a top priority.

The Oak Grove Center Plan is pending a March vote for adoption by elected officials in both Roanoke city and county, after a final round of public hearings in February. If approved, the Oak Grove plan will be adopted into the governments’ comprehensive plans.

“What’s nice about this plan is it really does affect the city and the county,” Leftwich said. “No matter how the boundaries are drawn, it really affects the surrounding neighborhoods as well.”

Roanoke County wrapping up latest effort to expand broadband in rural areas, with more to come

Pulaski County's government year will begin with consideration of what would be the largest solar farm in Southwest Virginia - and one of the largest in the state.

April Staton, now vying for a second term as Salem sheriff, joined the city sheriff’s office in 2003 and worked through the ranks to chief deputy, until being elected sheriff in 2017.

“It really was kind of a great coincidence the building next door was available for sale,” said County Administrator Dan O’Donnell. “It’s been just a perfect solution I think, because we didn’t have enough space.”

A rendering shows what Virginia 419 might look like at the intersection of Carriage Lane. Plans for the surrounding Oak Grove area were recently published.

An aerial map shows the extent of the Oak Grove Center Plan, highlighting areas with potential for further development. The study covered 173 acres of commercial corridor along Virginia 419, marked on this map as Electric Road.

A rendering shows what Virginia 419 might look like at the intersection of Keagy Road. Plans for the surrounding Oak Grove area were recently published.