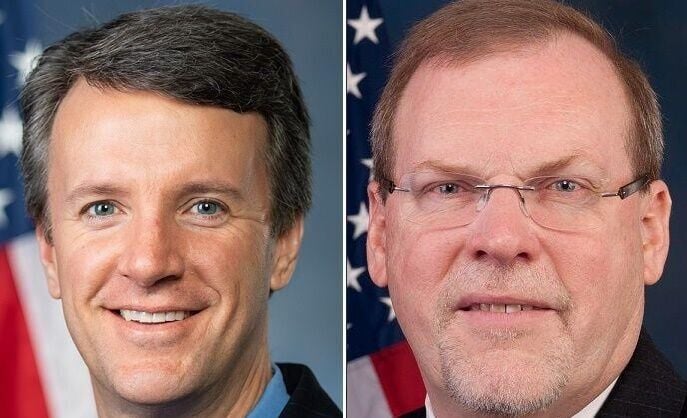 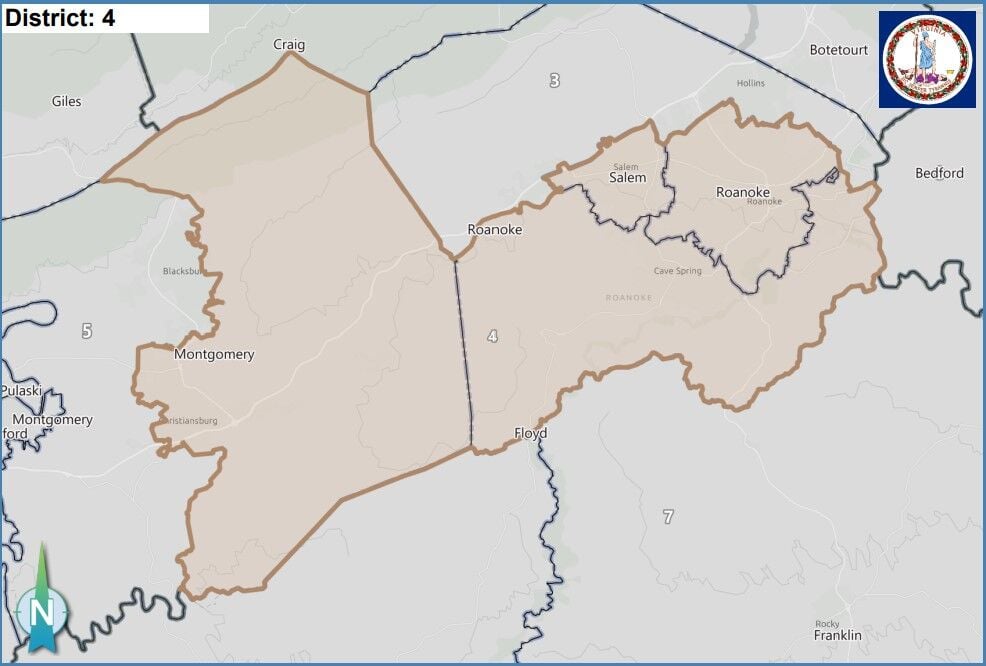 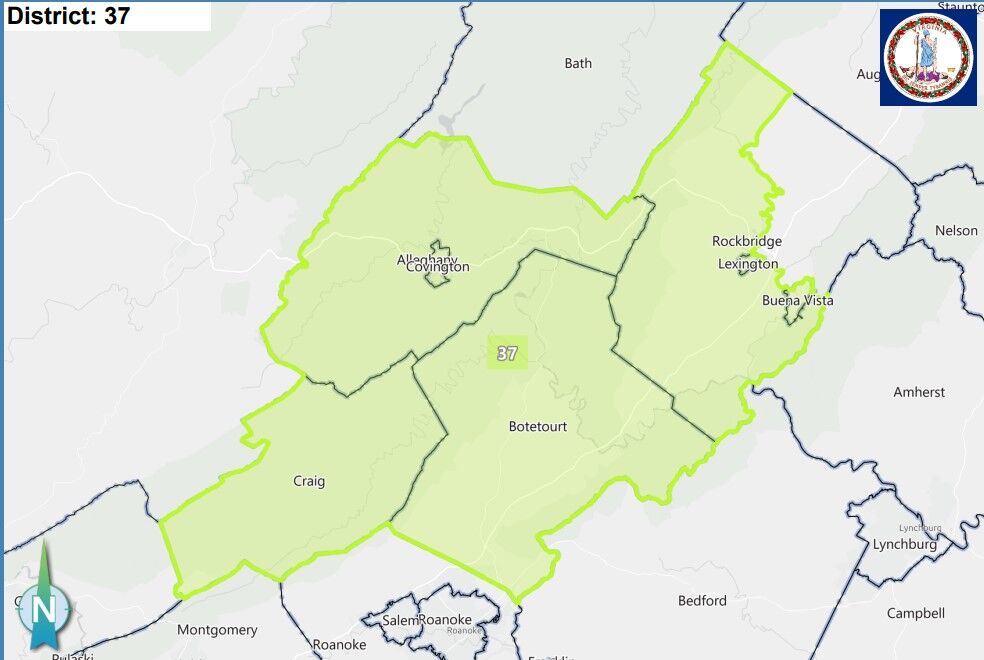 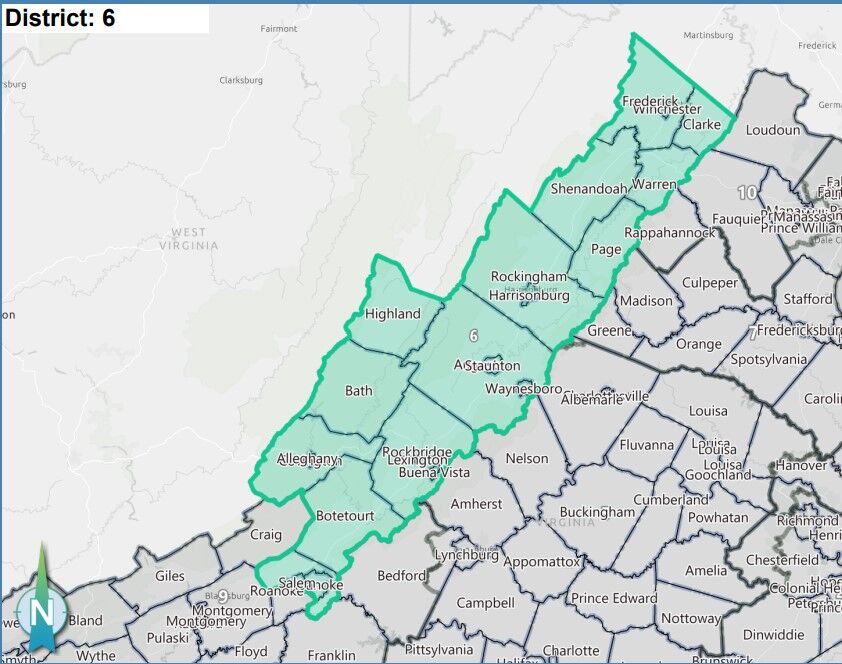 The newly configured 6th Congressional District eliminates a swing to Lynchburg to the east and extends the district further north into the Shenandoah Valley. 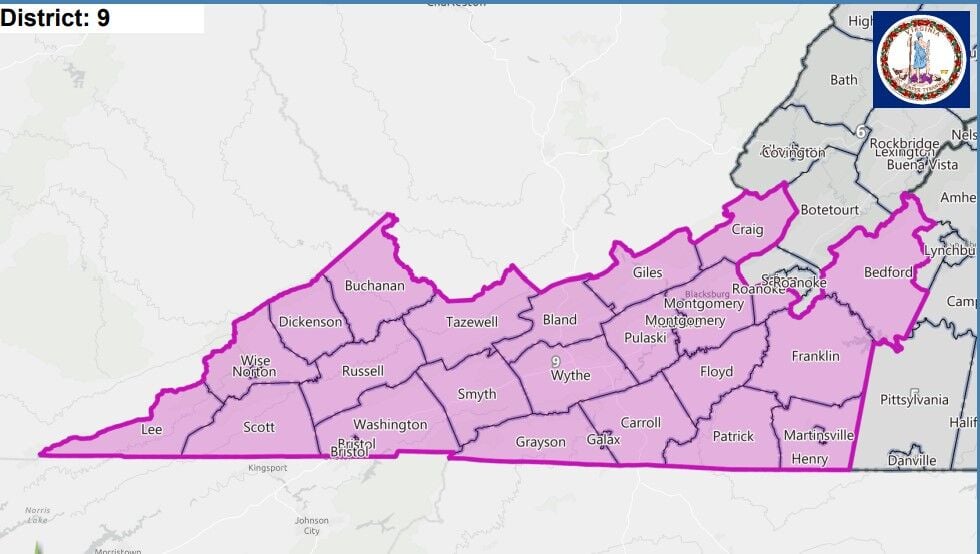 Revised voting maps in effect for the next 10 years combine some voters in the Roanoke and New River valleys into significantly different legislative districts that could shake up the political status quo.

In one example, both state Sens. John Edwards, D-Roanoke, and David Suetterlein, R-Roanoke County, live in the newly created 4th Senate District. In 2023, the year of the next primary and general elections for state Senate, the two men could face off for a single seat.

But the new maps also preserve in some cases the existing lines to a large degree. The House of Delegates district for Roanoke, represented by Democrat Sam Rasoul, appears minimally different in the new version.

At the congressional level, there were also few changes in the immediate region, and incumbent Reps. Ben Cline, R-Botetourt, and Morgan Griffith, R-Salem, promptly announced reelection plans in the 6th and 9th Congressional Districts, respectively.

The full Supreme Court of Virginia on Tuesday approved new voting districts for the state Senate, the House of Delegates and Virginia’s seats in the U.S. House of Representatives.

The court’s special masters, chosen from nominees submitted by Republicans and Democrats, drew the maps after a voter-backed state commission gridlocked over political differences and failed to deliver results by deadlines.

People from the Roanoke and New River valleys commented heavily during the once-a-decade redistricting exercise, according to the special master’s final report, which runs 63 pages. While not all input was not acted on, all of it was read, they said.

As was their charge, the special masters broke the state into voting districts of like voting-age population — 86,314 people for House of Delegates districts, 215,785 people for Senate districts, and 784,672 people for congressional districts.

They said they also reduced the number of municipalities previously split into separate districts, created compact and contiguous districts that respected communities of interest, met their obligation to give racial and language minorities “an equal opportunity to participate in the political process” and drew maps without regard to partisanship.

Additionally, except for a few cases, they willfully ignored where incumbent lawmakers lived. The rules did not require that they consider who was in office, to which party the person belonged or whether incumbents would be hurt or helped by the new lines.

In another example of pairing, both current House of Delegates members Chris Head, R-Botetourt, and Terry Austin, R-Botetourt, live in the newly created 37th District.

“Any redistricting map featuring this degree of geographic consolidation will almost certainly pair incumbents together; if those incumbents live in a narrowly defined geographic area the chances of being paired together are increased,” the special masters’ wrote. “In this respect, we consider the treatment of incumbents to be an example of the redistricting process working as intended.”

The new maps also clean up some bizarre shapes that appeared the result of past gerrymandering. A new 37th District includes four contiguous counties — Alleghany, Botetourt, Craig and Rockbridge — and the towns within them and cities adjacent.

Gone are two jetty-like protrusions in Austin’s old district that reached east from Botetourt nearly to Forest and to Smith Mountain Lake.

The redrawing of the Virginia Senate voting districts in the Roanoke and New River valleys was especially “vexing,” the special masters commented, “since we received so many contradictory claims regarding what areas should be included in which districts and where exactly the COIs [communities of interest] lay.”

The report continued: “Had we started in this area we might have drawn different districts, but we ultimately decided we could not enact major changes here. The Roanoke suburb of Vinton was placed with Roanoke to accommodate a request that appeared to be sensible given transportation lines and population patterns. We also kept Glenvar whole.”

The special masters took heat for a draft proposal — since approved — that divided Roanoke County between the 6th and 9th Congressional Districts.

“Some commenters expressed dismay that Roanoke County was not kept intact,” they wrote. “Doing so would require drawing Cave Spring’s substantial population into the 6th, which in turn would require significant alterations elsewhere. We did learn, however, that if Craig County were placed into the 9th — increasing the number of Virginia’s Appalachian counties placed into the 9th — that we could add a few additional precincts in Roanoke County to the 6th. We have done so.”

During a phone call Wednesday, Griffith said certain Virginia district lines, such as the 1st and 9th U.S. House, still maintain some odd configurations, suggesting that district boundaries were not always drawn exclusively for political reasons.

“Look at Bedford, the 9th District now goes all the way to the Amherst County line. It’s a little goofy,” Griffith said. “I think they could have done better on that … Sometimes you just have to draw strange lines to make the numbers fit.”

In an emailed news release, Cline said he would be a committed and consistent conservative voice for the people and the state, no matter the district lines drawn for Virginia’s 6th District. The new 6th District boundary expands northward to include the entire Shenandoah Valley.

“I look forward to the opportunity of introducing myself to the new voters added to VA-6 including the Counties of Frederick, Clarke, and Alleghany, and the Cities of Winchester, Covington, and Salem,” Cline said in the statement. “However, I am disappointed I will no longer have the privilege of representing so many friends and neighbors in Amherst and Bedford Counties and the City of Lynchburg.”

Earlier announced as a candidate for the 6th District is Democrat Jennifer Lewis, who filed this summer for a second attempt to win the post. In an emailed statement, the Waynesboro resident said she was eager to speak with new 6th District constituents and hear about their needs.

“While the newly drawn district brings many new constituents, we are sad to lose Lynchburg and surrounding areas,” Lewis said in the statement. “We appreciate and value the relationships we have built in those areas in previous years and look forward to building new ones in the future.”

The electoral repercussions of redistricting in the Virginia General Assembly will not be felt until the 2023 election, but the now court-approved election districts will be in place for the next decade.

The newly configured 6th Congressional District eliminates a swing to Lynchburg to the east and extends the district further north into the Shenandoah Valley.