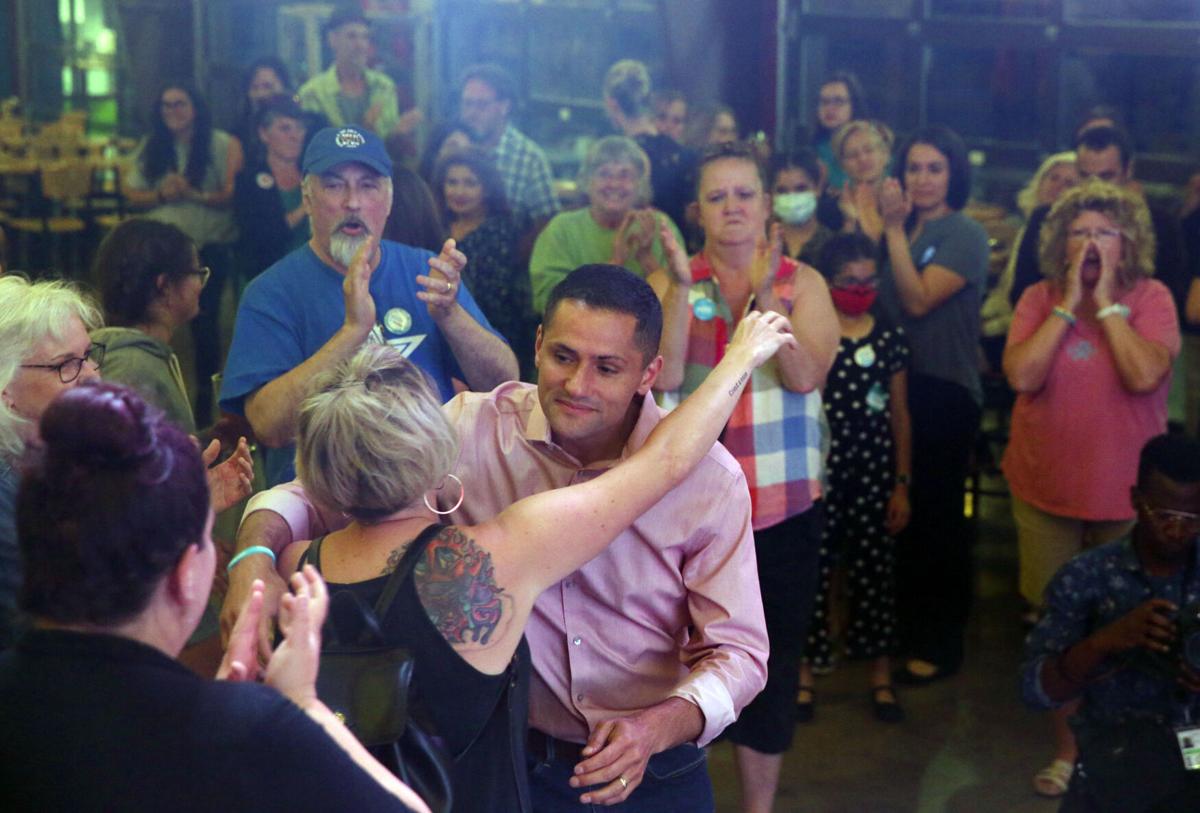 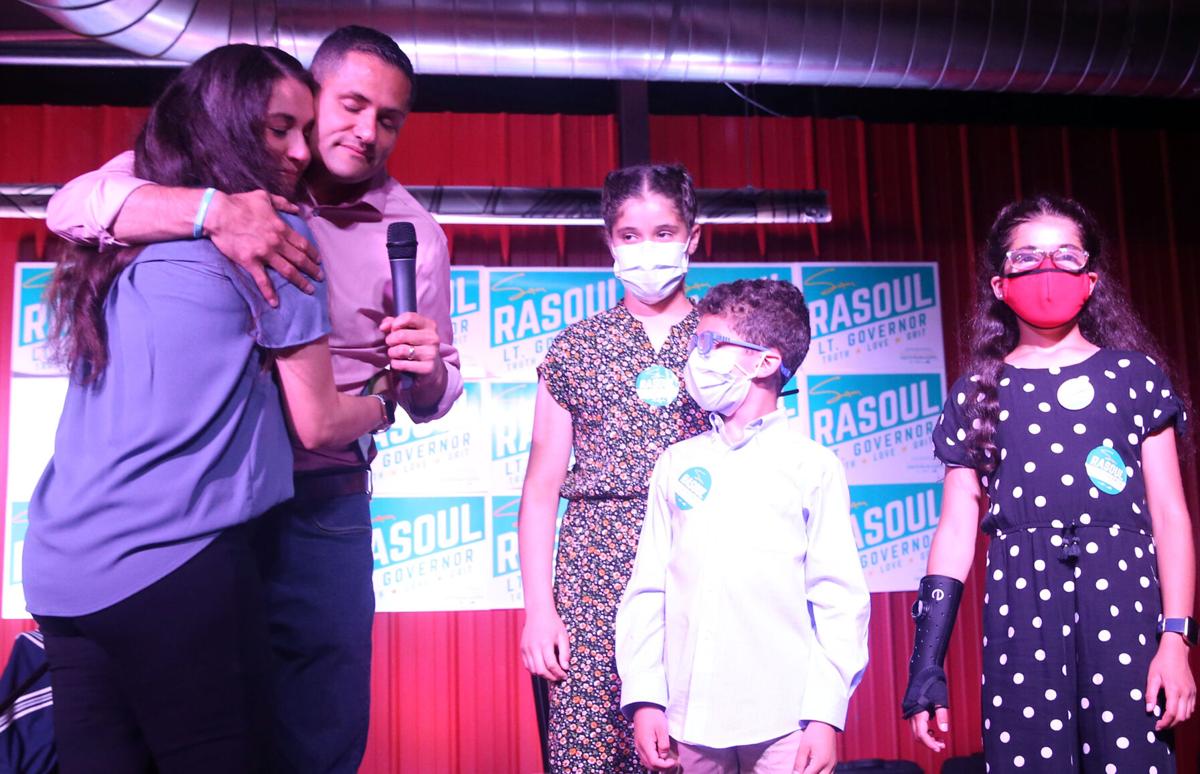 Del. Sam Rasoul D-Roanoke, embraces his wife, Layaly Rasoul, during a election night watch party on Tuesday at Twisted Track Brewpub in Roanoke. Their children stand by, from left, Jennah, Issa and Amirah. 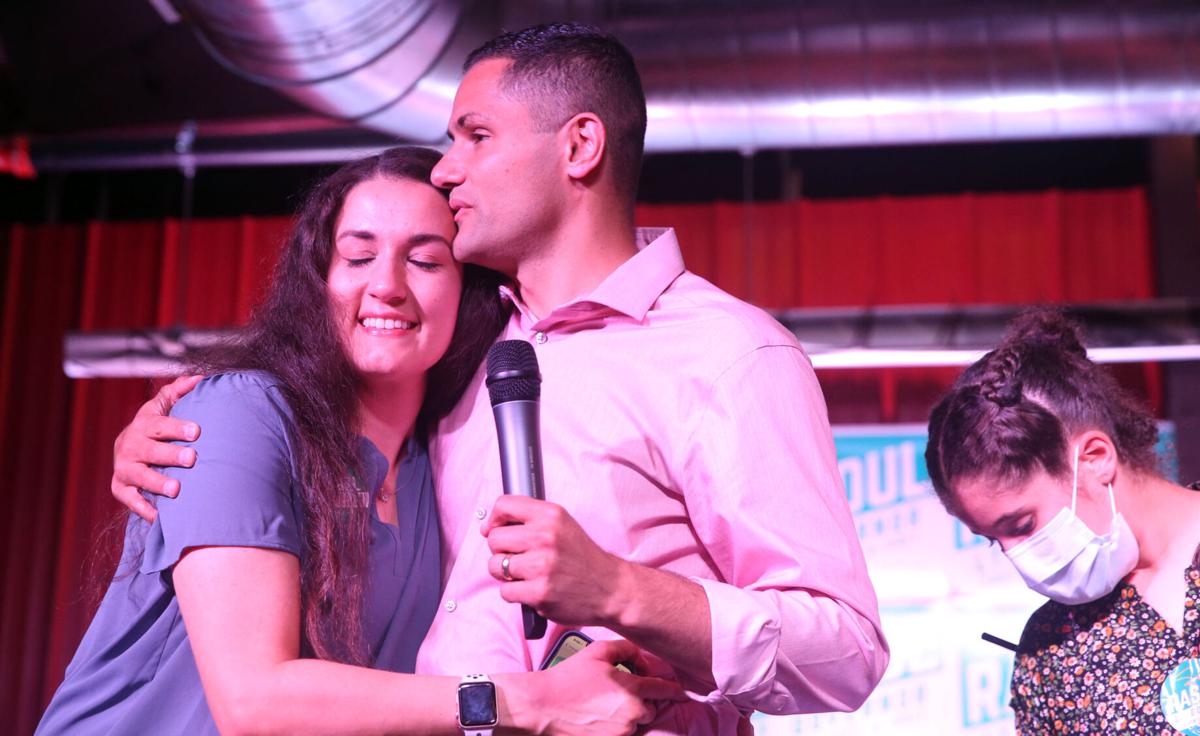 Sam Rasoul on primary election night told staffers and supporters gathered in Roanoke that he would continue fighting to punch holes in darkness, even though his campaign fell short of winning the Democrat nomination for lieutenant governor.

“Sam Rasoul is not going away,” he said to a crowd of about 40 people. “As tough as politics can be, as cynical as we can be sometimes, we know that what we need to be able to do is to be punching those holes in darkness.”

The idea to punch holes in darkness came from a keynote speech at an interfaith prayer breakfast held annually in Richmond before General Assembly sessions, Rasoul said. It is one memory he shared from his time in politics.

“We've got to be able to hold on to these stories, as we are healing as a nation in some ways, as we are trying to push forward a bold, progressive agenda,” Rasoul said. “We wanted to visit every city and county in Virginia to say ‘all of you count. We all matter.’"

Rasoul said he saw faces in the crowd trying to claim their stake and have a seat at the table in politics.

“I can't wait to see what the next four years brings for all of us,” Rasoul said. “Count me in as a partner … as we elevate all.”

Rasoul applauded what he said was the most diverse field to ever run for lieutenant governor, and thanked the crowd assembled at Twisted Track Brewpub in Roanoke.

“While we've fallen a little bit short today, I have been there before,” Rasoul said. “Each time has been a lesson, and it's been a moment of growth for me personally. I want to thank you all.”

Photos: From primary election day and night in the Roanoke and New River valleys

The incumbent had earlier lost a chance at the Democratic party nomination.

The $25 million project could be paid for without a tax increase, according to a report.

Wren Williams' margins in Patrick and Henry counties were too much for incumbent Charles Poindexter to overcome in his home base of Franklin County.

BEDFORD — More than a handful of Bedford County residents spoke out against the Virginia Department of Transportation's plans to remove a crossover at Camp Jaycee Road on U.S. 460 as part of an estimated $3.7 million project to improve safety in that area.

He will face Republican Marie March in in the general election.

There are no other announced candidates for the general election in November.

The most recent clashes add another chapter to what has been a rocky past year for Christiansburg Town Council, with Councilwoman Johana Hicks often at the center of the rifts.

Del. Sam Rasoul D-Roanoke, embraces his wife, Layaly Rasoul, during a election night watch party on Tuesday at Twisted Track Brewpub in Roanoke. Their children stand by, from left, Jennah, Issa and Amirah.