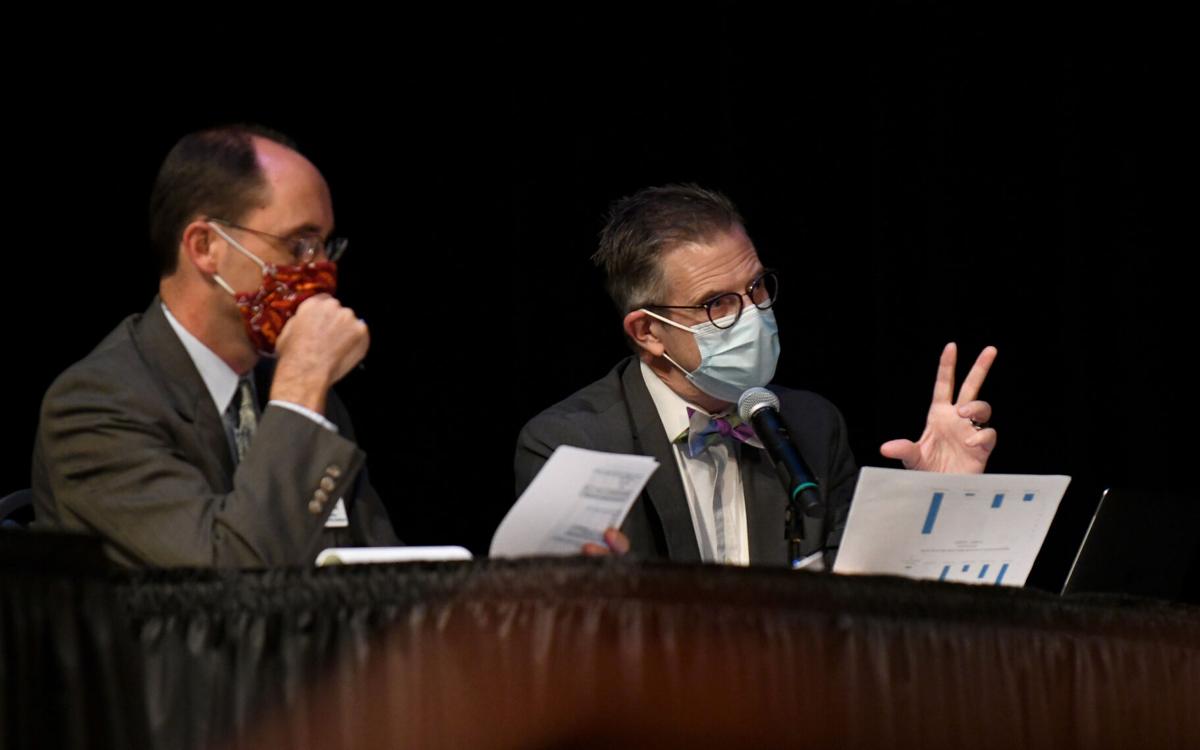 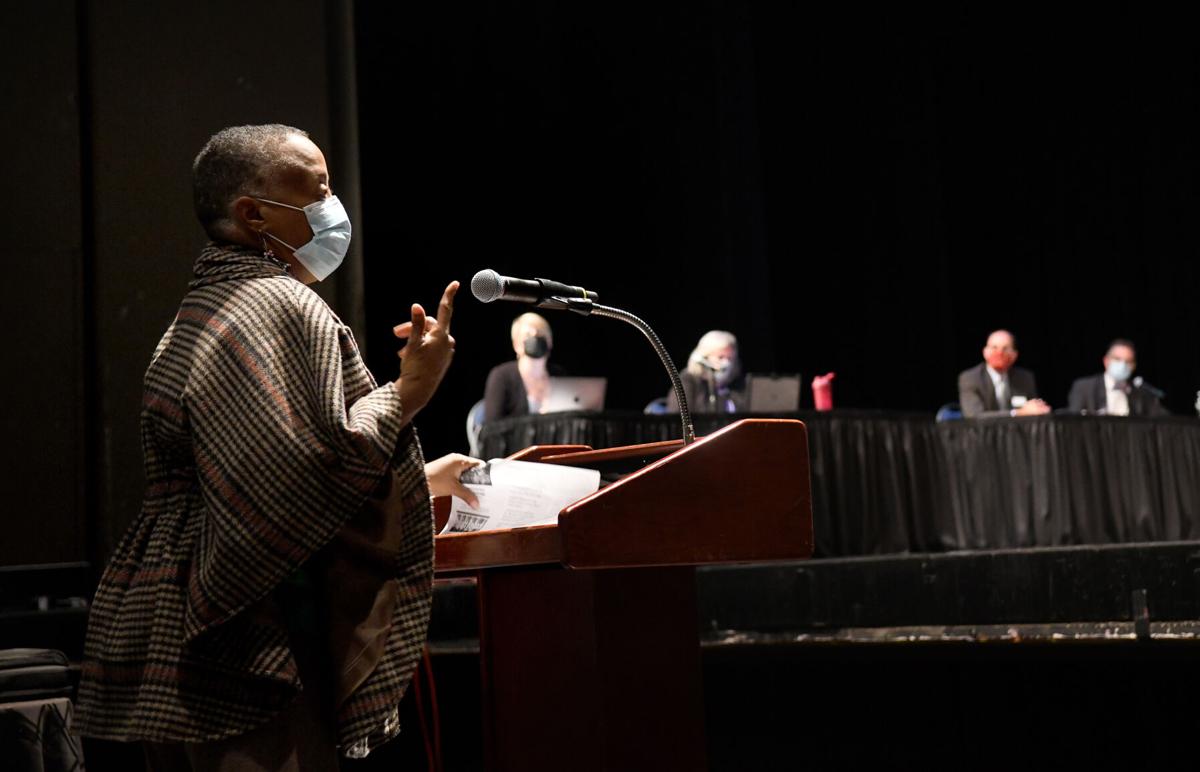 Regina Goforth, director of Project Payback, speaks during the community forum portion of the Gun Violence Prevention Commission meeting at the Berglund Center in Roanoke Tuesday. 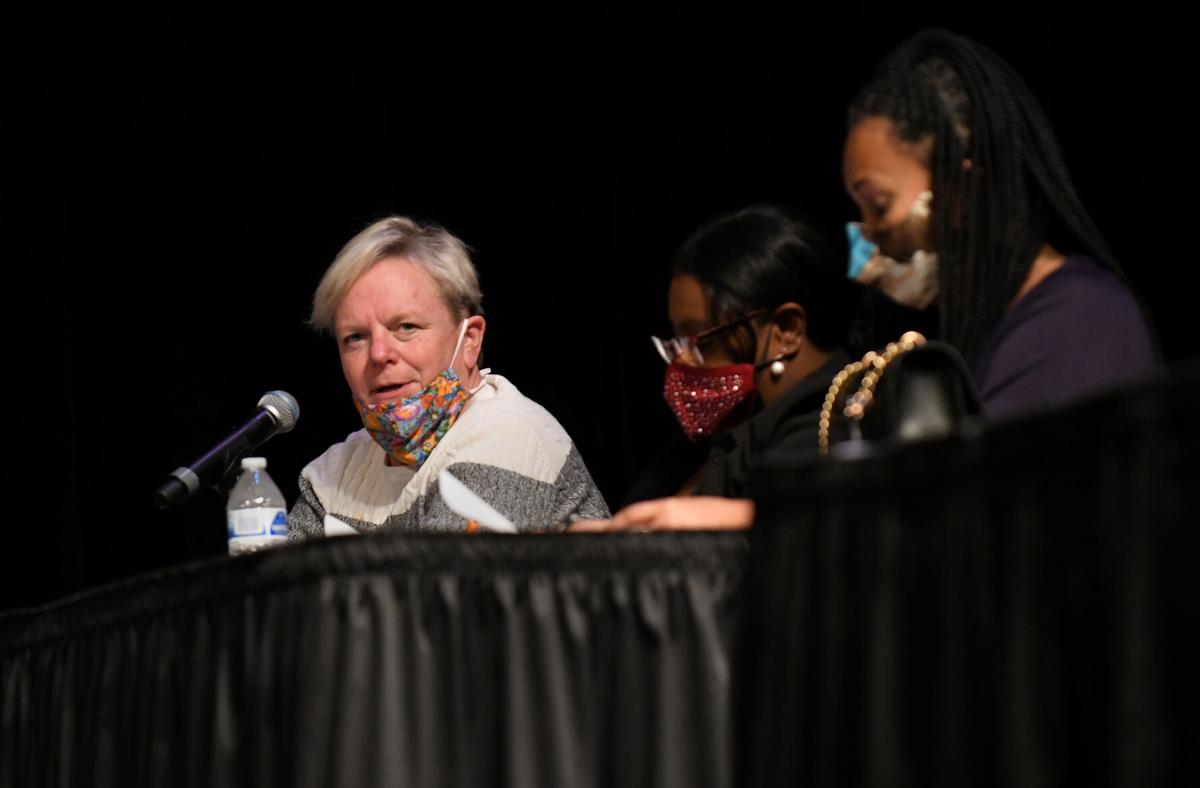 Rabbi Kathy Cohen, left, during the meeting of the Roanoke Gun Violence Prevention Commission at the Berglund Center on Tuesday. 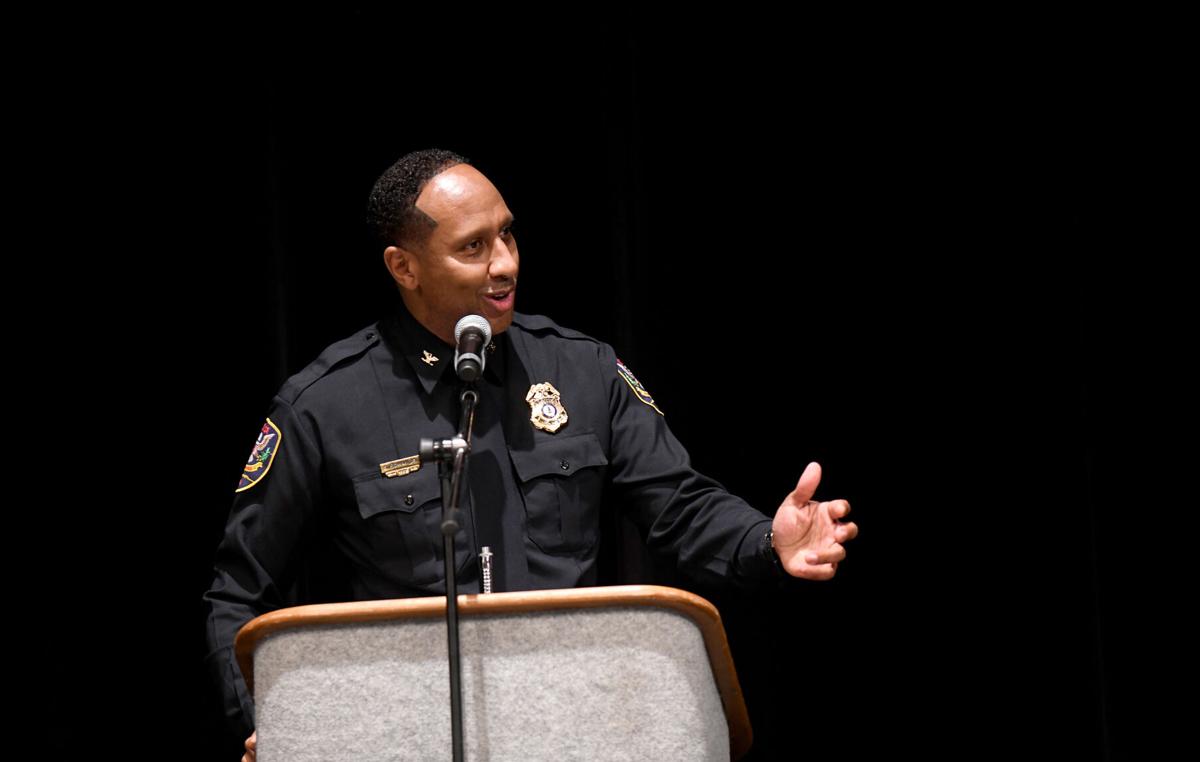 Roanoke Chief of Police Sam Roman takes the podium during the Roanoke Gun Violence Prevention Commission meeting at the Berglund Center in Roanoke on Tuesday. 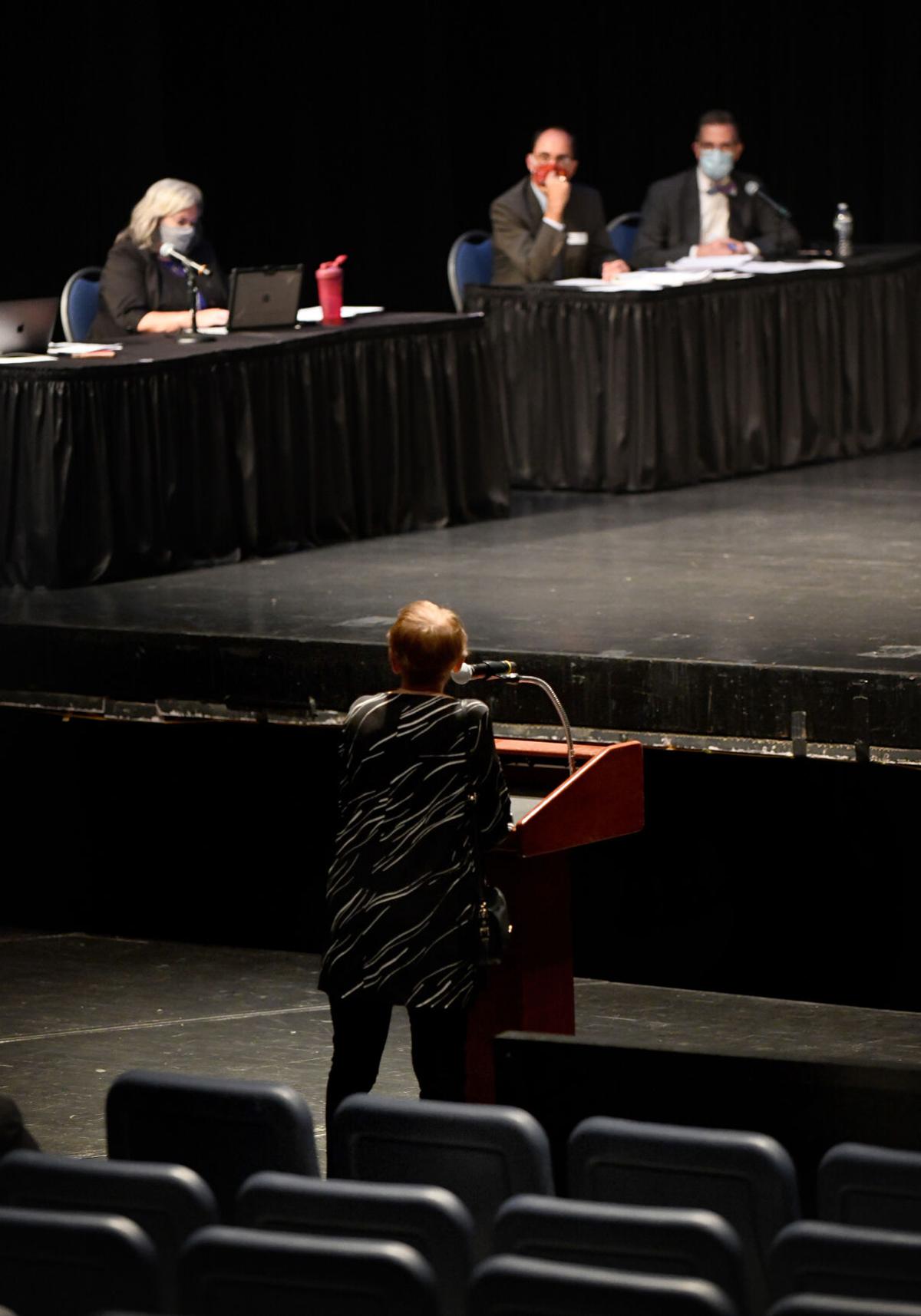 Community Members were each given five minutes to speak during the public hearing portion of the Gun Violence Prevention Commission meeting at the Berglund Center Tuesday. 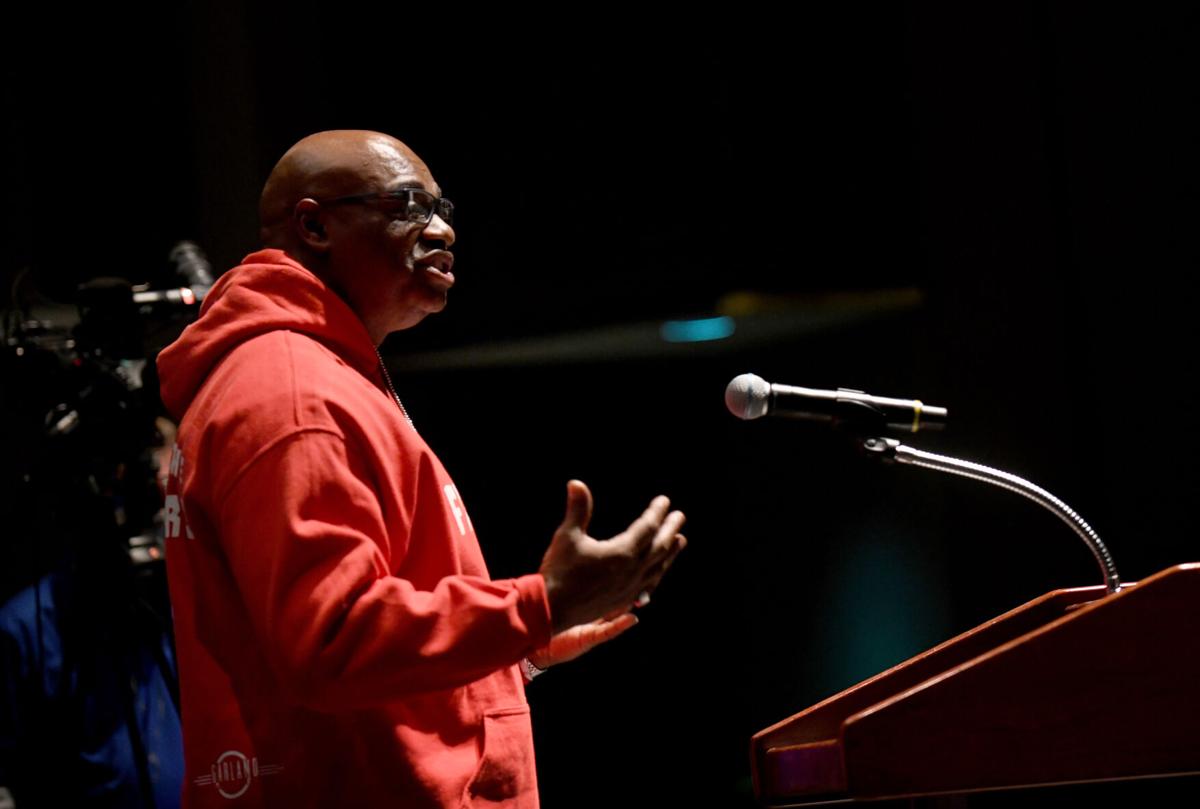 Shawn Hunter, with Peacemakers, speaks during the public hearing portion of the Gun Violence Prevention Commission meeting at the Berglund Center Tuesday.

Roanoke is crafting a plan to invest over $2 million of federal aid in anti-violence work over the next two years.

The details of what that will look like are still taking shape but city leaders convened a forum Tuesday night to begin gathering community ideas.

This is the single biggest injection of financial support that Roanoke, which is seeing a surge in shootings, has had at its disposal to combat gun violence. The money was carved out of the city’s share of American Rescue Plan Act assistance.

The funding comes at a time when multiple agencies and a gun violence prevention commission are working to confront the root causes of a shooting epidemic that has led to more than 60 woundings and fatalities in Roanoke just this year.

That is a 22% rise over last year, which at the time was already showing a worrisome rise in incidents, according to police data.

That same trend is playing out nationwide, officials noted, where gun violence is up in communities ranging from Washington, D.C., to Des Moines.

Tuesday night’s public comment, held at the Berglund Center, ran the gamut from practical proposals — such as beefing up recruitment of school bus drivers where a high vacancy rate has hobbled the ability to get kids to much-needed after-school programs — to pleas for support of programs that connect people with the arts and nature as a conduit to healing and emotional wellness.

Time and again, speakers, 10 in all, also spoke of the importance of youth outreach. That has become a major focus of the work of the city’s gun violence prevention commission as well.

Young people in their 20s and teens account for about two-thirds of the suspects identified so far in this year’s local shootings. One of the youngest people arrested, charged in an April homicide, was just 15.

The question of how to reach that demographic and to change the systems that leave them feeling hopeless and lost has become one of the dominant questions of the city’s anti-violence strategy.

The need for more attention, more healthy programs and more opportunities for the city’s youth were echoed by multiple community advocates during Tuesday’s hearing.

“That availability means more than anything,” he said. “When somebody is getting ready to pick up a gun, who can they call, who can they talk to, where can they go for someone to change their mind and say there’s another way?”

Lenore Castillo, of Youth Enrichment Services, said the children she sees have immeasurable potential but need support networks in place backing them up and believing in them.

“As we all know, it takes a village to raise a child,” said Castillo, whose organization is sponsoring a stop the violence event this weekend. “In Roanoke, it’s going to take all of Roanoke to raise these children, to give them the opportunity to create and to succeed, and to have something in their life to look forward to.”

“We know they have the intelligence, they have the vim and vigor and vitality to want to do something for themselves,” she said. “We’re just asking for you to help us.”

Tuesday’s feedback, paired with input from the gun violence commission and other community outlets, will be weighed by city officials as they begin refining the plan for the anti-violence funding. City Manager Bob Cowell said he hopes to be able to announce more details in the coming weeks.

The American Rescue Plan Act money must be spent by the end of 2024.

City Councilman Joe Cobb, chair of the gun violence prevention commission, said he appreciated those who spoke at the forum, including advocates who urged officials to think creatively and to get input directly from the city’s youth.

“We need to be intentional about connecting the work we’re doing with our youth, and hearing directly from them about what they need and what they’re hoping for,” he agreed, adding some of those efforts are underway already and will be expanded upon.

Other priorities previously identified by the gun violence commission included neighborhood building and anti-recidivism initiatives. Officials will be moving forward thoughtfully and reflectively as they continue to consider the best use of the federal aid available, Cobb said.

Regina Goforth, director of Project Payback, speaks during the community forum portion of the Gun Violence Prevention Commission meeting at the Berglund Center in Roanoke Tuesday.

Rabbi Kathy Cohen, left, during the meeting of the Roanoke Gun Violence Prevention Commission at the Berglund Center on Tuesday.

Roanoke Chief of Police Sam Roman takes the podium during the Roanoke Gun Violence Prevention Commission meeting at the Berglund Center in Roanoke on Tuesday.

Community Members were each given five minutes to speak during the public hearing portion of the Gun Violence Prevention Commission meeting at the Berglund Center Tuesday.

Shawn Hunter, with Peacemakers, speaks during the public hearing portion of the Gun Violence Prevention Commission meeting at the Berglund Center Tuesday.