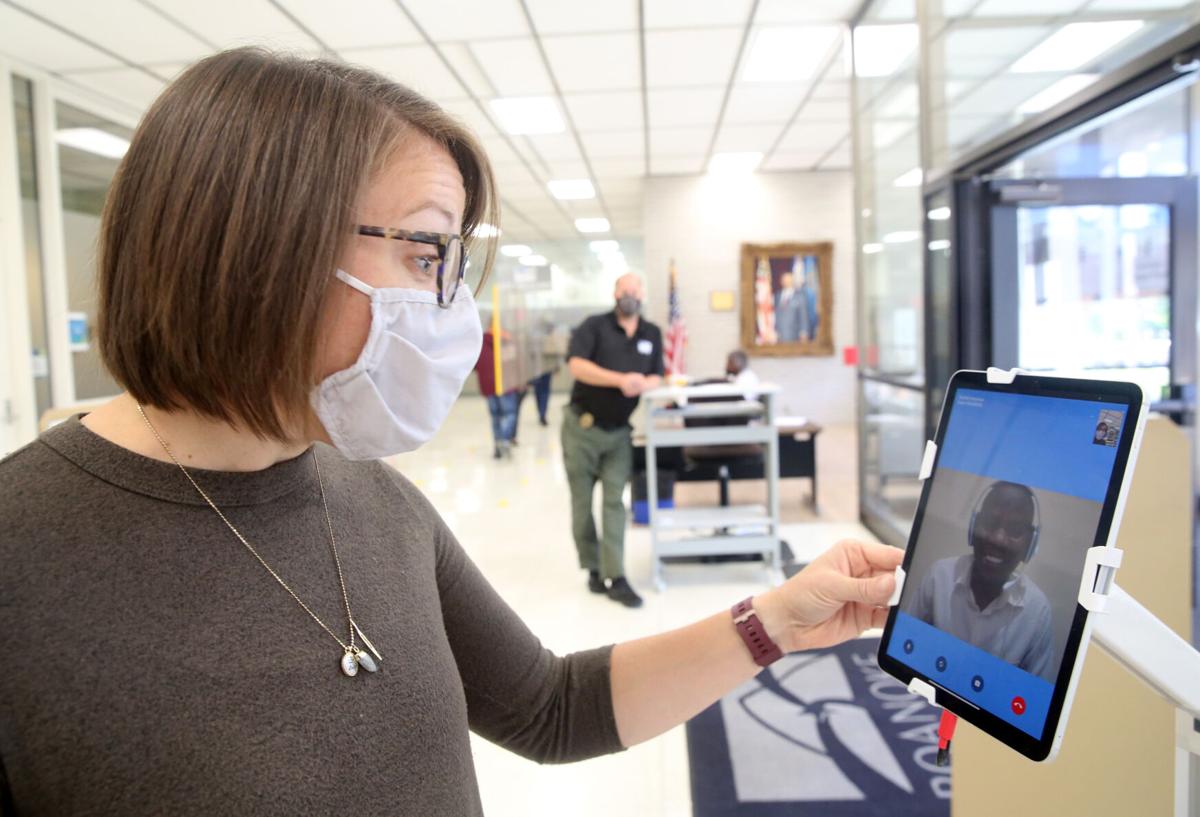 Bilingual program support specialist with the city of Roanoke, Katie Hedrick, demonstrates a video portion of the city’s new language access program from a kiosk at the city municipal building. Hedrick speaks with Swahili interpreter Evans Otieno, based in Kenya. 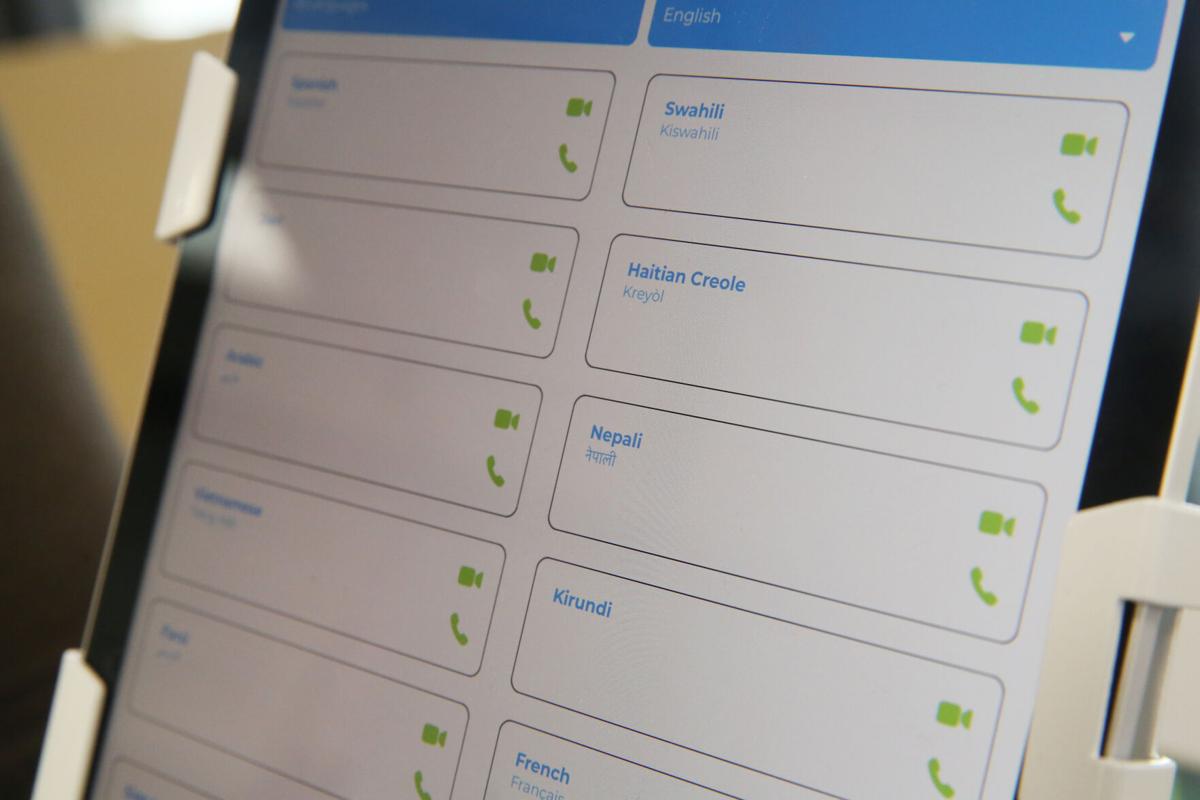 A list of some of the top spoken languages in Roanoke is what a user first sees when using the city of Roanoke’s new language access program. The program can be used from any device and with phone or video to speak with an interpreter in any of 286 languages. The new program offers help to people navigating city services in their native language.

About 95,000 of the 100,000 people who live in the city of Roanoke speak English well enough to work, attend school, receive health care, interact with government, use the transportation system and access the other necessities of life.

A language barrier inhibits that engagement for the other 5,000.

The city of Roanoke next month intends to take that barrier down.

The city has contracted with a company that can bring interpreters of 286 languages to the phone within half a minute, officials said.

The program is up and running in the courts, jail, emergency services, police, Department of Social Services and other municipal offices. It is intended to facilitate conversation between city offices and employees and members of the public with limited English ability. It works from a phone, tablet, laptop or computer.

Principles of language equity say that essential information should be available to members of a community in the specific language each person is most comfortable using, said Katie Hedrick, the city’s bilingual COVID-19 support specialist, who is heading up the program.

It’s not good enough for an agency such as social services to tell clients to bring their own interpreter to their appointment, said Steve Martin, agency director. It’s not good enough or even practical for children to translate for parents at the doctor, the bank or in teacher conferences, the logic goes.

Nor is Google Translate sufficient because, according to reviews, it makes errors.

The gold standard is live, two-way interpretation through a trained translator.

The city purchased its language access system from Roanoke-based Volatia Language Network, a private company that says it has built a network of 18,000 interpreters who provide on-demand translation 24 hours a day, seven days a week. Installation at the city began in April and is expected to be completed next month.

Complete cost information was not available, but information from Hedrick indicates the system could cost a few tens of thousands of dollars this year. Volatia charges a per-minute fee while interpretation is underway, but no monthly rate.

Many governments, including Roanoke at one time, school systems and health care organizations offer one-directional language services – organizational personnel can invite an interpreter into the conversation for encounters with people who don’t readily speak English, Kasongo said.

Bidirectional language access connects the resident with an interpreter in their preferred language as they initiate contact. There’s no lag time waiting for the person who answered to identify the caller’s language and find and arrange for an interpreter to participate.

Roanoke’s system even has an edge even over those organizations that offer connection with an interpreter through a hotline or call center, Kasonga said. In Roanoke, persons can directly dial the office or person they seek – just like, Kasongo noted, people who readily speak English do.

Kasongo, 35, is a native of Rwanda who came to Roanoke years ago. His company, which is based on his own experience as a limited-English speaker, was founded in 2003.

To understand how the system works, it’s simplest to imagine a hypothetical caller contacting Roanoke by phone for a new trash can, library card, information about a neighborhood group or such.

Most municipal phone lines in Roanoke are answered by a recorded message that says, “For English press 1. For all other languages, press 2.”

Volatia software activates when the second option is selected. “We have an algorithm that’s listening to them talk,” Kasonga said.

As an added feature, the system accommodates videoconferencing. That means city employees, who have password access to the Volatia app, can elect a videoconference rather than an audio call if they choose. If a resident needing help happens to be physically present, video might be the way to go.

A faster protocol provides interpretation for the 911 system to avoid delaying the caller’s report.

Hedrick, the program lead, said it may take some time for city personnel and users of city services to get the hang of how the system works. A period of training has begun that will continue, she said, including the eventual publication of a video to explain the system to members of the community.

Hedrick demonstrated the system Friday using an iPad tablet that’s been stationed in the lobby of the Noel C. Taylor Municipal Building. From a language menu, she selected Swahili with a tap of her finger. Unseen to users, the software summoned a Swahili interpreter to the call.

In moments, Evans Otieno appeared by videoconference from Nairobi, Kenya. Upon learning his location, Hedrick mentioned that one of the Roanoke Valley’s sister cities is Kisumu, Kenya.

Roanoke’s being a longtime refugee resettlement area, scores of languages are spoken locally. In addition to Swahili, a language spoken in Africa, foreign tongues that are commonly spoken in Roanoke include Spanish, Dari, Haitian-Creole, Nepali and Arabic, Hedrick said. There are 7,000 languages in the world, of which Volatia says it is offering 286.

An estimated 5% of city residents speak English “less than well,” according to data from the Virginia Department of Health.

For them, not being conversant in the dominant language presents all kinds of obstacles to success.

“You are pretty much left out of those opportunities and resources that can help your life become better,” said Ahoo Salem, who directs Blue Ridge Literacy, a nonprofit that helps adults reach life goals through literacy skills.

The practical uses for the new system are numerous.

Recently, a man walked into a local library to attend a vaccination clinic, Hedrick said. He did not respond verbally at registration for the shot, at which point event staff determined he was deaf. A tablet computer was brought out with the language app running. Somebody tapped the key for sign language.

“I’d say within 15 seconds we had an interpreter on the iPad,” Hedrick said. The man was given the tablet and “he held it through his whole appointment,” Hedrick said.

He has cancer, but it is being treated and he does not believe it would impact his ability to be the city's prosecutor, he said.

The race will be one to watch on Nov. 2 as Republicans attempt to regain the seat Democrats have held since 2017.

Glenn Youngkin's gubernatorial campaign is seeking to hold a rally outside the Brambleton Center in Cave Spring on Wednesday. Early voting will be taking place inside the center that day.

Democrat Derek Kitts is facing Republican Marie March in the race for an open seat in a district that has long trended for Republicans.

Bilingual program support specialist with the city of Roanoke, Katie Hedrick, demonstrates a video portion of the city’s new language access program from a kiosk at the city municipal building. Hedrick speaks with Swahili interpreter Evans Otieno, based in Kenya.

A list of some of the top spoken languages in Roanoke is what a user first sees when using the city of Roanoke’s new language access program. The program can be used from any device and with phone or video to speak with an interpreter in any of 286 languages. The new program offers help to people navigating city services in their native language.