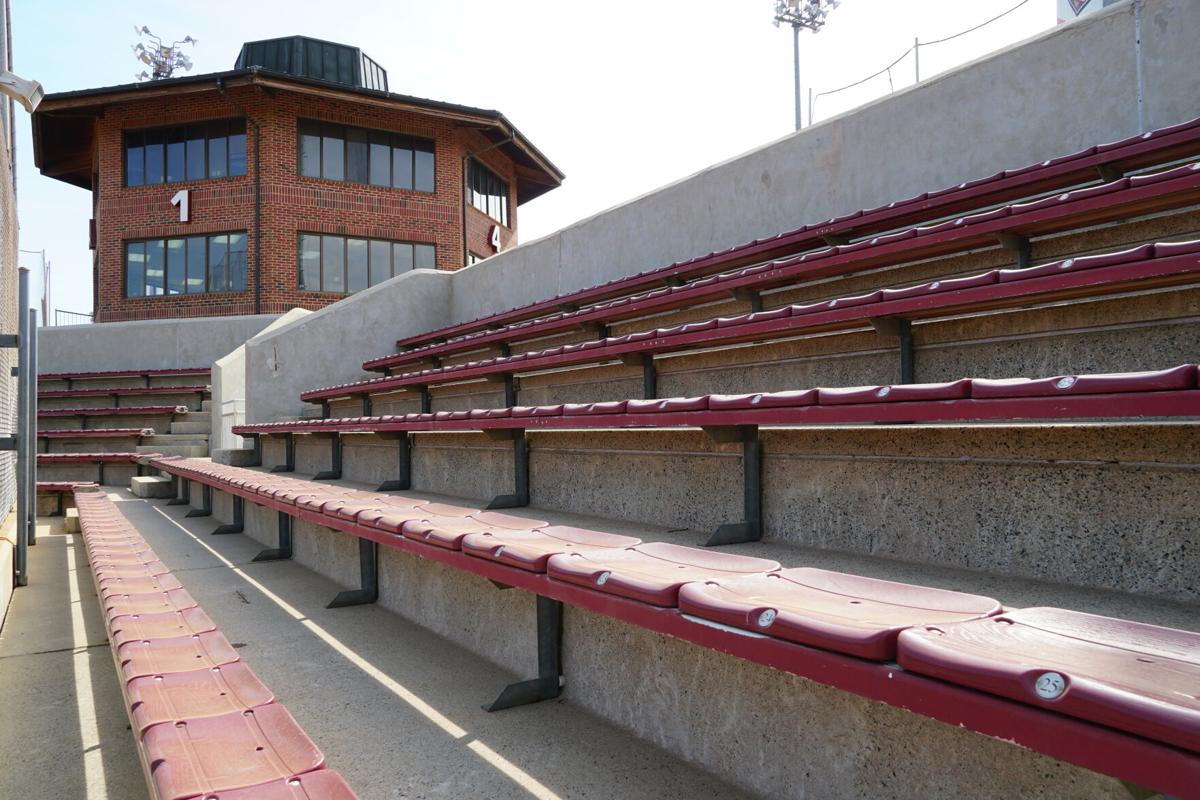 Salem’s Moyer Sports Complex has hosted softball and baseball tournaments for nearly 30 years and is in need of updates, city officials say. 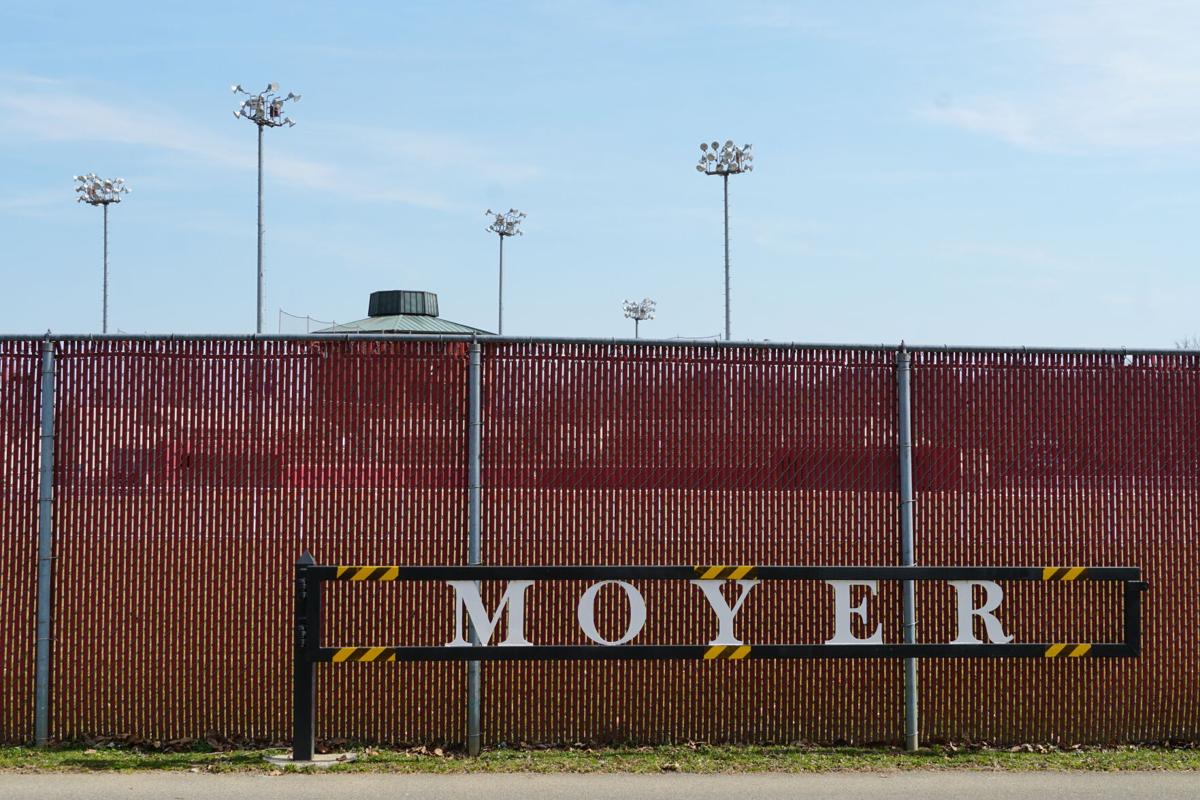 Scoreboards bought using money from sponsorships are the most recent upgrade to the Moyer Sports Complex in Salem, city officials said. The complex is overdue for improvements. 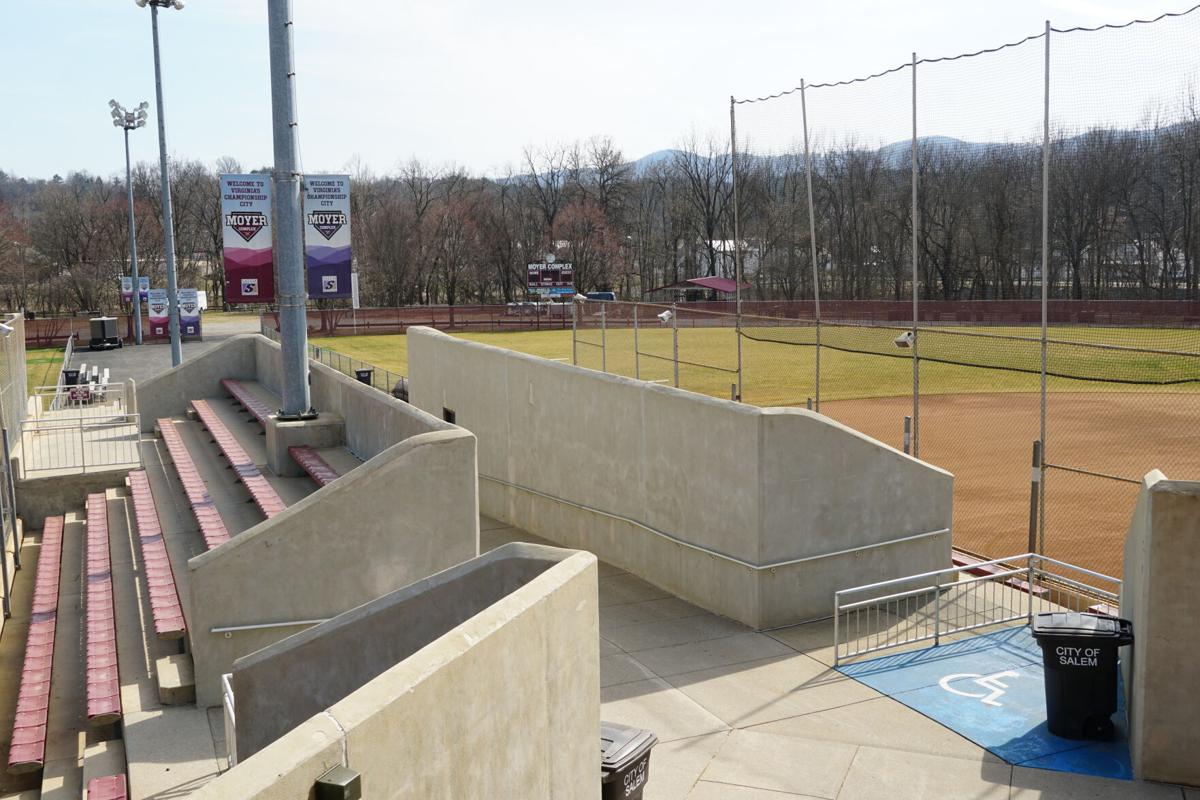 The Moyer Sports Complex has four ballfields arranged in a circle with a central press box and concrete grandstands for each field. 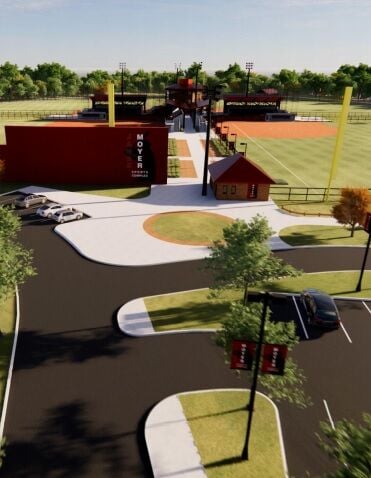 A rendering depicts what the front entry of the Moyer Sports Complex in Salem might look like, including a "Maroon Monster" in one of the outfields. Improvements to the nearing 30-year-old facility were recently proposed to city council.

While teams prepare to play ball at the James I. Moyer Sports Complex in Salem, this season may be the aged venue’s last before a pause in the action to receive $12.4 million in much needed updates.

In the tens of thousands of innings and rounding 30 years since Moyer’s four baseball diamonds were built in 1992, Salem has done little more than general maintenance on the fields and surrounding facility, said Parks and Recreation Director John Shaner.

“The Moyer Sports Complex is absolutely worn out,” Shaner said. “The world of sports marketing has gotten so competitive, and there are so many new complexes going up all across the country. We have got to stay competitive.”

The Moyer complex hosts events from youth baseball to USA Olympic softball teams, operating daily from March through November, Shaner said. It was recognized in 2011 as the Amateur Softball Association of America complex of the year, but the place is past its prime.

“We have hardly done anything to put back into this facility,” Shaner said.

Shaner said he remembers the complex got new scoreboards a few years back, but those were paid for using money from sponsorships.

City Manager Jay Taliaferro said the fields’ sod is original, and the irrigation system is too, which is getting to be a problem. Salem’s venue has become less attractive as a potential event host while newer, shinier sports centers opened nearby.

“We took a lot of the items that were on the wish list, and we found a way to mesh everything together,” St. Pierre said. “We have a vision, now we have to figure out what it costs.”

Essential upgrades to the Moyer complex include erecting a front entry sign, reconfiguring the entryway and parking, renovating the ballfields, fences and backstops as well as increasing handicap access and adding two large overhead shade structures to shelter spectators. Combined, those improvements could total up to $4 million, St. Pierre said.

“With its age, there are some very apparent issues, as well as some hidden issues,” St. Pierre said of the complex. “A lot of the infrastructure on the site has gone beyond its intended lifespan.”

Preferred renovations in tier two include renovating restrooms and concessions, adding an elevator to the scorekeepers’ tower and upgrading lighting, among other options, totaling $2 million in addition to the first tier of improvements, St. Pierre said.

“As a consultant that works across the nation, every time I go to a community, that’s exactly what they’re asking for — every single community is asking for a new complex,” St. Pierre said. “We know who our competition is, we know where the bar is.”

A third tier of renovations are supplemental upgrades that could be made to the park surrounding Moyer Sports Complex, including further parking improvements, added pickleball courts at the front of the park along Roanoke River Greenway and a reimagined, baseball-themed community playground, altogether costing up to $6 million more, St. Pierre said.

“I will tell you, I get a call probably every day asking to build some more pickleball courts,” Shaner said. “Why I thought that was such a great opportunity is because it improves our greenway also.”

Council up to bat

If the city council swings at the grand slam option proposed by Lose Design, Salem could spend up to $12.4 million to upgrade the Moyer Sports Complex, documents show. A brand new complex of similar scope would cost $16 million to $18 million today, St. Pierre said, compared to the existing facility’s approximately $2 million price in 1992, officials recalled.

The Salem City Council will soon step to the plate and decide the extent of upgrades. The city manager said time has been planned for the Moyer complex to undergo its facelift between June 2022 and March 2023.

“In our planning, we did not book tournaments, with the thought that gives us the opportunity to do work on the fields,” Taliaferro said. “This is also an opportunity for us to look at the facility and bring it into the 21st century.”

Changes should aim to sustain the Moyer complex for years to come, said councilman John Saunders.

The Christiansburg mayoral race: Change or stay the course in a growing town?

The Christiansburg Town Council is set to see the single-biggest shakeup in years and further change could occur depending on who wins the mayoral race.

In a low-key House race, Rasoul faces opposition for the first time since 2014

The chair of Roanoke's Republican committee is running in a heavily-Democratic district.

Tennessee native Tyler Lee, a Ferrum College graduate, was 28 when he was elected to Rocky Mount Town Council in 2020.

Salem’s Moyer Sports Complex has hosted softball and baseball tournaments for nearly 30 years and is in need of updates, city officials say.

Scoreboards bought using money from sponsorships are the most recent upgrade to the Moyer Sports Complex in Salem, city officials said. The complex is overdue for improvements.

The Moyer Sports Complex has four ballfields arranged in a circle with a central press box and concrete grandstands for each field.

A rendering depicts what the front entry of the Moyer Sports Complex in Salem might look like, including a "Maroon Monster" in one of the outfields. Improvements to the nearing 30-year-old facility were recently proposed to city council.